Aishwarya and Keshav at The Taj West End, Bangalore

They had dual wedding ceremonies as per Malayali and Nepali rituals. Read all about Aishwarya and Keshav’s fusion festivities at The Taj West End in Bangalore

Our series, ‘Featured Weddings’ brings you wonderful moments from weddings held at the finest venues across different cities. Here, bride Aishwarya tells us all about how she met her soul mate and their wedding celebrations in Bangalore.

About Us
Aishwarya and Keshav met when they were in high school in Bangalore. Their relationship spanned 13 years before they tied the knot. Those years included their long-distance relationship, career planning and finally the decision to get married on Jan 29th 2016, in the city where they first met – Bangalore. 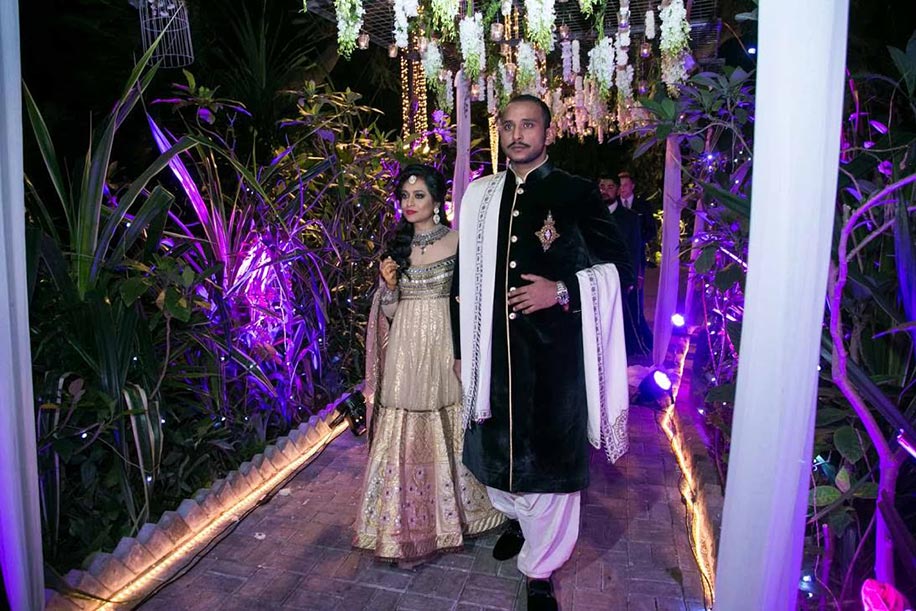 Wedding Proposal
“Keshav proposed to me on the second day of our high school, and that’s how our journey began,” shares Aishwarya. “We were in a long distance relationship for 10 years before we decided to be in the same city. Falling in love was very easy but sustaining a relationship when you are in different time zones and life phases was very challenging.”

Wedding Venue
The couple decided to tie the knot at the five-star hotel – The Taj West End, situated in the heart of Bangalore. Surrounded by natural beauty, the hotel offers magnificent rooms and suites that dot the sprawling landscaped gardens, each with a gorgeous view. Home to a range of spectacular fine-dining experiences, with flavors crafted for every palate, it serves as a perfect destination for a wedding. First opened as a 10-room boarding in 1887 by a British couple, the hotel has evolved over the years into a landmark hospitality hub, rich in history and sophistication. 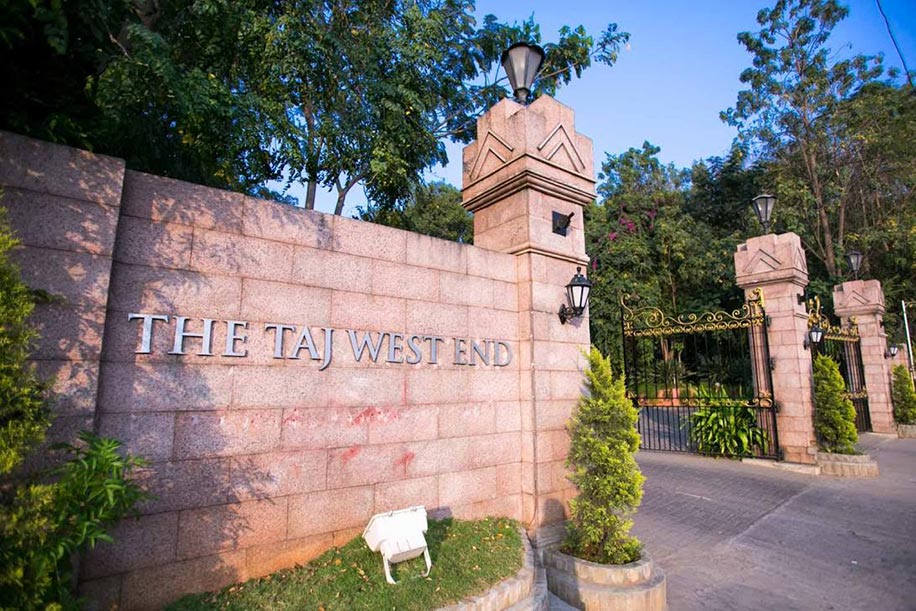 Wedding Planning
Aishwarya, who is half-Nepali and half-Malayali, had a tough choice deciding what style of wedding she wanted. Keshav, who hails from Kerala, wanted an authentic Malayali wedding. So, they decided to have two wedding ceremonies to suit both their desires, as well as a contemporary mehndi and reception.

Both also wanted very well planned functions as they had guests coming from 20 countries. They had friends who knew good wedding planners in Bangalore, and that’s how they zeroed in on Poonam Mayank Sharma, a wedding planner who was based in Bangalore. She took on the entire wedding logistics, and also coordinated with other vendors. Poonam and her team were the one-stop contact point for Keshav and Aishwarya’s wedding requirements.

Mehndi
The wedding celebrations began with a mehndi function at the poolside of The Taj West End. The bright décor in shades of yellow and orange was perfect in the wintry sunshine. From canopies to strung garlands, bolsters to brightly painted bottles on tables, everything was picture-perfect and peppy. Aishwarya wore beautiful white and yellow lehenga by New Delhi-based designer JJ Valaya, and Keshav wore a white kurta pajama paired with a maroon-red cotton stole. 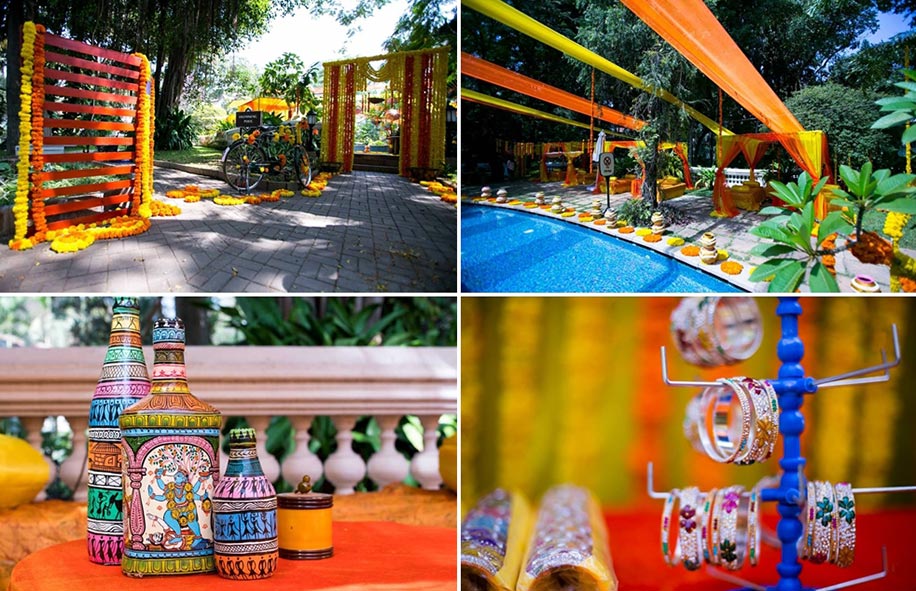 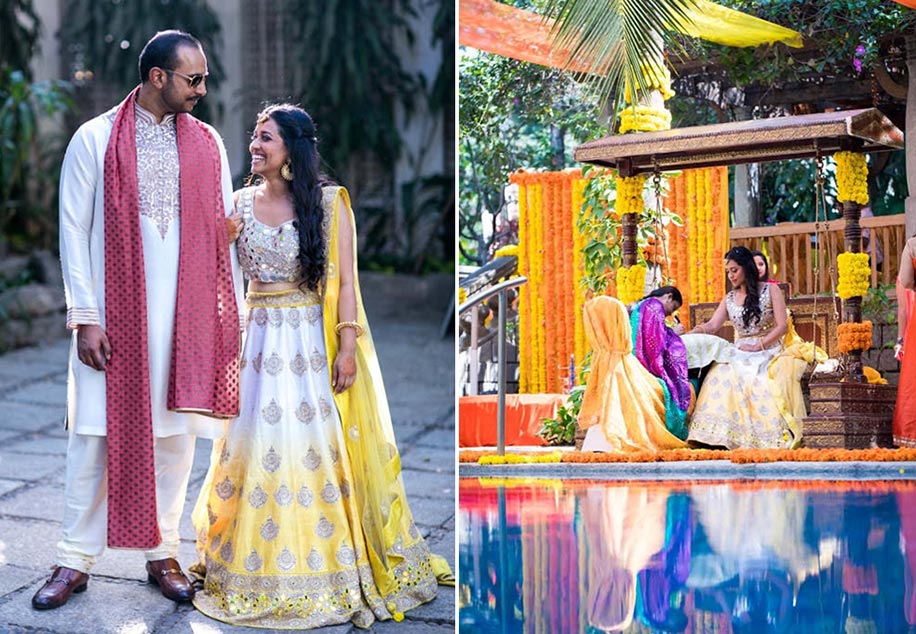 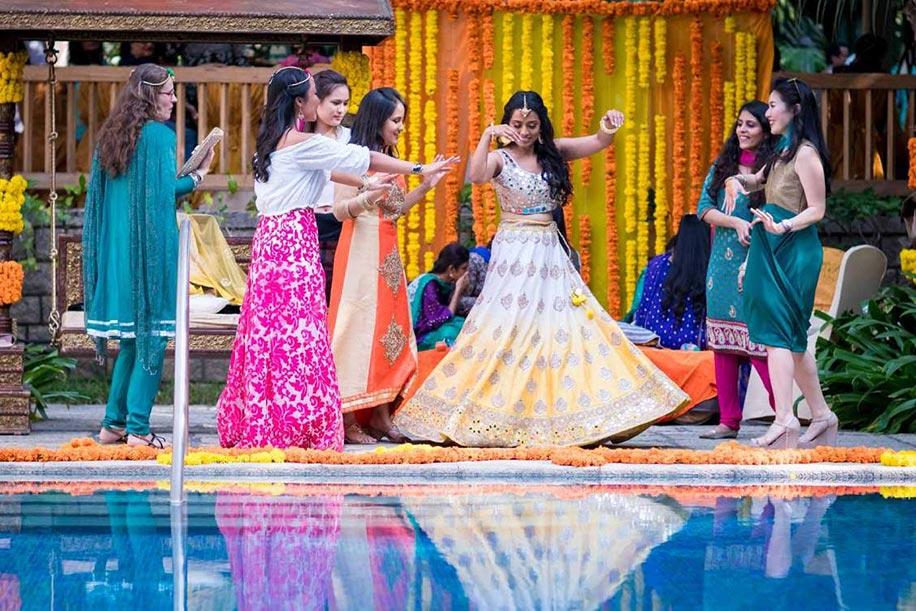 Kerala Wedding
The Malayali wedding ceremony with authentic Kerala rituals was held in the hotel during the daytime, and it was a real treat for tradition lovers with folklore musicians playing the idakka (hourglass-shaped drum), ladies dressed in Kerala saris welcoming the guests, and folk dancers performing their riveting moves gracefully. Aishwarya wore a beautiful white saree with a gold border which was paired with a bright red blouse. Her dazzling gold temple jewellery included a waist belt, multiple strands of necklaces, ornate jhumkas and a regal ‘maatha patti’ along the sides of her head. Keshav also wore a traditional groom’s outfit and this event included rituals such as Nirapara, Nilavilakku and Thalikettu. 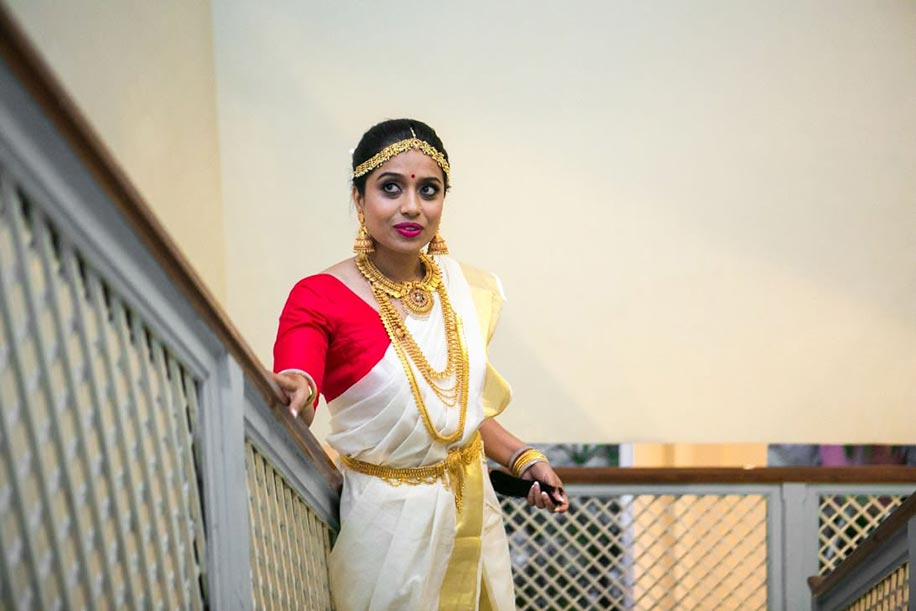 Nepali Wedding
An elaborate Nepali wedding took places the day after the Malayali daytime wedding. The contrast in the decor and ambience in between the two events was significant. The light gold and white shades of the morning wedding were replaced by a red and dark gold setting. The mandap looked like a piece of an art and was representative of Nepali culture with its stupa-like roof, tusk-pillars, and red flooring. The bride and groom were dressed in red and gold too with traditional accessories. For example, Keshav wore a traditional ‘Dhaka topi’ (hat), while Aishwarya sported a beautiful ‘maang tikka’, and both wore heavy garlands. 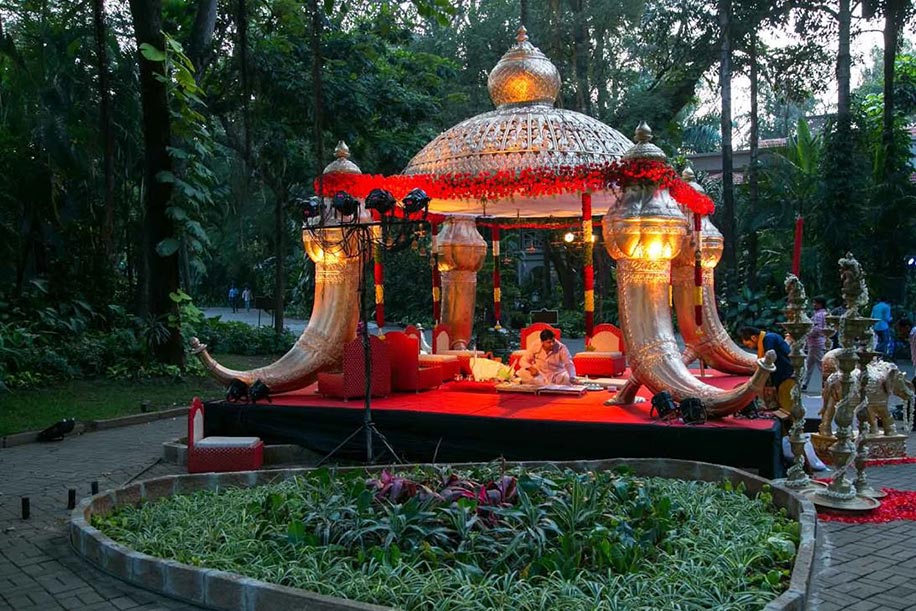 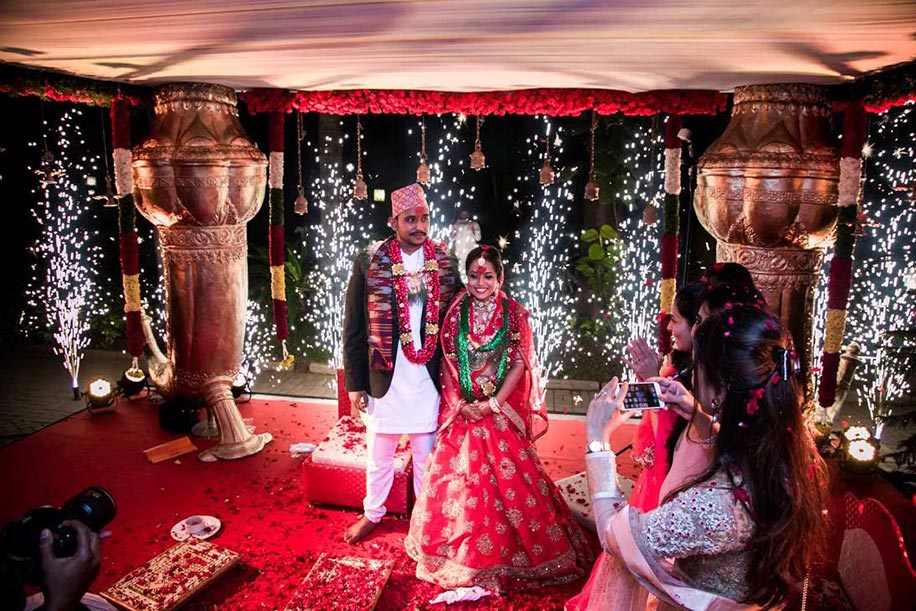 Reception
Aishwarya again went with JJ Valaya for her reception ensemble, and she looked lovely in a glittering gold ensemble with a matching dupatta. Kesav looked every inch a happy groom in his dark sherwani with a white stole and matching buttons. The reception was a grand finale to the lavish celebrations. The venue was lit up with flowers and lights artfully arranged, and the grand entrance stole the show. The happy couple was very thankful that Poonam Sharma Mayank and her team helped them pull off dual wedding events with ease, fun, and convenience. Wedding Looks
Aishwarya shares, “I wanted a very traditional look for all the functions since all the events were culturally rich. For the mehndi, which was a fun event by the poolside, I kept my look fresh by picking a white and yellow lehenga by JJ Valaya which had silver work and was paired with a mirror-work blouse.”

“The look for the Malayali wedding was that of an authentic ‘Mallu’ bride. I chose to wear a Kerala Saree with a red raw silk blouse. The look for the Nepali wedding ceremony was that of a traditional Nepali bride. The whole look was dominated by the color red. The red silk lehenga I wore was actually a half-saree, and I paired this ensemble with a choker and diamond ‘maang tikka’. The reception look was a little more glamorous with my contemporary gold lehenga by JJ Valaya.”

Advice for couples to wed
Aishwarya shares, “It is very important to research and plan all aspects of your wedding before the scheduled date. Having professional help makes events very smooth and convenient. The biggest challenge for us was to hold dual wedding ceremonies in both the Malayali and Nepali styles in the most authentic way. But our wedding planner and other vendors made this process very smooth and memorable for us.”