Aman and Bikram's wedding venue which was designed to look like a fort added a regal vibe to the festivities.

An exchange student at Aman’s school, Bikram received a warm welcome as she extended her hand in friendship. Through the years, the two exchanged numbers, hearts and eventually, vows, and their bond of over a decade culminated with a glorious wedding that honored their love. The affair was captured in splendid frames by WeddingSutra Favorite – Sunny Dhiman Photography, and Aman shares some of her fondest memories here. 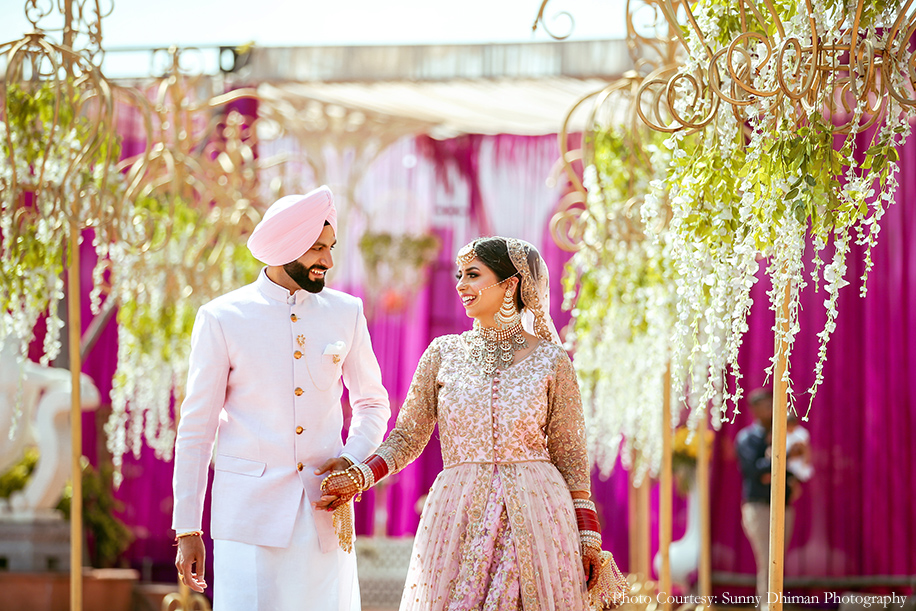 How They Met
“Bikram and I have known each other for about 12 years. We went to the same school in Germany where he was an exchange student and the only Indian beside me. Our first conversation ever was initiated by me where we exchanged numbers in case he needed something since he was new. Soon enough, our friendship blossomed, and I started liking him. While I couldn’t muster up the courage to tell him my feelings, I did manage to tell my parents about it! As good friends, we spent a lot of time with each other. When he had to move from the city, he made sure he visited me twice a month or went out on a holiday with me. Even at this point, we weren’t officially dating! As more time passed, our careers became an important part of our lives, but we never let that affect our bond, and eventually, we realized that we were meant to be.”

The Proposal
“Bikram and I had decided to go shopping and took the bus when out of nowhere he hugged me. I remember looking at his smiling face, thinking ‘Damn! What’s going on in his mind.’ Just then, he removed the ring and asked me if I would like to marry him! I gasped, holding my hands to my mouth. A part of me was stunned another part kept wondering if he was joking and I couldn’t speak! As he waited for my reply, he said, ‘Would you please say something?’ To which I replied by calling him unromantic for proposing to me on a bus and hit him playfully. Once again he smiled and asked, ‘Would you like to be my wife?’ and I said a big ‘Yes!’ I had been waiting for the proposal for five years; there was no way I was going to let this chance go! That was the first time that he kissed me and told me that he loved me! I was absolutely over the moon that day!”

Wedding Planning
“It took us almost a year to put together every little detail. My friend Sinem was of great help and was by my side at every step of the way. I had always known what I wanted my wedding outfit to look like down to the last detail. Harkiran Basra from Chandigarh was the designer who breathed life into my dreams of the perfect outfits. Bikram bought his outfits from Royalista in Ludhiana. Our photographer was Mr. Dhiman of Sunny Dhiman Photography. Bikram and I have been such big fans of his work that to have him shoot our wedding was a dream come true! He and his team are such a fun and talented bunch and having them around you on your big day instantly ups the joy of the occasion.”

Wedding
“Bikram and I wed as per Sikh rites and our wedding day was divided into two legs. The day began with a traditional Anand Karaj at a Gurdwara where we took our vows and opened up a beautiful new chapter of our lives. We left the shrine surrounded by loved ones under an ethnic canopy only to reach the post-wedding celebration at the Bath Castle. The venue is designed to look like a fort and needless to say, it exuded a royal vibe. The space was decked using pink fabrics and white flowers that were accented by foliage and golden elements. The festivities packed lots of cheer and spending an afternoon surrounded by our loved ones felt truly amazing!” 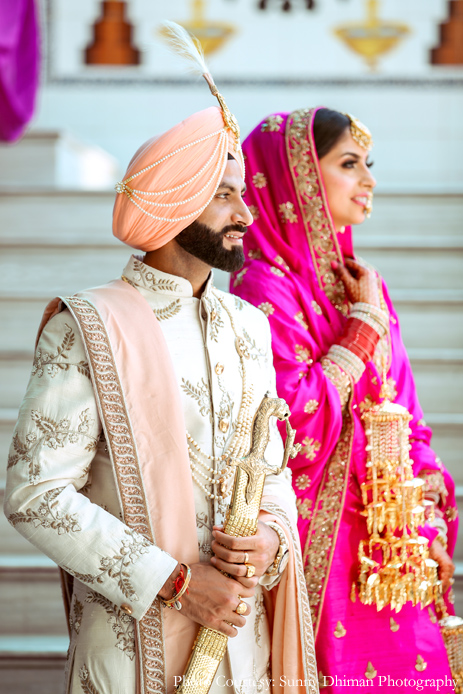 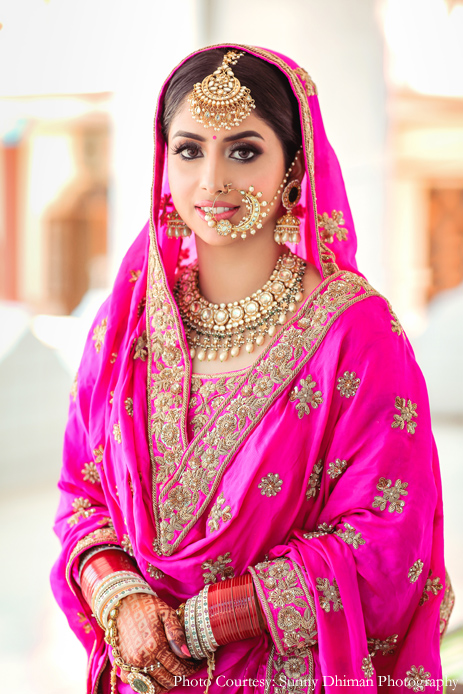 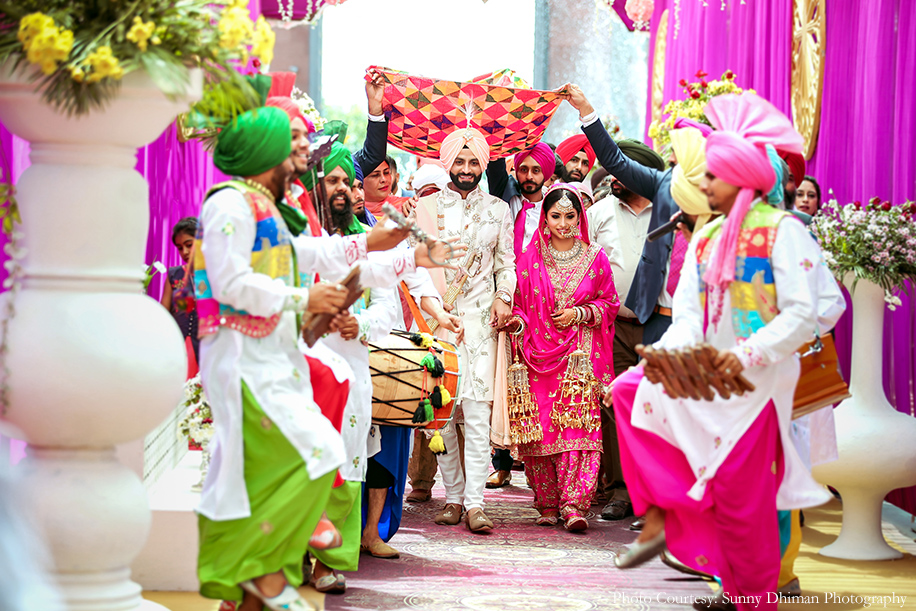 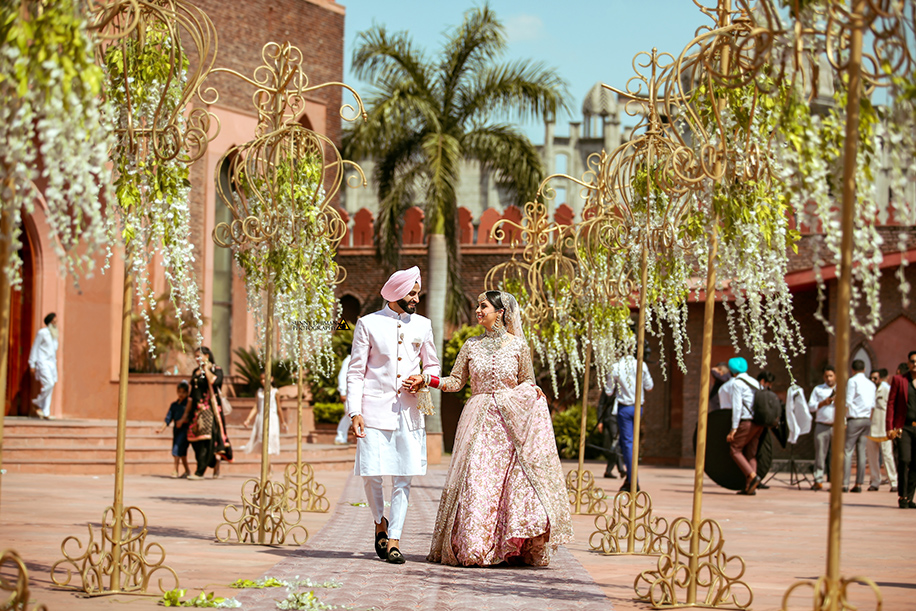 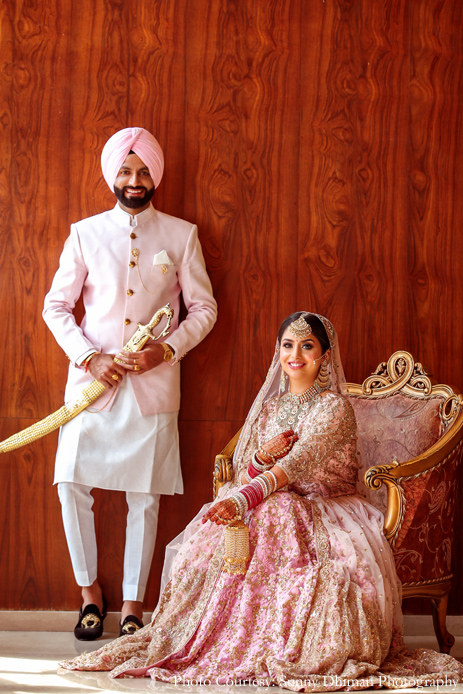 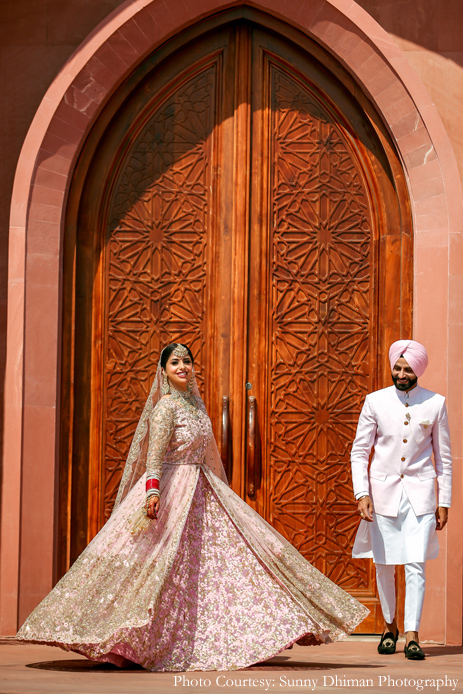 Reception
“Our reception was hosted at Festyn Era in Amritsar, and the setup was designed to look like a scene from a modern fairytale. The backdrop of the stage was smothered with flowers in different shades of pink and white, while the center included a luxurious navy blue seat for the two of us. Lots of golden lights and chandeliers were brought in to add an ethereal touch to the setting and their glow, indeed created magic.” 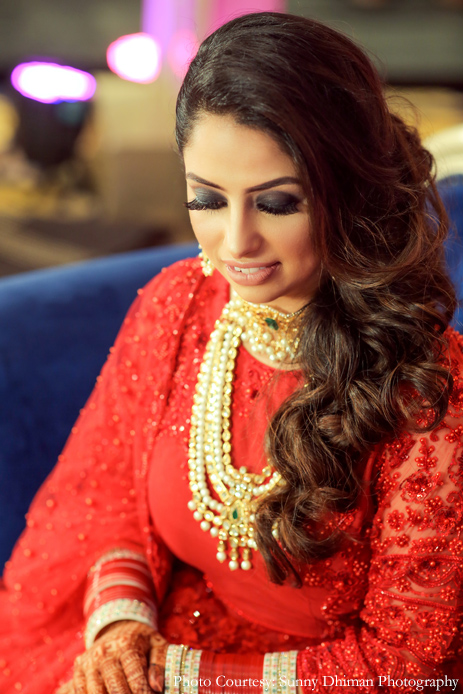 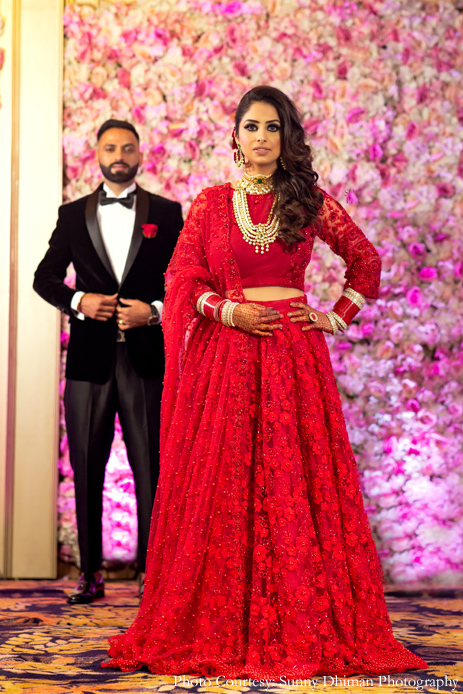