Amreen from Canada and Jaijeet from San Francisco met in India over a cup of coffee, fell in love and had a grand wedding at Stallone Manor in Ludhiana

Our series, ‘Featured Weddings’ brings you wonderful moments from weddings held at the finest venues across different cities. Here, bride Amreen tells us all about how she met her soul mate and their wedding celebrations in Ludhiana.

How we met
Our families introduced us to each other. I was working in Vancouver, Canada, Jay was in San Francisco and we were both visiting India. We intended to meet for a quick coffee but that turned into lunch, then a movie, followed by another coffee and finally, dinner. By the end of the day, we both knew.

Jay is a financial analyst, I’m a public accountant and our business backgrounds enable us to really understand each other’s professional needs and goals. 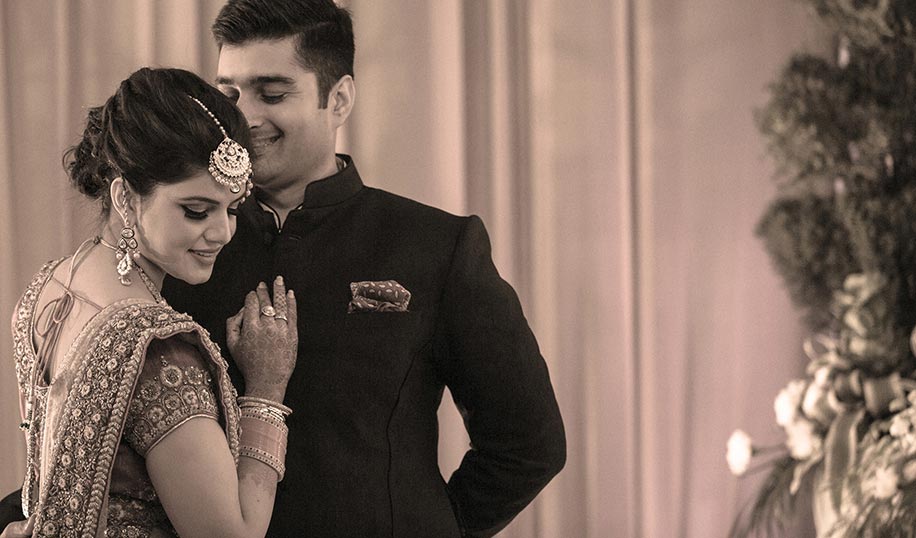 Wedding Venue and Themes
We wanted a big Punjabi wedding and so we chose my hometown as the wedding destination. We got married at Stallone Manor in Ludhiana. I wanted each function to have a different theme, so for the engagement we let ourselves be inspired by the film ‘Breakfast at Tiffany’s’. We had posters of Audrey Hepburn and used the Tiffany colour palette to create the right ambience. 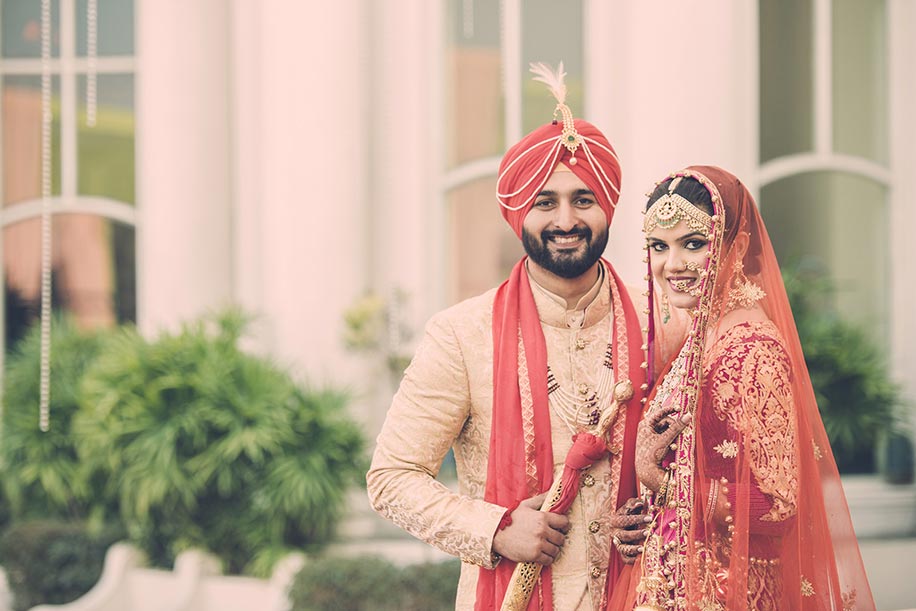 Jaijeet complimented Amreen’s heavily embroidered fuchsia and coral lehenga by Rimple and Harpreet Narula with a subtle gold sherwani by Divyam Mehta and a coral turban and stole. 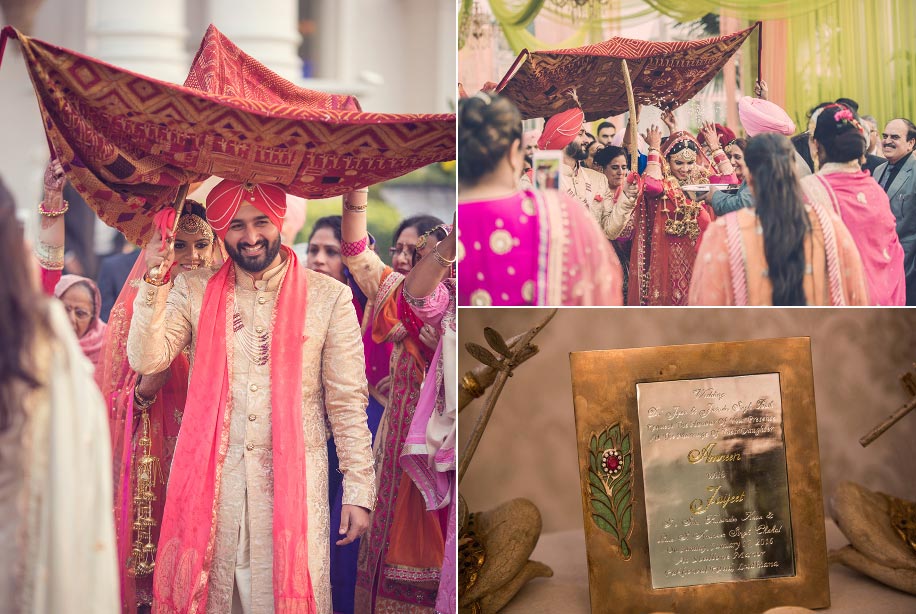 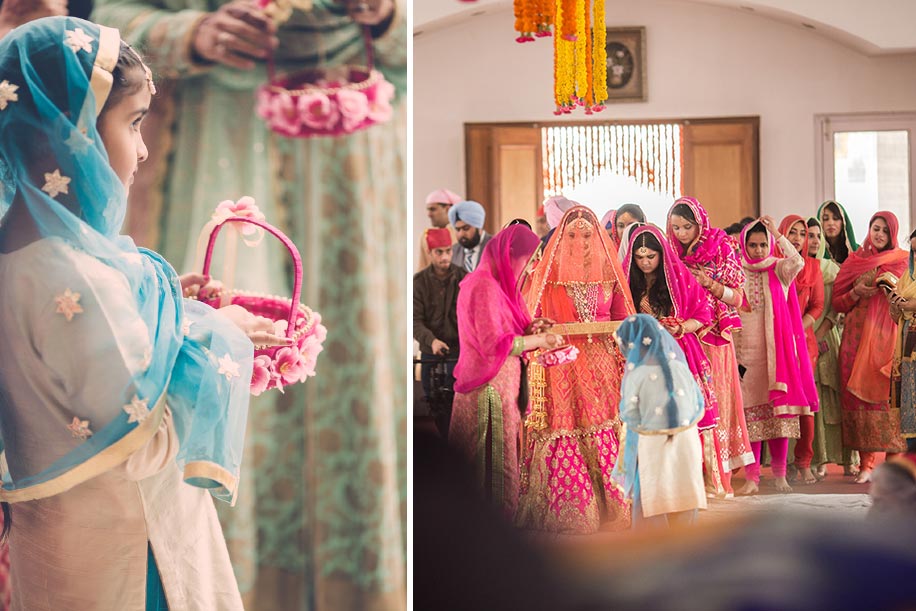 Flower girls dressed in traditional Punjabi attire walk alongside Amreen as she walked down the aisle. 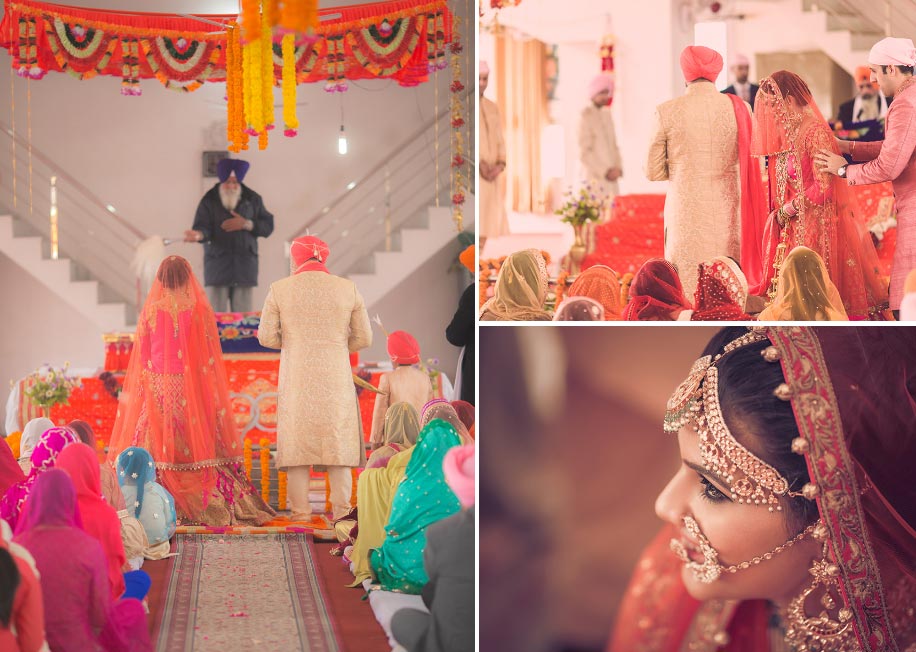 Amreen accessorized with an intricately crafted nathani and an elaborate mathapatti and chaandbalis. 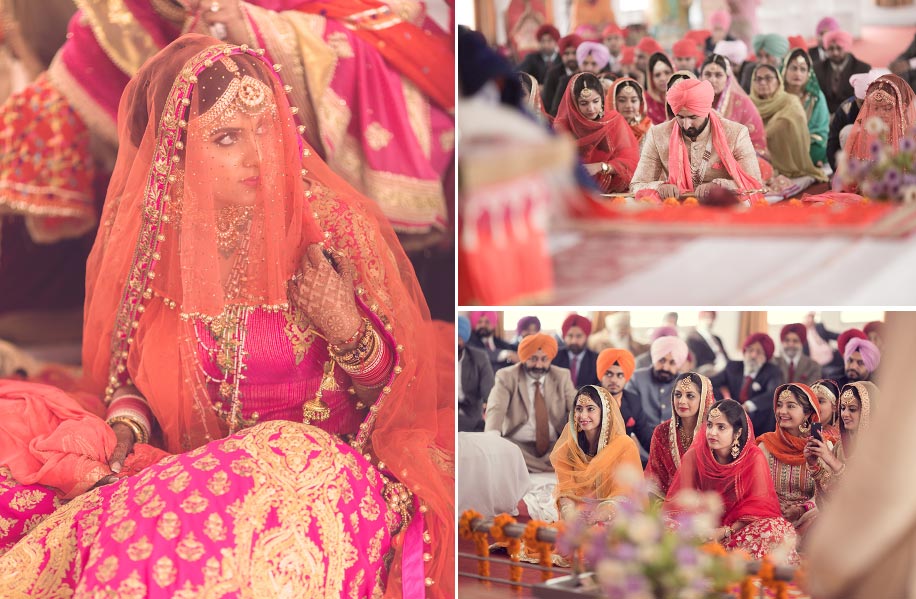 Amreen opted for a detachable veil for the Anand Karaj which matched her coral and pink ensemble. 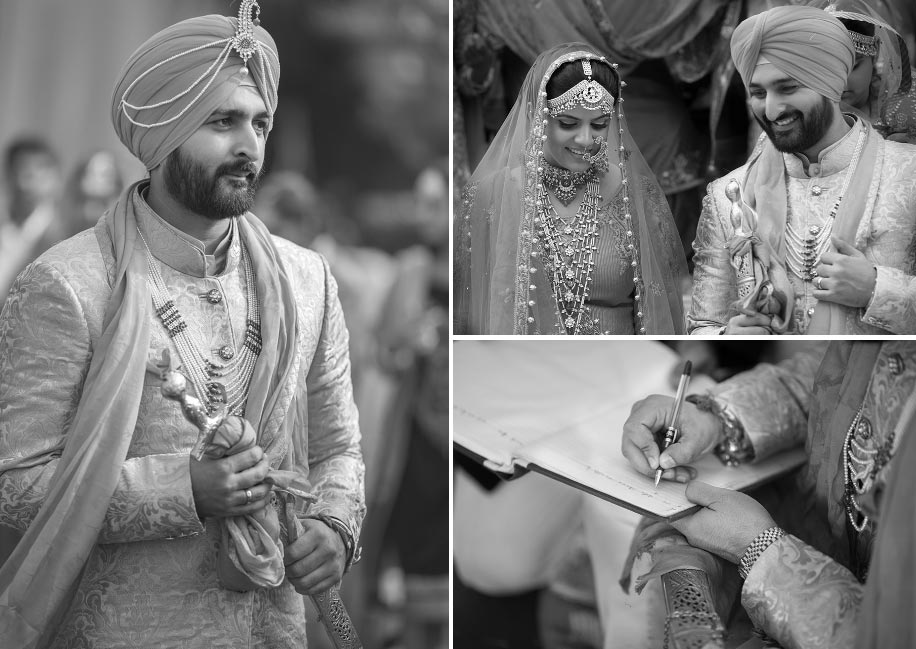 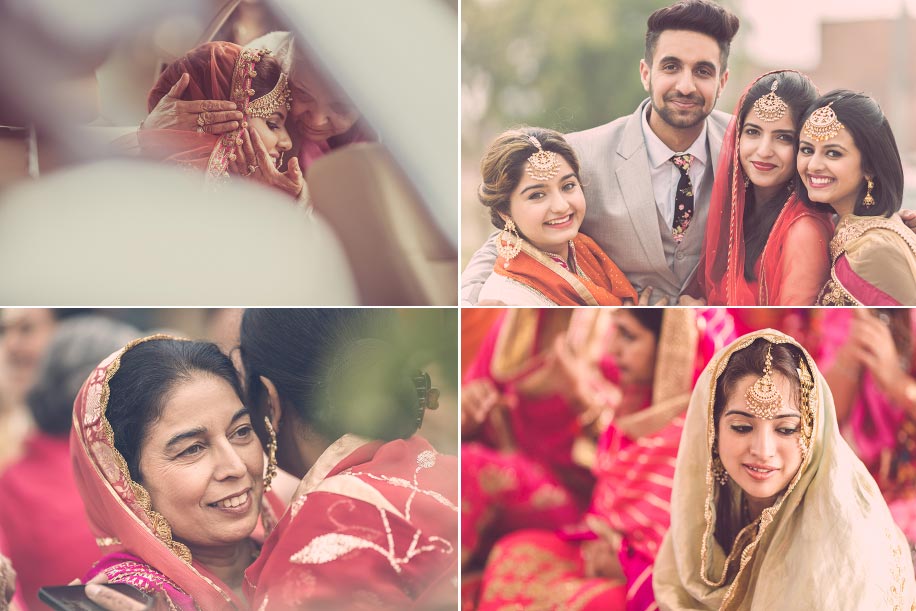 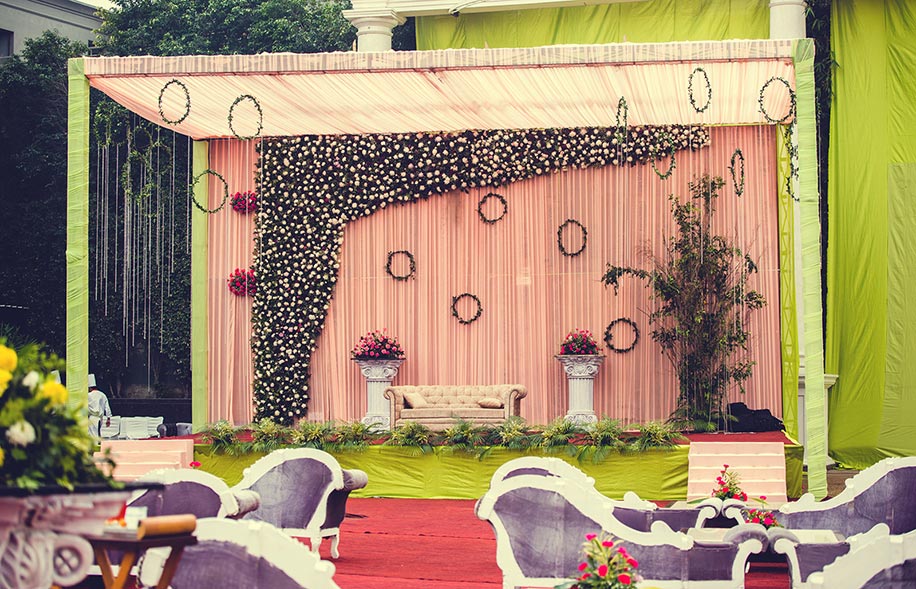 The white florals added a touch of spring to the blush themed wedding.

We wanted the Sangeet to be a fun night, so we chose a theme that depicted exactly that. We got bright and quirky; lots of colour, marigold flower decorations and a photo op area with a swing and a rickshaw. 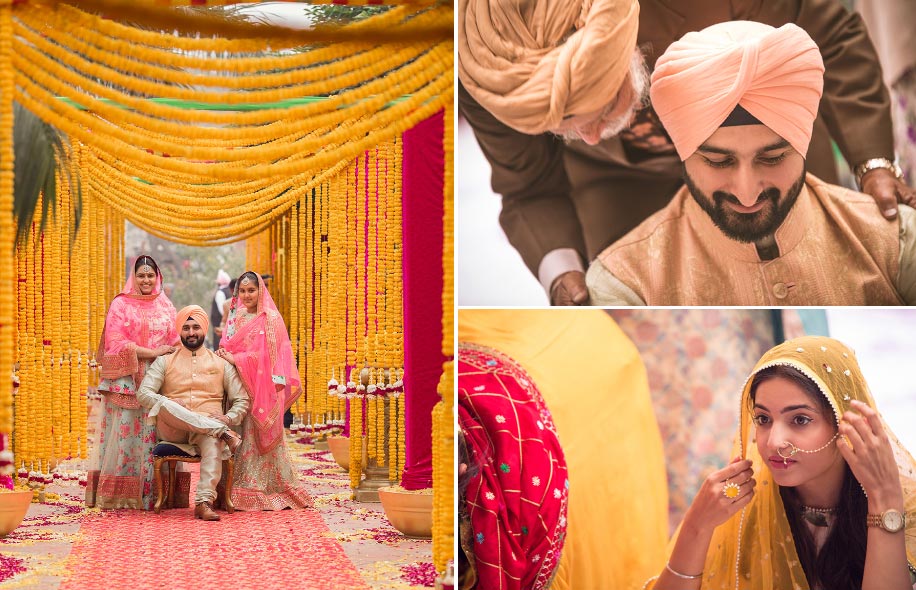 Amreen wore a blush pink creation by Payal Singhal for the sangeet ceremony.

Our wedding was a daytime event so the décor was mellow, pastel drapes, lots of flowers and a live band for a soothing, lounge type atmosphere.

After the mellow morning wedding though, we wanted to go all out at the reception. So we had two DJs, one indoors and one outdoors. The night was filled with lots of fireworks and crazy dancing!

Amreen donned the Mughal bridal look for her reception in a heavy red lehenga and accessorized with a passa and maangtikka.