Love, at first sight, is heard of, but love at first mention? Not really. However, hearing a couple of words about Amrita is all that it took before Varun found himself deeply interested in getting to know her better. Their sweet relationship grew to become a strong bond and paved the path for a grand wedding. Here are the highlights of their nuptials that took place in Mumbai 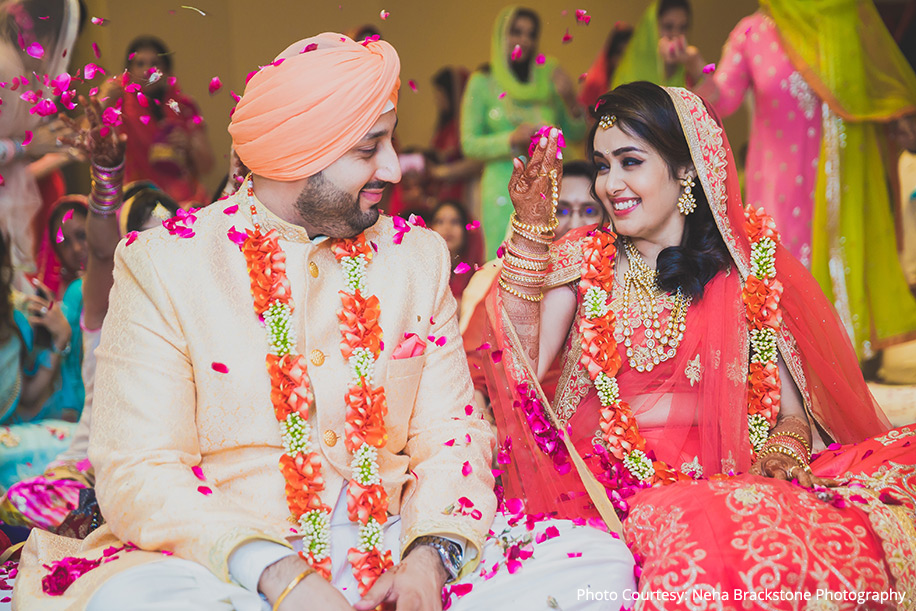 How We Met
Varun had heard of Amrita in passing from a common friend, and he wanted to find out more about her before they had even met in person. He was inexplicably drawn to her. As he was planning that, fate intervened and he got an email from the London School of Economics and Political Science (LSE), where he studied, about an event that it was hosting where alumni from the University of Berkeley, where Amrita studied, were invited to. Varun and Amrita were both on the leadership boards of their respective alumni associations. Varun made his way to that event, introduced himself to Amrita, and it was apparent to both after a few dates that they shared tremendous chemistry. They began dating, and after over a year, they got engaged.

Proposal
Varun and Amrita both love the ocean, so Varun planned a proposal on a yacht. However, he wanted it to be a private affair, so he ensured that is was just the two of them, alongside a guitarist playing Amrita’s favorite songs, a photographer, and minimal deck crew on a million-dollar, 54-foot yacht that had been chartered for the evening. Varun had notified both families of his plans in advance, so they made their way straight to a celebratory party after a brief harbor cruise.

Wedding Planning
The wedding planning was done by Varun and Amrita’s mothers along with wedding coordinator and logistics expert A Klass Apart who also managed RSVP and hospitality seamlessly.

Varun and Amrita were both clear on what they wanted: a simple, elegant affair, with guests’ convenience in mind. Oh, and with really good food. Thus they chose venues that would minimize travel time for both Mumbai and out-of-town guests and spent a lot of time on coming up with menus that both families were happy with. For the cocktail, Varun designed a personalized #VBAM17-themed cocktail menu and it was a big hit amongst the guests.

The families chose themes for each function early on, and these were kept in mind when Varun, Amrita, and their families visited Bubber Couture (where most of their outfits were sourced from) and the other designers they used.

Treasure Hunt
A week before the wedding, Varun’s friends organized a city-wide scavenger hunt, where teams were given ‘Varun-and-Amrita’-themed clues that led to various destinations across Mumbai. The last destination was a bar, where the evening ended with drinks and dinner.

Gurdwara Path
The families organized an ‘akhand path’ (recitation of religious Sikh scriptures) at a local gurudwara a week before the wedding to seek blessings.

Gujarati Wedding
This function was held at the brand-new Palace Hall Ballrooms at the National Sports Club of India and started off with a ‘graha shanti pooja’ followed by traditional Gujarati wedding rituals. The theme was traditional Indian festive – Amrita wore a customary red, cream, and gold panetar zardozi lehenga from Chamee & Palak, while Varun wore a Bubber Couture beige raw silk embroidered formal kurta paired with a maroon turban.

The decor featured a colorful and vibrant traditional Gujarati stage with two mandaps so that the ‘graha shanti poojas’ for each of the two families could be performed simultaneously. The guests were greeted at the entrance and they walked through a passage laden with white orchid cones strung from a ceiling of a wooden trellis that was interspersed with green vines. The ceremony took place against a curtain of white flowers over shimmering gold tissue that was bordered with white and red flowers. 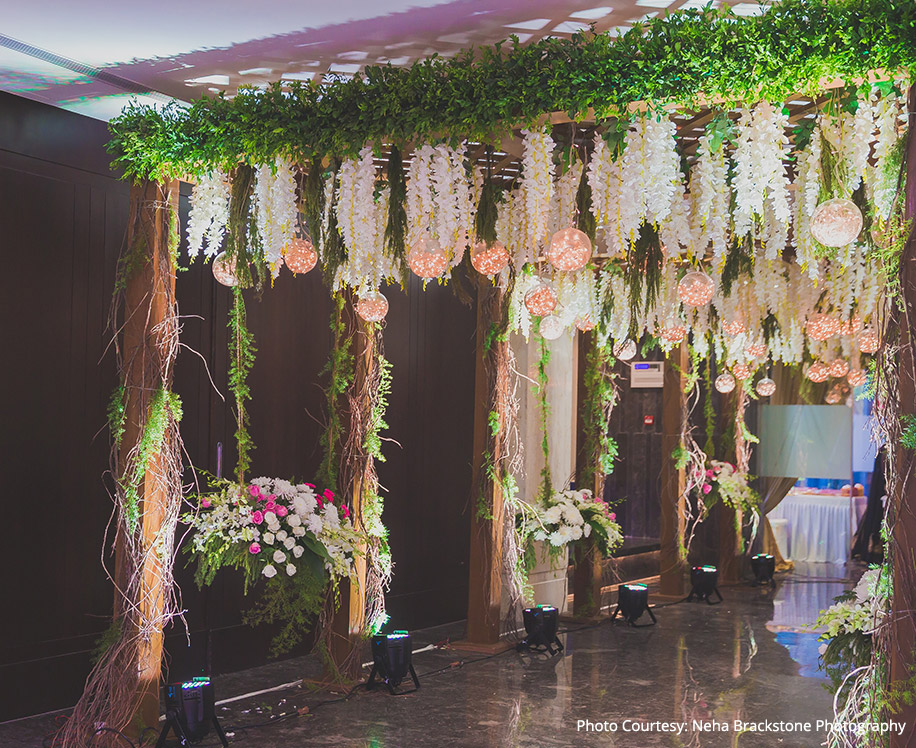 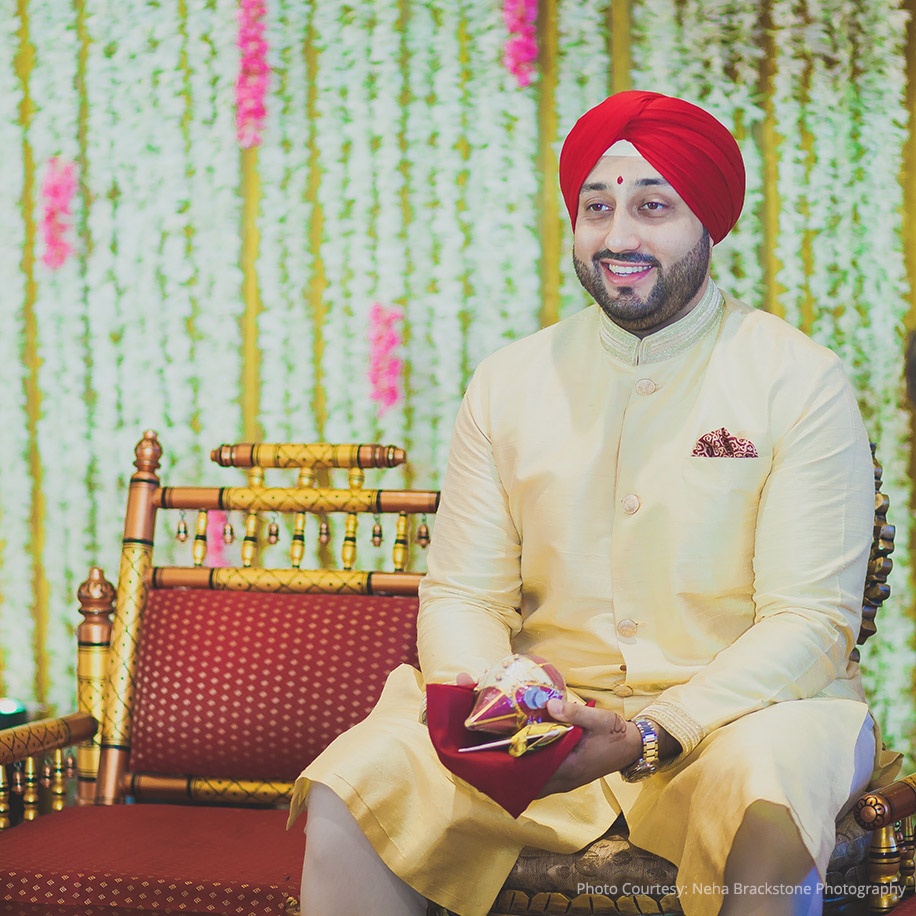 Cocktail
Varun and Amrita were keen on having a more casual cocktail as opposed to a performance-heavy sangeet, and so they chose to host it at Aqaba in Lower Parel. Amrita wore a tiered-net kasab-embroidered Indo-Western gown from Jade, while Varun wore a Bubber Couture indigo jacquard-embroidered bandhgala that the designers styled with customized gold-plated buttons.

The decor at the entrance featured a Moroccan theme with laser-cut panels decorated with orchids and hanging glass lamps. The path to the outdoor garden was lined with brass floor chandeliers with red glass shades. The highlight was a Moroccan living room-themed photo booth which had a blue and white Arabesque backdrop and gilded gold-framed mirrors. Off to the side, a giant wooden and brass treasure chest was decorated with enormous traditional Moroccan brass vases and jugs.

The evening featured only two dance performances – one by family and friends, and the other where the couple danced to a medley of some of their favorite songs. Percussionist Jonqui then took over in conjunction with DJ Amit Sanghavi, and the dance floor was packed until late in the night.

The traditional Sikh wedding took place under a canopy of pink carnations and fragrant white rajnigandha. All the groom’s guests were in pink turbans and the bride’s in red. The entrance was decorated with a one-sided curtain of white rajnigandha booms and yellow and orange marigolds. The banquet tables were decorated keeping in mind a Punjabi mela-theme using vibrant pink and orange patterns with the flowers in baby painted buckets.

After a brief ‘ardaas’ (Sikh prayers) at the wedding venue, Varun’s family met at Wink at the hotel. After an hour of frenzied Punjabi bhangra action complete with professional bhangra artistes, the ‘baraat’ (groom’s procession) proceeded up the stairs for the milni and Sikh wedding rituals. This was followed by lunch after which the couple left in a vintage Cadillac. 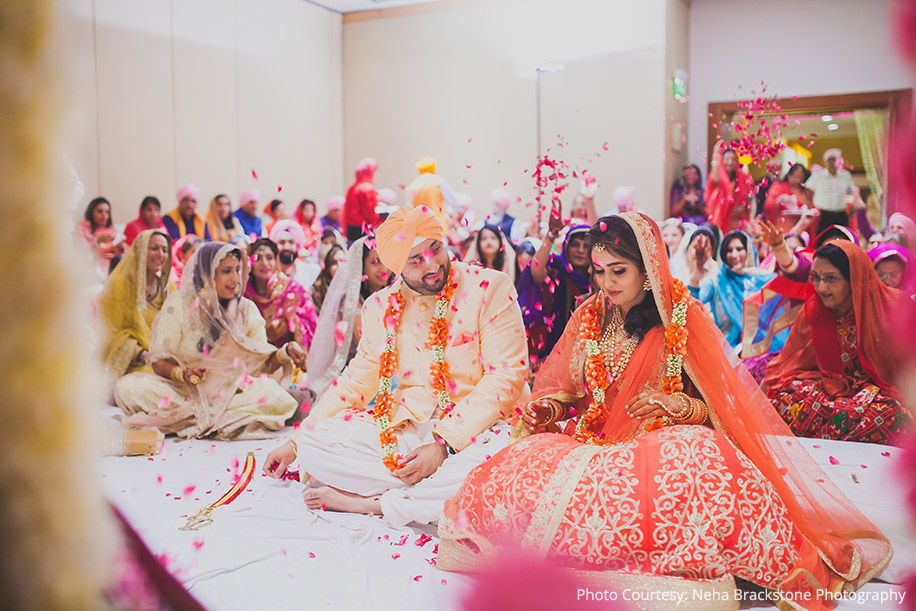 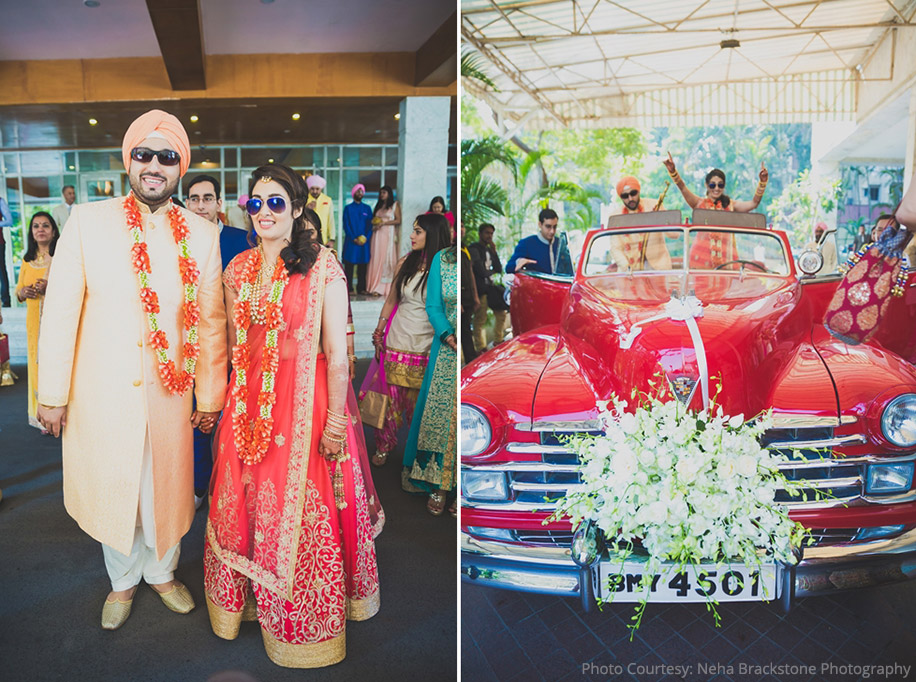 Reception
The reception was held at the National Centre for the Performing Arts (NCPA) lawns and featured a western contemporary theme. Amrita wore a baby pink and silver gown sari by Gaurav Gupta, while Varun wore a midnight blue classic tuxedo by Arjun Khanna.

The decor featured a French garden design with white and peachy pink accents to go with the colors worn by Amrita. The guests were greeted at the entrance with a white photo frame booth alongside a ladder–both decorated with flowers. Large sleeper wood gates lined the long pathway. This was covered with overhanging white and pink orchid cones, glass handi lamps, and crystal cones. The French-styled “Beau Treillage” reception stage was set out like a luxurious gazebo with a beautiful white trellis background and sleeper wood pillars laden with white orchids, pink lilies, green and pink anthuriums, carnations, roses, brambles and lots of different types of greens. Classic white Chiavari chairs were set around the banquet tables that were decorated with flowers and bedecked silver plated candle stands. 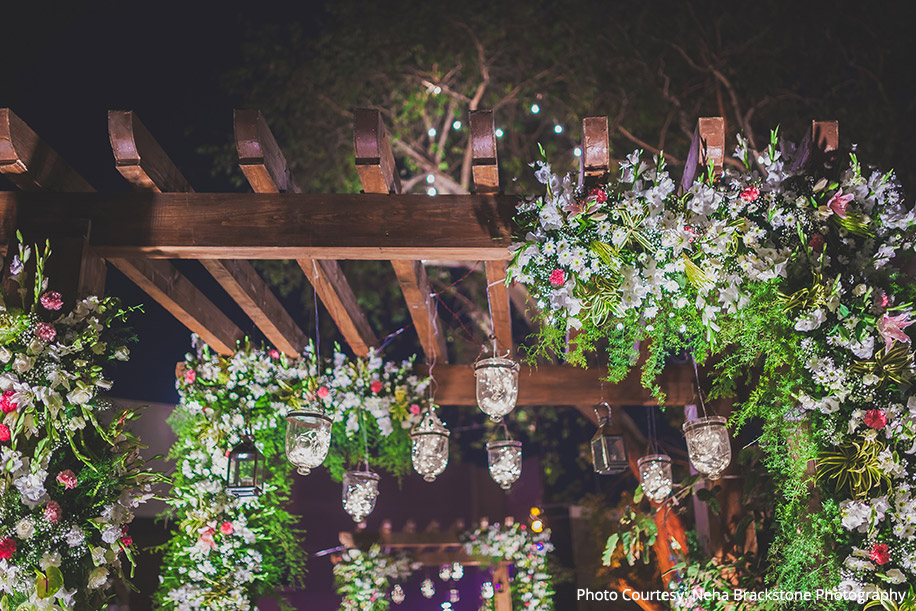 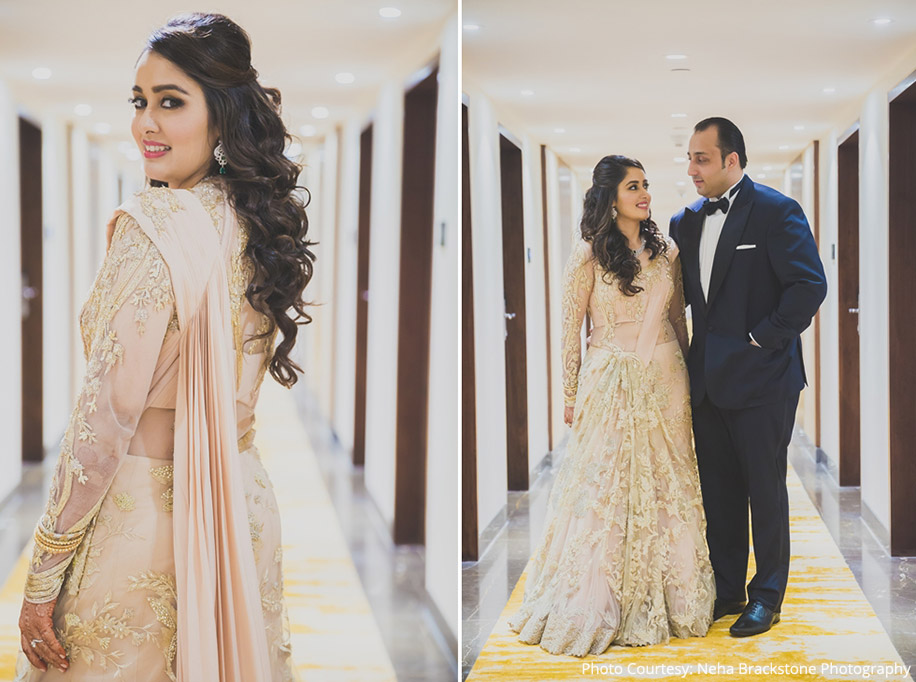 Advice for Couples
“Negotiate hard. Quotes can often be halved or lowered even more just by being persistent and shopping around. Google Docs and Sheets are a great resource to collaborate on expense tracking, addresses for invitations, and other paperwork. Figure out what matters to you and your families and focus on it during wedding preparations. Everyone has different priorities and it’s important to let your vendors know what they are. Be realistic about how long it’s going to take everyone, particularly the bride, to get ready for functions and make sure that your timelines aren’t too tight.”