After a proposal that was straight out of a romantic movie, Akshay and Garima hosted a fairytale sunset wedding at an iconic location overlooking the Arabian Sea in Mumbai.

Akshay and Garima pulled off their lavish wedding celebrations in Mumbai with the help of loved ones, and focused on glamour, elegance and tradition for their functions. Here bride Garima shares how they picked a location that offered the palace vibe which she wanted, as well as a beach one which he wanted, details on the decor by WeddingSutra Favourite Vivaah and other highlights. 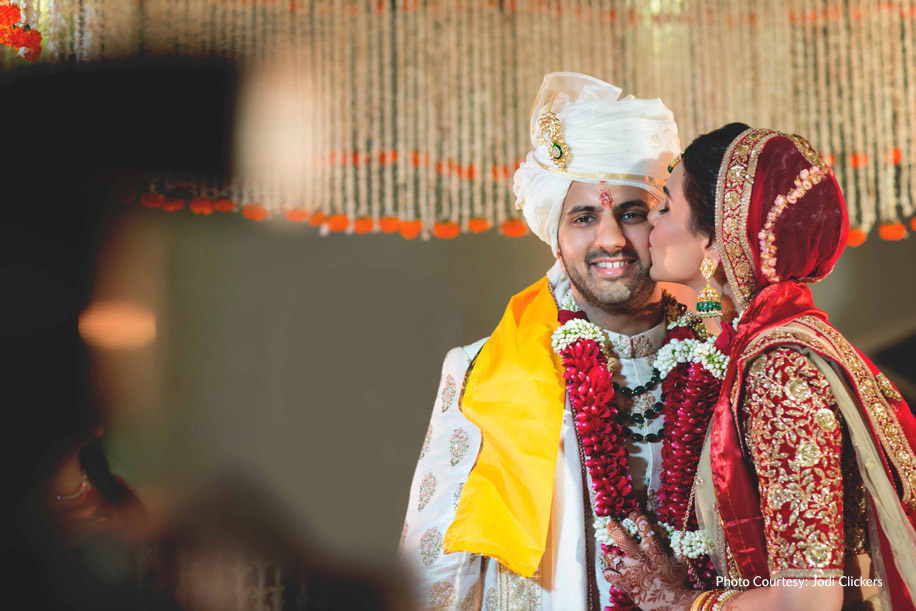 How We Met
“In the summer of 2014, Akshay and I happened to be at the same bar at the same time and got introduced to each other since we have a couple of common friends. He is the co-founder of Togglehead, a digital marketing agency, and being in the field of communication and marketing myself, we started conversing on this common subject. A few drinks later we bid goodbye, but only for the night. After this first meeting, one thing led to another, and we started going out on dates. He stays at Nepean Sea Road, and I was living in Bandra so most of the times we teased each other about the travel but still never missed a date! Gradually, we took it forward and got into a serious relationship which went on for about three years until Akshay decided to take the next big step and propose to me.”

Proposal
“In November 2016, Akshay proposed to me and it was nothing less than a mushy scene from a rom-com movie! On the pretext of watching a film on a Saturday evening, the two of us met at the PVR, Phoenix Market City, Kurla, in Mumbai. I entered the Gold Class theatre casually only to see myself on screen after the national anthem that played. Instead of a feature film, he got them to screen a cute film that he had made which showed all our best moments together. At the end of this movie, this big question popped on the screen and right beside me, he went down on one knee asking me to marry him. It was unexpected! He had booked out the entire theatre screen for us, got the management to send me a mock ticket of a show and even requested people to sit in the screen (they eventually left the hall once our movie started playing) to make it so real. Most girls have a picture of the day they’ll be proposed to; I had one as well, but, this was beyond my imagination. No roses, no cake, just both doing what we always do, creating our tales. The whole proposal was so comfortable and so unique to just who the two of us.”

Wedding Venue
“I have always wanted a palace wedding and he a beach one. We explored all options across the country to find the perfect venue but realized that we were always drawn back to Mumbai. Due to our love for the city, we decided to get married at one of the most prestigious properties in town, The Taj Mahal Palace Hotel. The history and architecture of the hotel indulged my dream of a palace wedding while its location granted him his wish of getting married by the sea. As we were getting married at the end of November 2017, an outdoor location is what we wanted, and so we decided to have our mandap at the Chamber’s Lawn at The Taj Mahal Palace Hotel which overlooks the Gateway Of India and the Arabian Sea. It was a sunset wedding, literally out of my dreams! After an intimate affair of 200 people, we then proceeded to the Crystal Room for the reception that had over 500 invitees. Besides these events, we also had two functions that were held earlier – the sangeet at the Regal Room at Trident Nariman Point, and a mehndi with raas garba at Blue Sea Banquets, Worli.”

Wedding Planning
“We didn’t hire a wedding planner as we had a core team in the family itself, and along with the help of our dearest friends we managed to put up a great, smoothly managed wedding.”

Sangeet
“The three-day celebration started with the sangeet, Akshay, who is a party animal, made sure that this would be a bash that would be talked about for weeks to come. Starting with the decor – we wanted a very chic and classy look, so the entire ballroom was draped in black and gold with a hint of red. Lighting was extremely important for the two of us, so we used led lights on the stage backdrop in geometric shapes. The highlight of the room was the 20-feet long bar that had bulbs and crystals above it, making it stand out even in the wee hours of the morning when there’s minimal lighting in the room. Mirrors, red roses, and candles stood as centerpieces on the roundtables. We refrained from excessive use of florals at this function to keep it unique from the others that were to come. A cake cutting was followed by a ring exchange and with this began the lineup of some amazing performances by our family and friends. For this function, I wore black and golden lehenga by Shyamal & Bhumika while Akshay opted for an outfit by Manish Malhotra.” 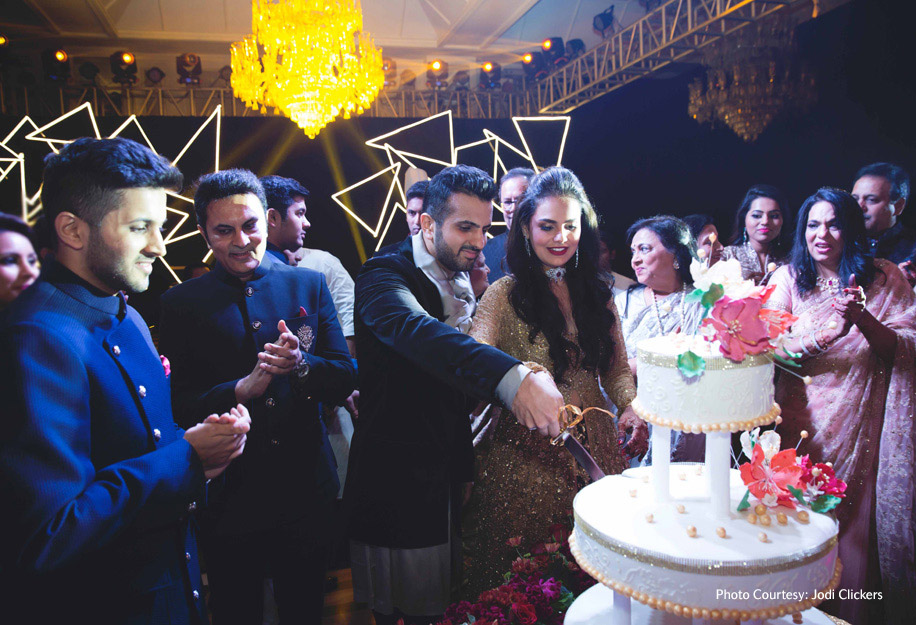 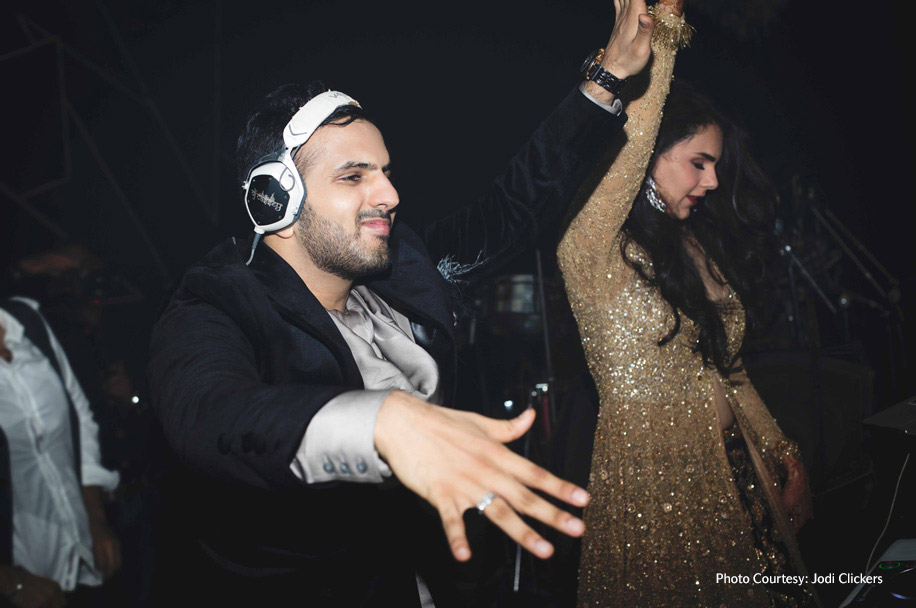 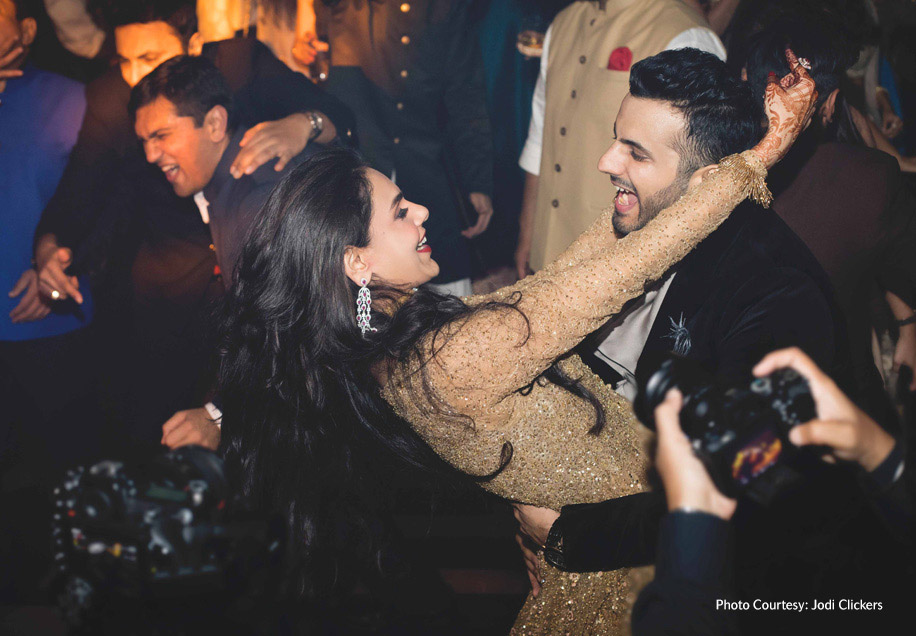 Mehndi and Raas Garba
“The second event was the mehndi and raas garba at Blue Sea Banquets in Worli. As we’re are Gujarati’s we also had a small ‘chunari’ and ‘mosalu’ ceremony at the function which was followed by the garba and then, an after party. Since the function was in the late evening, we wanted the look of the venue to be very fresh and went with the theme of lime green, yellow and a pop of hot pink. Tassels, kites and a geometric dance floor decorated the venue and yellow florals comprised the backdrop for the couple’s seating. We also had a fun bar with lanterns and kites. Multi-colored dandiyas (wooden sticks used for the traditional Gujarati dance called ‘garba’) and even more colorful outfits added to the mood of the function. I donned a colorful creation by Ekaaya for the mehndi and raas garba, while Akshay matched my look with a bright yellow ‘bandi’ jacket and kurta from Shantanu and Nikhil.” 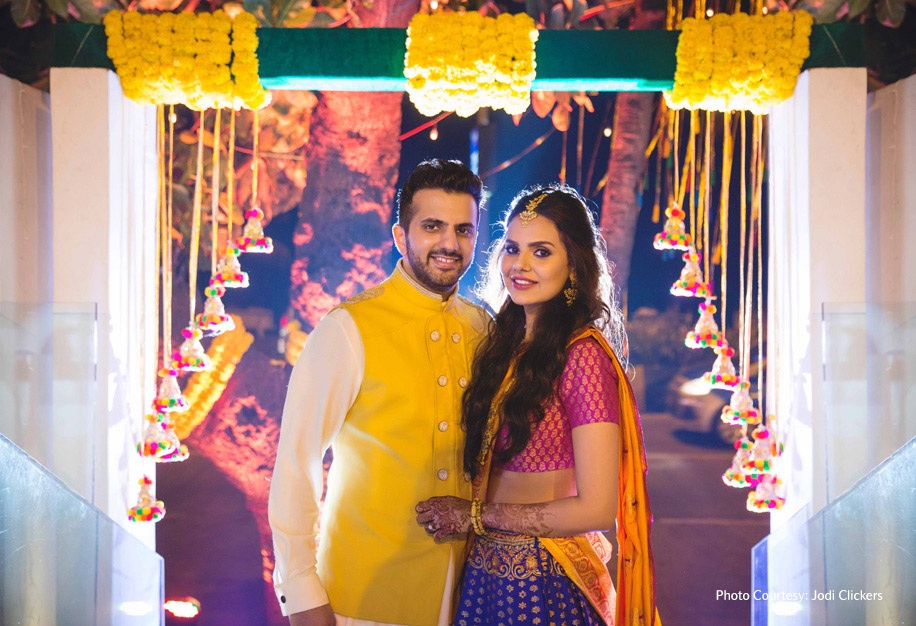 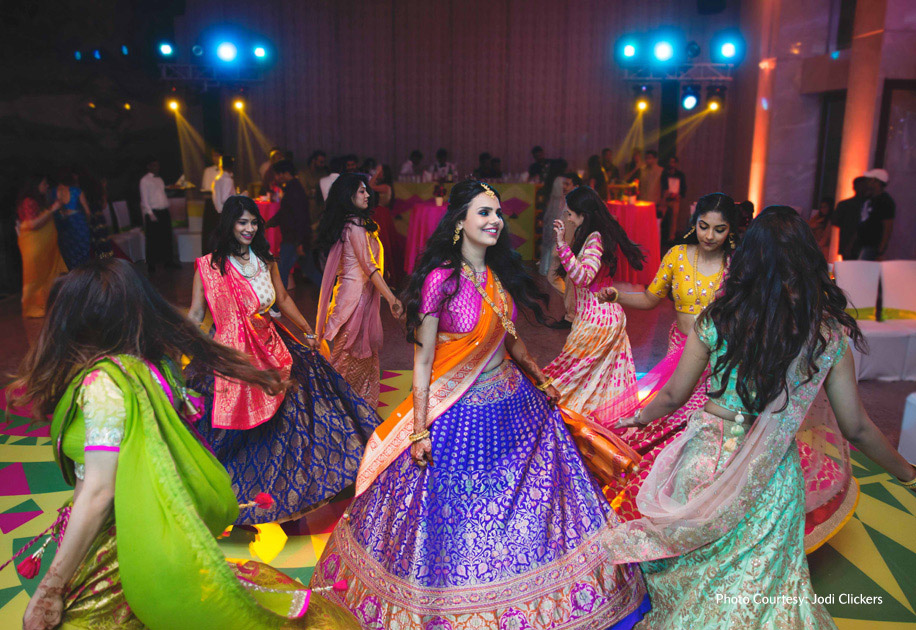 Wedding
“For the most important day of my life, my wedding day, I wanted the entire look and feel to be very traditional and elegant. Since the venue itself outdoes most in the city, we didn’t want to overpower the existing architecture and look of the location. We kept the decor minimal with a 12ft x 12ft mandap that was decorated using orange marigolds and rose petals and was surrounded by brass. The pillars of the mandap were also brass with carvings on it. We wanted a temple look for the entire setting, and it’s exactly what we got. As the sun set and we took our seven vows. There was something extremely pure about the ambiance. Swapnil Mistry and his crew sang traditional wedding songs as the pandit performed the rites. I didn’t want a ‘bidaai’ (bridal farewell) ceremony, so we took off from the mandap to freshen up and go for the reception. We both wore ensembles by Sabyasachi for our wedding. I was a traditional bride in red while Akshay wore wear a white sherwani.” 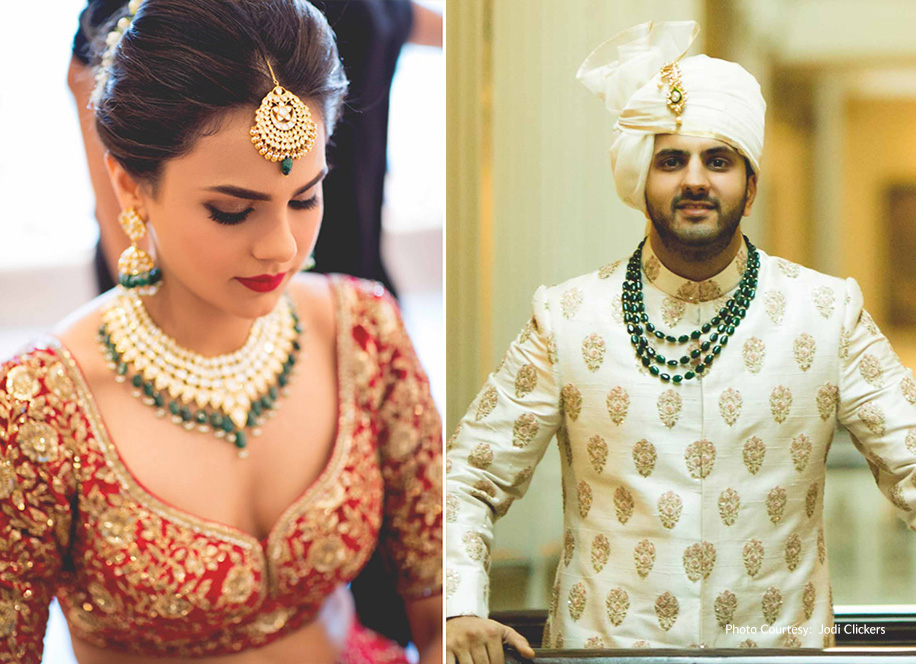 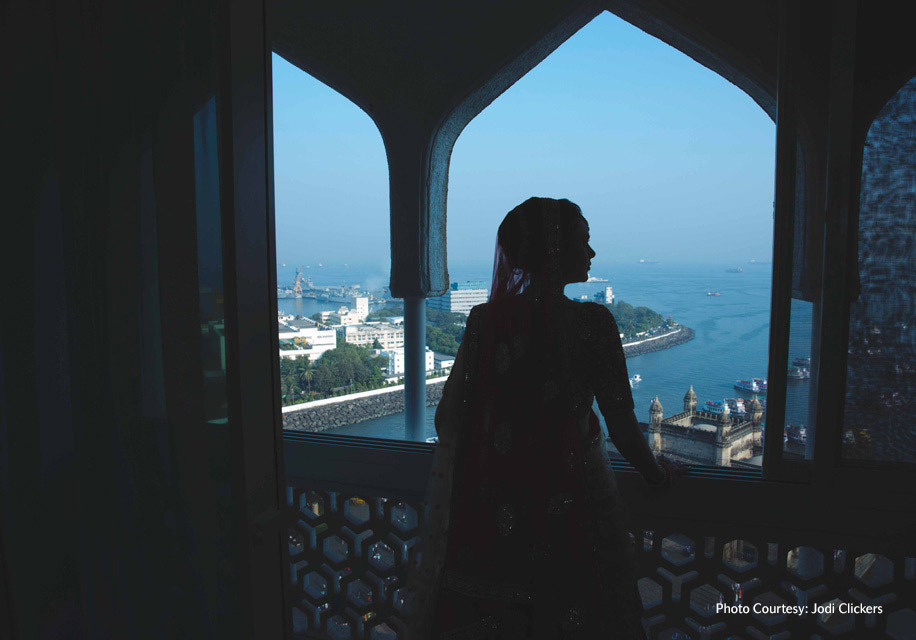 Reception
“As the wedding ceremony was extremely traditional, we decided to give the reception a Western vibe with imperial looking tables all across the Crystal Room. White florals with hints of pink were an integral part of the decor this evening, and magnificent chandeliers of the room played up the glam quotient of the room. The couple’s backdrop also boasted of additional chandeliers that added extra charm to the venue. We wanted soft music in the background, so we had a three-piece band with a giant white piano that played instrumental versions of the latest and classic Hindi and English mixes. We didn’t want a traditional stage reception with photographers, and so we set up an area that looked like a lounge to keep it slightly informal and interactive for the guests who came to greet us. After this, we had a sit-down dinner arranged back at the Chamber’s Lawn for immediate family to celebrate our union. The set up was simple with candles, flowers and name tags.” 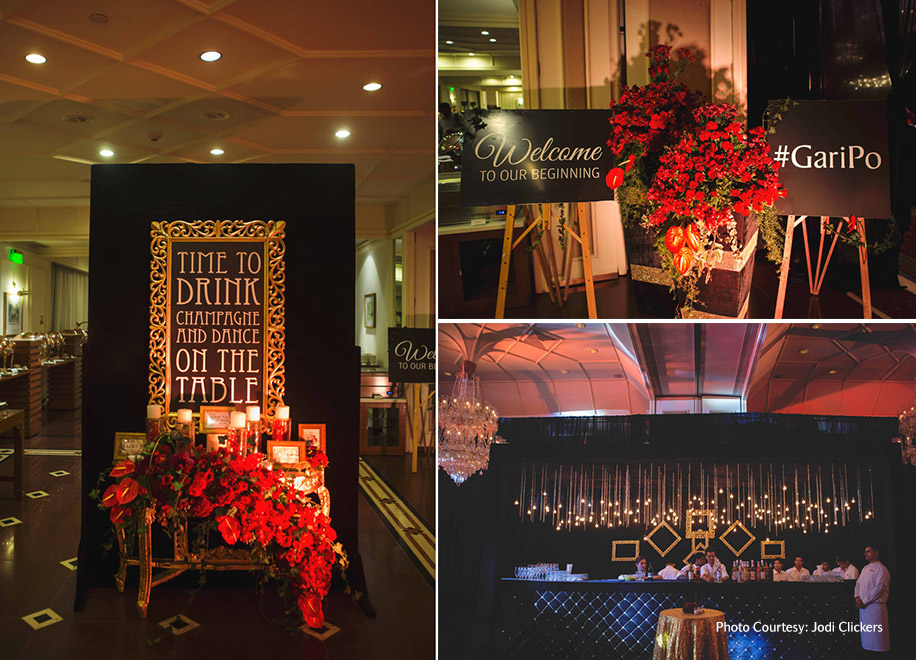 Advice for Couples
“After the months of stressful planning, just remember to have a blast and enjoy every moment of the function. You’ve put enough effort through the months in planning for the best days of your life – so when the time comes, enjoy it to the fullest. It’s your day, and it’s never coming back!”