With an entryway constructed with fairy lights, this couple’s wish to walk under the stars came true on their cocktail party night.

Showcasing the rich heritage and the timeless traditions of Punjab, Isha and Udit tied the knot in their hometown of Ludhiana. Replete with dance, laughter, and music their union reflected their vivacious personalities which were expressed perfectly by WeddingSutra Favorite – BMP Weddings who with their meticulous attention to detail and flawless planning ensured that the nuptials went ahead without a hiccup. Capturing their blissful yet grand wedding in unforgettable frames was WeddingSutra Favorite – CineLove Productions who with their superior skills behind the lens seized a plethora of emotions in each shot. Wedding Planning
Acknowledging the importance of having seasoned vendors on their team to execute a glitch-free wedding, the duo entrusted the planning to BMP Weddings who tackled every challenge head-on. Describing the brief they received from the couple and the thought process behind their planning, Raghubir Singh, Founder at BMP Weddings shares, “Isha and Udit, both, were very clear about the kind of wedding they wanted. For them, hospitality was of optimum importance along with traditions since Udit and his family are based in Ludhiana. To translate their vision into reality, we kept in mind the rich heritage of Punjab and made sure to add a touch of tradition to each celebration.”

Completing the team were CineLove Productions who with their unbridled creativity and continuous dedication captured the essence of each moment in stunning candid shots to cherish for a lifetime.

Weddings Functions
Jaggo
Reflecting on the vibrant Punjabi culture, the Jaggo night was held at the groom’s residence and was adorned with shimmering lights and a multi-hued ceiling. With the pre-wedding excitement palpable in the air, the ceremony was full of dance and music as everyone shook a leg to Punjabi folk songs and the beats of the dhol. Furthermore, the groom’s friends also enjoyed themselves to the fullest with an entertaining game of poker amidst the celebrations. Mehndi
A ceremony brimming with bright colors, the Mehndi and Sagan witnessed everyone uniting to bless the couple as they embarked on the journey of a lifetime. On the decor front, tassels and marigold blooms dominated the venue. And, acting as the perfect photo op spot was a wall embedded with a logo crafted out of marigolds. 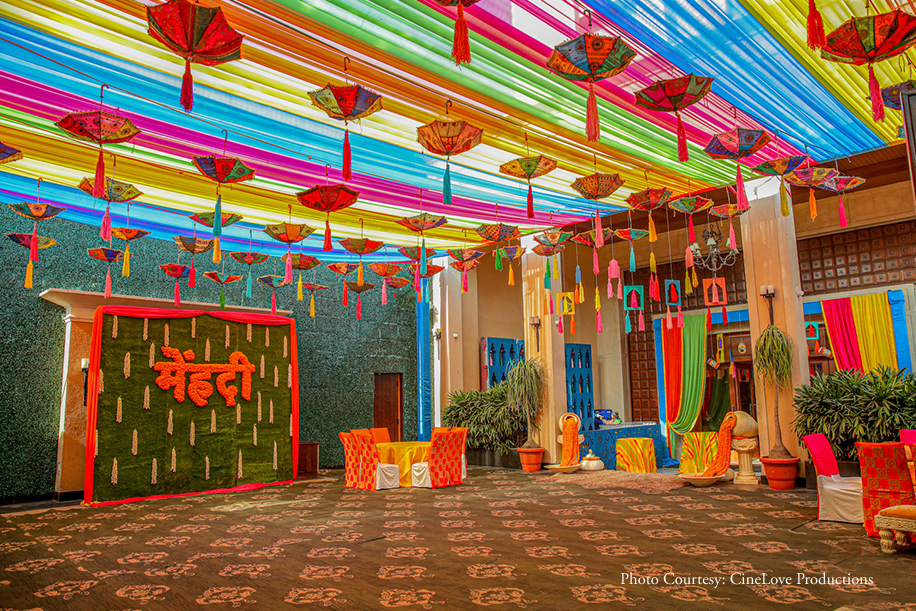 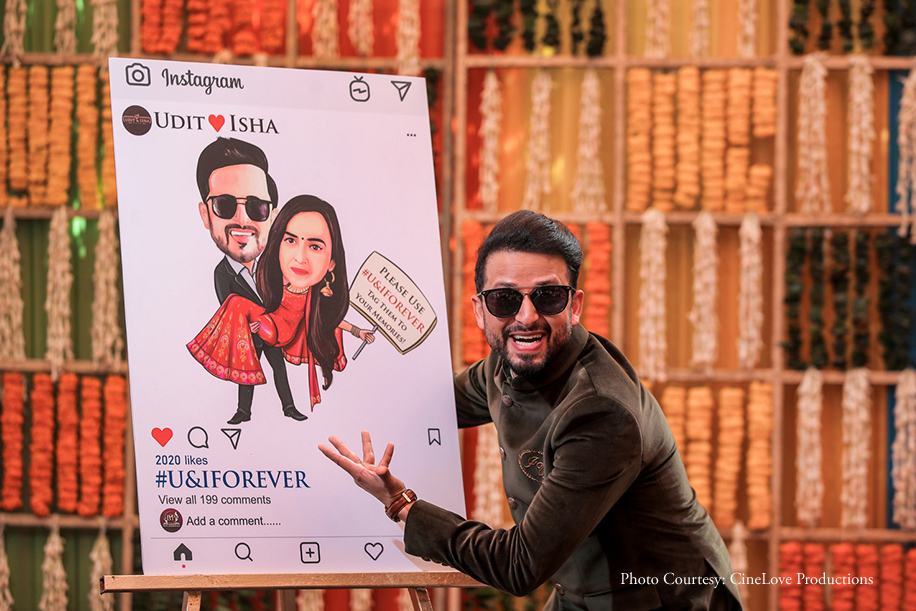 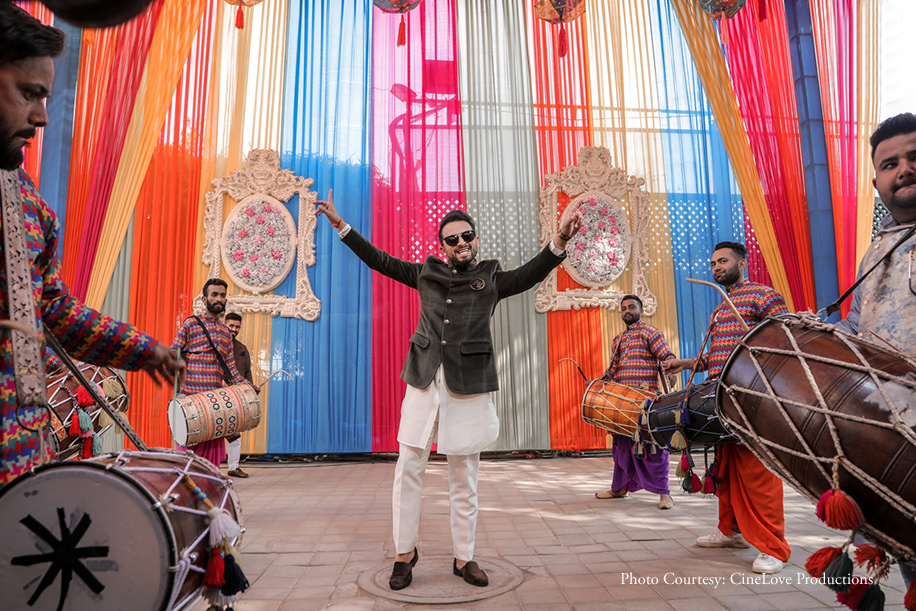 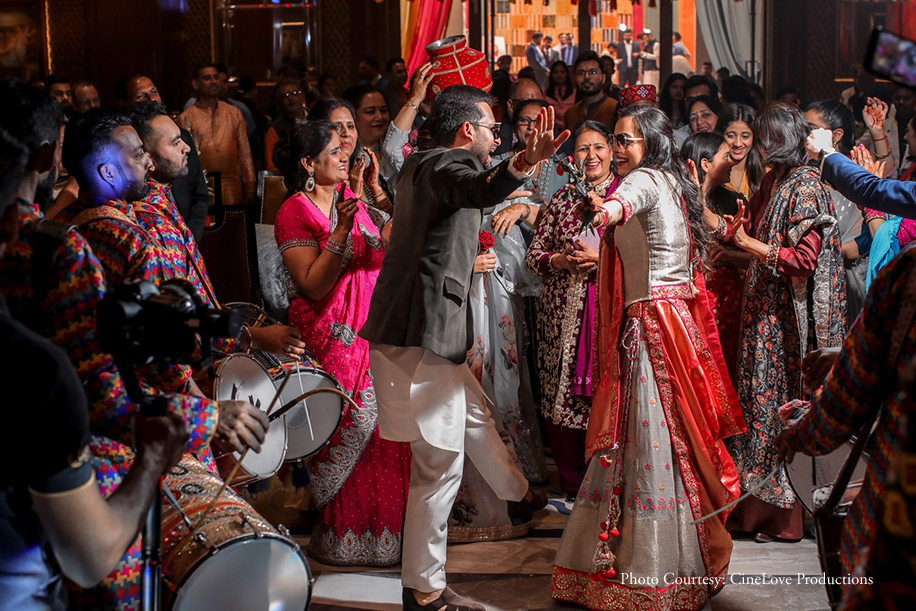 Cocktail
Giving the glamor stakes a healthy boost, the cocktail night was a dazzling and boisterous affair where the couple and their guests took the dancefloor by storm. Following a deep blue color palette and equipped with a stunning entryway crafted out of fairy lights that glimmered brightly under the dark velvet sky, the couple’s wish to take a stroll under the stars came true. And, adding a dash of energetic music into the mix was Tamasha – The Band who had everyone grooving the night away.

However, the highlight of the evening was Isha’s surprise performance onstage that prompted Udit to leave his seat and join his bride on the stage. Haldi
A close-knit and playful celebration, the Haldi stayed true to tradition with its minimal decor that consisted of marigold blooms. Celebrating the last days of bachelorhood together, both Isha and Udit had their Haldi ceremony side by side where their friends and family smeared them generously with turmeric to get them glowing for the big day. 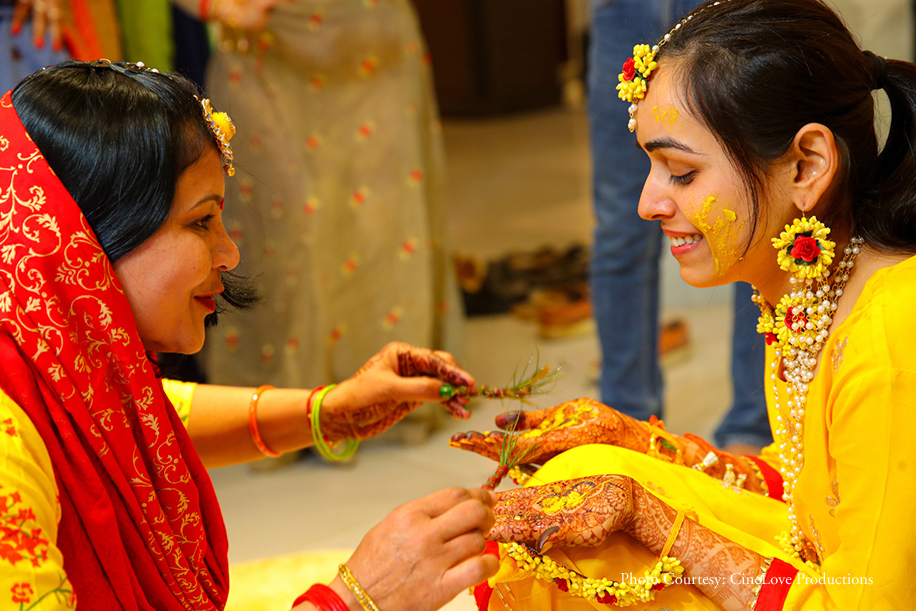 Wedding
Exuding grandeur and shining brilliantly under the night sky, the duo chose a ‘Kashmiri carpet’ inspired backdrop to enhance their wedding decor. However, for all the other elements of the decor, they took a distinctly traditional route by choosing red and off-white hues that contrasted perfectly with the elegant vintage furnishings. Additionally, crystal chandeliers, lanterns, and a plethora of fairy lights cast a golden glow over the couple as they strolled down the aisle to exchange garlands. 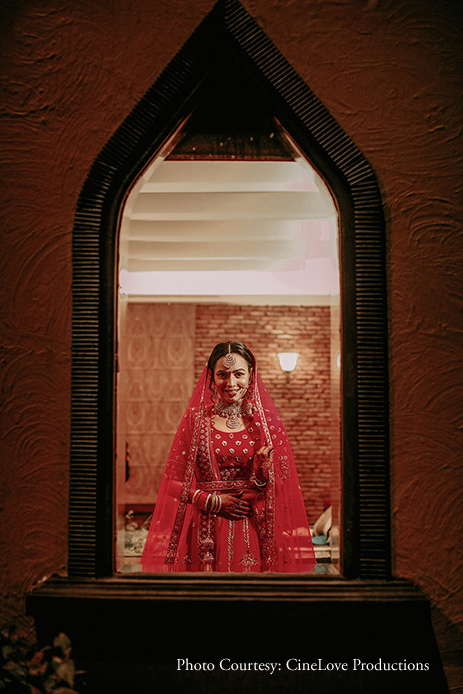 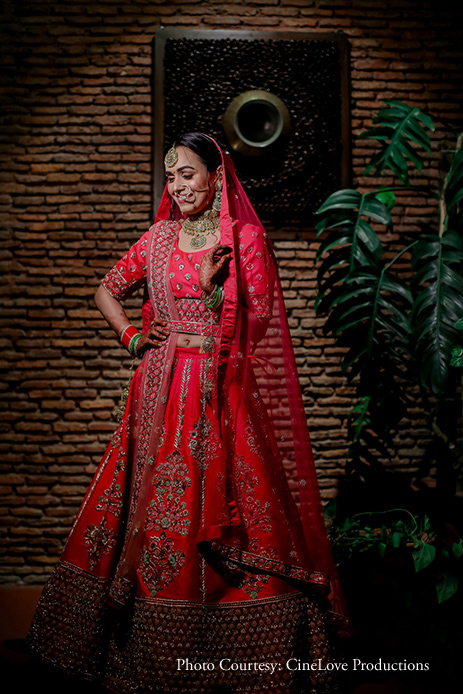 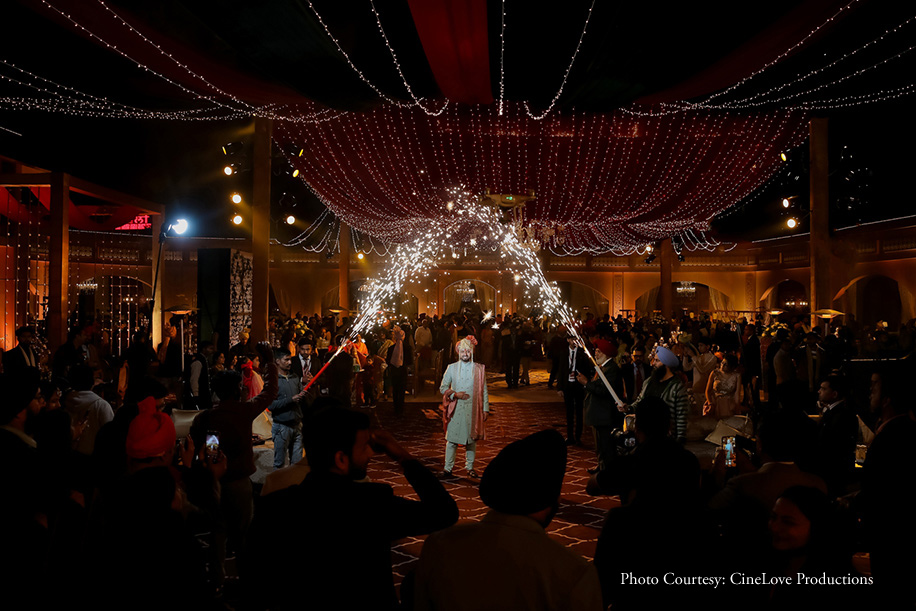 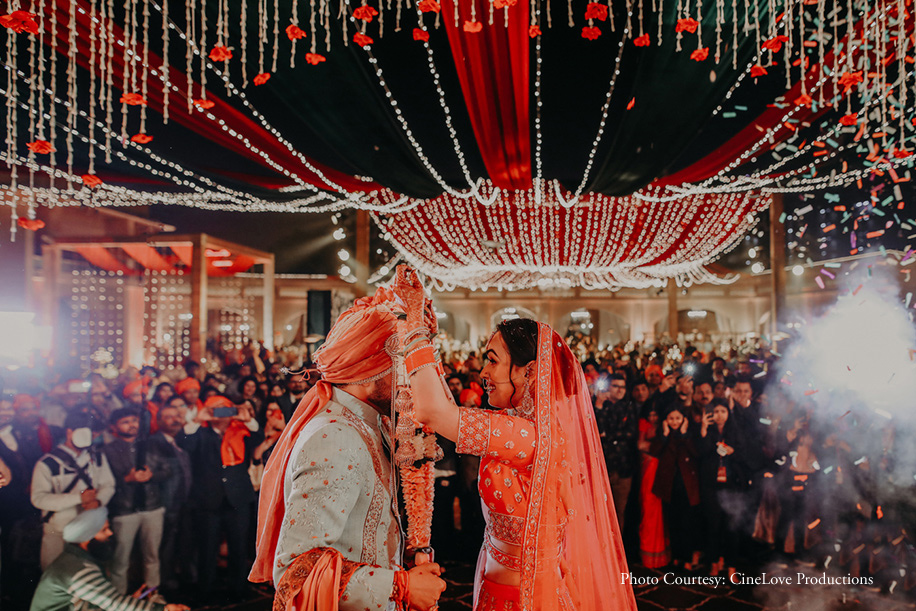 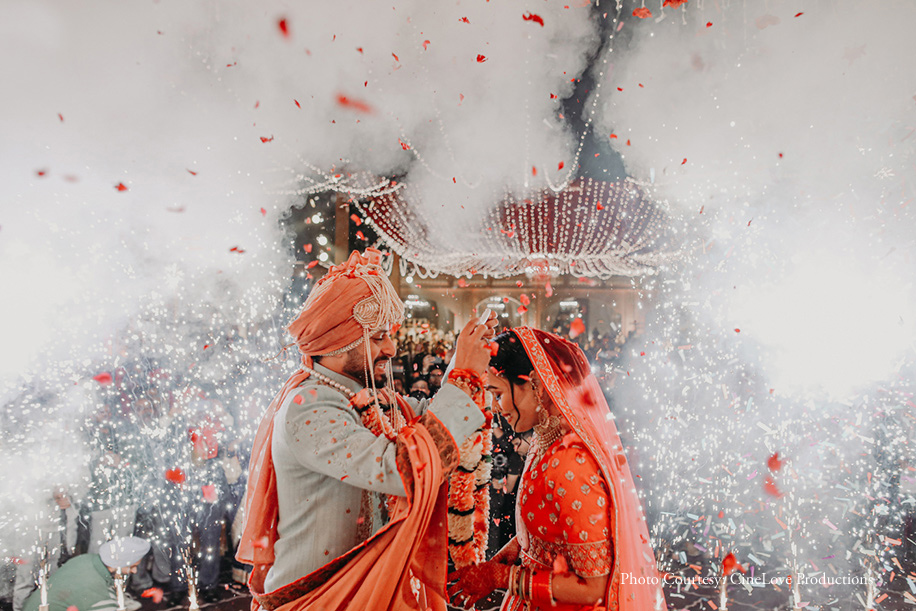 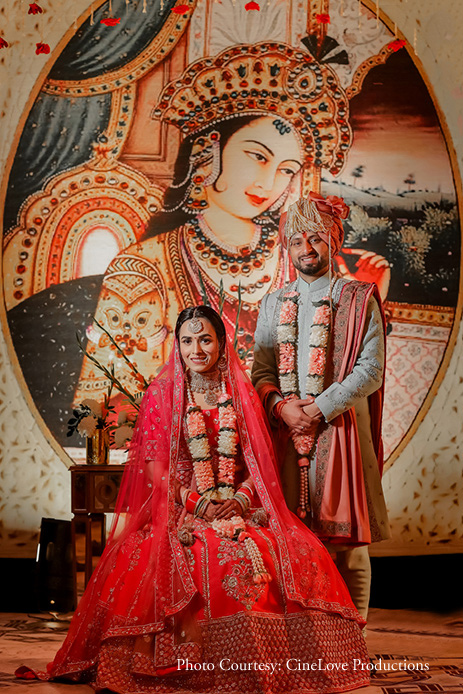