Soaring high on energy and music, this couple’s sangeet commenced with a spirited flash mob entry where the bride and groom shook a leg to their heart’s content.

College sweethearts, Ishani, and Abhinav started their love story as friends and just as the time came to bid goodbye to college life, the duo realized the deep love they had for each other. From a thousand miles to busy careers, over the years their relationship has seen it all and somehow, emerged stronger after each challenge. And soon enough, the happy couple decided to start a new chapter in their lives with a beautiful fusion wedding that saw two opposite cultures, Punjabi and Gujarati, to be precise, come together in the most beautiful way possible. Capturing each moment of their joyful nuptials were WeddingSutra Favorites – The Return Ticket Studios, who with each click seized a plethora of emotions in well-composed frames. 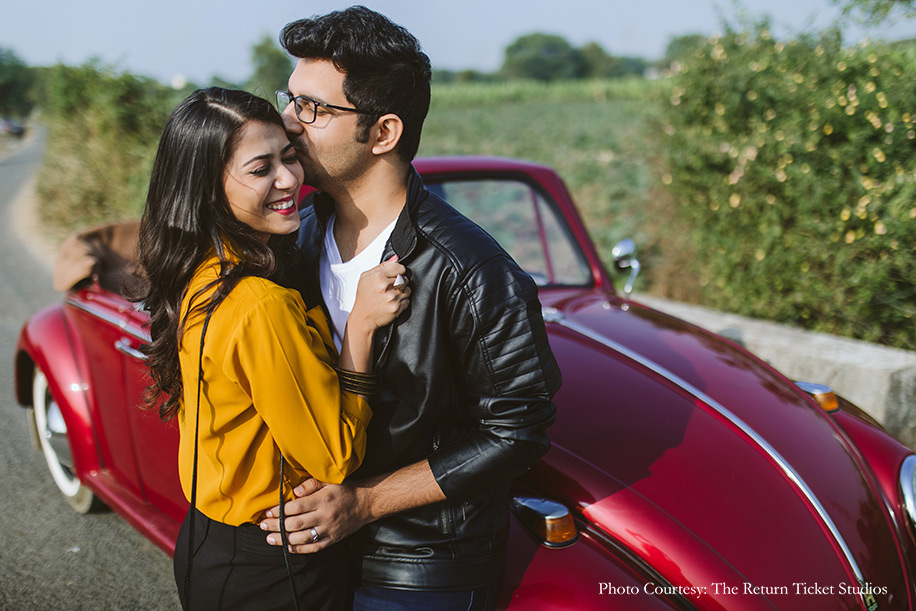 How They Met
Ishani shares, “We first met in college and became great friends. And, honestly, it wasn’t up until a few weeks before bidding goodbye to college life that we realized the strong feelings we had for each other. Like they say, ‘When the heart knows, it just knows’. And, like many other couples, our story also had its fair share of ups and downs where we combated a distance of thousand miles between each other, our busy work lives, and a million other responsibilities. But we were able to work it out because we never stopped being best friends. From our best moments to our worst nightmares, our love has seen it all.
Eventually, we realized that it was time to start a new chapter in our lives, and when we informed our parents about our decision to tie the knot, they were absolutely ecstatic.” 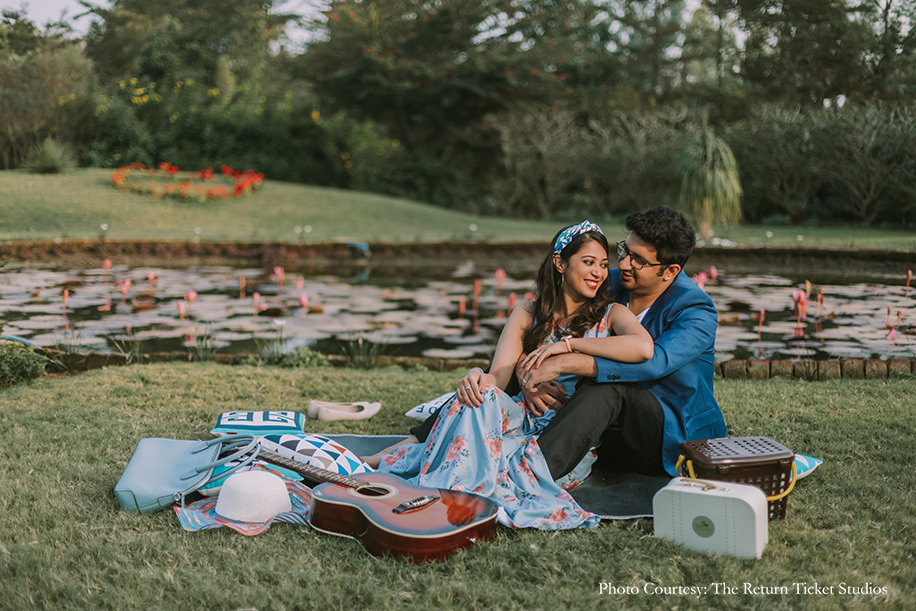 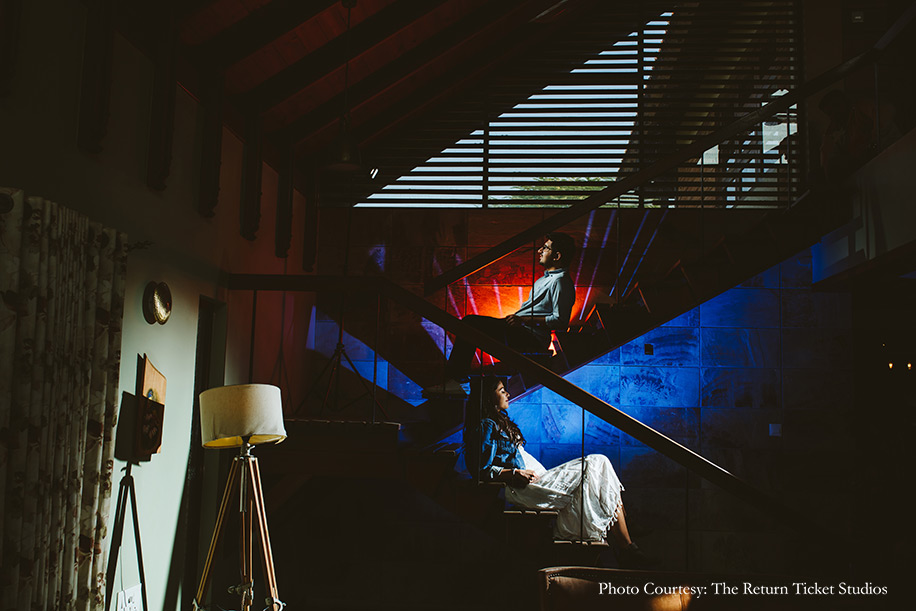 The Proposal
Even Though the duo had never really discussed a proposal in detail, Abhinav came to know that Ishani had always dreamt of having a romantic proposal. And what better than her birthday to pop the question? Knowing her love for the outdoors, the proposal took place in the woods with delicate fairy lights casting a warm glow over the duo. Abhinav recollects, “The decor included a bottle of champagne, a bouquet of red roses, her favorite choco-chip cake on the table, balloons filled with cute little notes, and soft music in the background. I led her blindfolded towards the destination, and the smile on her face was priceless even as she opened her blindfold and looked around in wonder, and a tad bit nervous.

As she burst each balloon and read the note, she was overcome with emotion and nostalgia. And then, when she popped the last balloon, a ring came tumbling down. Before she could say anything, I took her to the adjacent setting where the path was lit up on both sides with fairy lights and candles. This was my cue to quickly bend down on one knee. As I held the ring out, the fairy lights suddenly started glowing and flashed the question ‘Will you marry me?’ and I saw her smile widely and thankfully, give me an instant ‘yes!’” Wedding Venue
With venues spread across the most prestigious properties in Ahmedabad, it’s safe to say that the duo made every effort to ensure that each property reflected their elegant choices. For the Mehndi and Sangeet, the couple chose the Sports Club at the colossal Sardar Patel Stadium. For their big day, they zeroed in on K K Farm where they could revel freely under the open sky.

Wedding Planning
The wedding was an extravaganza that was spread over four days, showcasing the beauty of two very different cultures in an extremely unique manner. Each function was crafted to highlight the rituals and traditions followed in both the cultures, which in turn, made it memorable for each person present. To make sure each moment was captured in breathtaking frames, the couple roped in ‘The Return Ticket Studios’ who impressed them with their dedication and skill. The couple shares, “The Return Ticket Studios had done an amazing job in beautifully encapsulating our nuptials. The entire team was always alert and extremely helpful in every aspect. They successfully made our wedding look larger than life. We’d happily recommend it to others too!”

Additionally, the couple also relied on expert vendors like Whole n’ Soul Events who managed each function, makeup artist Niyati Shah, emcee Veena Bhoothra who hosted the sangeet, Pravinbhai Shinde who played mellifluous jaltarang music during the wedding along with Janta and Milan decorators who expertly handled the decor. 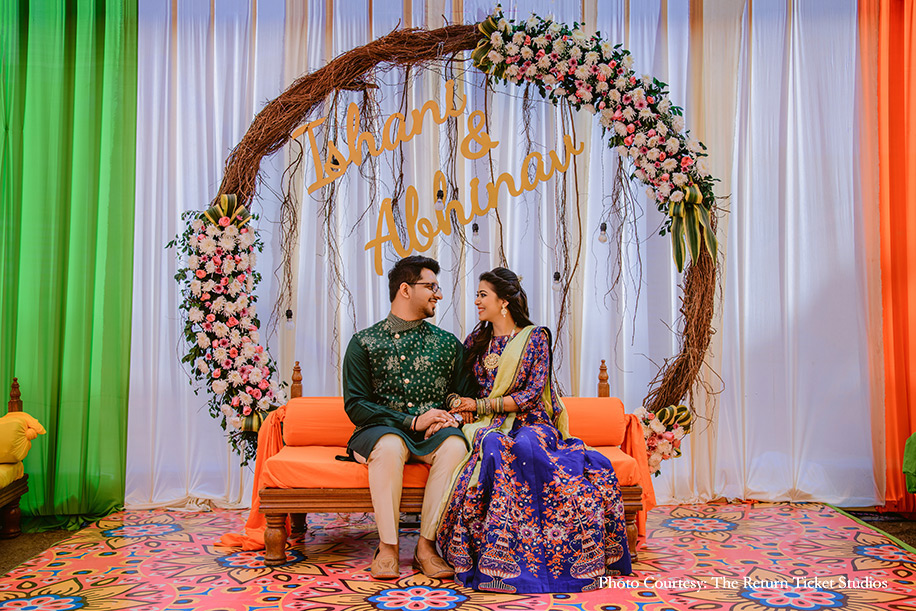 Haldi
One of the most important pre-wedding festivities, the Haldi was a boisterous affair where the bride and groom were blessed and smeared with turmeric to get their pre-wedding glow on. The couple shares, “We went for a complete floral decor along with a beautiful backdrop. The color palette included traditional colors like yellow and orange that resonated with the Haldi theme. Even the dress code was yellow and orange.”
Keeping it fairly simple for the Gujrati ‘pithi’ ceremony, the duo chose to celebrate it within the confines of their home accompanied by a few friends and family members. 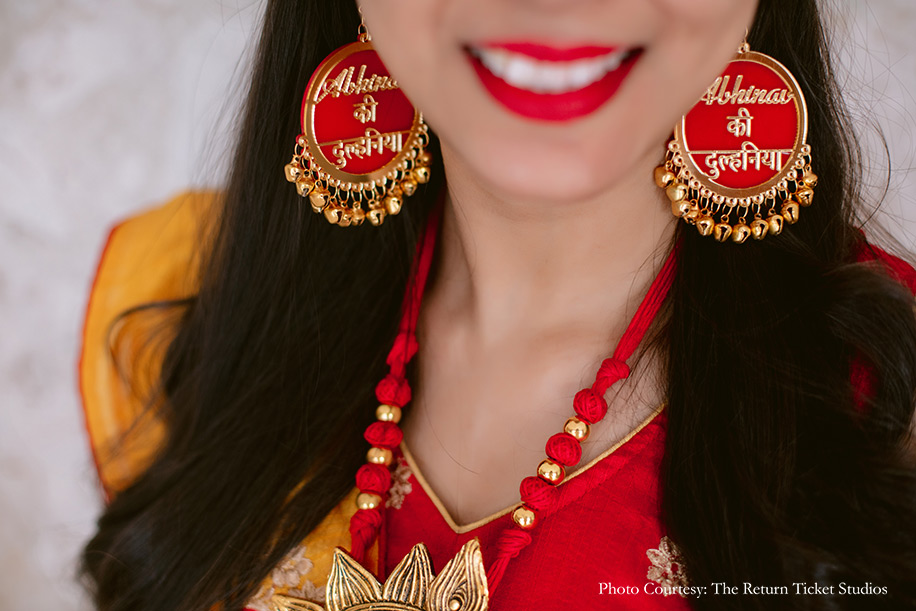 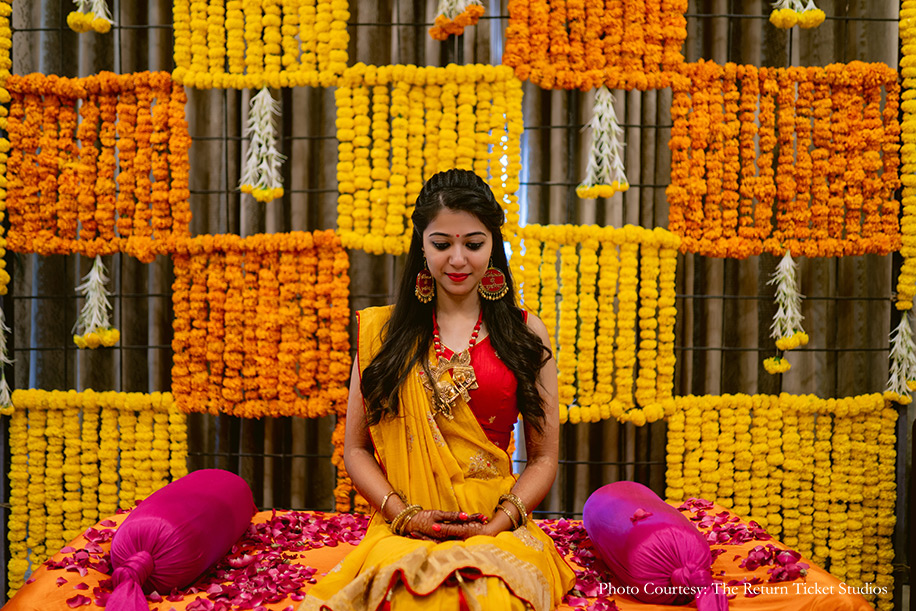 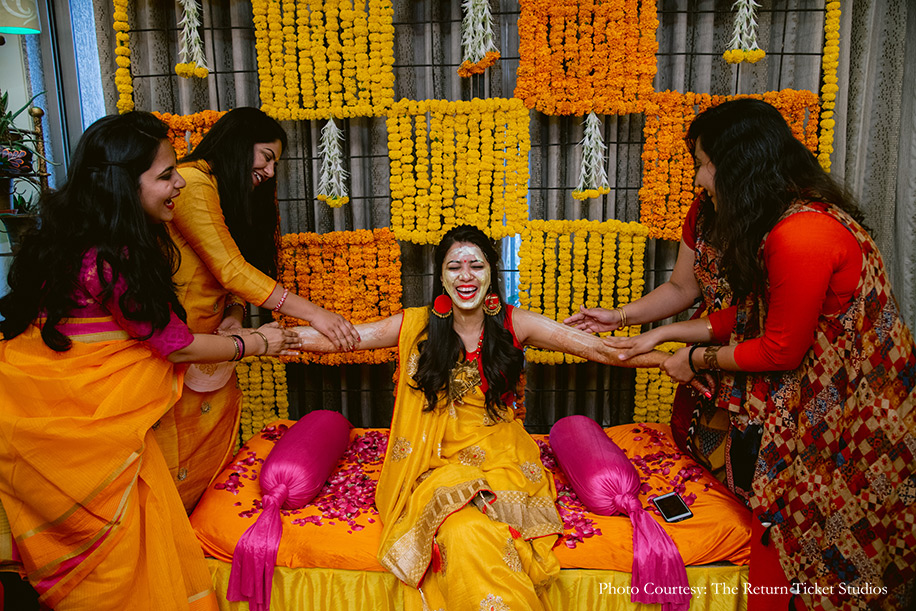 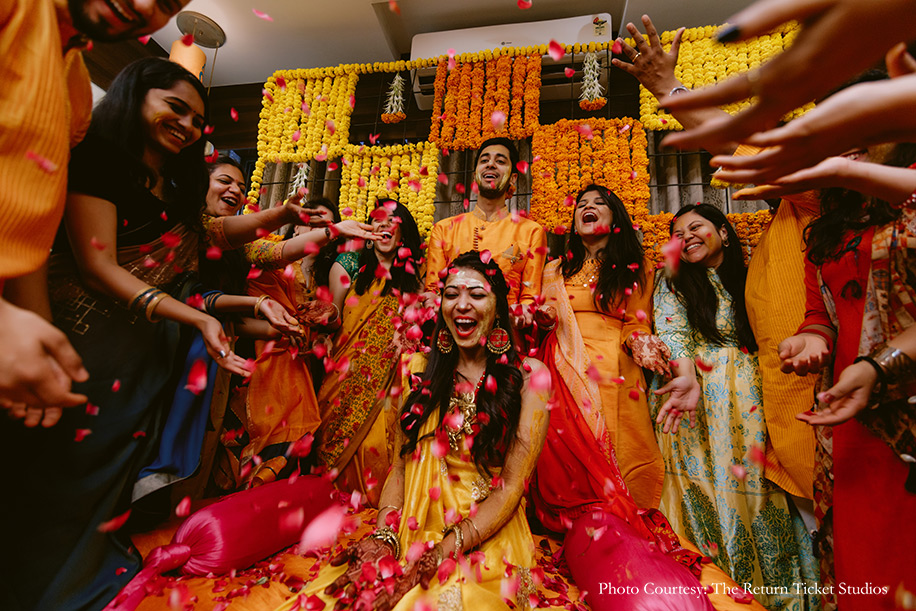 Mehndi
An event that allowed everyone to be completely at ease as they got henna patterned on their palms, the mehndi ceremony exuded lounge vibes with its comfy seating arrangements under a big gazebo adorned with colorful drapes. The couple shares, “The mehndi was filled to the brim with fun and laughter as everyone played a variety of games to keep themselves entertained. Our entry was highly peppy and heralded by vibrant color bombs as we danced to the hit Bollywood song ‘cutie pie’.” 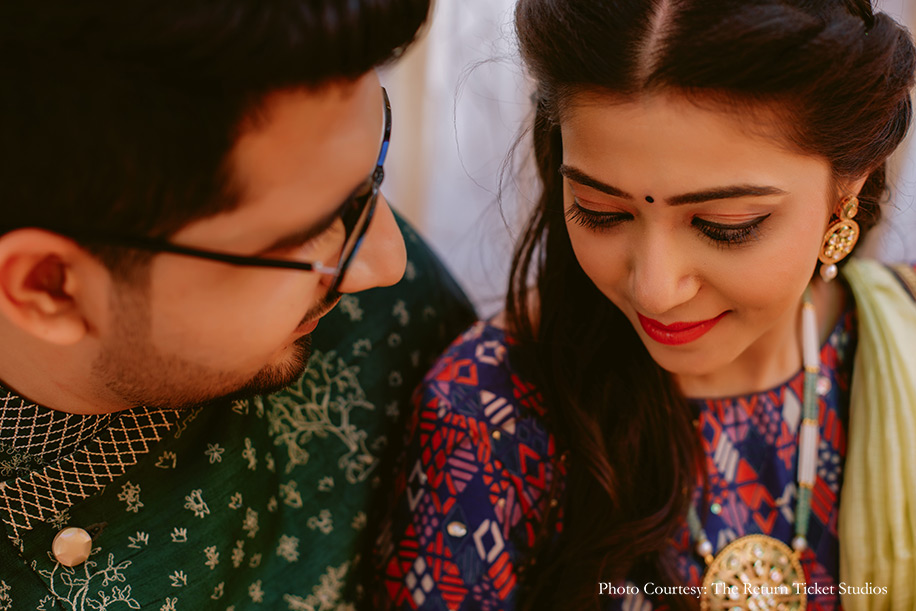 Sangeet
Celebrated in true Bollywood style, the sangeet witnessed exuberant performances executed flawlessly by friends and family members against an ornate backdrop. After an energetic flash mob entry, the celebration commenced as both the families came together to party as one. An open dance floor encouraged everyone to show off their best moves. Hosted under a multi-hued canopy adorned by fairy lights, the party carried on into the wee hours of the night. Wedding
Equipped with a stunning entryway, the wedding fused elegance, glamor, and tradition seamlessly to make the big day unforgettable. However, one of the major highlights of the venue was the colossal stage that gave off dreamy vibes adding a dash of romance to the entire function. A roller coaster of emotions from start to end, the melodic tunes of the jal tarang music in the background had everyone mesmerized as the couple went through each of the wedding ceremonies smiling and glancing at each other shyly. Ranging from the baraat aagman, Jaimala, pre-wedding reception, bridal entry under the phoolon ki chadar, mangal phere, to the sindoor and mangalsutra ceremony and finally, the bidaai rasam, each moment at the wedding was generously dipped in joy and magnificence. 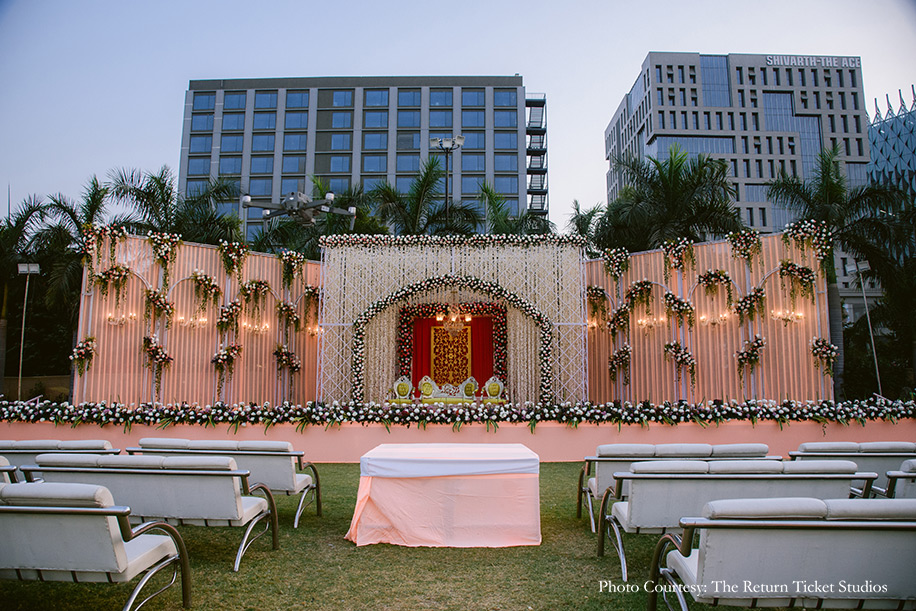