The couple share highlights of their wedding celebrations in the 'Land of Smiles' captured by Knotting Bells.

With guests flying in from Dubai and all over the world, Navleen and Karan wanted their Thailand wedding to be an experience that everyone would treasure forever. Here, bride Navleena shares highlights of the celebrations which were captured by Knotting Bells. How We Met
“Despite having the scope of meeting each other without another person intervening, Karan and I only met when his cousin, who is a friend of my cousin, saw me at her wedding. Karan used to stay in the same building as my grandparents in Bangkok, Thailand, and though I lived in Dubai, UAE, I would visit them every vacation. However, we never once bumped into each other. In fact, Karan was even present at my cousin’s wedding, but he would leave the functions as soon after they were over. I, on the other hand, love to socialize because of which his cousin took notice of me and thought that Karan and I would make a good pair. He discussed this with my cousin, and she agreed. As soon as I got back to Dubai, Karan reached out to me! He is a shy guy who would have never taken this step on his own initiative but did so after repeated nagging by his brother. From that point onwards, we didn’t stop talking and became best friends! We started ‘seeing’ each other on Skype and spoke for hours. We used to look forward to coming home from work every day and talking to each other, and that’s how things all fell into place.” 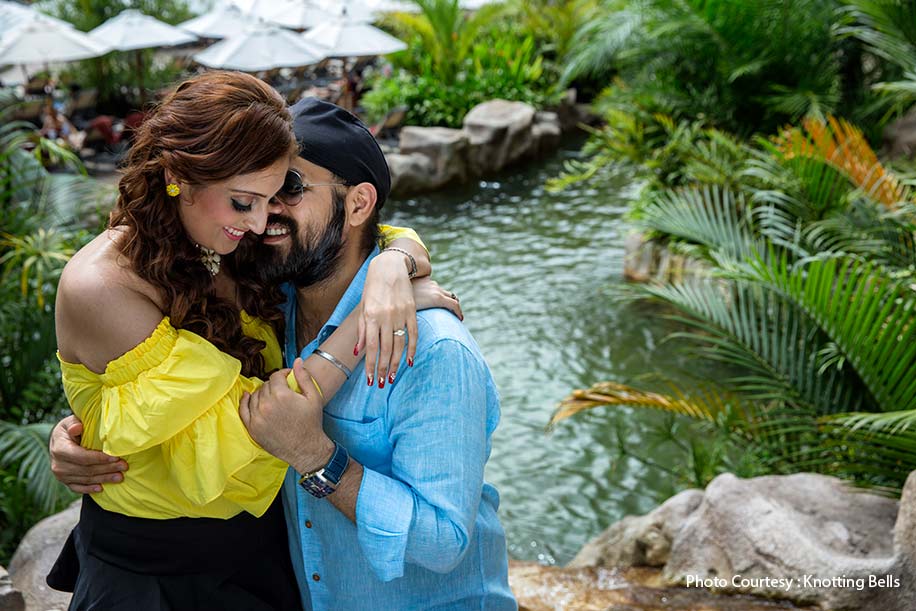 Proposal
“Karan’s proposal was epic! He came to Dubai to ask my dad for my hand, and the next day, he took me to the Dolphin Bay at Atlantis, The Palm. There, we swam with dolphins the whole afternoon. The animal lover that he is, he made a dolphin bring the engagement ring to me! The organizers took Karan and me to one side and a dolphin fetched a capsule and brought it to me. When I opened the little box, there was my beautiful engagement ring! At this point we were in the shallow end, so on seeing the ring when I turn back to look at Karan was on his knees in the water, asking me to marry him! I was over the moon – I couldn’t stop laughing as I didn’t expect such a unique proposal and given his personality, something like this coming from him was totally unexpected!”

Wedding Venue
“We had a destination wedding in Pattaya, Thailand. We picked Centara Grand Mirage Beach Resort as the venue as it is a huge property with a colossal swimming pool overlooking the beach. It also had a lovely tropical atmosphere and was very child-friendly which is why lots of couples brought their kids along. It was the best place to accommodate all our 700 guests! All our functions were held in one ballroom. However, every day there was a different set up done by our planners, so the room was transformed completely for all the functions. We had the best planners indeed! We picked Pattaya because we wanted the destination to be convenient for our family members to reach to which is why driving from Bangkok was better than flying them to another city or island. While the convenience factor wasn’t the same for our Dubai guests, it was very exciting for them nevertheless!” 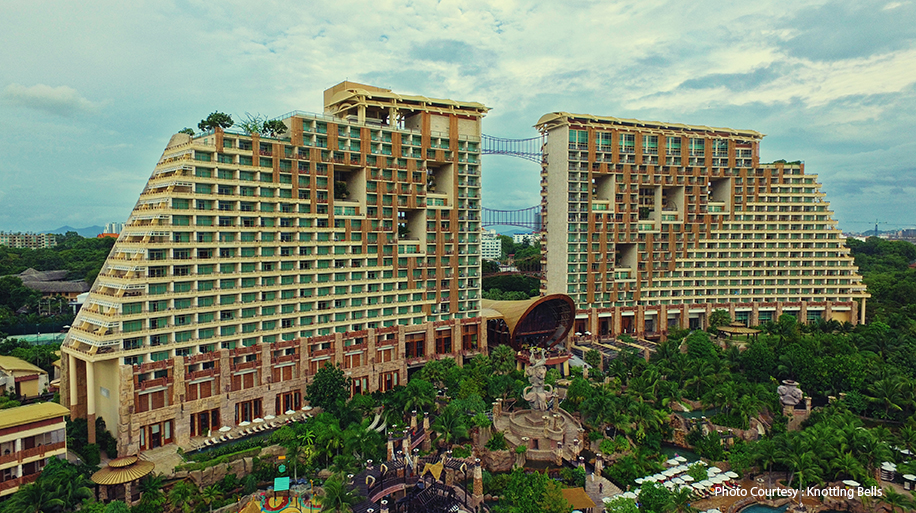 Wedding Planning
“We had Mantra Events from Thailand plan our wedding and I must that that they did a fabulous job. Our photographers and videographers were Knotting Bells, and they certainly deserve a special shout out for being such a dedicated team of professionals. They skipped lunch and were in the heat all day to capture our pre-wedding shoots and plan for the busy three days! They ensured that all that was discussed before was captured effectively!”

Mehndi
“This was the first of our functions and took place in the afternoon. The theme was floral, and the colors that we used were pink and teal. This function was perfect to kick-start the celebrations. We spent the afternoon greeting our guests who had traveled the distance to be a part of our big day and offered them appetizers, tea and, of course, alcohol.” 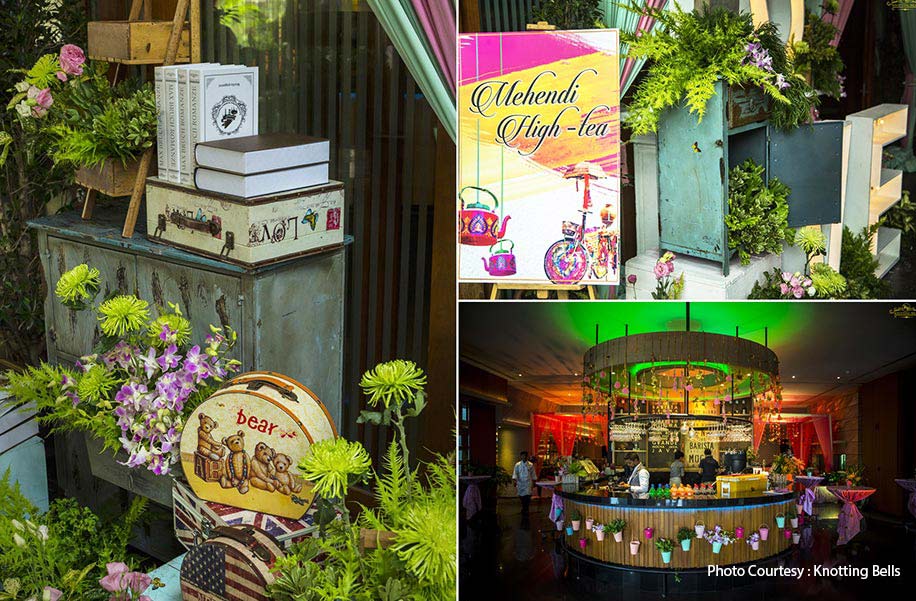 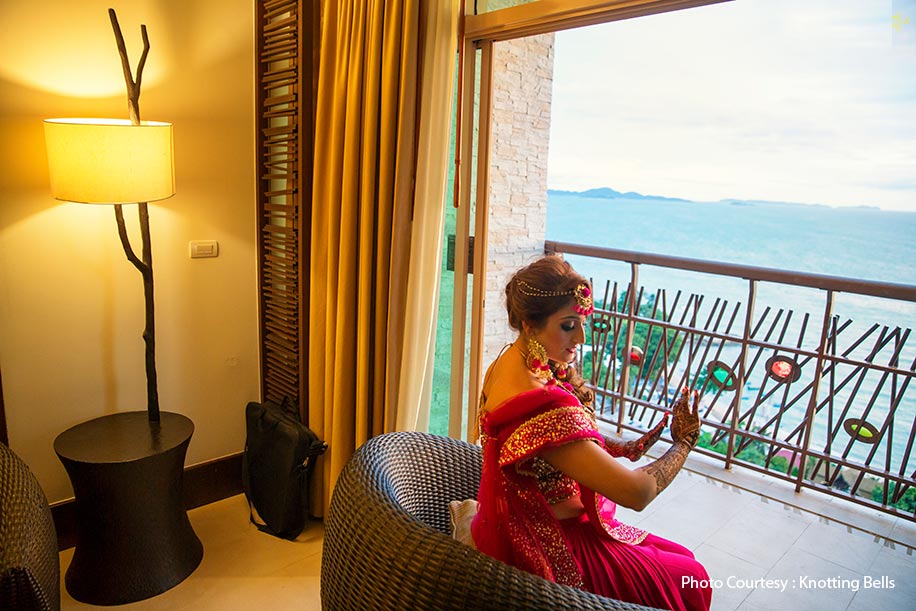 Sangeet
“We had our sangeet on the same night, soon after the mehndi was over. The theme for this function was a nod to the places that Karan and I were brought up in, namely, Thailand and Dubai and it was called ‘Arabian Nights in Siam’. The decor was a fusion of Middle Eastern and Thai elements. I entered the venue sitting on a large lotus while Karan entered with Thai and Arabian dancers leading the way with his groomsmen following him. This was the formal welcome dinner for all our guests.” 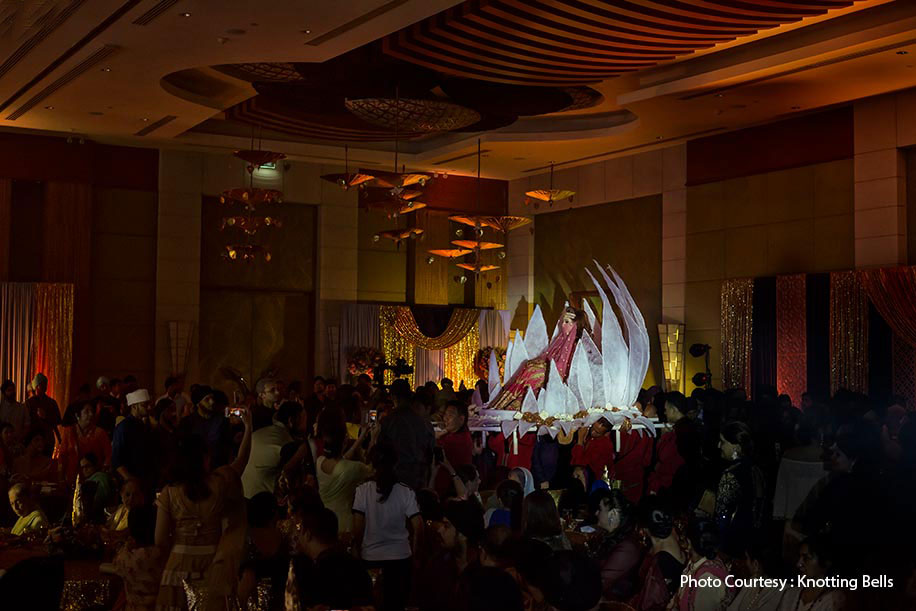 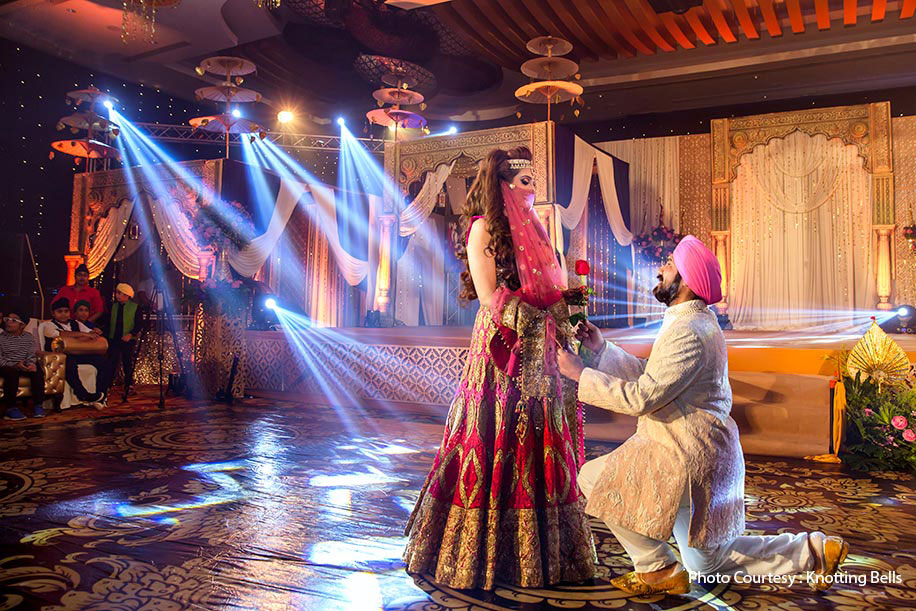 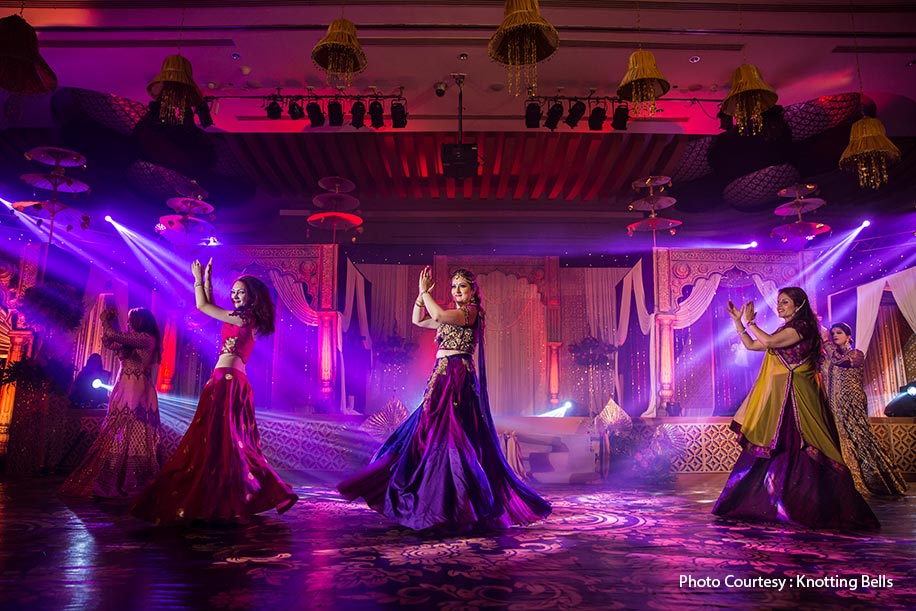 Foam Party
“‘Fun Frolic and Foam’ was the theme for this party that took place by the beach. I entered the venue on a ski with my brothers surrounding me, and Karan entered in the same manner. The vibe for this event was rather casual, and the focus was on just letting loose and having fun, and we made use of happy pop colors to do up the venue. My bridesmaids wore pink t-shirts that read “My friend got a husband and all I got was this t-shirt”. We thought it was a quirky addition and all of the girls loved wearing them.” 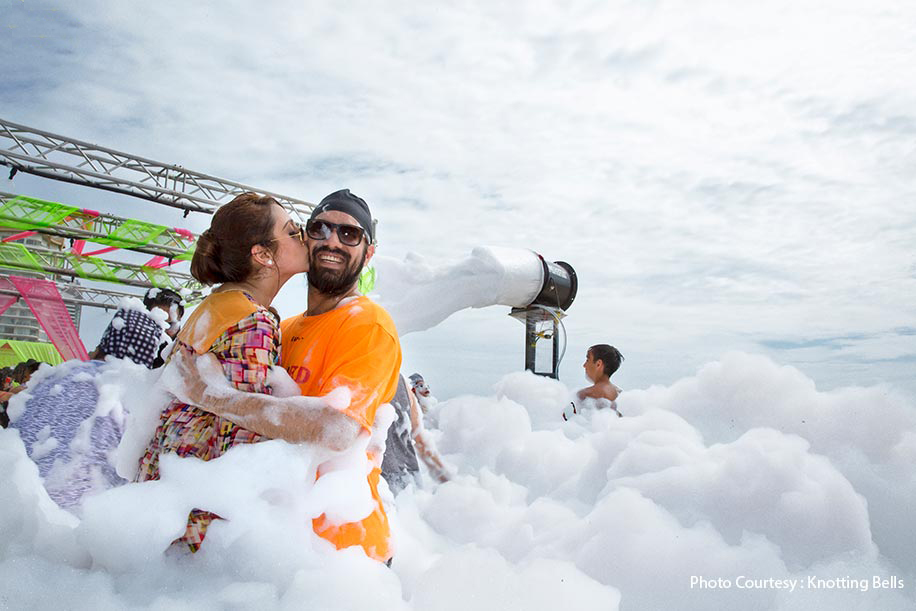 Havana Night
“On this night, we transported our guests to the Cuban capital – Havana. Karan and I danced as we entered to traditional Cuban Music and I chose an outfit that matched the mood perfectly. Flowing skirts with layers of frills are a part of traditional Cuban dressing. The design of my dress was inspired by this feature of their outfit and was enhanced further by 3D floral embroidering.”

Wedding
“We wed in the afternoon a gurudwara in Pattaya and on the way there both of us were escorted by a police car to pass through the traffic quickly! I wanted to dress up in the traditional bridal colors, so I opted for a red lehenga. Karan wore a beige sherwani and teamed that with a maroon turban.” 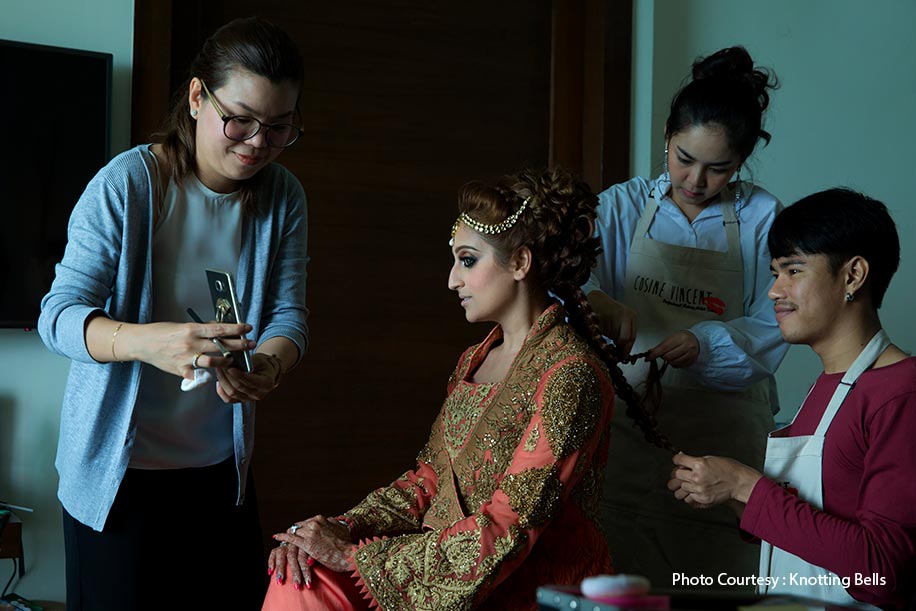 Reception
“Our reception was called ‘Swinging with Sinatra’, and it was a tribute to one of the most influential figures of the music industry there ever was. It was a glamorous party and to match its mood, I wore a golden gown that and Karan opted for a classic three-piece suit.” Advice For Couples
“Here’s a bit of advice for all to-be-wed grooms – don’t let your fiance plan the whole wedding for your own sanity. Couples should make sure they enjoy the food catered at their own wedding, avoid getting drunk, take time out for photos – and be prepared for complaints, but don’t take them personally. Lastly, make sure you enjoy yourself to the max as this kind of spotlight will not come your way every day.”