Nikita and Kunal’s journey of love began around four and a half years ago when they met for the first time at a friend’s wedding. Initially, as good friends, their relationship went through its fair share of ups and downs until, finally, the duo just couldn’t deny the chemistry in between them. Hosted in Mumbai aka ‘The City of Dreams’ their wedding was decorated by WeddingSutra Favorite – The Doli Diary co-founded by the bride’s elder sister approached each event of the union with unbridled creativity and meticulous attention to detail which, in turn, ensured that each event was a treat for the senses. On the photography front, WeddingSutra Favorite – House on the Clouds with their superior expertise behind the lens made sure that each frame told countless stories. How They Met
Nikita shares, “We first met around four and a half years ago at my best friend’s wedding where I noticed Kunal flirting with another one of my school friends. But luckily, nothing panned out between them and as we were sharing a ferry ride back from the wedding hosted at Alibaug, he happily shared his earphones with me and we sat listening to his playlist together. Soon, we became close friends who’d hang out with each other. Most times, it would be me who’d initiate the conversations since Kunal is an introvert. Then, as time flew by, Kunal confessed to having feelings for me which I didn’t reciprocate to at that point. For me, he was just a friend. But finally, after some time he put his foot down, confessed he couldn’t be ‘just friends’ with me and if I didn’t feel the same way as he did, it would be better for him to just back off. And somehow, I just couldn’t let him go!

For three days, we didn’t exchange a word and I felt all those emotions that they show in a Bollywood break up scene. Finally, on the fourth day, I forced him to meet up with me and decided to start a new chapter in our relationship. It actually took me less than a month to fall head over heels in love with him and in about three months, I knew that I wanted to spend my life with him.” The Proposal
Resolved to pop the question to her man, Nikita formulated a small surprise proposal for Kunal. The happy bride recollects, “We were to get engaged in February 2019 so I knew that I had to put a ring on him before that. Keeping that in mind, I planned a little proposal in our backyard which was lit up with fairy lights, candles and attended by his closest friends and family. An acoustic guitarist also played beautiful romantic tunes as we reveled through the evening.

However, little did I know that even he had a big proposal planned for me in Goa the following week. But, as I always say, I still beat him to it!”

Wedding Venues
“For a wedding in Mumbai, January offers the best weather, and both of us were keen on having a beachside wedding. And so, our search began as we looked through numerous venues in Juhu located by the sea. The Juhu Hotel was one of the first venues we visited and loved from the first glance itself. But we still thought to give other venues a visit. And as fate would have it, none of them caught our eye quite as the first venue did! It’s a lovely place with a spacious lawn and a beach backdrop from where one can view dramatic sunsets.

And, for the final function which was the cocktail, we were convinced that we wanted to dance the night away and hence, booked a vast banquet hall in Sahara Star where all our loved ones had enough space to show off their best moves.”, shares Nikita. For the other pre-wedding functions the duo chose venues like Ostaad for the pre-wedding party, Keiba for Kunal’s mehndi after-party, and JVPD Club for Nikita’s Haldi and Mehndi.

Wedding Planning
It was exactly as we had imagined and more! I would gladly work with them again.” And, staying true to their DIY spirit the bride and groom decided to design the invitations by themselves. Recalling the fun-filled process, the bride shares, “ From the start itself, I was quite clear about the design being simple and hand-painted. After a quick sketch from my side, Kunal pitched in with the final finishing touches and chose the fonts! It most definitely felt more personal and we used the same artwork to adorn the entryway of all our functions.”

Giving an in-depth overview of their creative process, co-founders of The Doli Diary Neha Wadhawan and Jinal Patel, who also happens to be the bride’s elder sister, share, “ Nikita did not want to use a lot of flowers and we mutually agreed on reducing as much waste as we could. Hence, we zeroed in on a mandap crafted out of bamboos and sourced flowers from Gujurat via relatives who happily obliged to bring the blooms directly from the farms. Additionally, planted pots instead of oasis and cut plants were tastefully placed across the venue to reduce wastage. Elements like clay pots on the tabletops and also reusable flower baskets that the guests could take back were also included to reduce superfluousness. Furthermore, even the fabrics were sourced locally from Varanasi when the bride visited the city for her lehenga shopping. Each fabric was cut keeping the size in mind so that they could be used in the future as dupattas or sarees. ”

For the photography, the couple decided to go for one of the most popular names in the industry, Haldi and Mehndi
“For our respective Haldi and Mehndi, we wanted the decor to be very simple with just marigolds and fairy lights. We had our separate Haldi functions with Kunal’s Haldi taking place at his home’s backyard which was decorated with marigold hangings for the occasion.

However, for my Haldi and Mehndi ceremony, we zeroed in on a rooftop venue and the decor was quite similar to Kunal’s Haldi. The only difference was that instead of fairy lights we chose diyas for the decor. It was a beautiful day with the winter sun gently warming us as the breeze blew softly. Everyone wore yellow while I donned white and my mom ingeniously designed floral jewelry for me and additionally, even designed 100 more pairs of multi-hued earrings for all the guests. She also created the little chaddar that was held over my head while the rituals took place. In doing so, we ensured that there was a personal touch to the function.”, shares Nikita. 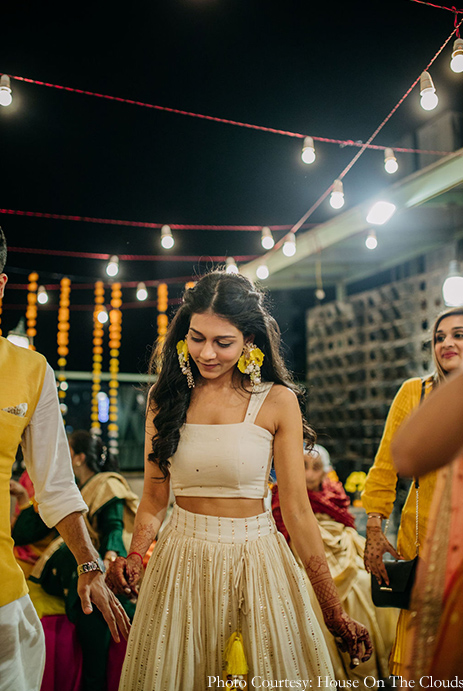 Wedding
“All of our family members, as well as the groomsmen, were dressed in shades of white, green, and gold to complement the decor. This also included the safas that they wore which were made out of banarasi tissue. Our brief for the decor was again fairly simple with warm and earthy elements being the two most important factors for us. Bulky florals were a complete no-no for us and I must say, the decor team aced in this aspect. Since it was a beachside sundowner wedding, we wanted everything to be breezy and light in order to highlight the beautiful sunset in the backdrop. The aisle leading to the mandap was one of my many favorites with dainty flowers sourced from a village in Gujarat adorning the pathway. Additionally, we also had light and flowy banarasi fabrics draping the mandap, small brass bells at the end of garlands that kept chiming in the breeze and coconut leaf baskets with flower petals in them for the flower shower during the phere. My phoolon ki chaadar was actually a DIY project taken up by me and was actually crafted out of fairy lights. The same held true for my wedding invitation card that I designed myself.

And last but not the least, to accompany the calming sound of the crashing waves, we also had a hapi drummer whose beats when combined with the sound of the sea, created a soothing atmosphere.”, recollects Nikita. Cocktail
“Hosted a day after the wedding, this function was all about letting our hair down and celebrating the end of our nuptials with our friends. Our intentions were to celebrate and have fun which we wholeheartedly did till the wee hours of the night. For this event, the only ‘must-have’ on our list was a bar and the dancefloor. On a whim, we also decided to add red neon signs which Kunal designed himself. It was a magical evening as everyone gathered on the dance floor and shook a leg with us!”, shared Nikita. Advice For Couples
“The most important thing when you’re planning a wedding is to ensure that you and your partner are on the same page. Planning is a hectic process and involves many people. So, the only way that you can stay true to your vision as a couple is to have complete clarity and support each other at each step of the way.”, advises Nikita.