History married tradition at Prachi and Vineet’s wedding in a 300-year-old Ganesh temple inside the 17th century Fort Jadavgarh in Pune.

Our series, ‘Featured Weddings’ brings you wonderful moments from weddings held at the finest venues across different cities. Here, Prachi and Vineet tell us how they met and all about their wedding celebrations in Pune.

How we met
Prachi and Vineet met while studying architecture in Mumbai more than a decade ago. Their friendship slowly turned to love, and they decided to tie the knot. Their relationship further evolved when they started working together as professionals when they launched their company – Studio Urban Form and Objects. 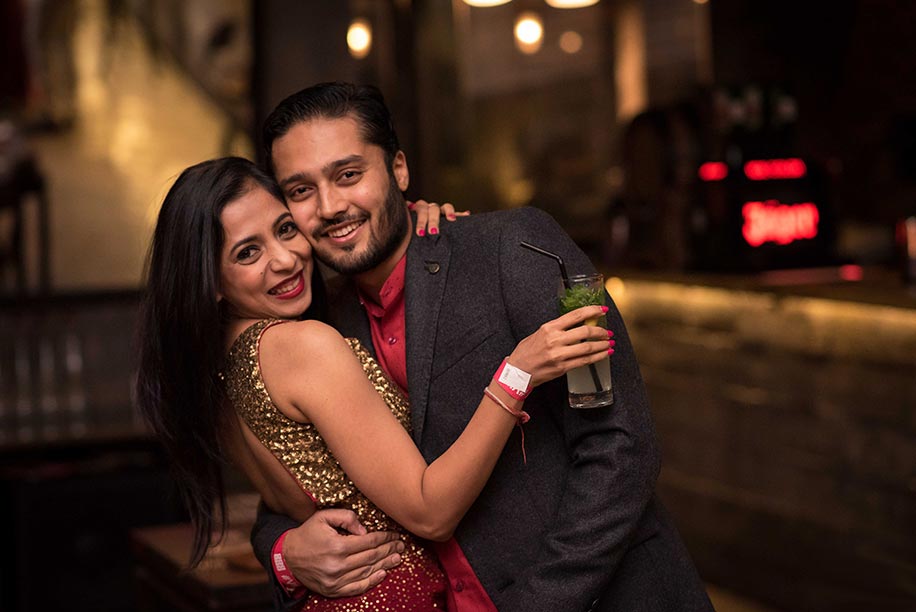 Wedding Venue
Passionate about architecture, both Prachi and Vineet didn’t want a run-of-the-mill wedding at a five-star star hotel with all the limitations of a banquet hall. Their wedding venue had to have inherent character –like maybe a structure with a rich historical past.
They zoomed in on Fort Jadavgarh in Pune. Built in the 17th century by Pilaji Jadhavrao, a Maratha general who served under Chhatrapati Shivaji, it had served as a protective stronghold against the Mughals. It was converted into a luxury heritage hotel in 2007.

Many of the fort’s ancient imposing features were preserved or restored over the years, such as the stone steps leading to the grand entrance, balconies, expansive terraces and ‘kholis’ (rooms). Modern enhancements and amenities were added over time keeping in mind the fort’s history. For example, a swimming pool was created where the fort’s former ‘kund’ (rainwater reservoir) used to be.

The stylish Maharani Suite was created on top of the ‘Aai’ (Mother) Museum – a majestic structure with imposing wooden pillars and traditional architecture that houses collectibles and rare artifacts dating back to the 17th century.

Prachi and Vineet’s pheras were held at a 300-year-old Ganesh temple within the fort’s premises. The timelessness of this venue coupled with its auspicious aura made it a truly memorable occasion. 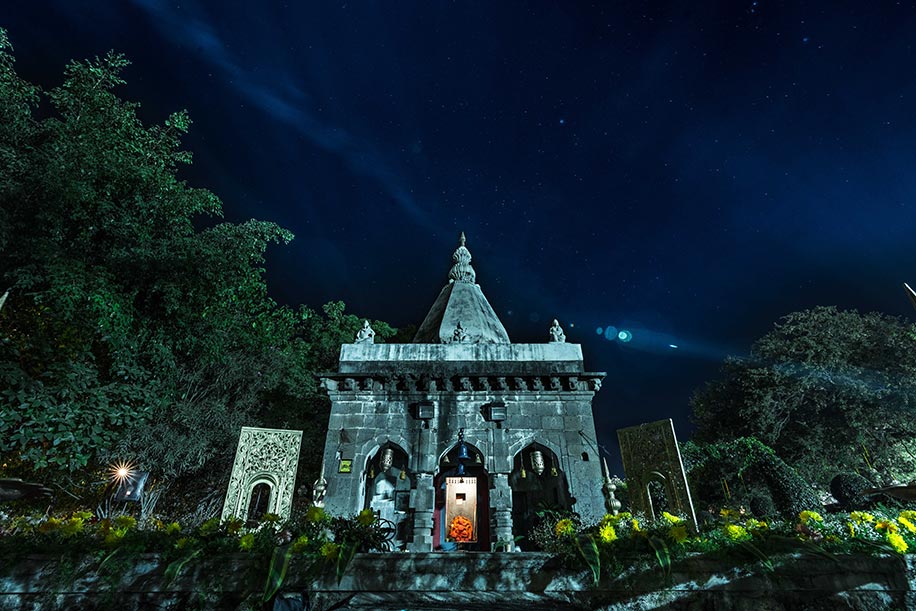 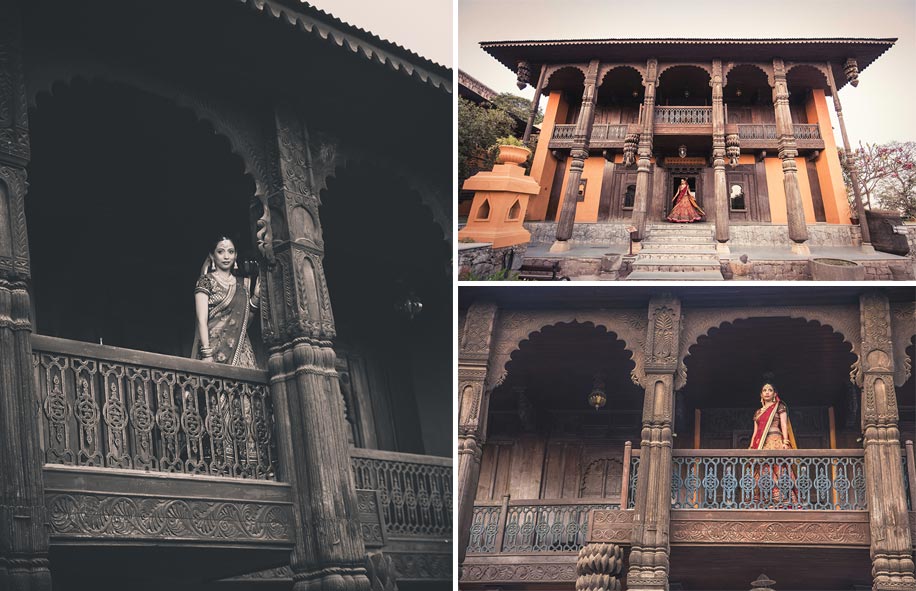 Wedding Functions and Decor
As architects, Prachi and Vineet were very specific about the look they wanted when it came to wedding décor. The stone structure of Fort Jadavgarh was brightened up with festive orange and bright yellow hues of ‘genda phool’ (marigold) garlands and strands.

The in-house team at Fort Jadhavgarh did a very creative job with the floral décor. Thousands of marigolds were festooned in interesting nooks and corners, and offered a stunning contrast to the ancient stone ramparts and the azure pool. A majestic neem tree near the pool looked fiery with bright strands of marigold garlands strung from its branches. Flowers were also entwined around pillars and brass birdcages, while colourful string ‘latkans’ with animal figures and tinkling bells added new colours to the environs. At the entrance, a bicycle decorated skillfully with marigolds and gorgeous African daisies greeted guests. Haldi and Mehndi:
The haldi and mehndi ceremonies were held during daytime by the pool The dress code for these events was ‘Lucknowi attire’, and the couple followed it faithfully. Prachi donned a beautiful white and orange lehenga by Akruti Seth of Akruti Ethnic Couture. Its light and airy vibe with all-over white embroidery made it a perfect pick for a sunny day.

Vineet’s white kurta – paired with an orange churidaar – was an elegant creation featuring all-over exquisite chikankari embroidery – which Lucknow is famous for. The couple matched each other perfectly with their well-coordinated ensembles. 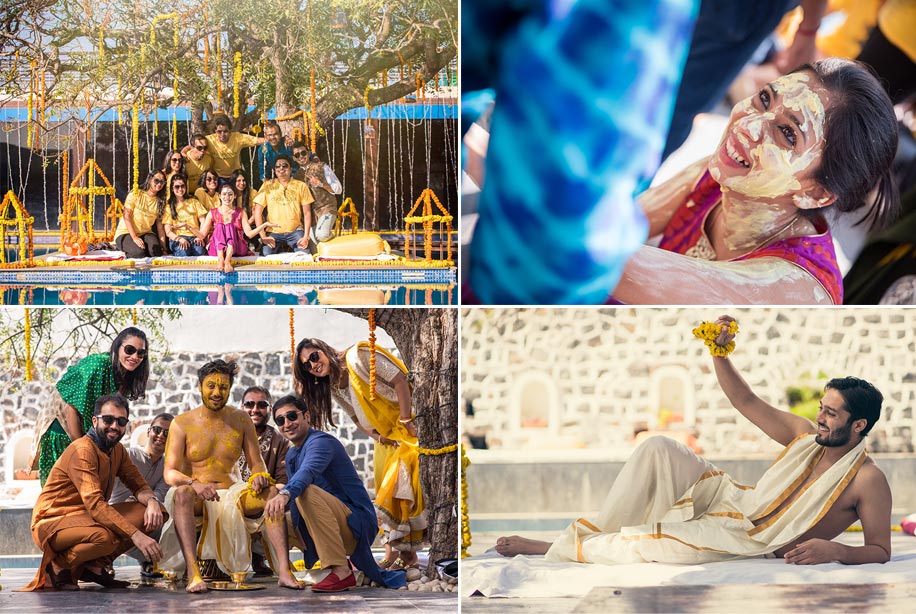 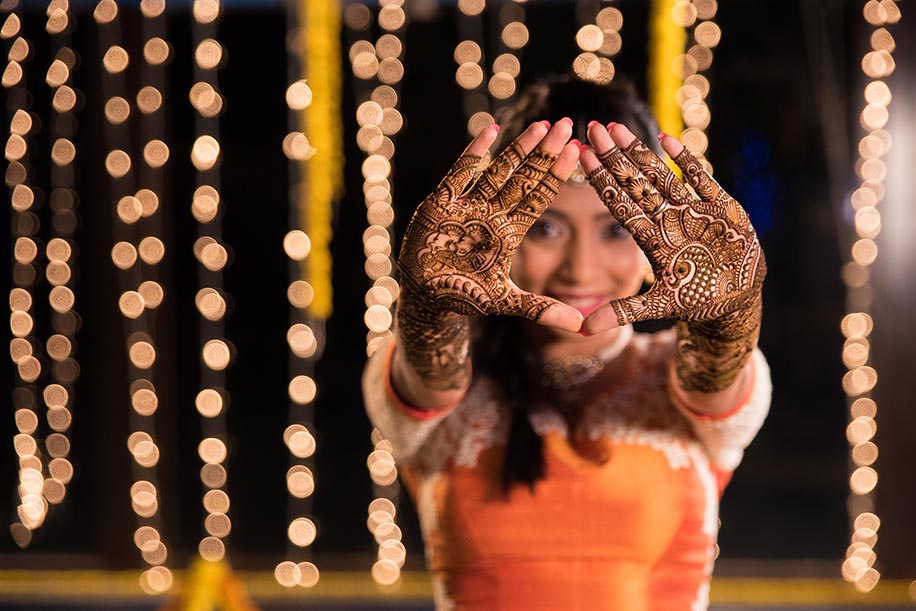 Sangeet
The sangeet ceremony was held outdoors on the lawn, against the imposing backdrop of the fort’s walls. It was a glamorous evening affair that saw everyone turn out in their glitzy finery. Prachi wore a stunning mauve lehenga by Mumbai-based Annie & Nimmo, which was resplendent with gold accents and embroidered motifs, while Vineet looked dapper in his well-tailored mauve brocade dinner jacket with intricate motifs from Prime Fashions in Mumbai. 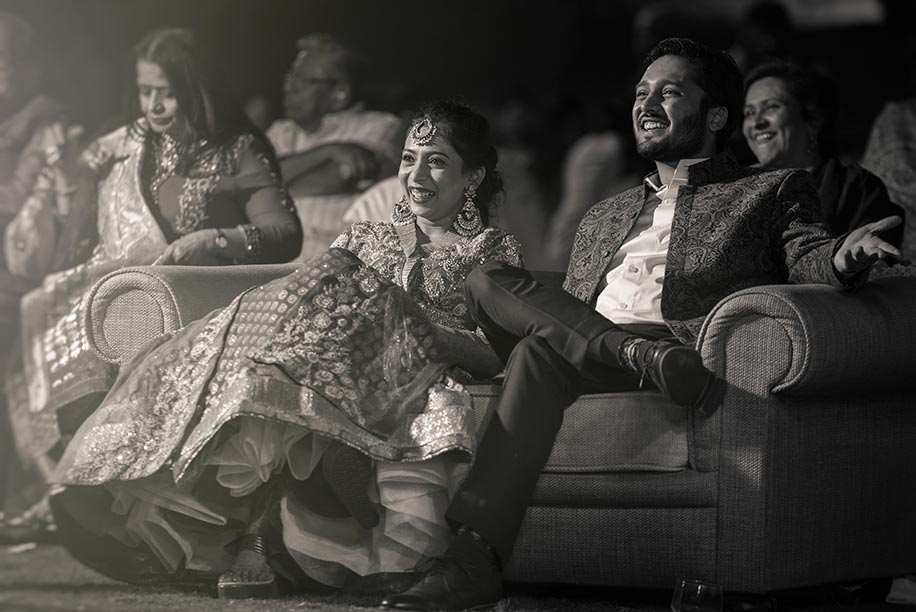 Wedding
The couple walked down a red carpet laid over ancient steps and strewn with marigolds as they made their way to the beautiful Ganesh Mandir built 300 years ago, for their sacred pheras.

The temple silhouetted against the sun was striking in its beauty and significance. Guests took their place on banquet chairs arranged neatly on the lawn in front of the temple and the intimate pheras took place inside.

Prachi looked every inch a regal princess in her lehenga by Tarun Tahiliani which blended red, ochre and gold hues beautifully It was paired with a net dupatta and short-sleeved blouse. She picked her exquisite kundan and gold jewellery after a lot of thought from Sunil Jewellers.

Vineet wore a white sherwani by Mumbai-based Tisa Studio that was threaded all through with glossy dark brown embroidery. He also donned a rich clay coloured wedding sehra (turban) which made him appear like royalty inside the majestic fort. 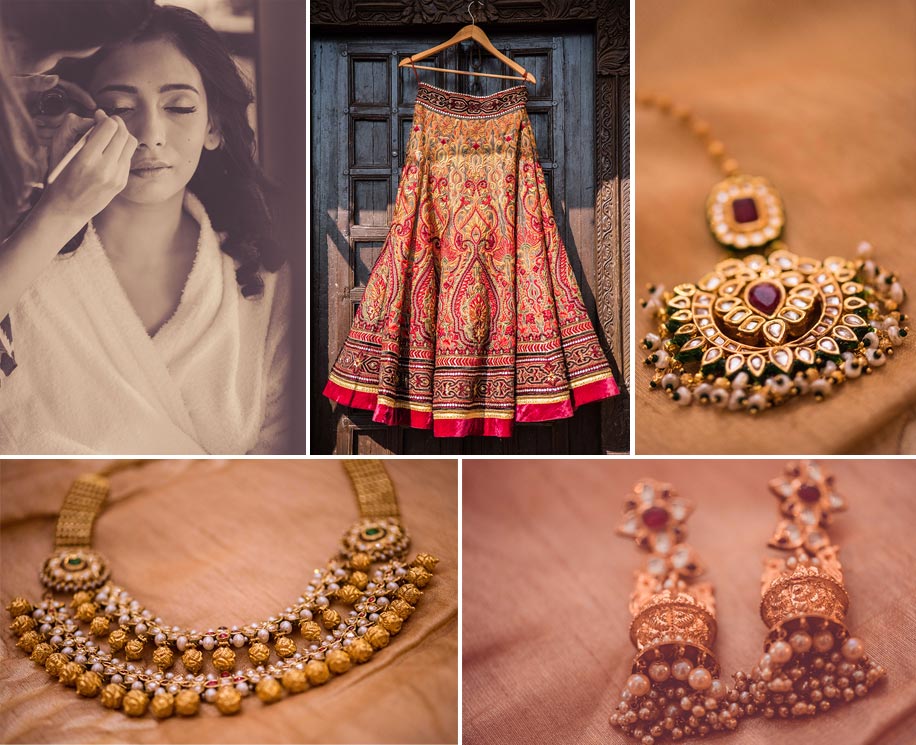 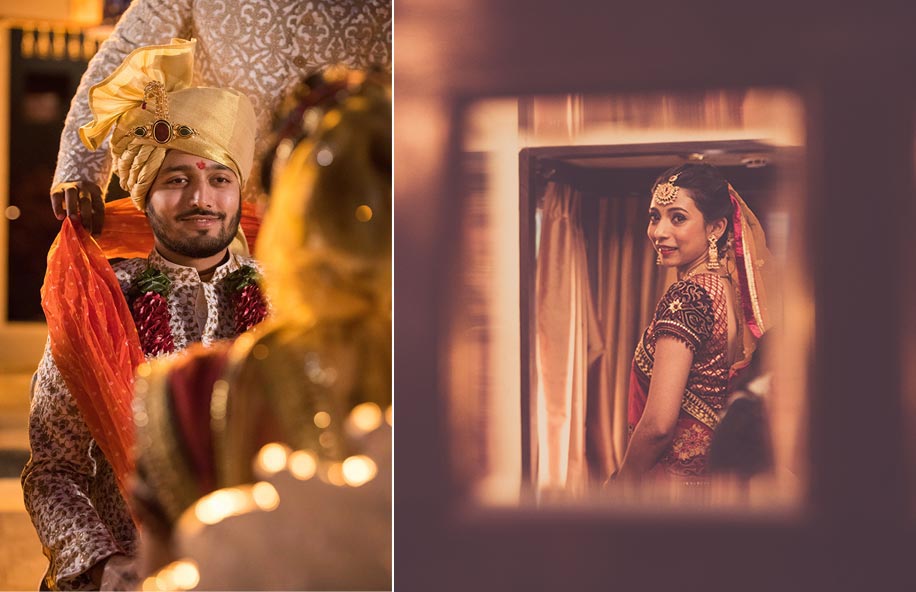 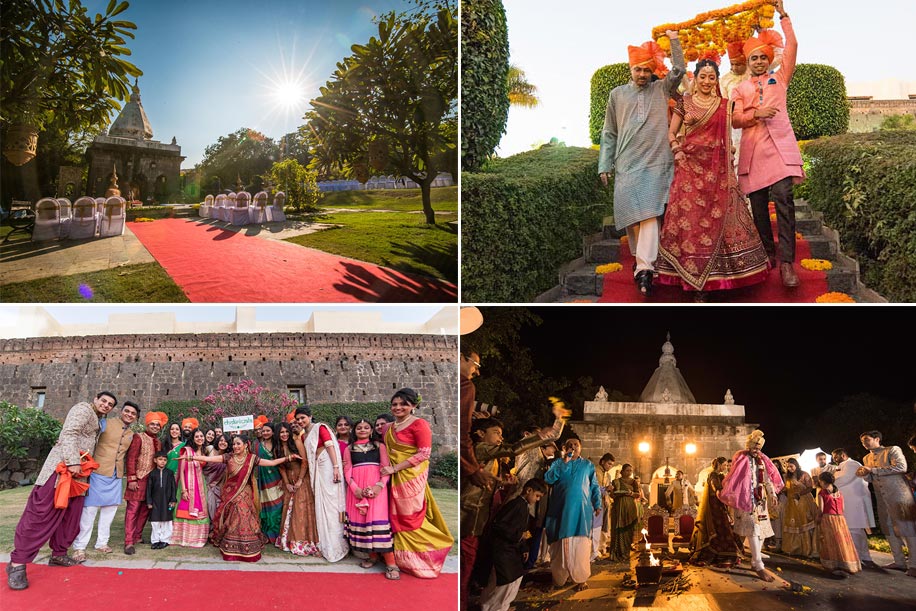 The Wedding Makers
This couple didn’t hire a wedding planner. They took complete charge of the entire wedding and personally handled everything from the guest lists, décor, food and other logistics. Prachi and Vineet’s impeccable organisation skills and process-oriented professional experience showed in every aspect of this memorable wedding.