Sarah and Mustafa’s story is that of love, travels and love for travels.

It is not every day that you come across a couple whose ideal wedding venue has a reputation for being one of the city’s most haunted places! Despite that, the only supernatural element that was spotted at the duo’s nuptials was the gorgeous decor by Aash Studio. Bride Sarah shares with us the highlights of their wedding.

How We Met
Mustafa and a cousin of mine have been friends since they were teenage professional tennis players. On one of their nights out, my cousin invited me to join them. Mustafa and I were at very different places in our lives at that time and we spoke briefly and that was about it. We met again when my cousin was getting married and again, there were no sparks but we did continue our conversations even after the wedding. 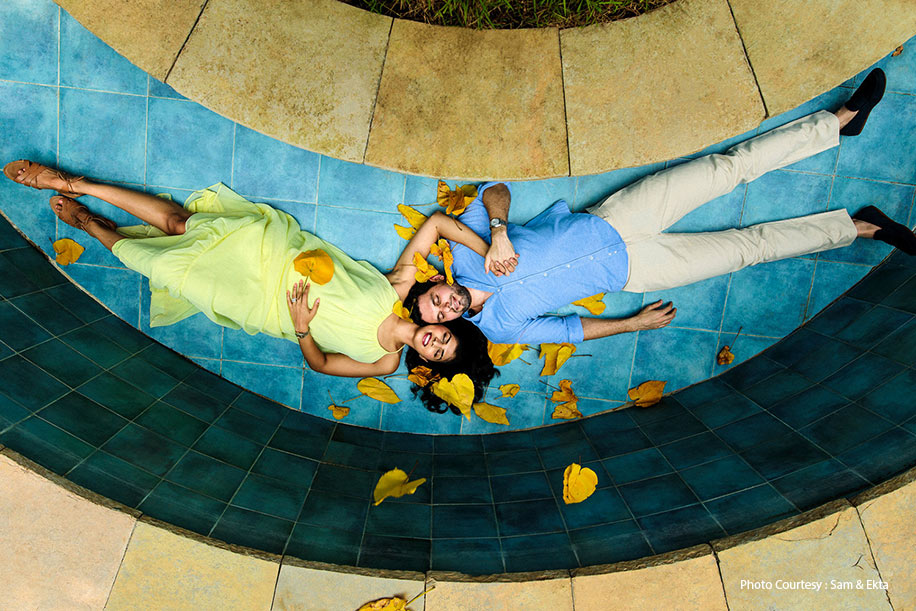 We were in touch for a whole year after and as we got to know each other better we traveled to Sri Lanka, Maldives, Bangalore, Delhi, Coorg, Coonoor. We loved the time we spent together and about eight months in we finally realized that our relationship was a serious one.

Proposal
Truth be told, I was super irritated before and during the time he popped the question!

It all started when he called me up to tell me we were going to Bangalore for a vacation but instead of a hotel, we would be lodging at a government hostel. That ticked me off but I went with it. When we reached I found out that he’d actually booked a room at The Bison. When I saw the room, I was thrilled, it was stunning! The next morning, however, he surprised me again. He said that we had to leave our room and I thought we were really going to the government hostel this time but instead, we moved to another wing of the resort to live in a suite three times bigger with a view that was far more beautiful. Once again I was happy. Later that evening he surprised me with dinner for two in the middle of the forest. The problem, however, was that I had only packed some of my ugliest clothes because I thought we’d be at the government hostel. I loved his gesture but it is so funny how conflicted I felt because he fooled me not once, but three times!

Wedding Planning
Our initial plan was to host one grand nuptial with about 2000 guests in attendance, but as the day approached, we began to feel that wasn’t something we wanted. Both of us were doing that only because we felt like it would appease our respective in-laws. We had booked our venues, but reached a tipping point and decided that we could not go through with that. So, we scrapped it all and started scouting for locations that truly resonated with our vision of what our wedding should have been. After a lot of recces, we came across Mukesh Mills and we fell in love with the site.

We did not have a wedding planner but Aashna of Aash Studio was doing the decor for our wedding and she was of such great help in helping us figure out the logistics. She had also been considering that place as a wedding venue and the great part was that we shared the same vision and saw the same potential in the mills. Both of us wanted to work with the beauty of the ruins and highlight how spectacular something that has been worn out can look instead of working against the aesthetics and covering everything up.

Besides her team, the other people who we worked very closely with were Sam & Ekta and that was one of our best experiences ever. They pulled out all stops and ensured we were comfortable at every step of the way, really working to get to know us as people. We called Ekta ‘the ninja’ because she was so silent but every time I looked she was always there. Both of them captured the essence and the vibe of the wedding perfectly.

Mehndi
We had a very intimate mehndi at Indigo in Colaba. It was a gathering of only 110 people and included just our closest friends and family. 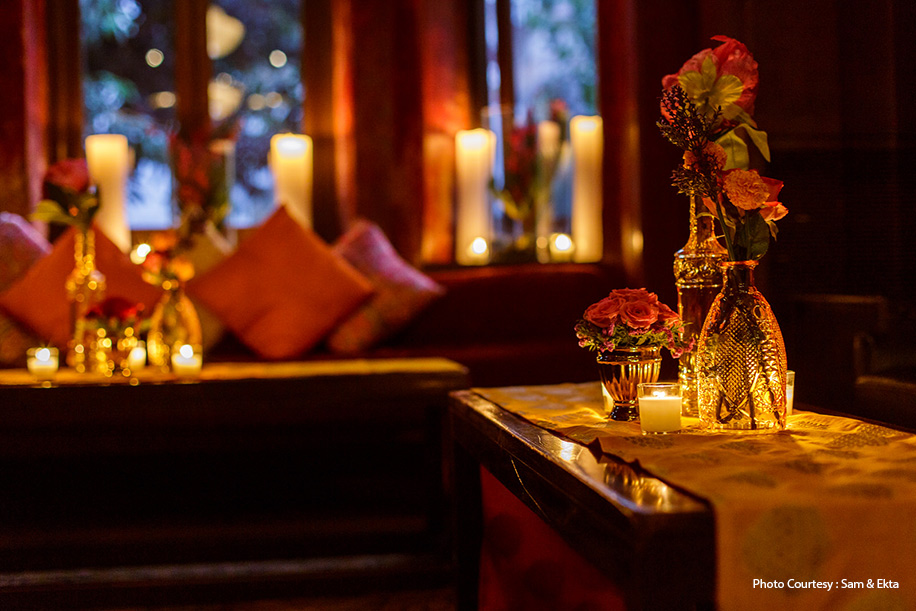 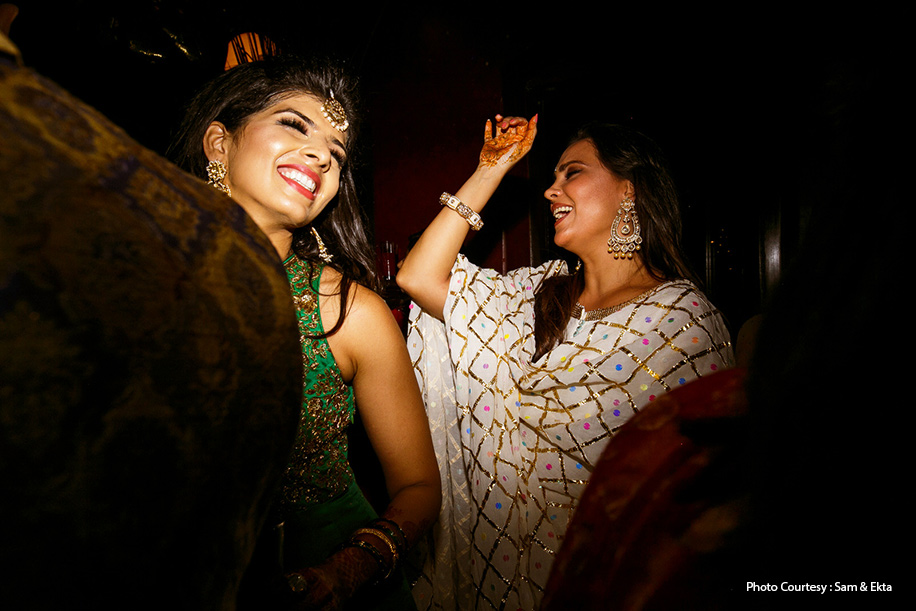 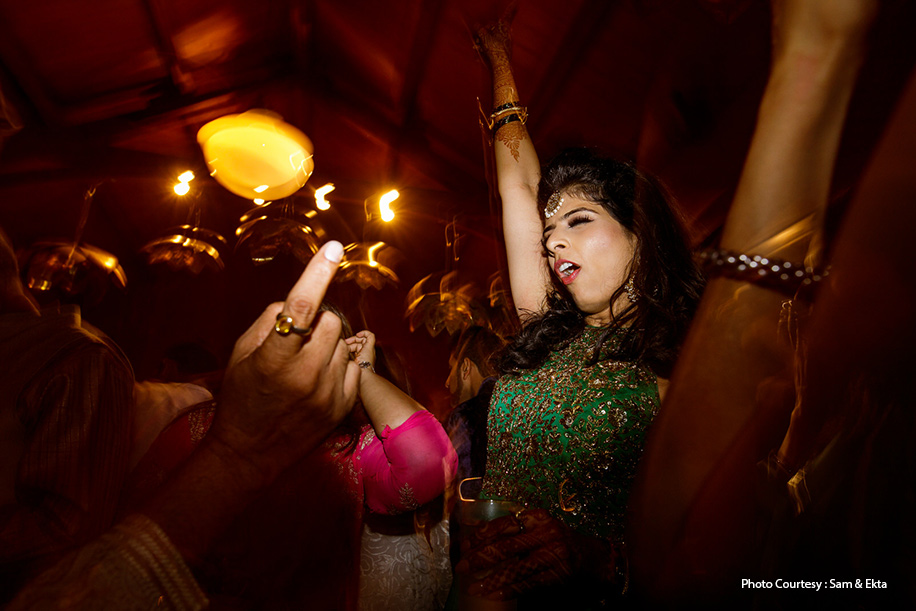 Haldi
This function too was restricted to a very small crowd but it was a very special one. I wore an outfit that is 65 years old! It was gorgeous with real silver work and was bought by my nana for my nani with his very first salary. It has been worn by all the girls in our family for their weddings, including my mother and has a very strong sentimental connect. I really enjoyed wearing it. 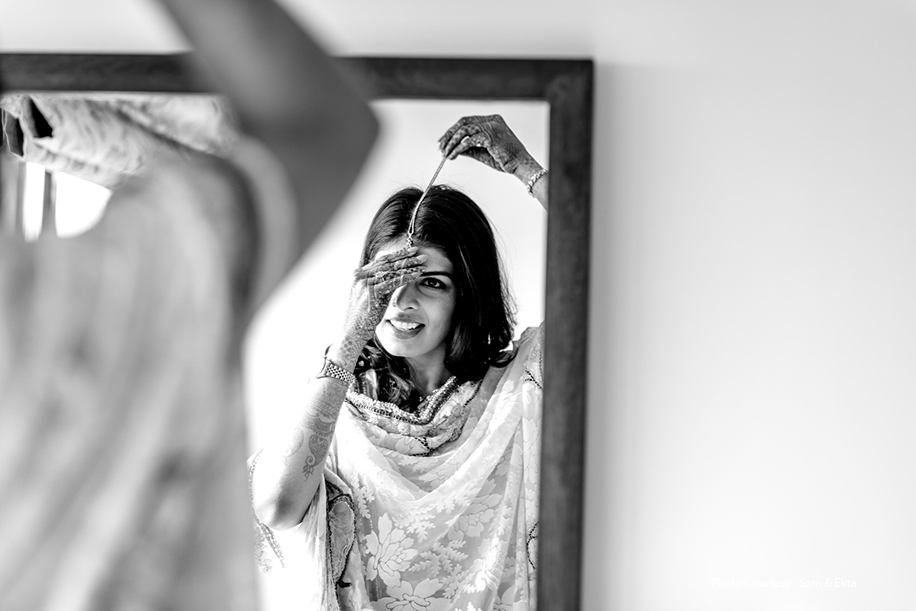 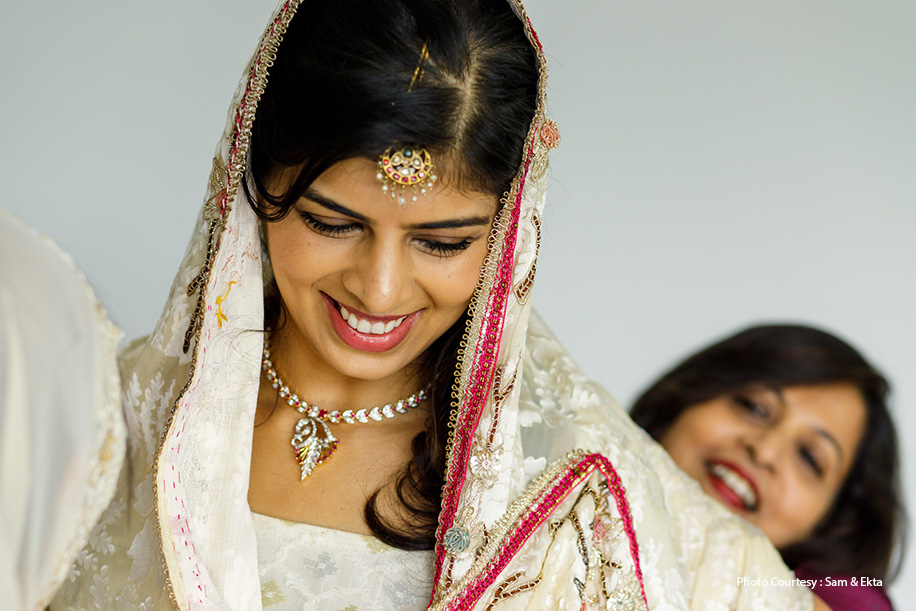 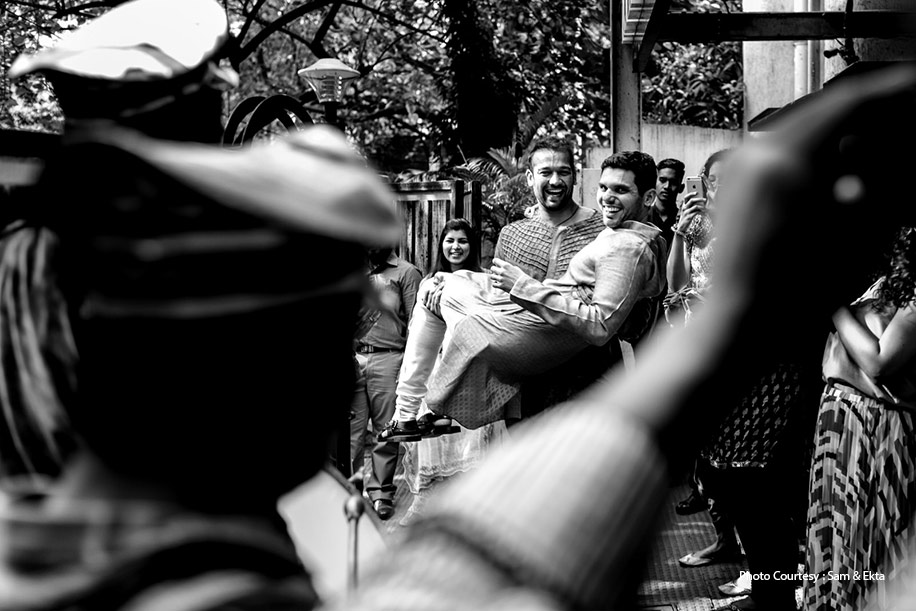 Wedding
At first, our parents were a little skeptical about the venue especially since it is considered to be one of the most haunted places in Mumbai. However, we laughed it off by saying that the ghosts there would not have had a good party for a while which gives us all the more reason to throw our bash there!

To create the perfect ambience, we spent a large chunk on lighting and supported that with florals. We also had a wonderful harpist play for us through the evening.

Our nikkah took place at sunset and the venue overlooked the sea. We always wanted to have our wedding by the water. We envisioned a poolside, but that was nothing compared to the view we had when we were getting married. We watched the sun sink into the horizon and it was just something no amount of money could have bought and no luxury hotel could have matched up to.

After we had taken our vows, our closest friends and family came forward to give their speeches and filled the evening with laughs. I wore a red lehenga by Nadine Dhody for this event. 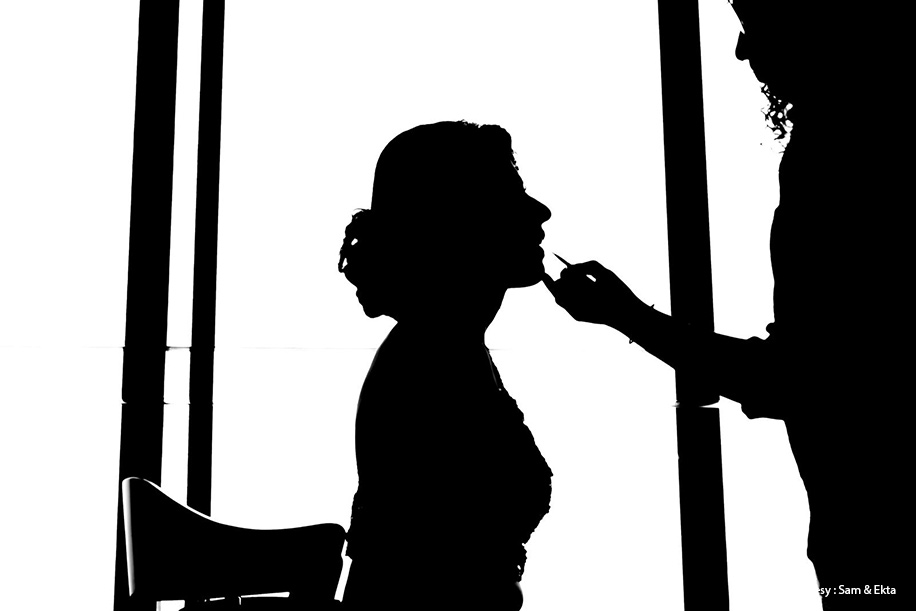 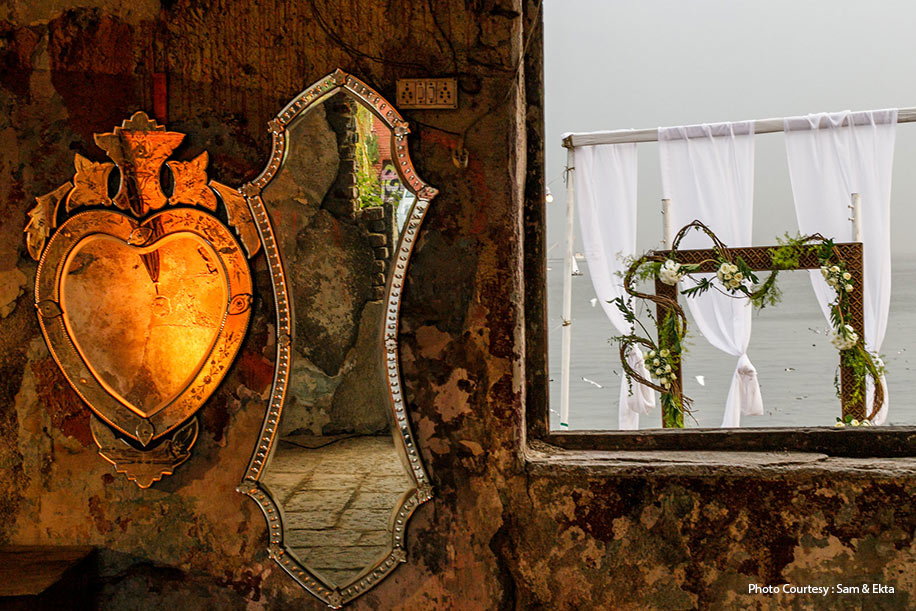 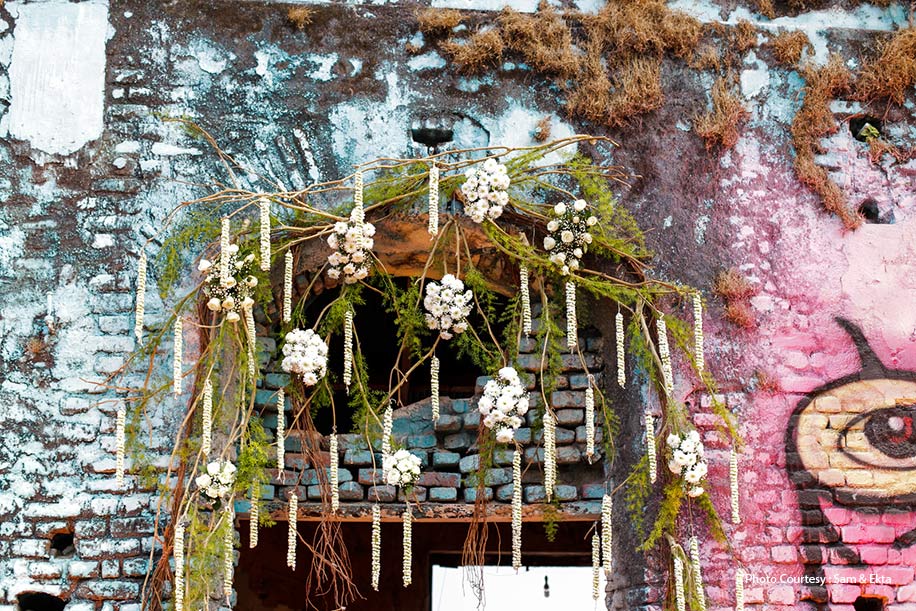 Reception
Once the nikkah was over, we moved our guests into an air-conditioned hall on the same premises. Some amazing Bohri food was the focus of our reception. We wanted to indulge our guests so we laid out some of the most popular dishes in the bohri thal dinner. 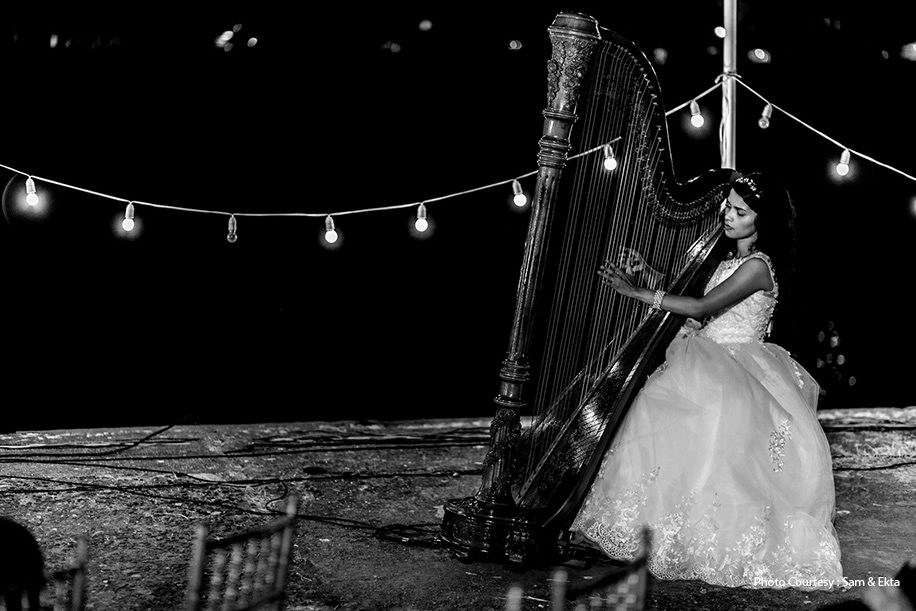 Advice To Couples
Too many cooks spoil the broth, therefore there has to be only one decision maker. You sure can go ahead and delegate the work to a group of people, but you can’t start asking every single one for their opinions. For our wedding, I took the call and ran it by my husband. When there are too many people involved in the decision-making process, you will try to be accommodating but eventually, you are bound to muck it up.