Shikha and Rahul's wedding themes were inspired by the boisterous revelry of Punjab and the vibrant hues and crafts of Rajasthan.

Udaipur, the City of Lakes, came alive with the dancing, music and fun at Shikha and Rahul’s wedding ceremonies captured by Picsurely held at the Radisson Blu Udaipur Palace Resort & Spa. 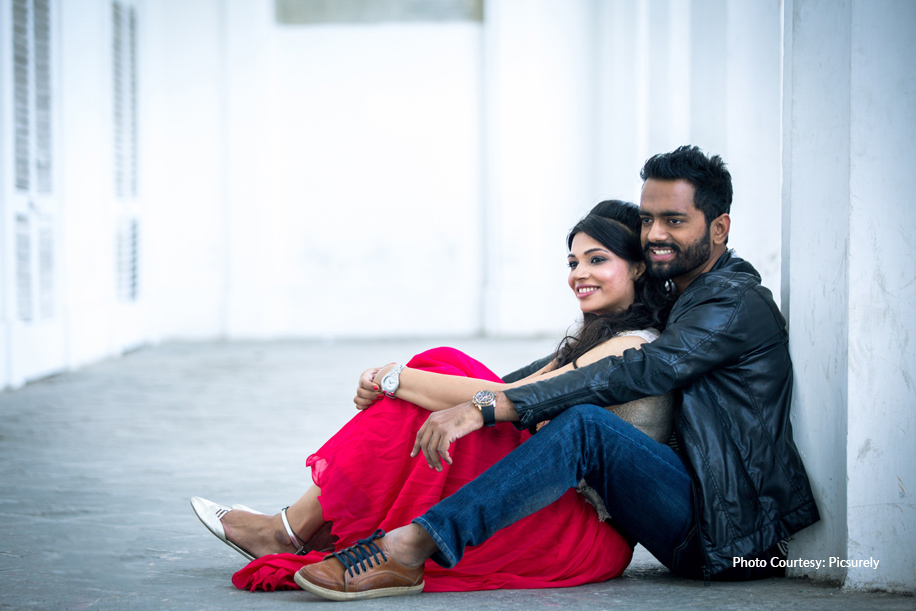 How We Met
“I met Rahul for the first time casually through a cousin and didn’t think too much about it after I came back home. That was around the same time that my father was looking for a suitable match for me. One day I heard that we had received a proposal from Rahul’s family and both sides agreed on meeting in Mumbai. When Rahul and I met each other this time, it was evident that we were meant to be. No violins played in the background as we fell for each other, but our hearts gave us all the signs. When people say that you go weak in the knees and feel butterflies in your stomach even at the mention of the name of the one you love, they aren’t exaggerating. After that meeting, it was evident that we were meant to be and both of us said a ‘Yes’ to each other. I look up to my father for the values he holds and the fact that I saw similarities between Rahul and my father was an added bonus!” 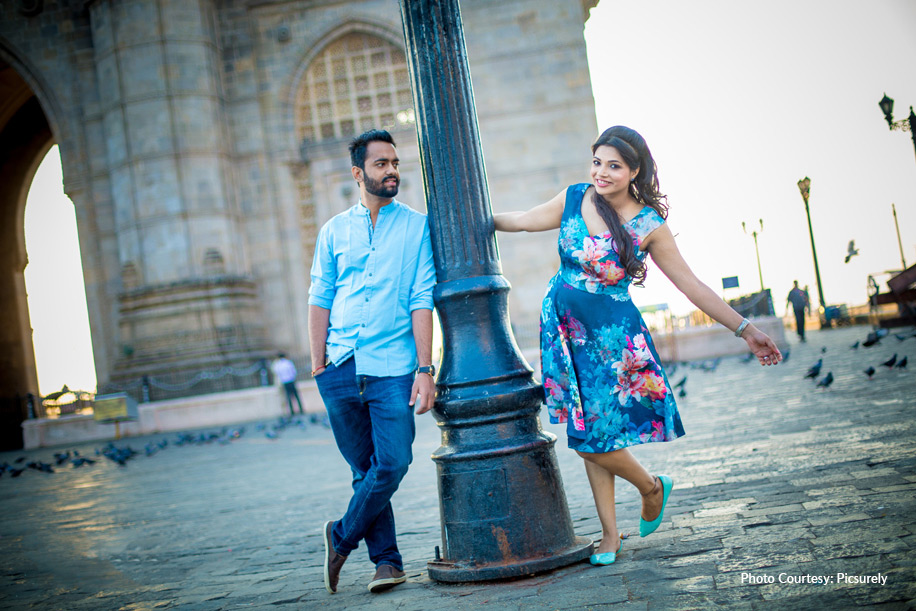 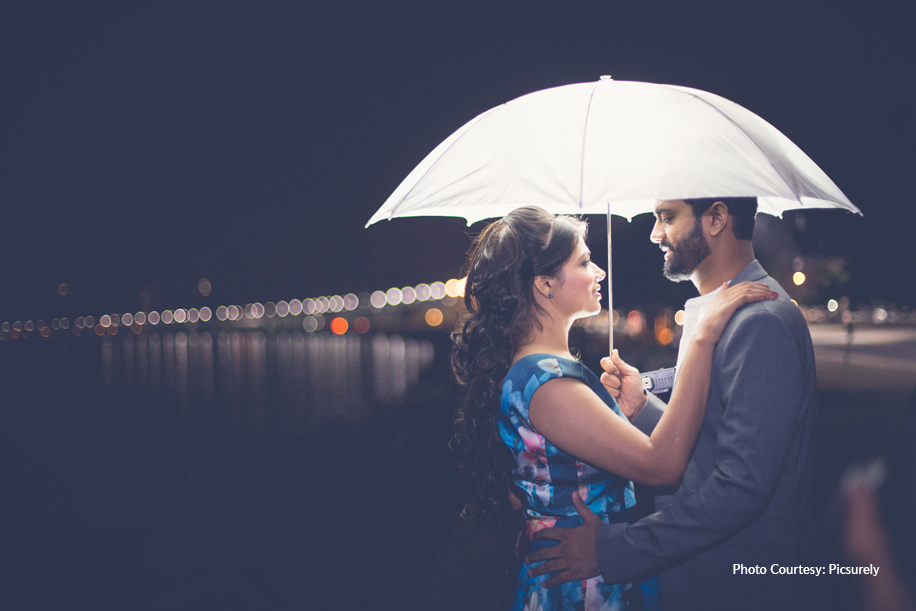 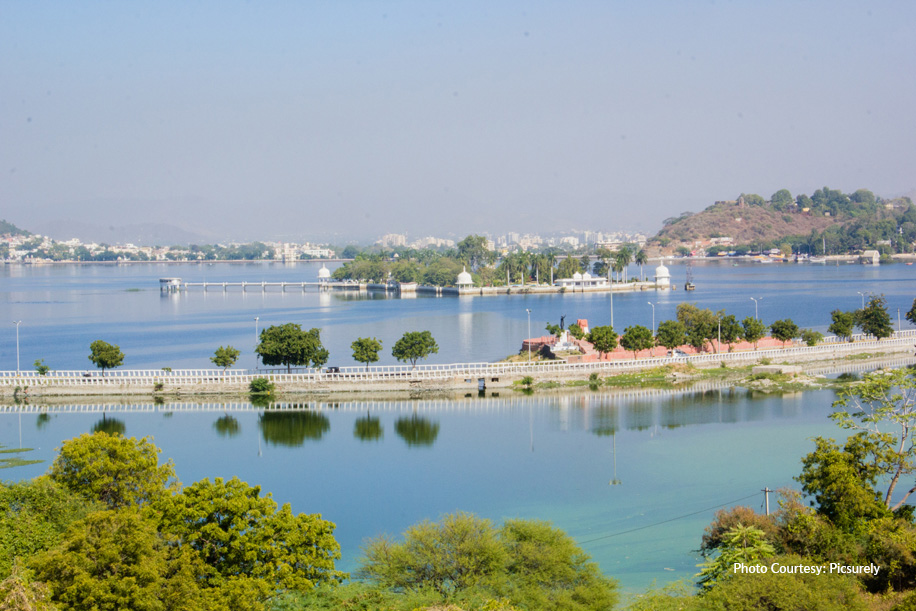 Mehndi
“We had two mehndi functions. The first one was organized on a small scale in Jaipur before we left for Udaipur. The other one took place at the Radisson Blu Udaipur Palace Resort & Spa and was inspired by the vibe of boisterous Punjab. For this function, the venue was decorated in vibrant colors to mark the beginning of the festivities. We had ‘bhangra’ (traditional dance from Punjab) dancers and ‘dhol’ (ethnic drums) players adding a touch of revelry and authenticity to the event. We even incorporated colorful ‘parandis’ (fake plaits with tassels) and oil lamps and lanterns that are typical of the Indian countryside into the decor. I matched the vibe by wearing a bright green Patiala suit with a contrasting bright pink dupatta, while Rahul wore a cream waistcoat with orange floral motifs over a matching peach kurta and a pair of white churidaar-style trousers.” 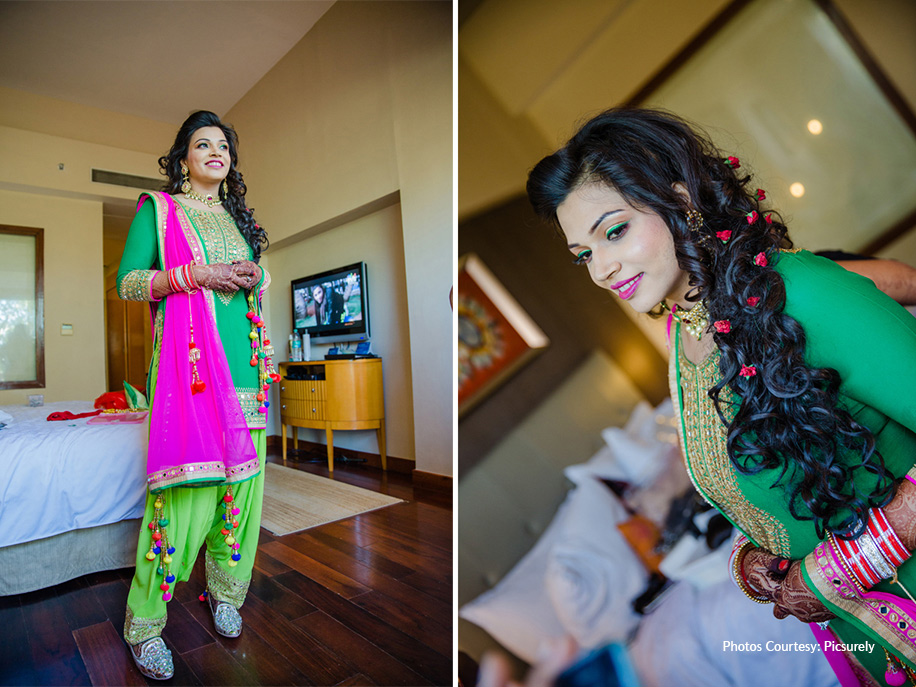 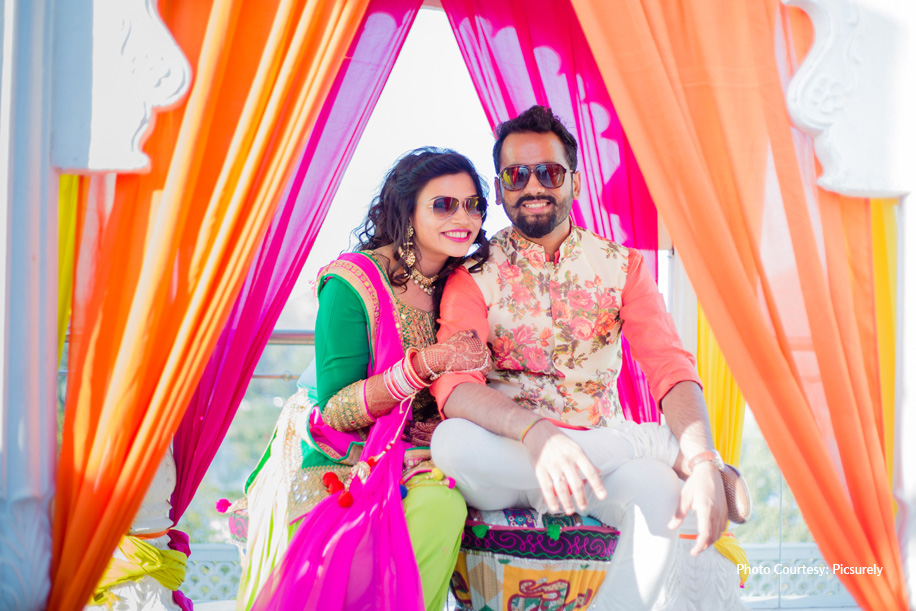 Sangeet
“Our ethnic mehndi function was followed by a retro-themed sangeet. We had a lot of dance performances and acts to liven up the event. It was so heartwarming to see everyone’s enthusiastic participation in making our wedding so special! Once we through with the line-up for the evening, the DJ took over and kept us dancing until the wee hours of the morning.” 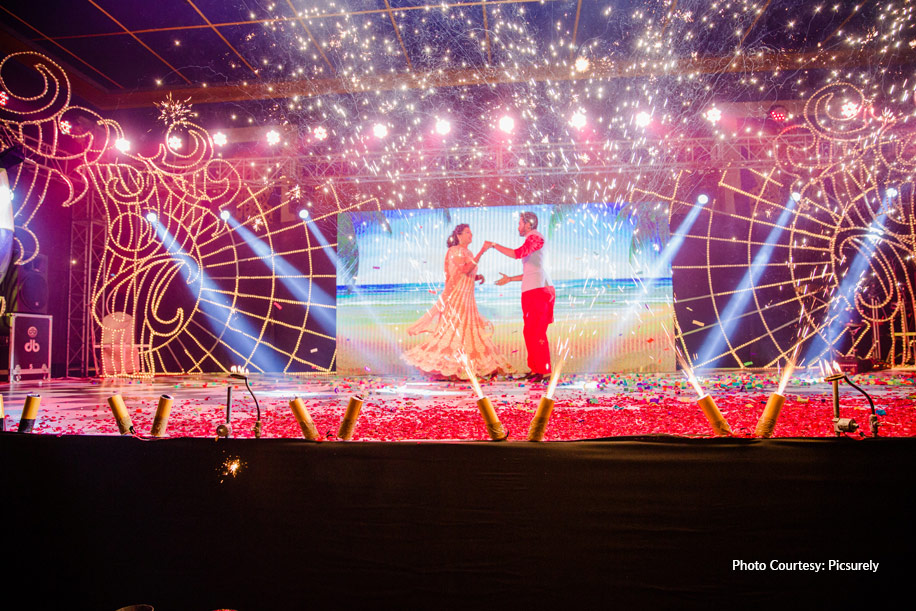 Haldi
“Our ‘haldi’ (turmeric application) ceremony was a tribute to the carnivals of Rajasthan. Various props were used to decorate the outdoor space that we had chosen as our venue for this function. We invited traditional ‘mela’ (fair) performers to the function to keep the guests entertained. I decided to go with a red sharara ensemble for this ceremony. Since the theme was inspired by Rajasthan it was only fitting to incorporate some details of the state into my outfit. Therefore, the work on my sharara was done using golden and silver gota patti.” Wedding
Our wedding followed a red and golden color scheme and the venue looked stunning in the evening. Our mandap was constructed on the lawns of the hotel. The entire structure was draped in red and there were beautiful floral wreaths with strands of white and red blooms dangling down which created a striking effect. For the ceremony, I wore a red lehenga with orange and green accents, while Rahul wore a blue sherwani with ornate silver threadwork. He also wore a red turban and matched it with a red statement necklace.” Advice for Couples
“Be quirky as you want on your wedding and pamper yourself as much as you can. Since you are going to be quite busy, try and stay healthy, happy and stress-free on your big day.”