Shilpi and Sagar at The Shiv Vilas, Jaipur

Our series, ‘Featured Weddings’ brings you wonderful moments from weddings held at the finest venues across different cities. Here, bride Shilpi tells us all about how she met her soul mate and their wedding celebrations in Jaipur.

How we met
Shilpi and Sagar first met in 2010 at a common friend’s birthday bash and kept bumping into each other annually – for five years – on the same occasion. “We were just acquaintances until our friend suggested pairing us up. Our families got involved and approved but nothing clicked, so we went back to just greeting each other at our common friend’s subsequent parties,” Shilpi recalls. However, one fateful year they exchanged phone numbers and started a “Snapchat friendship”. “It took six months of chatting to realise we had a lot in common,” she adds.

Shilpi, a financial analyst with India’s Ministry of Finance, admits she is quite a “nerd”, yet a part of her loves all things to do with fashion and style. “I never miss a fashion event!” she declares. Sagar is very familiar with fashion and style as he started his career as a Gladrags model, but is now involved in his family business that, Shilpi says, involves a lot of number crunching on his part now!

Both were keen on having out-of-the-box experiences on their big day, and Shilpi shares some highlights of their elegant January wedding here. 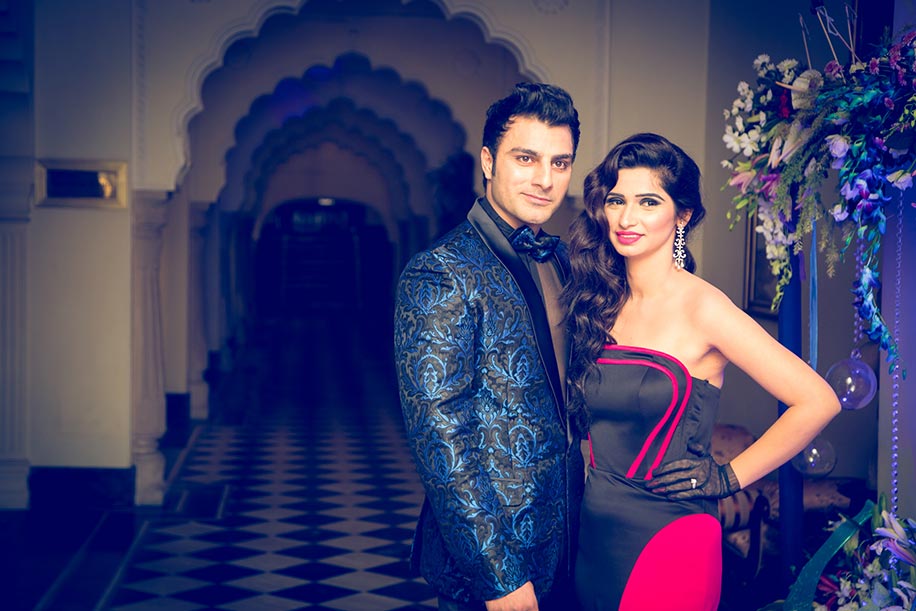 Wedding Venue and Decor
Shilpi and Sagar chose The Shiv Vilas in Jaipur for their Mughal-themed wedding. “We were keen on getting married in a palace and loved the Mughal fusion architecture of The Shiv Vilas. And out of all the palaces, it was probably the only one situated on the outskirts of Jaipur, so a DJ playing loud music late into the night was not an issue,” Shilpi explains.

The couple hired Raas Luxury Weddings as their wedding planner. All the themes for various ceremonies were planned beforehand and the décor was designed accordingly. Shilpi’s entire bridal trousseau – barring her mehndi ensemble – were customised and created by New Delhi-based Sikander Nawaz Couture.

The Engagement Ceremony
The engagement ceremony, held earlier at Hotel Pullman in New Delhi, had an Anglo-Indian theme where the men had to wear tuxedos and women had to don gowns. Shilpi looked radiant in her gold and purple gown, while Sagar looked every inch a gentleman in his finely tailored tuxedo. The pink and white colour scheme added a pretty touch to the engagement proceedings. 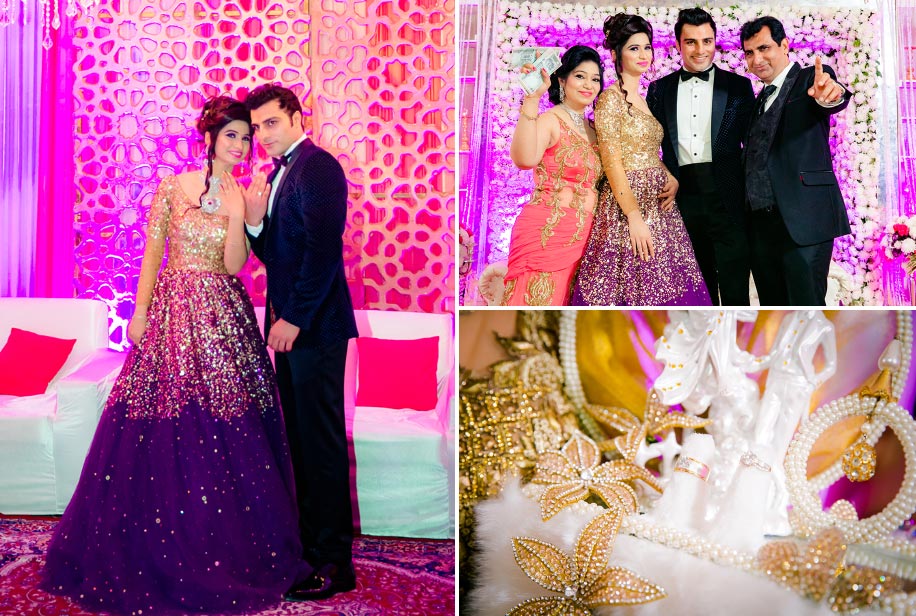 For the destination wedding in Jaipur, the couple planned interesting ‘entry’ concepts for different ceremonies. “At the evening sangeet, we had professional violinists clad in formal white gowns serenading us as we entered the venue. For the mehndi, the hit track ‘Jugni’ from the movie ‘Tanu Weds Manu’ had my bridesmaids dancing while accompanying me to the ceremony,” describes Shilpi. For the pheras, Shilpi wanted to break the norm of brides making a regular entry on a floral carpet. Like a Mughal princess, she had graceful ‘apsaras’ clad in beautiful lehengas and matching headgears dancing and escorting her to the grand stage as sparklers lit her path.

Bachelorette Party
Her ‘for youngsters only’ bachelorette party wowed guests, both male and female, with its Russian dancers and vodka shots served in syringes by ‘injection girls’. “I had always wanted a bachelorette party where only youngsters were present so I convinced my dad to have a separate party for the older people. He agreed, and the elders enjoyed beautiful qawwalis and mujra performances like Mughal nobility, while we danced till 4am to Bollywood hits spun by the DJ,” recounts Shilpi. She wore a beautiful black and pink gown for this Western-stye bash, while Sagar donned a black and blue brocade jacket with a matching bow tie. Mehndi Ceremony
The mehndi ceremony was a colourful daytime affair where one of the highlights was a unique photobooth. It featured a fashion ramp at one end – reflecting Sagar’s modeling career, while the other end had a stack of academic books and a signage that stated ‘Keep calm and party with an accountant’ – reflecting Shilpi’s profession. Indian Sufi singer Rekha Raj entertained everyone with her soulful mehndi songs. Sagar exuded class in his striking traditional attire, while Shilpi’s red lehenga with a glittery gold blouse and blue aviators exuded the right mix of funky style and photo-ready glamour. Even her squad of bridesmaids wore blue aviators and enjoyed a merry session against vibrant floral umbrellas that made up the décor. 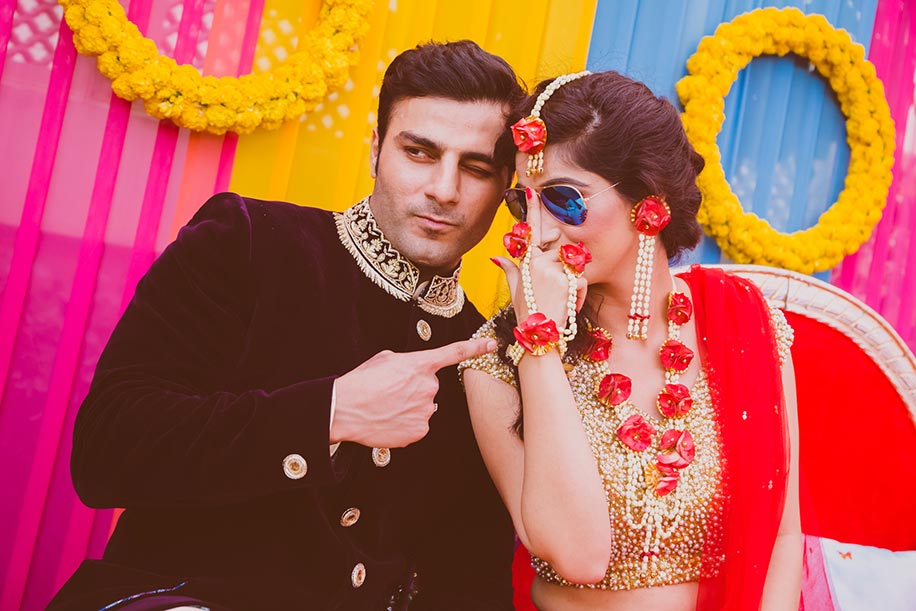 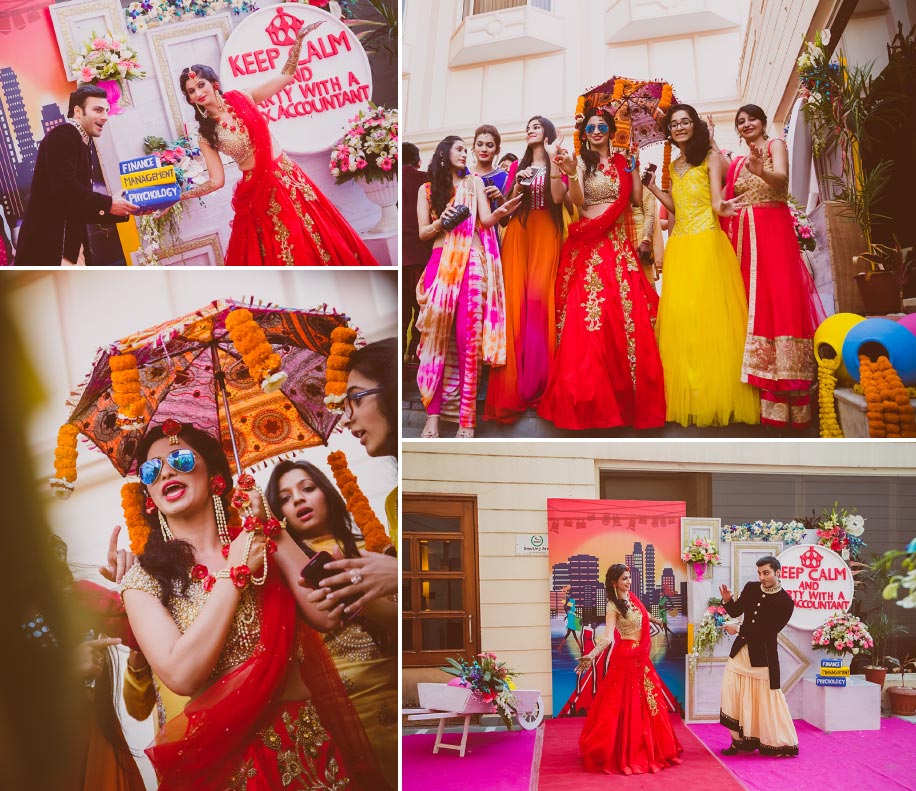 Sangeet
The sangeet had a Moroccan theme and the evening environs were lit up with beautiful lamps and hookahs. “Sagar and I wore matching green ensembles for this event,” shares Shilpi. Her rich green lehenga featured silver and gold motifs in a richly embroidered panel. Sagar was impeccably attired in a green sherwani with matte gold embroidery that matched his trousers and complemented Shilpi’s look perfectly. The couple and the guests let their hair down to the beats of DJ Wicked’s tracks while singer Bhanu entertained all with entertaining melodies. 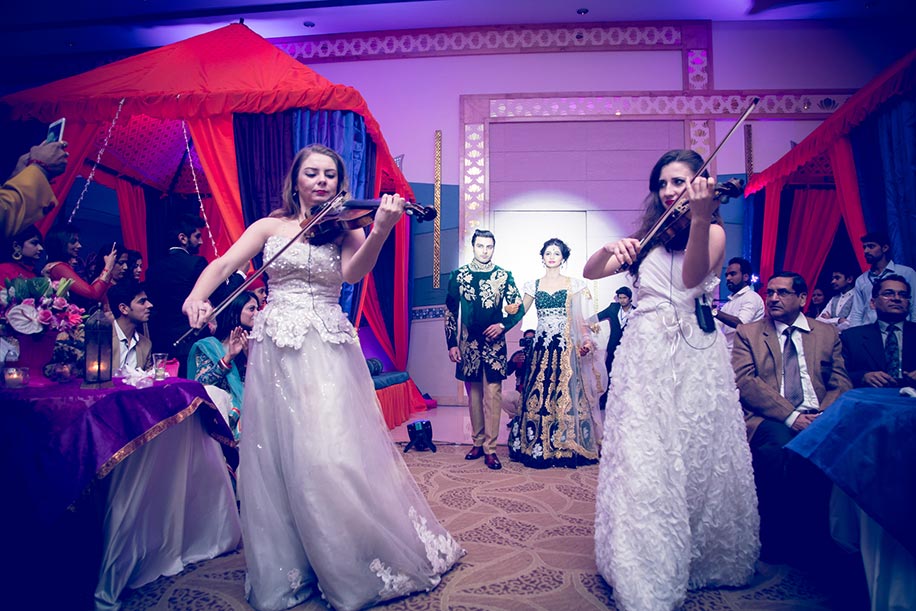 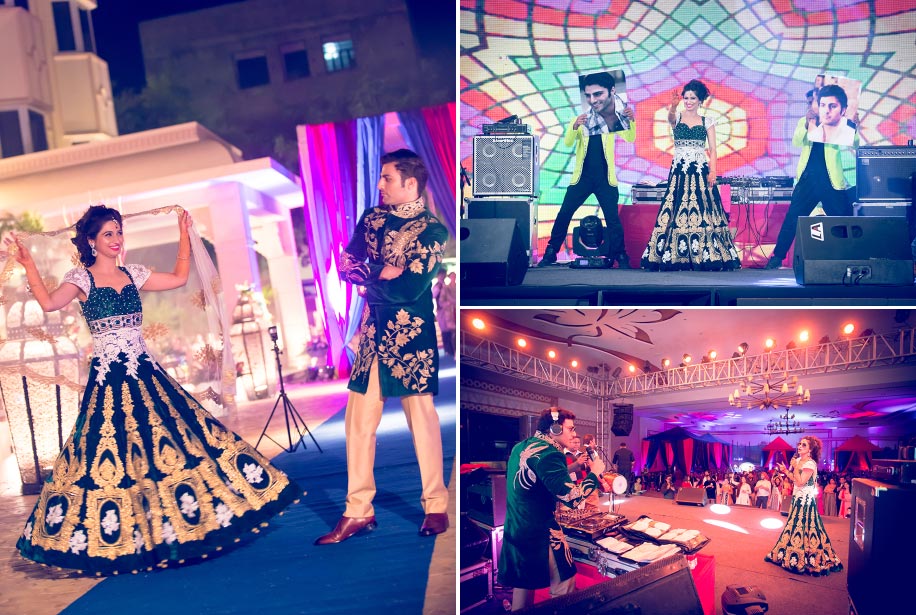 Wedding Ceremony
For the grand Mughal-themed wedding, Sagar opted to make a grand entry in a vintage car hired from Jaipur. “He is against hurting animals as he knew how horses found loud noises unbearable,” explains Shilpi. The female guests at the wedding were requested in advance to wear maang tikkas or passas (jhoomars) to match the regal Moghul theme of the elegant occasion. The band Shunya added to the atmosphere of festivities with their memorable tracks.

For the wedding, Shilpi chose a deep maroon lehenga with all-over gold embroidery and a net dupatta with an ornate border. It matched Sagar’s ethnic attire which included a long deep maroon jacket with intricate gold embroidery. Shilpi also wore an elaborate maang tikka, but rues the fact that she forgot to pack her nath. “It will always be a regret as I won’t have the chance to ever wear it again.” Her tip for brides heading for destination weddings? “Make sure you pack your stuff for different events together so there is no chance of anything missing or being overlooked on your special day.” 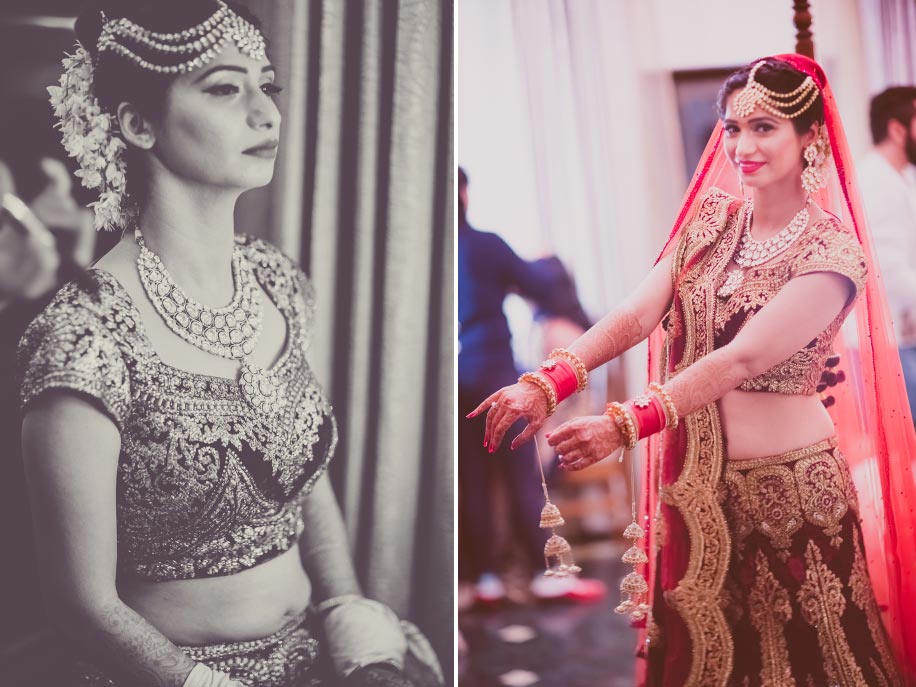 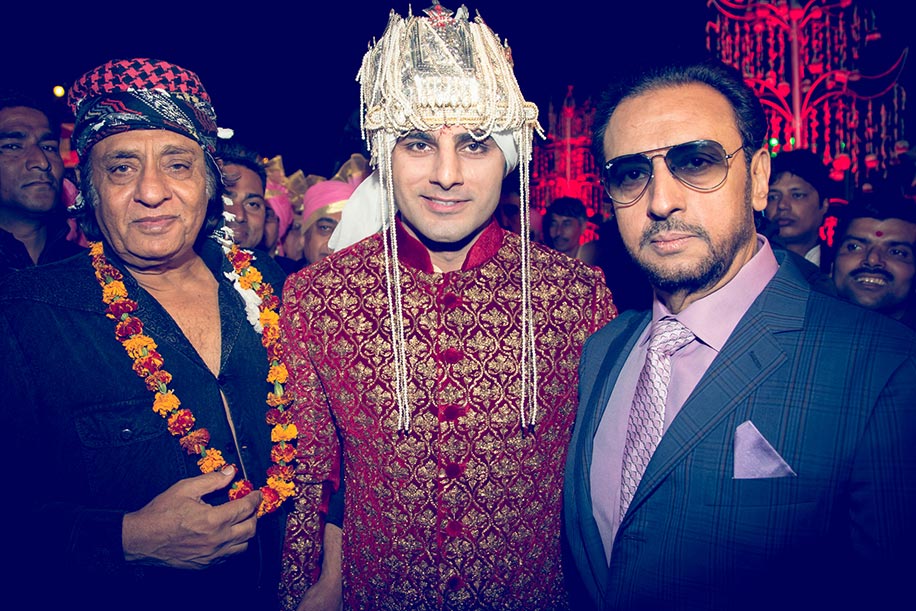