Known for its legendary heritage and luxurious amenities, Umaid Bhawan Palace has become a favorite venue for celebrity weddings such as that of Priyanka Chopra and Nick Jonas. It also hosted the wedding of Rohit Navale and Shruti Kharbanda, who is the daughter of veteran Bollywood actor Kulbhushan Kharbanda. Rohit is the VP of the Sinhgad Group of Institutes. The celebrations planned by WeddingSutra Favorite – Perfexion Events were regal and elegant in every sense, and its beautiful moments were captured by another WeddingSutra Favorite – Cupcake Productions. 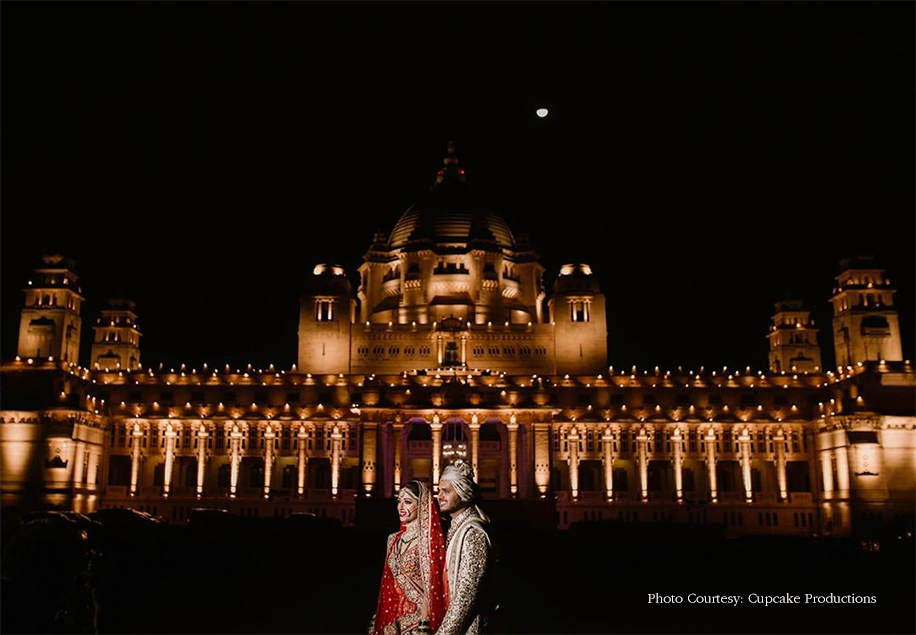 How They Met
Shruti and Rohit met through a common friend in 2011 and were friends for four years. Over dinner one random evening, they realized what they shared was more than just the bond of friendship. Sparks flew between them from there on, and thus began their courtship period.

The Proposal
It was after two years of a strong, loving relationship that Rohit decided to take his lady love for a trip to Jodhpur. Shruti was taken by surprise when he revealed the location for the trip – Umaid Bhawan Palace. The couple enjoyed the luxuries of the hotel and relished a romantic private dining experience at Baradari. After dinner, Rohit decided to surprise Shruti with the proposal and asked her to marry him! After a few seconds, Shruti said, “Yes!” They got officially engaged a year later in Pune.

Wedding Venue
Rohit and Shruti decided to tie the knot at the very location where he had proposed to her. Besides playing a monumental part in their story, the grandeur and opulence of the Umaid Bhawan Palace in Jodhpur made it an easy choice as their wedding venue. 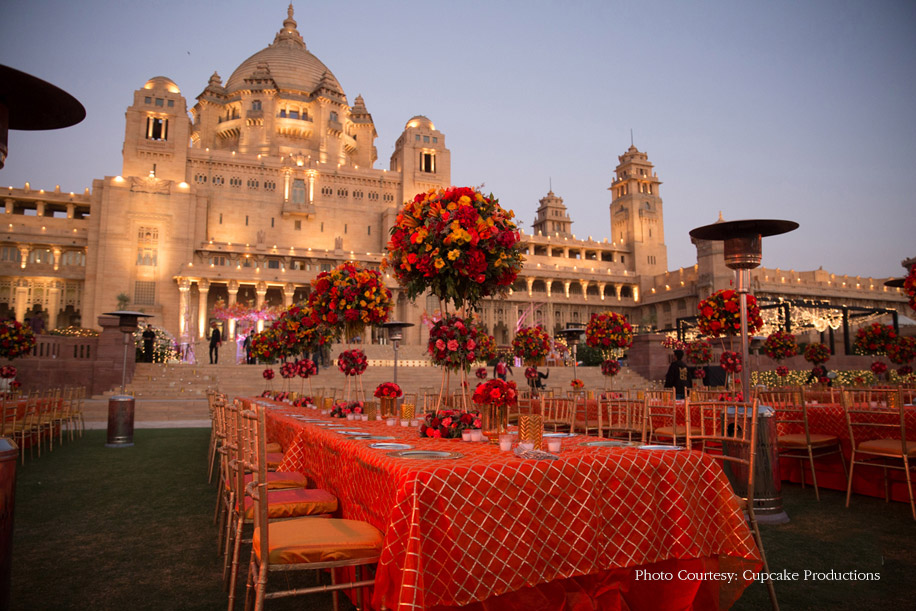 Haldi
The haldi ceremony was the first of the couple’s many wedding celebrations. Hosted for an intimate guest list, the event saw traditional decor in the form of orange marigold blooms and dreamcatchers dangling from the ceiling. The little traditional touch added to the auspicious vibe of the event. The seating for the guests had mustard colored sofas and table cloths with white Chiavari chairs propped against them. The entire area was covered with colorful drapes, which added a vibrant vibe to the venue. Mehndi
Pristine whites enamored the guests at Rohit and Shruti’s mehndi ceremony. The canopy set up around the stage included a white cut out background, pastel flowers and a pale powder pink sofa with white tuberose and yellow rose streamers extending from the roof. The couple wore complementing light powder blue outfits which offered a stunning contrast to the sturdy and rustic backdrop of the Umaid Bhawan Palace. The white tent set up for the lunch area also included a classy and contemporary touch to the chairs along with white floral arrangements. The highlight of the soiree was singer Hardy Sandhu’s thrilling live performance. 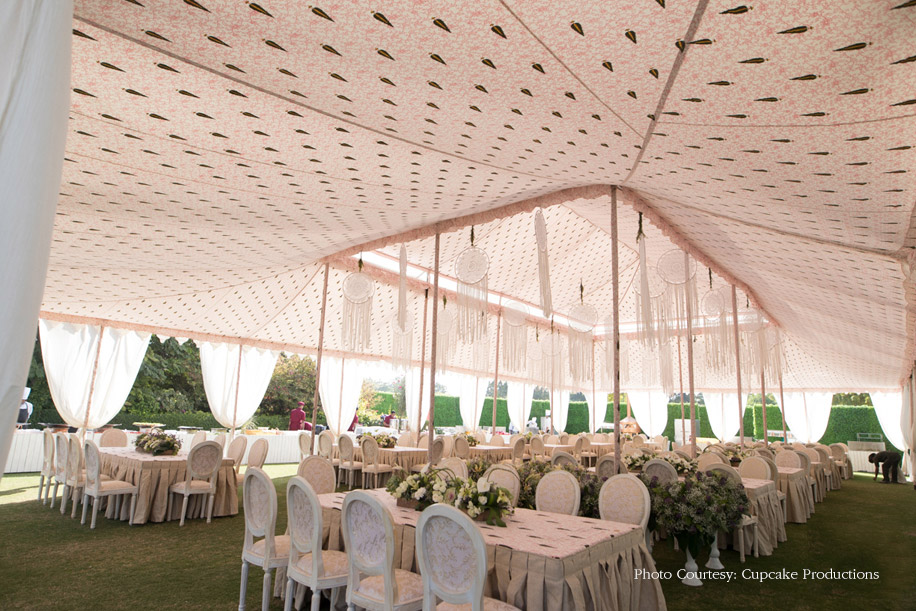 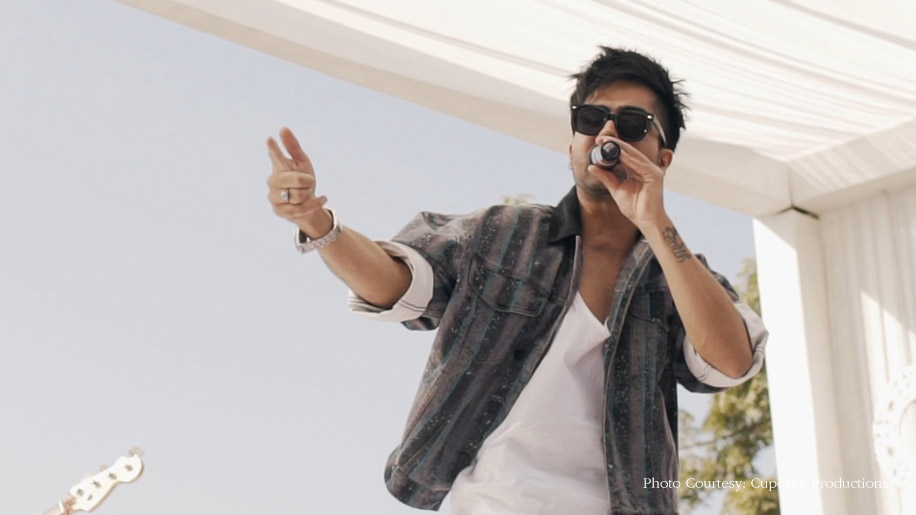 Sangeet
The sangeet was the grandest pre-wedding ceremony amongst all the celebrations hosted in honor of the happy couple. The stage for the function was erected on the lush lawns of the palace with colorful neon flashes and hundreds of tiny lights and lanterns brightening up the place. The tables were surrounded by crystal clear Chiavari chairs and elaborate floral centerpieces. The couple looked stunning together, and their guests cheered for them heartily. The other exciting highlights of this musical event were entertaining performances by Jay Sean and Juggy D, alongside the presence of TV star Mandira Bedi. 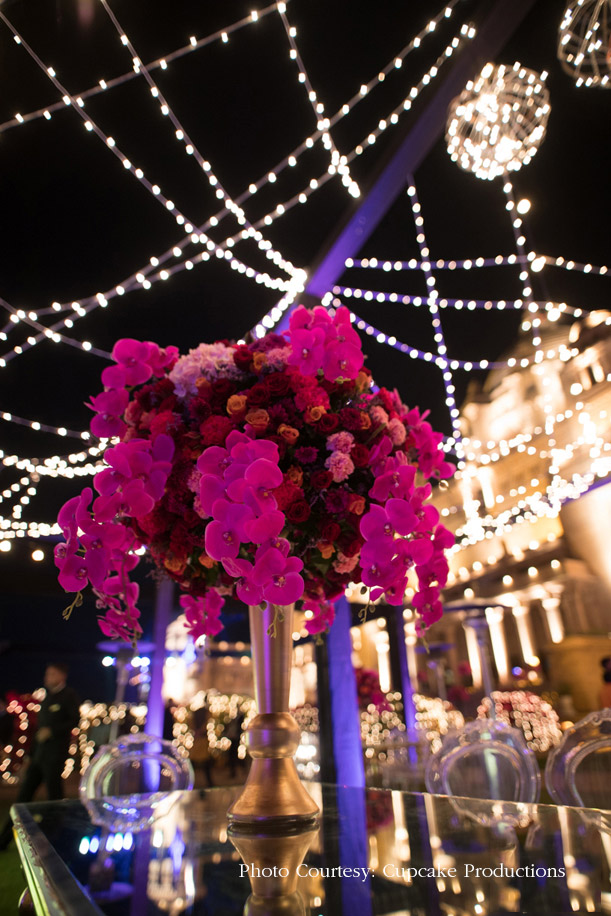 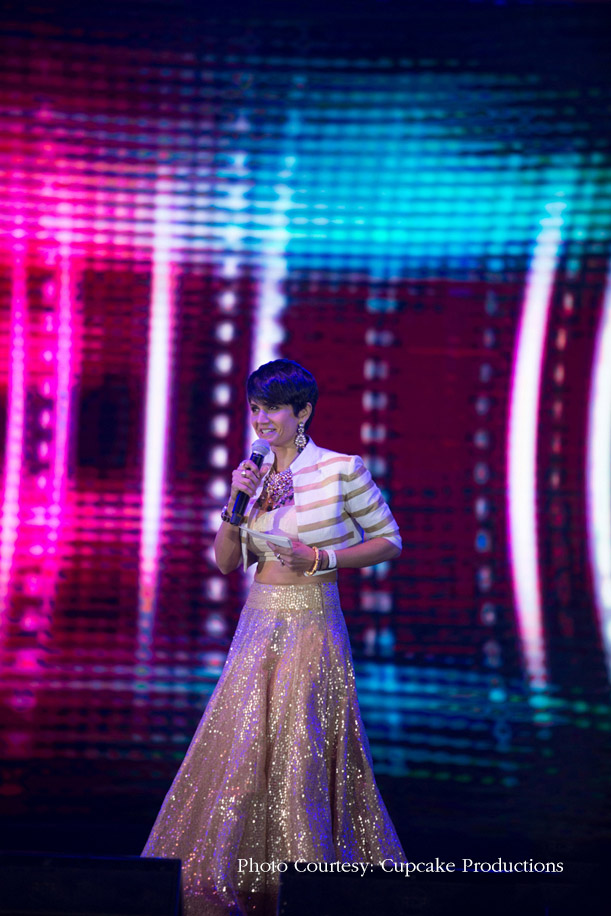 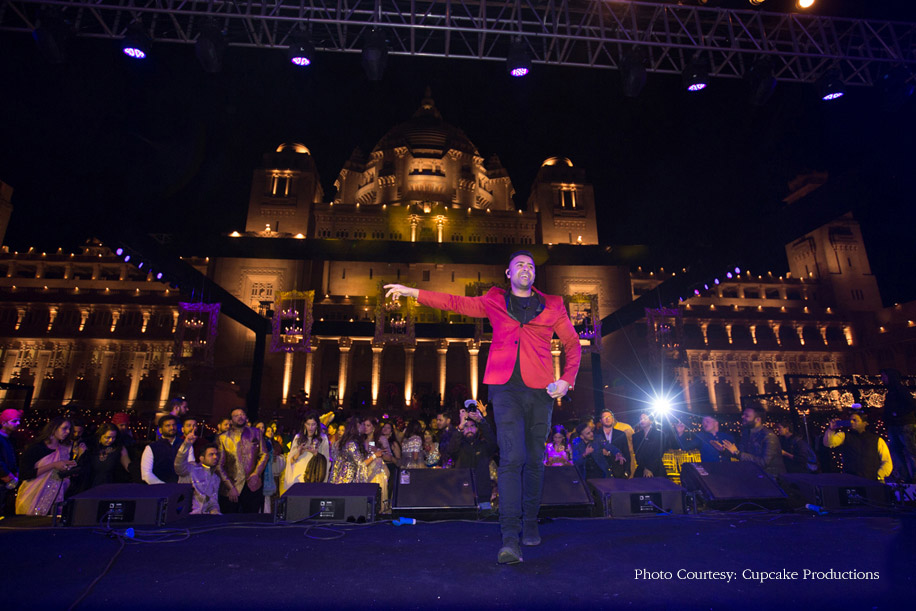 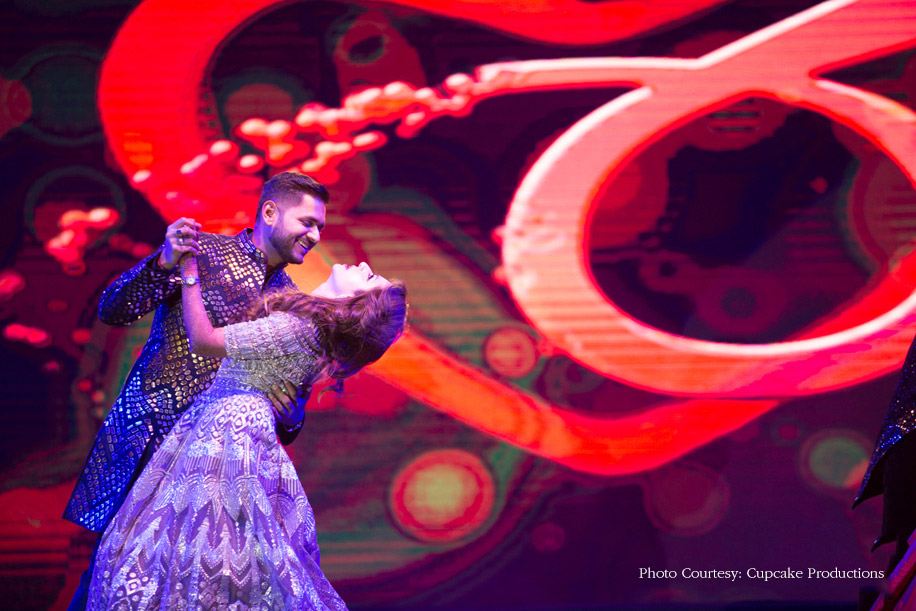 Wedding
The entire Umaid Bhawan Palace was lit up in celebration of Rohit and Shruti’s nuptials. Auspicious shades of red, orange and yellow ran through all the elements of the wedding. The decor and setup looked straight out of a Bollywood blockbuster and left the attendees impressed with its grandeur and opulence. Long tables were used to seat the guests which were lined with an ornate orange tablecloth and floral elements, gold Chiavari chairs added to the royal setting. A canopy was set up alongside the seating area where talented singer, Harshdeep Kaur and her team of musicians crooned musical melodies throughout the ceremony. The highlight of the decor was the mandap which exuded a regal vibe. Contrasting flowers in hues of red and pink were used against the pristine whites of the mandap, and marigold blooms accentuated the exteriors of its ceiling. Decorative crystal chandelier floor lamps stood tall on each corner of the mandap with an extravagant floral chandelier placed in the center. The bride, dressed in a traditional red Sabyasachi Mukherjee lehenga, lehenga, while the groom looked princely in an embellished gold sherwani. While Shruti made her bridal entry on the hit song ‘Nachdi Phira,’ Rohit arrived dancing to the tune of ‘Bann Ja Tu Meri Rani.’ They sat under the beautiful mandap and took their oaths for a lifetime of love and companionship, one mantra at a time.