Shweta and Keshav trusted their families when it came to choosing a match and realized that they were soulmates when their loved ones got them to meet. Read more about their Rajput wedding held in Chandigarh whose photos were captured by WeddingSutra Favorite – Sunny Dhiman Photography. 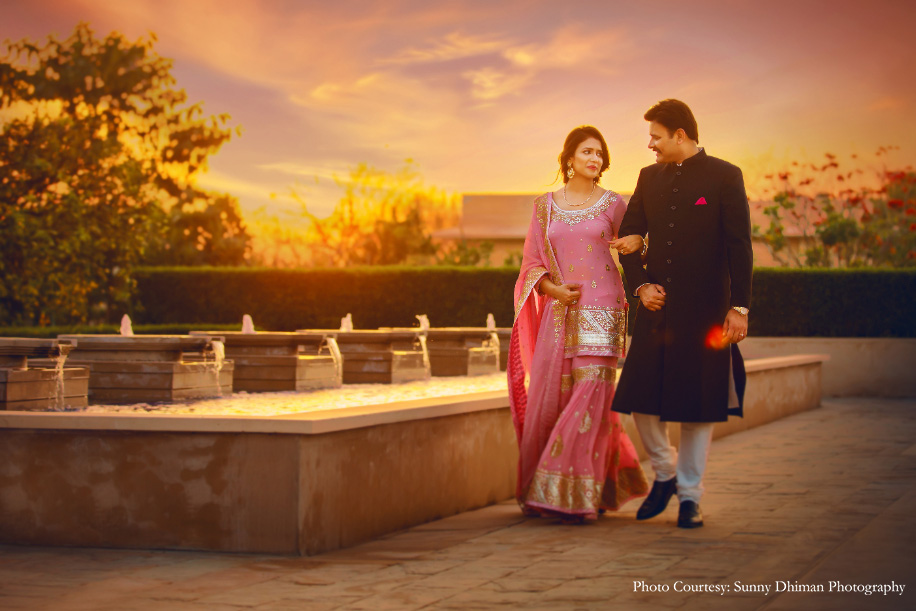 How We Met
Shweta shares, “Our story is a simple yet sweet one. Our families first got together and bonded well, after which Keshav and I met. We knew we were meant to be with each other after our first meeting itself. I guess the saying is true – when it’s right, it’s right!”

Wedding Venue
“Since we are based in Chandigarh, all the wedding functions took place in the city itself. The venue for our wedding was AKM Resorts. We saw other venues as well, but this one had everything we wanted.” 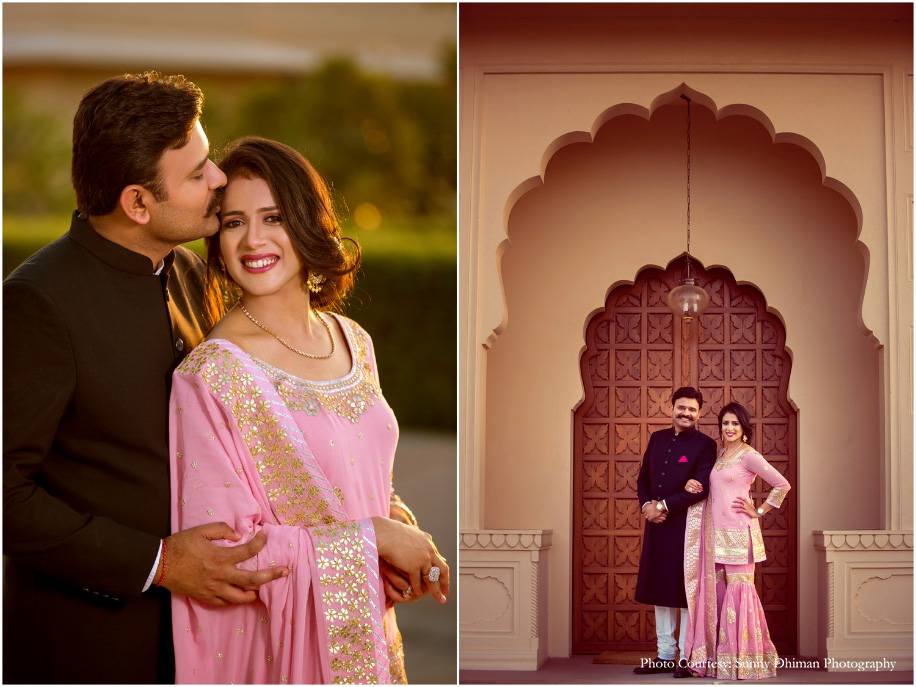 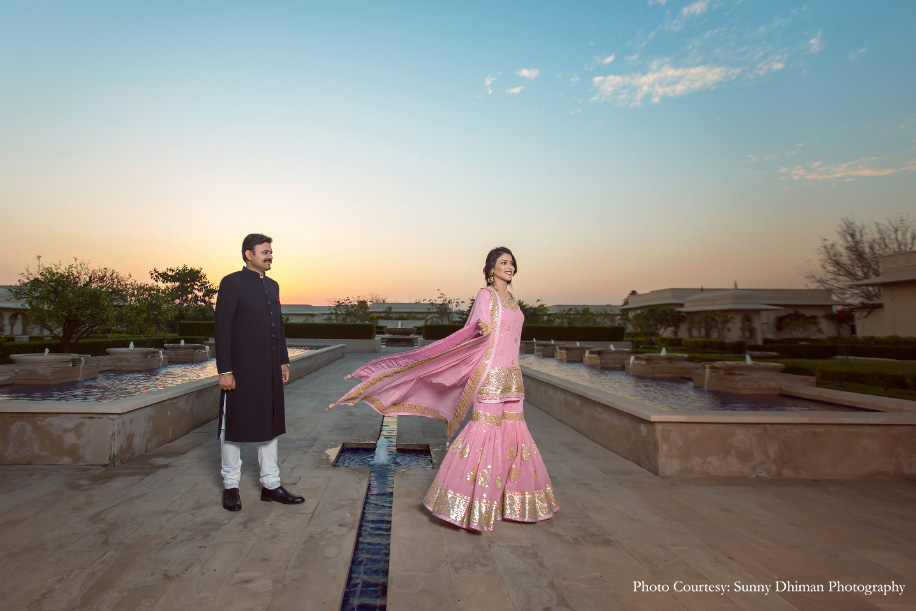 Engagement
The engagement was an intimate affair with close family and friends in attendance. The decor highlight was the floral arrangement that formed the backdrop at the couple’s sitting area. While Shweta dazzled in her glamorous ensemble by Payal Kayal, the groom looked dapper in a bandhgala outfit from East and West Designs. 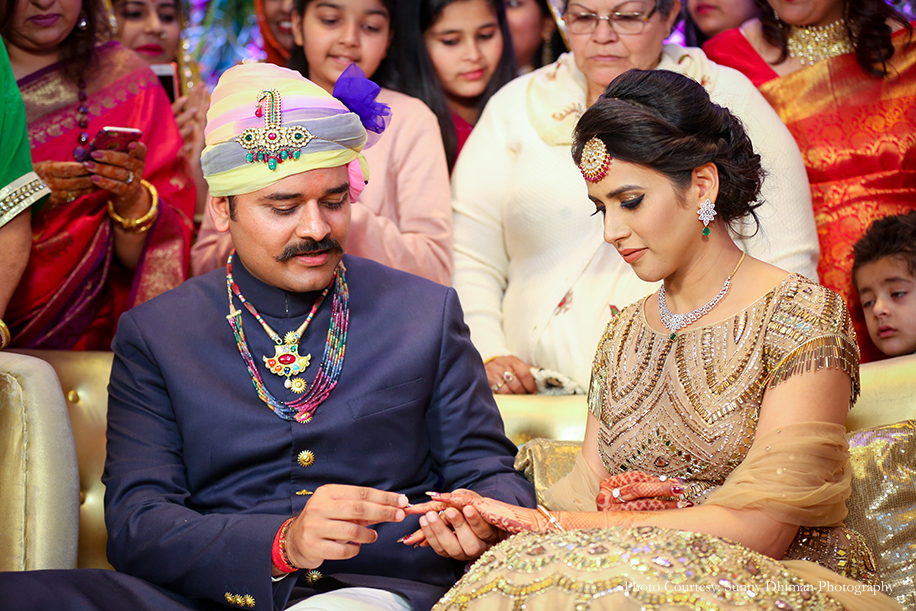 Mehndi and Sangeet
Ram Kumar from Delhi was the mehndi artist for this function. The mehndi function was at their home and was a close-knit family affair with a few friends. The decor was fresh and apt for the day function.The decor palette for these two functions included bright colors such as yellow, purple and pink. Fresh floral arrangements and pretty drapes added a carnival-like vibe to the decor. They also had family performances at this event. Shweta shares, “It was a night filled with music and fun! There were various performances by my cousins and friends but my favorite would be the performance that my parents did for me.” Shweta looked resplendent in her bright ensemble and beautiful floral jewellery.

While the bride had her own mehndi function, the groom’s side had their very own intimate mehndi as well. Keshav shares, “The mehndi function was a home affair. Sweet and intimate with all the family and friends joining us. Everyone enjoyed dancing to some great music.” 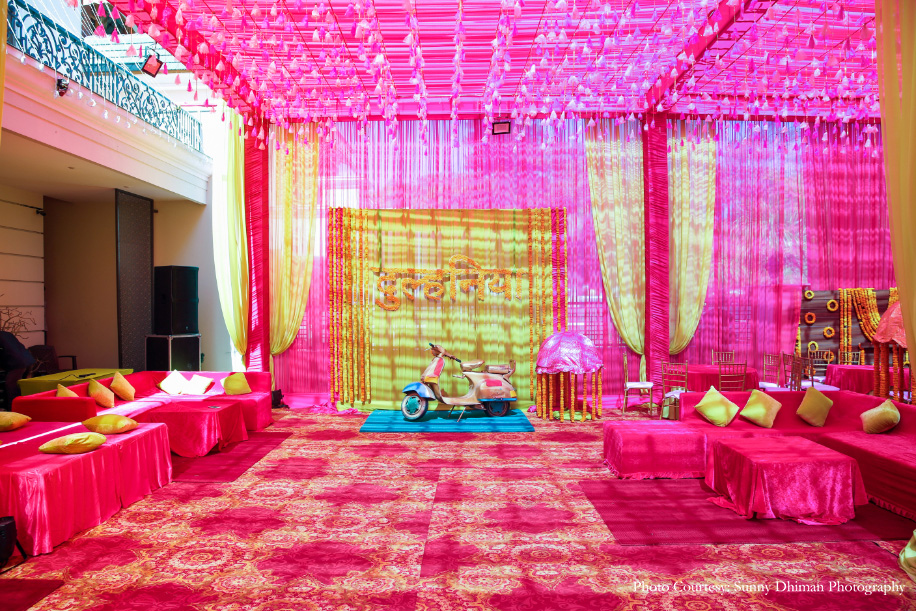 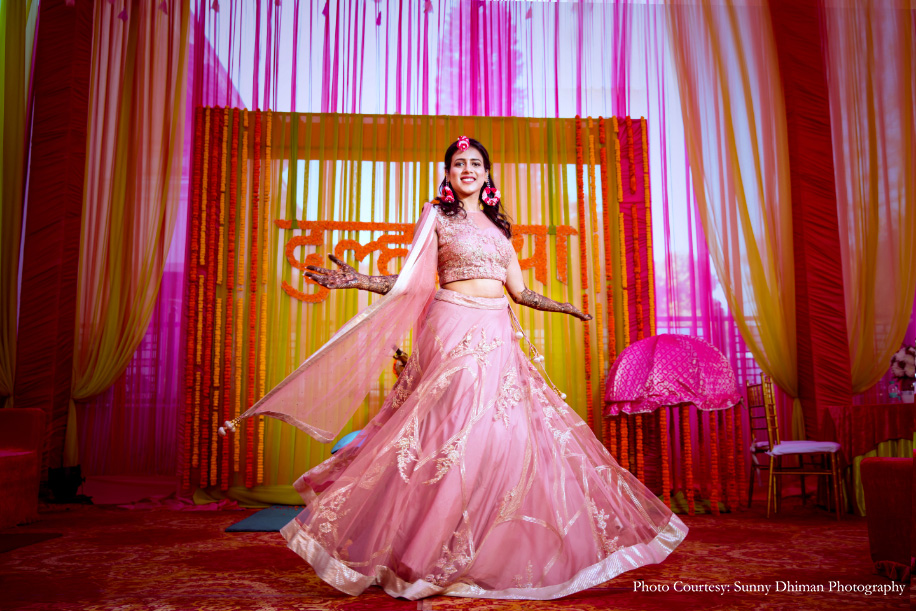 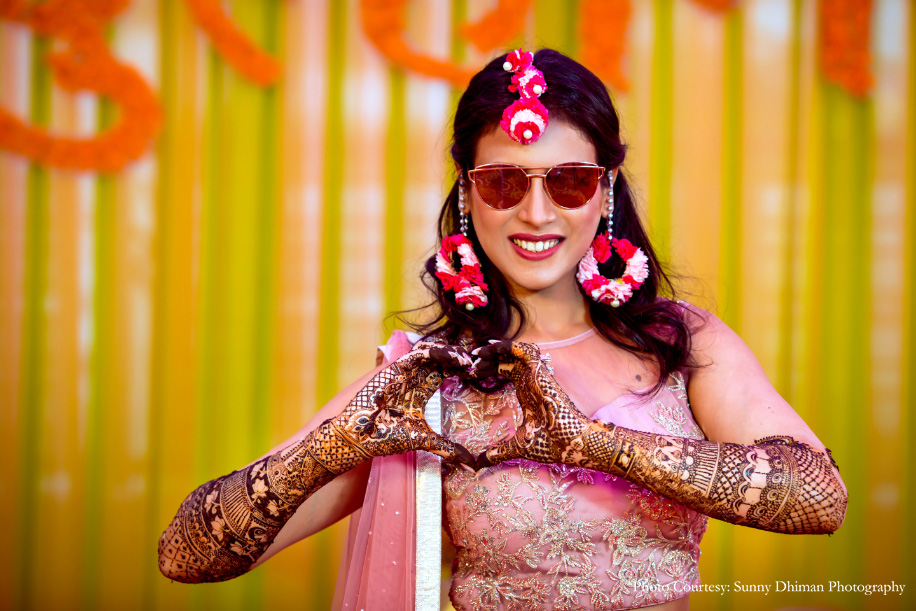 Cocktail
This was a party that took place on the groom’s side. Keshav shares, “Our cocktail was at gymkhana club in sector 1 MDC. It was a grand party with more than 600 people grooving to the mesmerizing performances by Garry Sandhu. There were various dance performances by my friends and cousins, all coordinated by my lovely sister. Apart from the performances, it was a night filled with great dancing and cocktails.” 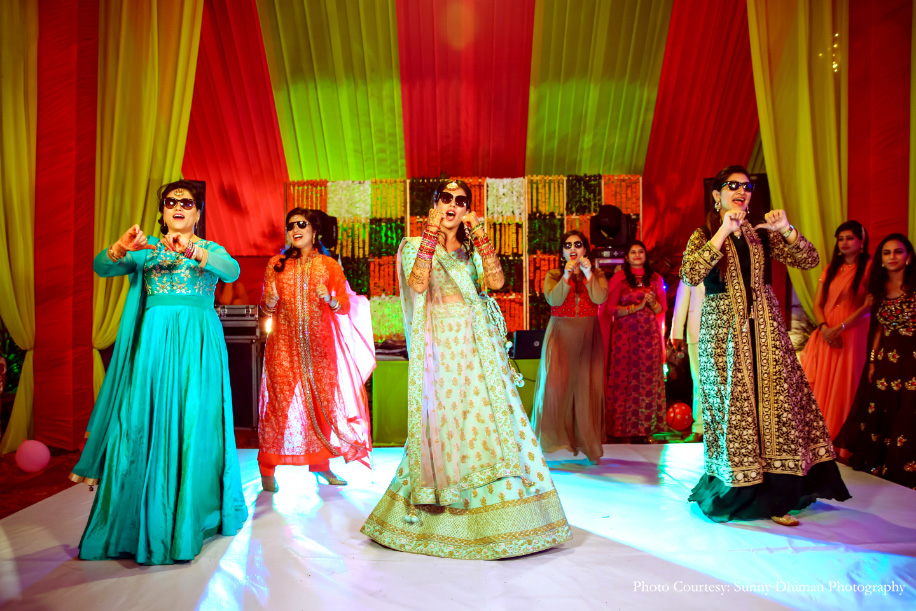 Band Night
Keshav explains. “This band night took place at our home and was one of the pre-wedding celebrations with friends and family joining us to make it even more special. We had the ‘Swastik‘ band perform that night. It was just another night of good food, music, and drinks!”

Wedding
Shweta shares, “The interesting fact about our wedding was that it was a traditional Rajput wedding. Since the attires were rather different, a lot of people mistook it for a theme wedding.” The colors used for the wedding were red, gold and white. The venue was AMK Resorts, and the spaces for the celebrations were regally decorated. Shweta wore a crimson lehenga, while Keshav donned a traditional sherwani and a majestic saffron turban. 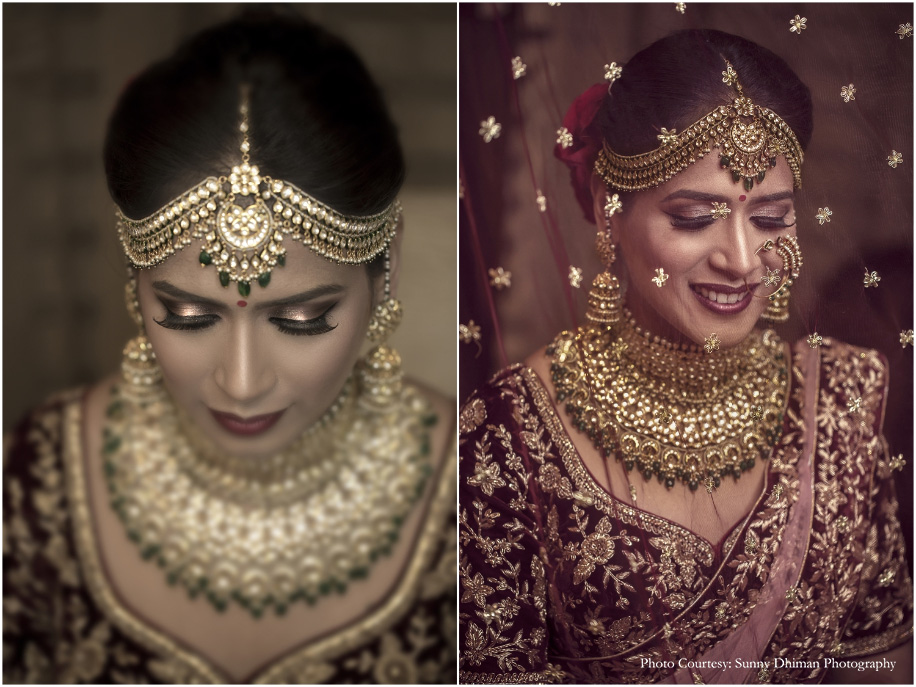 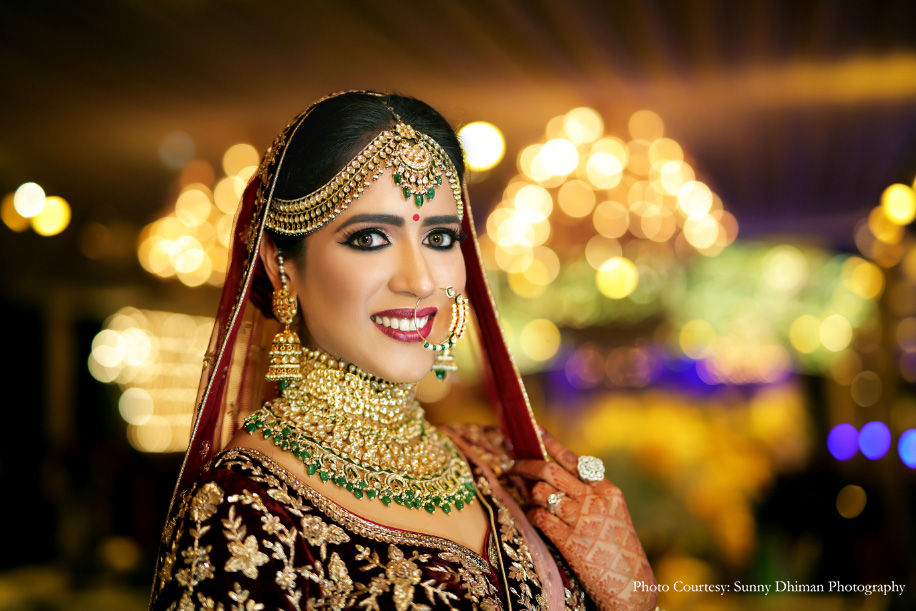 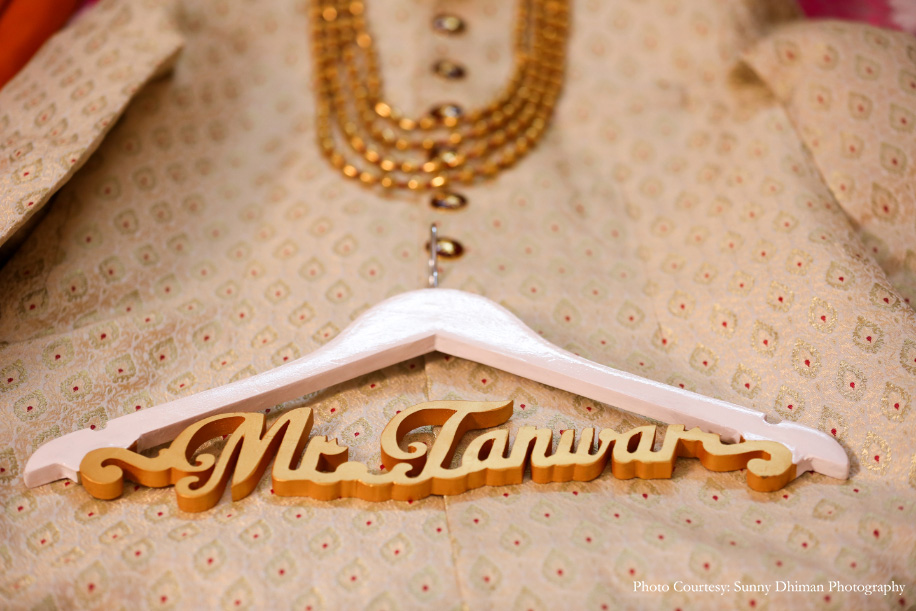