Based out of the picturesque island of Tenerife, Spain, Sian and Tarry’s paths didn’t cross till destiny intervened to bring these two souls together. Sian, originally hailing from Delhi and Tarry, a DJ and a wedding planner first met each other via friends and as time flew by their friendship blossomed into love. So, when the time came to take the plunge into marital bliss, this powerhouse of a couple, who already owned a budding wedding planning company, joined forces to create and execute their own nuptials which were a feast for the eyes. 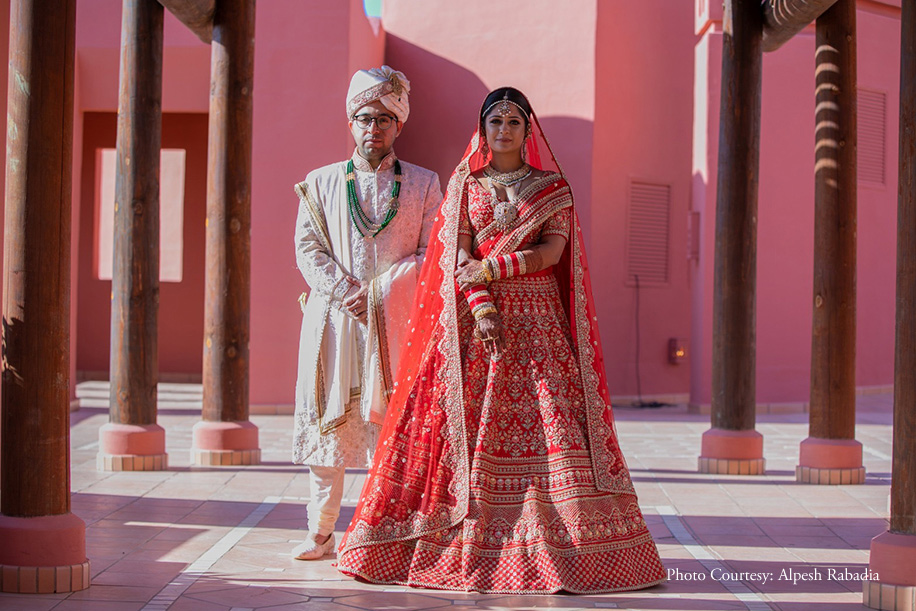 How They Met
The couple shares, “Even though we’ve been living on the same island for so many years, our paths didn’t cross even once. However, once they did, it seemed that love was just waiting to happen!

We first met via our best friends, who were in a relationship. Eventually, two of our other best friends also started seeing each other. It seemed as though the universe was trying to tell us something. And, as we started moving around in the same friend circle, we realized that we’re extremely compatible with each other. And as time flew by, our friendship slowly blossomed into love.” 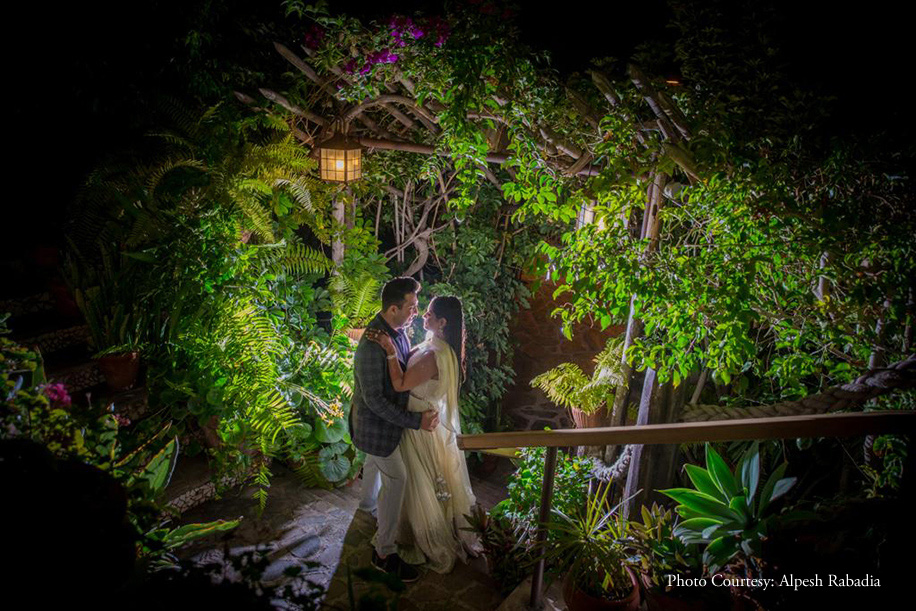 The Proposal
Sian shares, “Tarry popped the question to me in a surprise proposal during the launch of his first album.

On the night of the party, I got a call from Tarry where he informed me that the screens were not working in the club, and hence, we had to go there two hours earlier than originally planned to troubleshoot the issue. Feeling extremely nervous, I quickly got ready and made my way towards the club. Once there, I immediately started checking the screens and didn’t notice anything dodgy at all. That’s when Tarry told me to stand in the middle of the floor so that I could see the visuals as he played them. As he started playing the video, he came and stood beside me on the floor. For a few seconds, it was all normal and then suddenly, the video changed, and I could see Tarry on screen, saying the most beautiful things to me. Honestly, I hadn’t even been expecting a proposal, I just thought that this was his way of thanking me for all the hard work I’d put into organizing the party.

But to my utter surprise, as the video ended, a spotlight came on and he went down on one knee and asked the magical question. I was so overwhelmed with emotion and as I quickly answered with a ‘yes!’, the song ‘Perfect’ by Ed Sheeran started playing, cold pyros went off, the lights came on and all my loved ones burst forward through the back door. It was undoubtedly, the best night of our lives.” Wedding Venue
The couple shares, “Our wedding venue was one of the most magnificent venues on the island, The Ritz-Carlton, Abama. It’s a place that’s close to both our hearts as we’ve executed many weddings here and have a wide array of experiences working with its layout. Initially, we were keen on having a destination wedding, but our parents wanted to have it in our hometown. With mesmerizing views of the ocean and impeccable hospitality, the resort does transport you to paradise.” 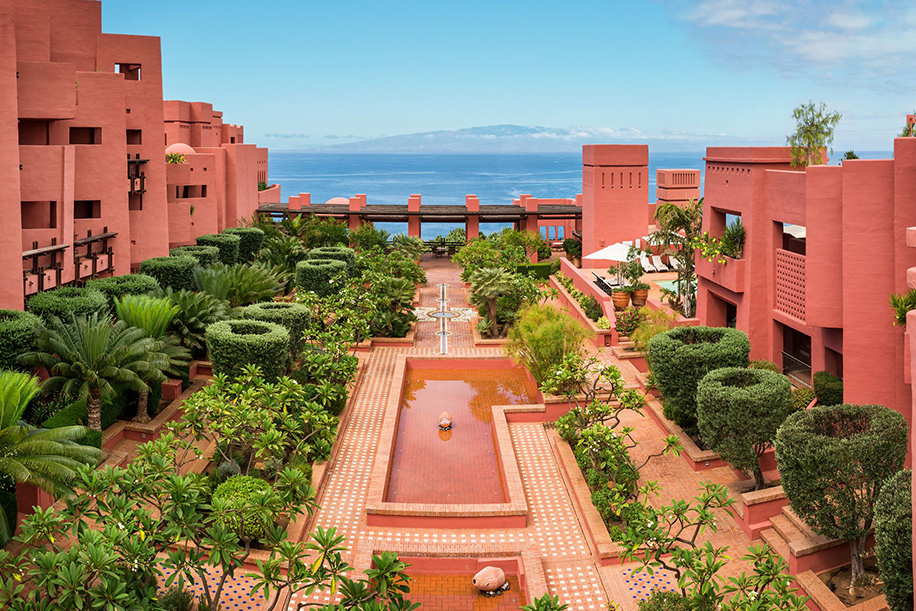 Wedding Planning
“Being wedding planners by profession, we chose to create, design, plan, and execute the whole wedding by ourselves under our company Smazing Events. Every detail was personally looked into by us and it took us an entire year to bring our vision to life. From solemn religious functions to the craziest parties, each function included a lot of thought and hard work which eventually paid off considering the amount of fun we had. Also, all our other vendors had also put their heart and soul into their work and the wedding wouldn’t have been possible without them.”, shares the couple.

On the photography front, the couple chose Alpesh Rabadia who captured each emotion with his skillful, well-composed candid shots. Videographer La Bamba Estudio also awed them with their sheer dedication that led to a heartwarming wedding film. Makeup artist Nelah Hernandez worked her magic on the bride to give her one stunning look after the other. Also, adding a volley of music into the event were DJ Sagar, DJ Sachy, Tappe Wali & Band Artists and The Dhol Company with their peppy beats.

Weddings Functions
Welcome Dinner
“Our welcome dinner followed a Spanish theme as an ode to our home town, and also to offer the international guests a taste of Spain. Along with delicious treats, we also had a live band to entertain the guests. Dedicated to our guests, this night was quite special as we were meeting many of our friends and family after a long time as many had flown in from different parts of the world.”, shared Sian and Tarry.

Mehndi
“Hosted on an open rooftop bar and surrounded by glorious views of the island, our mehndi was a hardcore Punjabi event where everything was completely desi. From the decor, food, cocktails to games, all the guests indulged in Indian creations that pleased their senses. However, the highlight of the event was the Tape Wali & Band who’d traveled all the way from the UK to be a part of our celebrations. With their melodic Punjabi boliyan, everyone was nostalgically transported back to India.”, recollects the couple.

Glowing in a peach and mint blue lehenga, Sian couldn’t resist shaking a leg and was also joined by Tarry who wore an off white embroidered bandhgala and white kurta for the occasion. 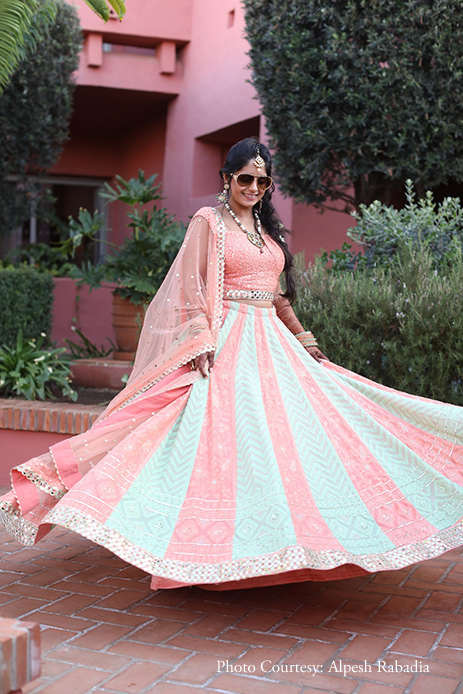 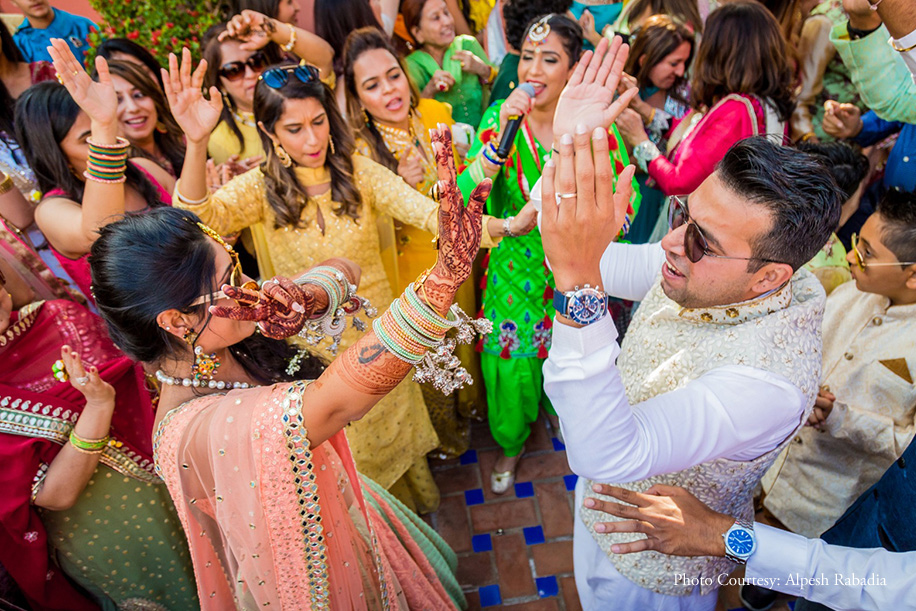 Sangeet
“Our Sangeet had a completely out-of-the-box LED concept where the decor and props were based completely on LED lights. With more than 15 artists, including DJs, tabla maestros, and violin players who’d flown in from various parts of the globe, this was a sumptuous, high octane affair! Additionally, keeping the theme in mind, we also had mirror men and LED robots who gave the venue a completely trippy vibe. We celebrated well into the wee hours of the night.”, the newlyweds shared.

Keeping it light and comfy Sian opted for a silver and white flowy gown paired with white sneakers. Taking a cue from his bride, Tarry also donned a white T-shirt with black trousers. 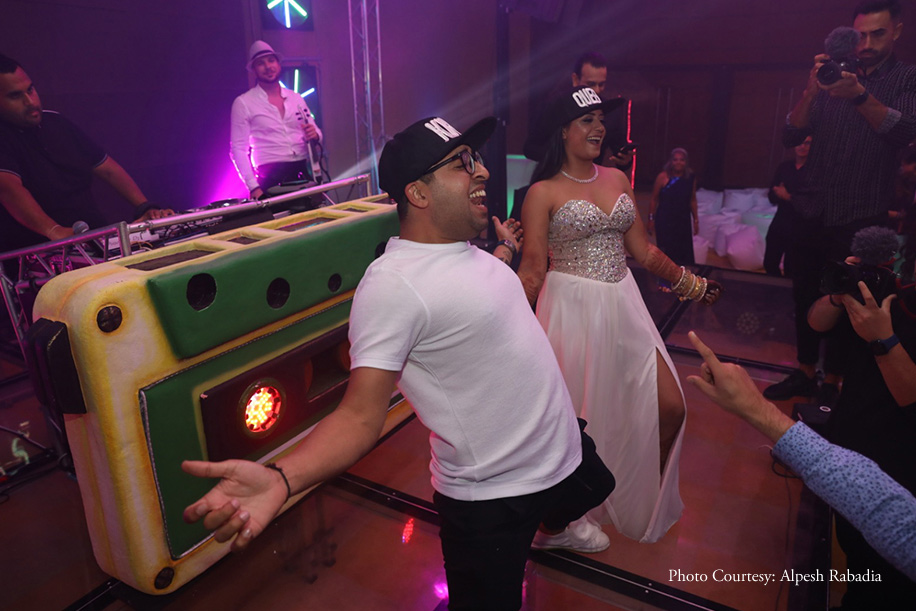 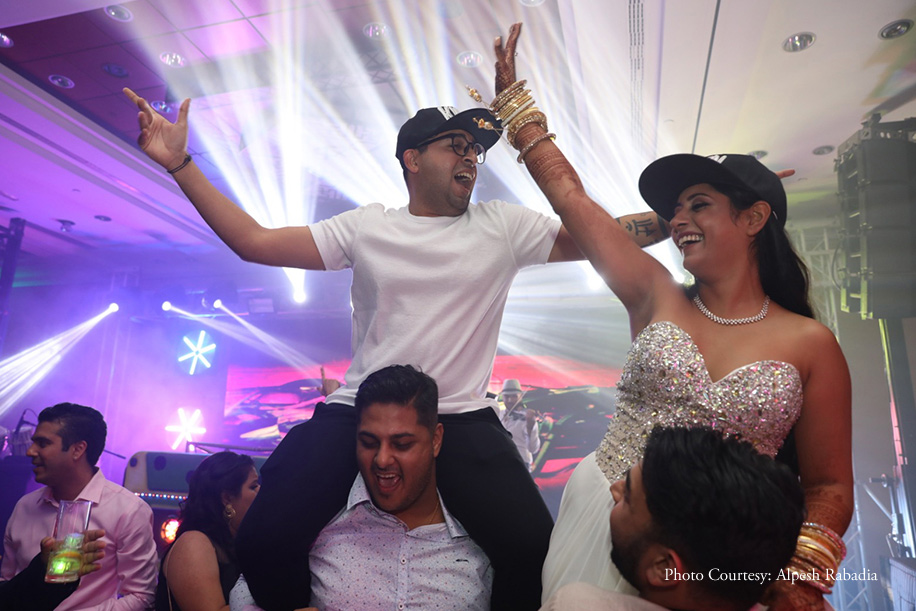 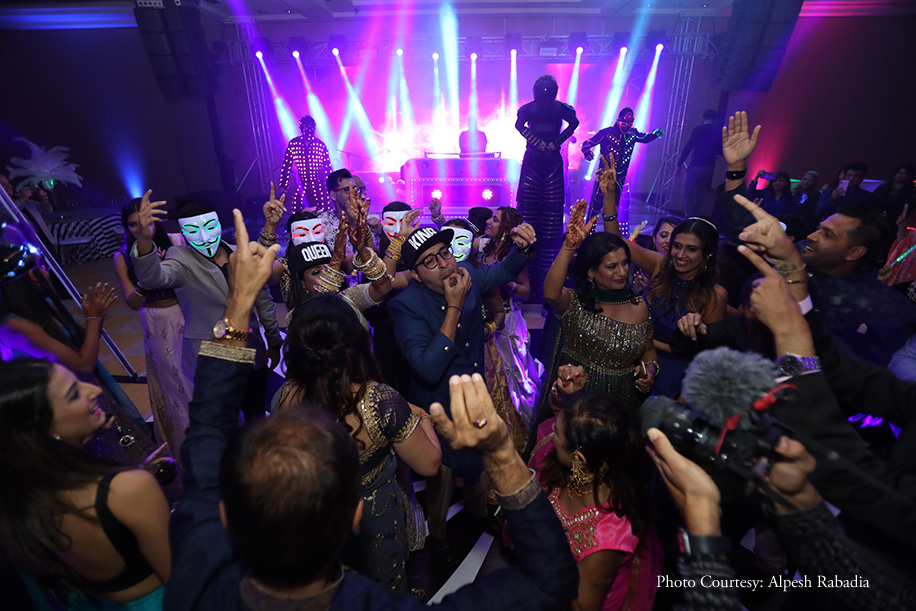 Wedding
“Our big day was held in the afternoon at the resort gardens which offered everyone spectacular views of the ocean. Being the most important day of our lives, we chose to design the mandap ourselves. From personalized floral decor to the texture of the drapes, the mandap was our brainchild and we can proudly say that it was probably the most stunning mandap anyone has ever seen on the island.”, shares the couple.

Sticking to tradition, Sian chose to don a red and gold embroidered lehenga while her groom channeled his inner royal in a white sherwani that he paired with a layered emerald necklace. Reception
“The reception followed a ‘romantic’ theme and the color palette was largely red and black hues. Lined with roses and 500 candles that cast a soft glow over those seated, the presidential table was the highlight of the evening and it seated about 40 people at once. It was an ultra-glamorous evening.”, shares the couple. Advice For Couples
“As wedding planners, we would advise all couples to completely enjoy the process of planning the wedding. While it can get stressful at times, the earlier you start, the better the outcome is. Once everything is organized in advance, every detail will fall seamlessly into place on your big day.”, advise Sian and Tarry.