With signature drinks named after them and a cute cake topper made in their likeness, Soni and Karan's wedding charmed all with its personalized touches.

Karan and Soni’s love story includes a wonderful proposal in the lavender fields of France, followed by a well-planned traditional wedding in different parts of New Delhi. Here, bride Soni shares all the highlights and interesting details. 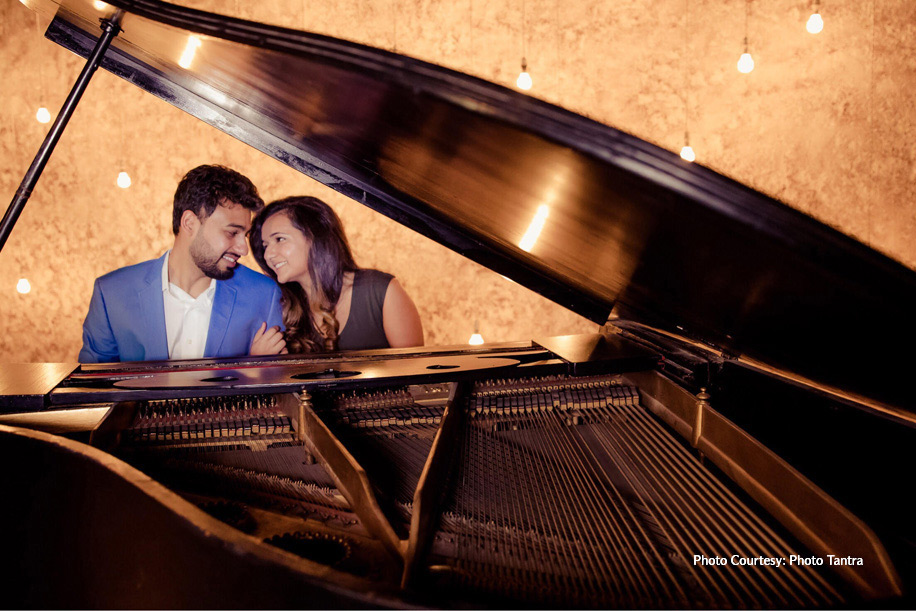 How We Met
“Karan and I met in the junior year of high school. I had just moved to India from New York and ended up in his class. We didn’t become friends until our last year in school when we were both studying for the SAT and started helping each other. We hit it off and started spending more time with each other. We started dating formally in December 2007 after I asked him out. But a few months later, we both moved to different states in the US for higher studies. We flew back and forth to meet each other at every opportunity we got. There were many highs but many more lows, but every time we grew apart we somehow found our way back to each other. Four years later, I got a job in New York, and Karan started his Master’s Degree there as well. We believe this was destiny. We went from high school sweethearts to managing a long-distance relationship, and then finally moving in together.” 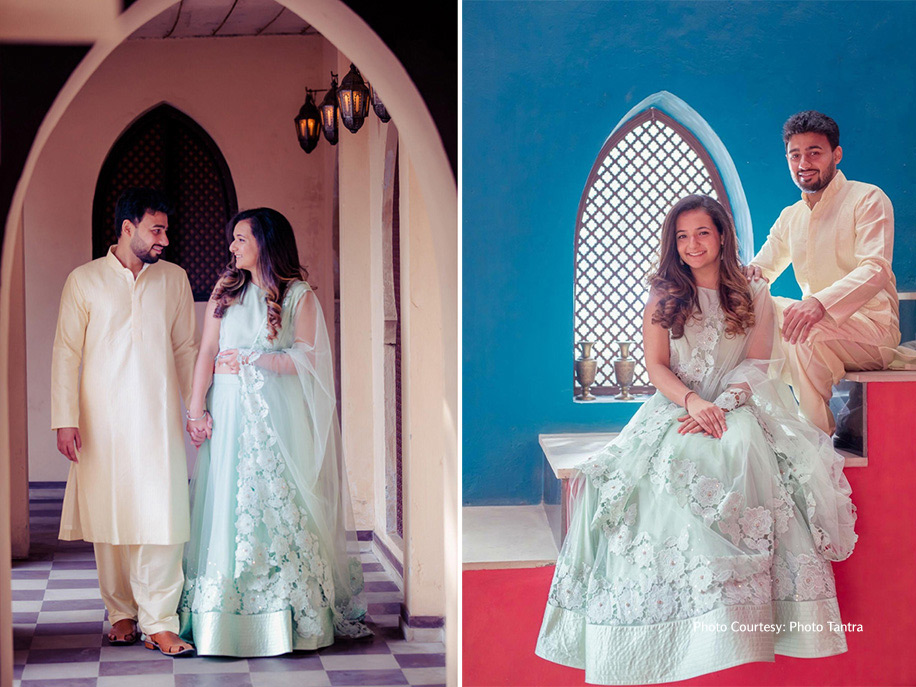 Proposal
“In June 2016, Karan and I traveled to many cities across France as that country had been on top of my vacation wishlist. When we reached Marseille, Karan surprised me with a drive to Aix-en-Provence to explore the countryside. We drove to a gorgeous patch of lavender fields nestled between two hills and endless vineyards. There, in the middle of the flowers, Karan dropped down on one knee and asked me to marry him. After nine years of being with each other, we finally tied the knot in 2017.” Wedding Venue
“Karan and I decided to get married at 5 Ashoka Road in New Delhi. We hosted our sangeet at Tivoli Garden Resort Hotel and all the other functions at The Leela Ambience Gurugram Hotel & Residences. Since we were looking for a large open venue for our pheras, we found 5 Ashoka Road to be perfect.”

Sangeet
“Our sangeet had a ‘Moroccan Night’ theme, so we used colors and elements that would help us achieve an authentic vibe. We used lots of drapes in blue and pink along with Moroccan lanterns and candles. We also had purple lights and floral arrangements that helped set the mood. I wore a bright yellow and blue lehenga from CTC Plaza in Delhi for this function.” 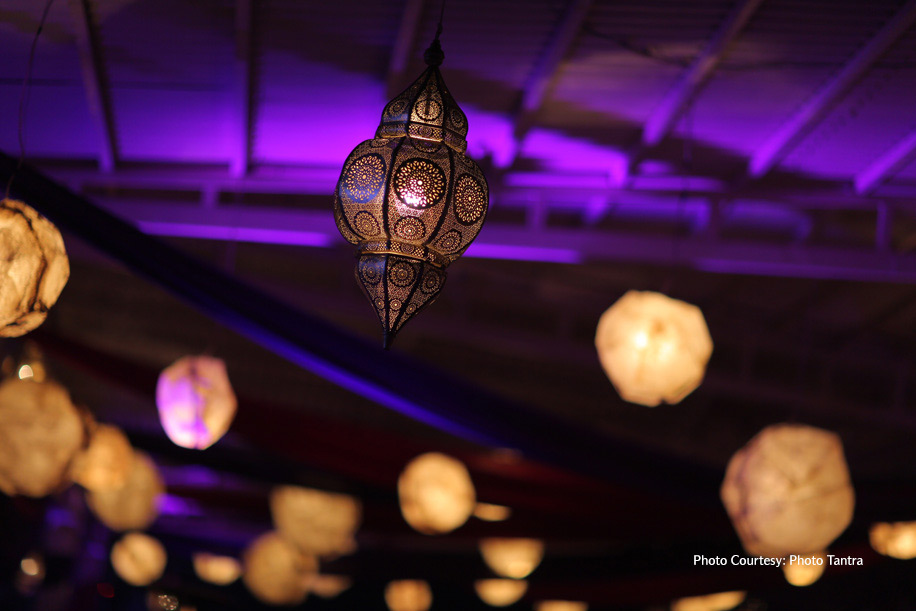 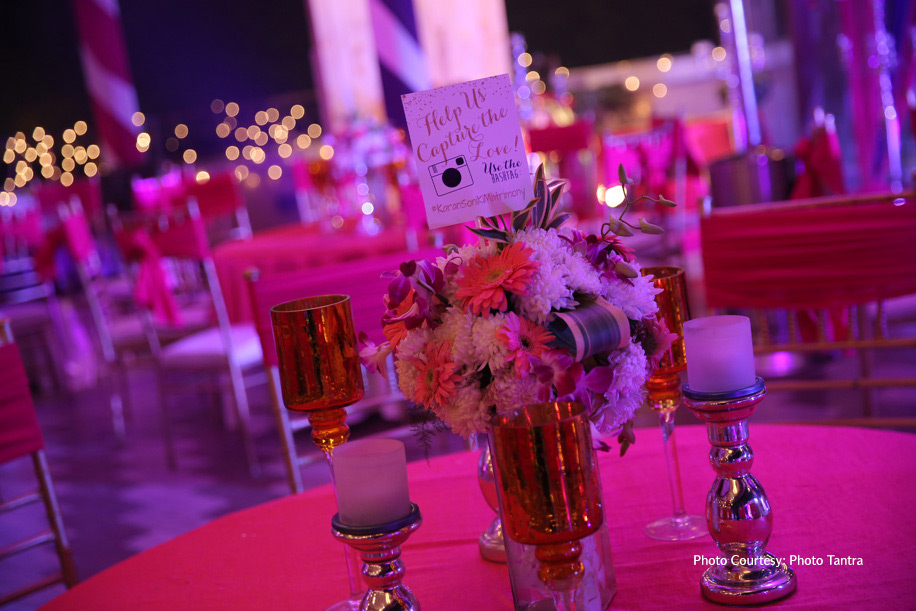 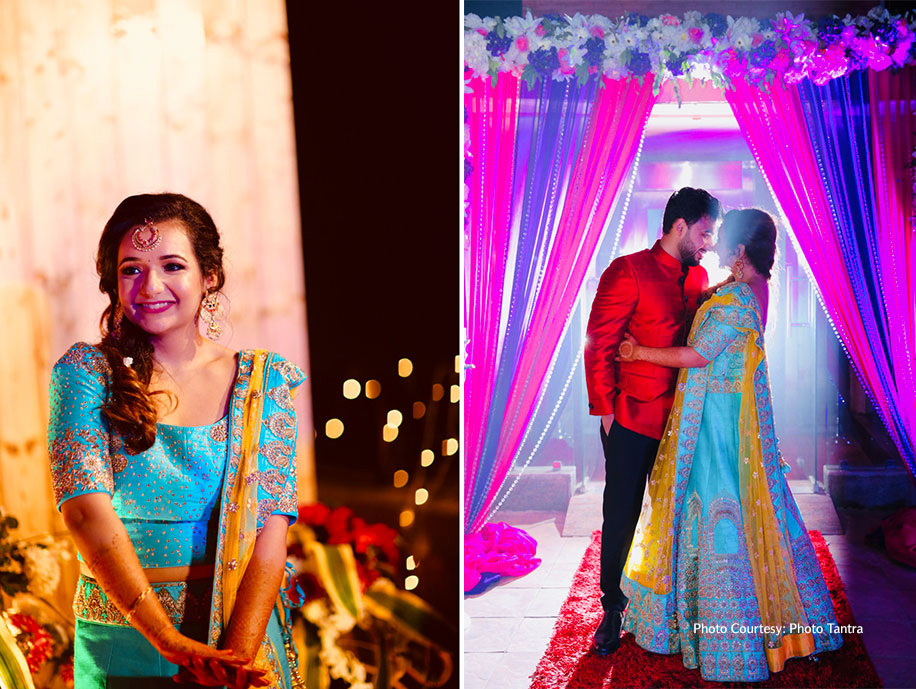 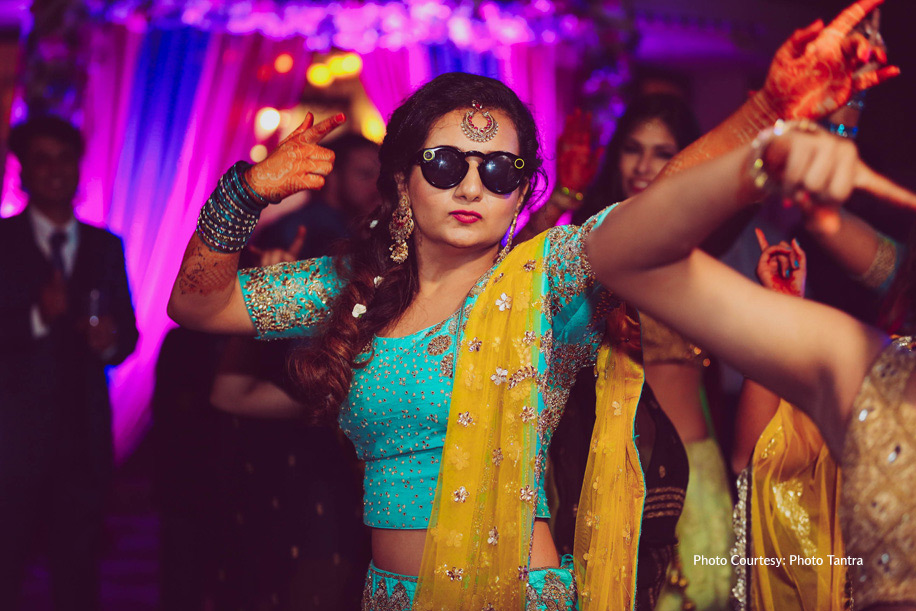 Cocktail Party
“The coolest part of our cocktail party was the signature drinks named after us. Karan’s drink was called ‘Black Karant’ while mine was called ‘Sinister Sonitini.’ We had one more drink called ‘Jab We Met.’ Some great music helped elevate our spirits further, and we handed out glow sticks to our guests so everyone could savor the rocking party experience. The Nicole Bakti gown I wore for this function was purchased in New York. Karan wore a suit from Michael Andrews in New York.” Haldi
“The decor for our ‘haldi’ (turmeric application) involved lots of bright colors. While yellow and orange marigolds and matching drapes were the main part of the setup, we also added quirky umbrellas with ethnic prints to make the environs a little more vibrant.” 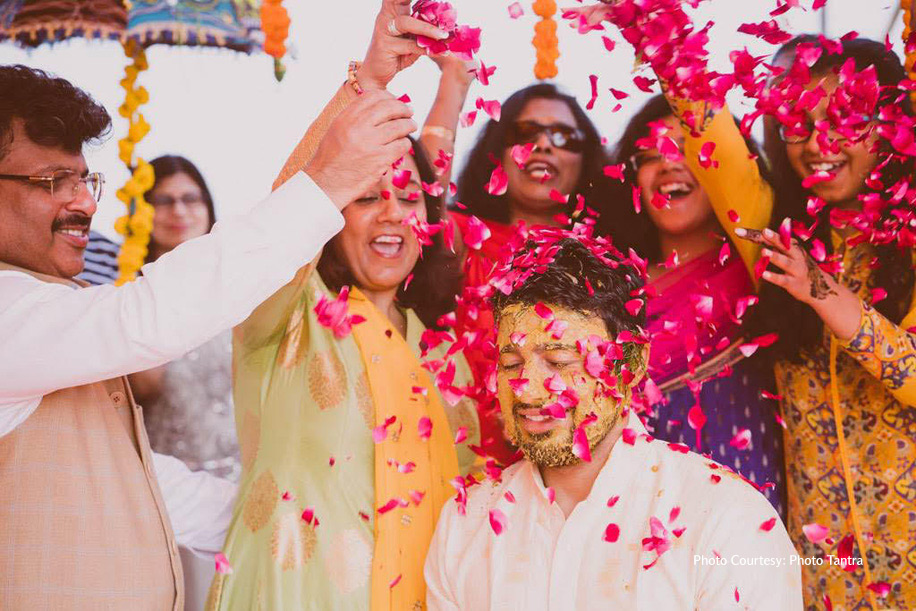 Wedding
“Peach and white were the colors that dominated the decor for our pheras. We had several guests who were not Indians, so we printed out scrolls with the flow of events and the significance of each ritual so that they felt involved. Besides this, we had a guest book that was passed around for everyone to write their wishes for us. We even invited a Sufi rock band called Rocknaama to perform at this function. The team at CTC Plaza custom made my lehenga for my pheras, and Karan donned a white sherwani from Dewan Sahib.” 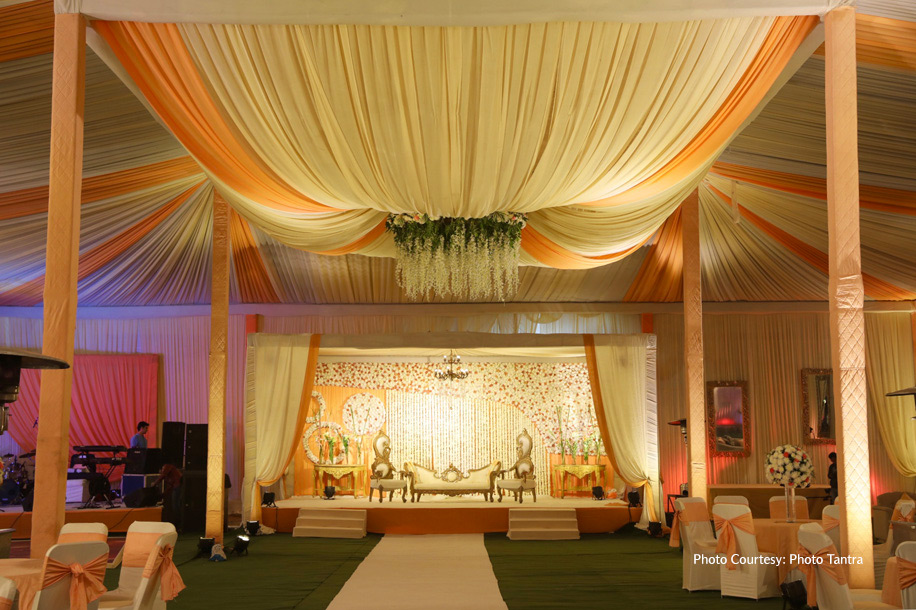 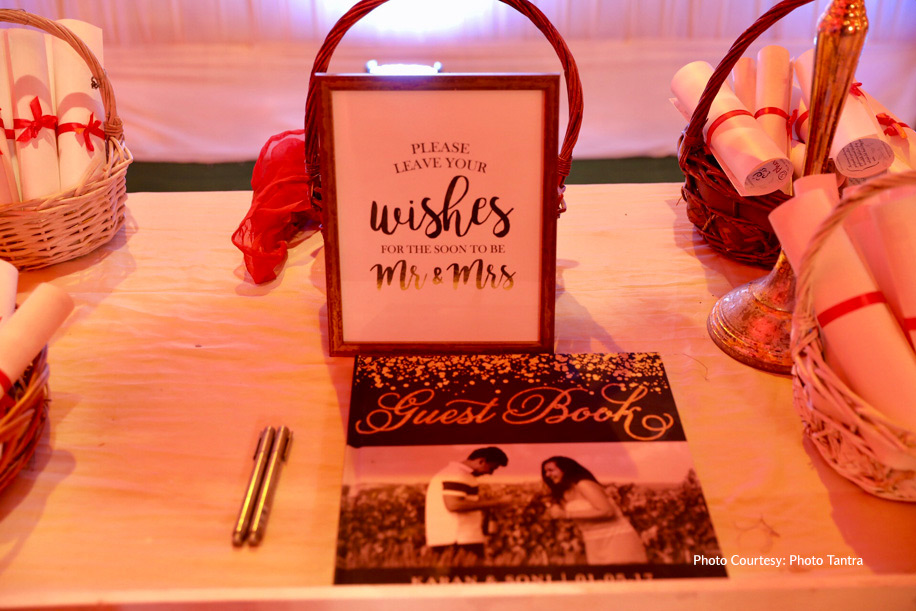 Reception
“Our wedding decor had a sophisticated vintage charm. The entire setup was done in white with a few splatters of greens and violets. The stage was particularly beautiful and attracted a lot of compliments because of the way it was curated and arranged. Our wedding cake was a contemporary creation by Firefly Bakery. I ordered a custom cake topper from Etsy. The miniatures were dressed like me and Karan which made it look more personal. We invited Silver Strings to perform at our reception. I wore a custom-made blue and pink lehenga from Paris Street in New Delhi while Karan wore a black suit from Michael Andrews in New York.” Advice For Couples
“When planning a wedding do not stress out over the little things. It’s your day, and your guests will enjoy if they see that you are enjoying the celebrations.”