Dhiraj and Sonia decided they were soul mates after a 45-minute chat, which led to a 14-month courtship before they wed.

Our series, ‘Featured Weddings’ brings you wonderful moments from weddings held at the finest venues across different cities. Here, bride Sonia tells us all about how she met her soul mate and their wedding celebrations in Mumbai.

How we met
Dhiraj and Sonia didn’t have to look very far to find each other. Beautiful love stories can lurk around the corner, waiting to happen at the right time – and that was the case for this couple too.

Dhiraj and Sonia’s parents had known each other for two-and-a-half decades, but the couple only met last year at Sonia’s cousin’s wedding reception. “We barely spoke to each other then,” recounts Sonia. But it must have been love at first sight for Dhiraj who asked his parents to get in touch with hers soon after the event. He also connected with Sonia on Facebook.

Three weeks later, when the families met officially, Sonia decided Dhiraj was her soulmate and was ready to tie the knot with him. She says it was a quick decision on her part, and one of the easiest she’s ever had to make. “We just laid out all our cards on the table. Dhiraj is a very simple, straightforward, chilled out and an easy to understand guy. A 45-minute conversation was all it took to agree that we would make a good match,” she shares.

A formal roka followed three months later. Dhiraj bowled Sonia over during their 14-month courtship with his generosity, simplicity and humility. She recalls how he took her for a romantic moonlit dinner on the eve ofTeej and waited to have dinner with her after she finished all her rituals. “He really knows how to make every little thing special,” she gushes. Extravagant gifts aside, he went all out on her birthday to create a collage of her childhood pictures. “And he proposed with a card, bouquet and a ‘doctor’ cake,” she adds. Sonia is a doctor by profession, while Dhiraj is in the construction business. Wedding Venue and Functions
Sonia and Dhiraj started planning their April wedding together which brought them a lot closer as a couple. From deciding the venues to booking the decorators and dhol players, these quick decision makers handled everything smoothly.

Mehndi
The first ceremony of their three-day wedding was a floral-themed mehndi at Royal Garden in Kalyan. The venue was decorated vibrantly with orange and yellow marigolds, and lit up with festive lights. Sonia wore a creamy flared swirl gown and a glittery bodice with gold accents, while Dhiraj looked dapper in his dark formal suit. They danced to the beats of the dhol, surrounded by loved ones and friends, and the energy carried over to the next day to the wedding that took place at the Renaissance Mumbai Convention Centre Hotel in Powai. This was followed by the reception on the third day.

The couple chose the Renaissance Hotel because it offered a magnificent view of the beautiful Powai Lake as well as spacious indoor and outdoor venues that could comfortably accommodate their large number of guests.

Sonia liked the fact that the hotel had, very helpfully, offered a list of wedding service providers to ease the planning process. She also invested a lot of time scouting around Mumbai for professionals who would help her look her best on her big day – such as make-up whiz Ojas Rajani and mehndi artist Hansa Gajra. Her choice of bridal jewellery underlined her fondness for diamonds. Dhiraj had, very thoughtfully, adorned her finger with a diamond and white gold engagement ring at their roka ceremony. 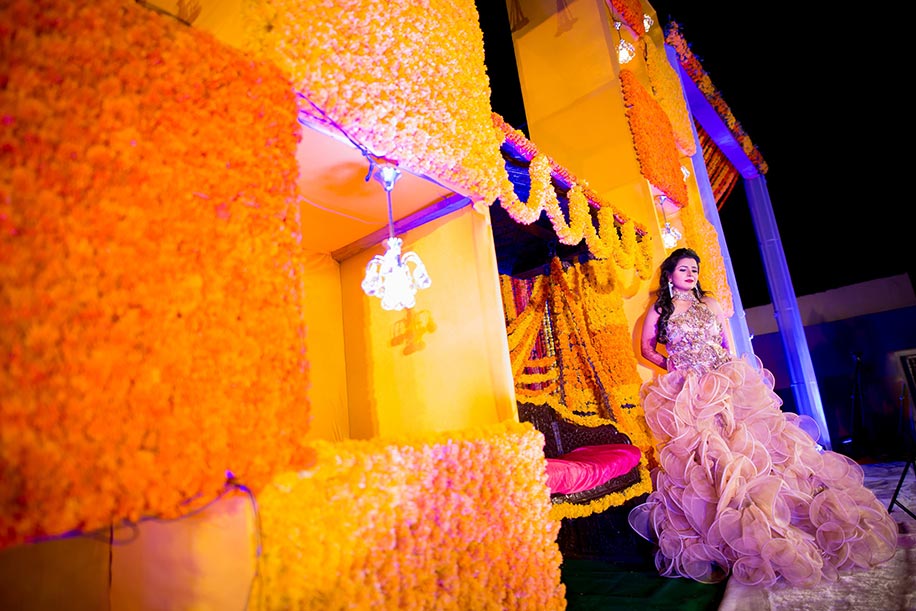 Wedding
For the pheras, the couple chose a rustic ‘bells and kaleerey’ look, and it was held outdoors at the hotel’s terrace garden. A beautiful floral mandap with traditional accents like matkas and garlands was the perfect backdrop for the traditional ceremony against the darkening evening skies.

The action had anyway revved up a couple of hours earlier as a Harley-loving Dhiraj and his ‘baraat’ had zoomed to the wedding together on their macho bikes like an impressive turbaned cavalcade. Dhiraj’s Harley Davidson bike was specially decorated for the event with flowers. Sonia looked resplendent in a richly embroidered red lehenga-choli and chooda set. Her arms were adorned with beautifully intricate mehndi patterns that extended beyond her elbows. Dhiraj cut a dashing figure in his rich creamy sherwani with golden accents. 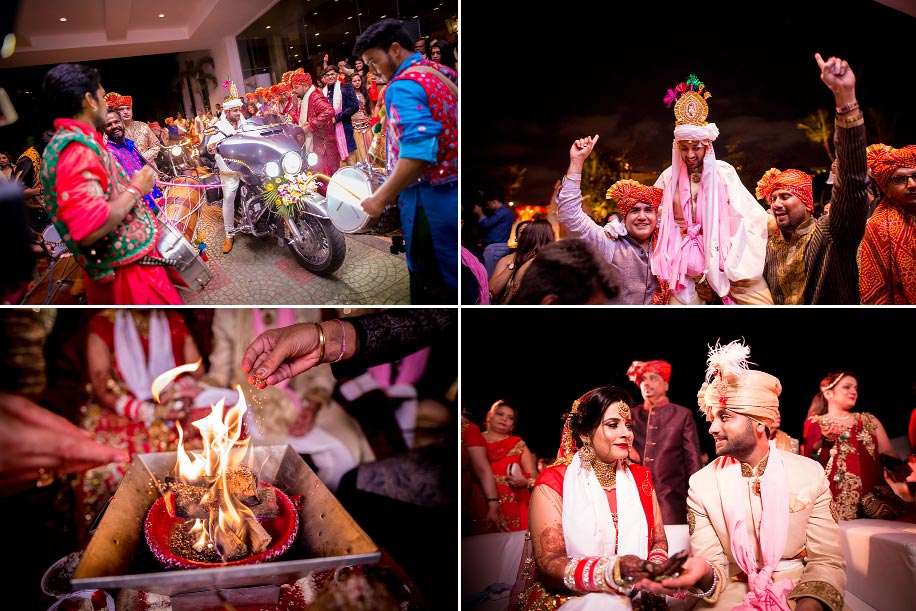 Reception
The wedding reception, with the theme of a ‘Royal Palace’ was held at the hotel’s Ballroom that was decorated with floral bouquets. The pièce de résistance at the event was a stunning upside-down chandelier cake created by home baker Sangam. Decorated with pretty flowers on top of the ‘base’ the cake elicited a lot of admiration from all the guests. Dhiraj donned a formal tuxedo for the reception while Sonia was a picture of perfection in her red ruffled gown with pretty swirls and floral accents.

This wedding was the natural culmination of a love story that had started when Dhiraj first saw Sonia. And we wish the couple more adventures in their marriage that include bikes, beaming loved ones and blissful moments. 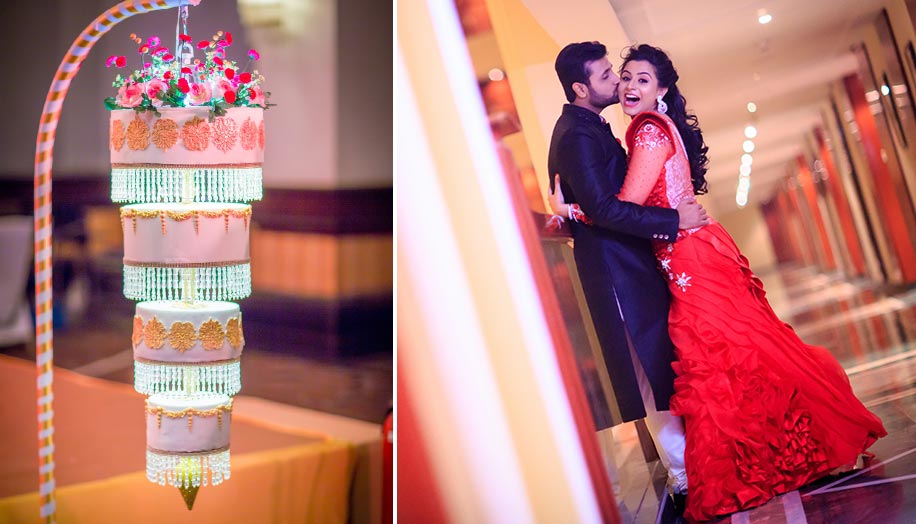 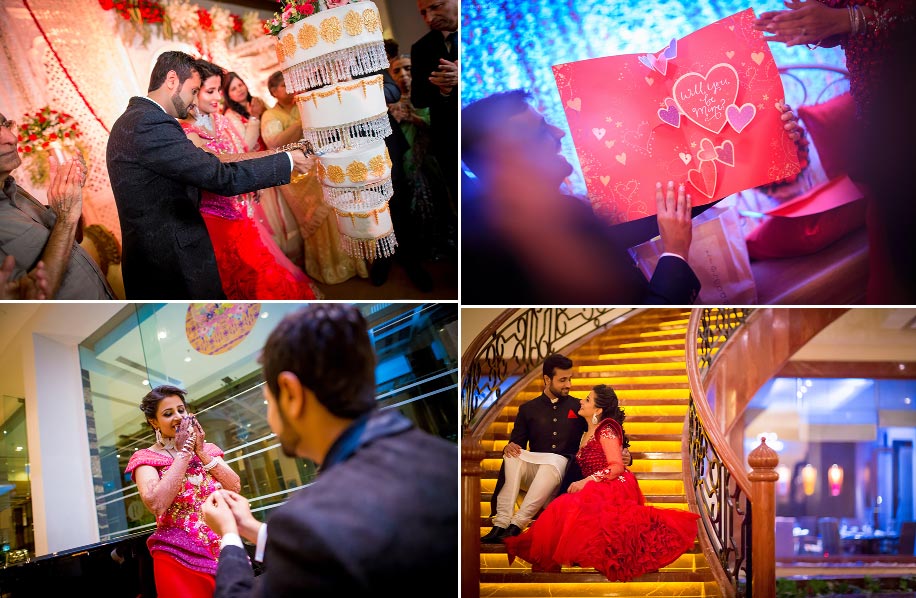 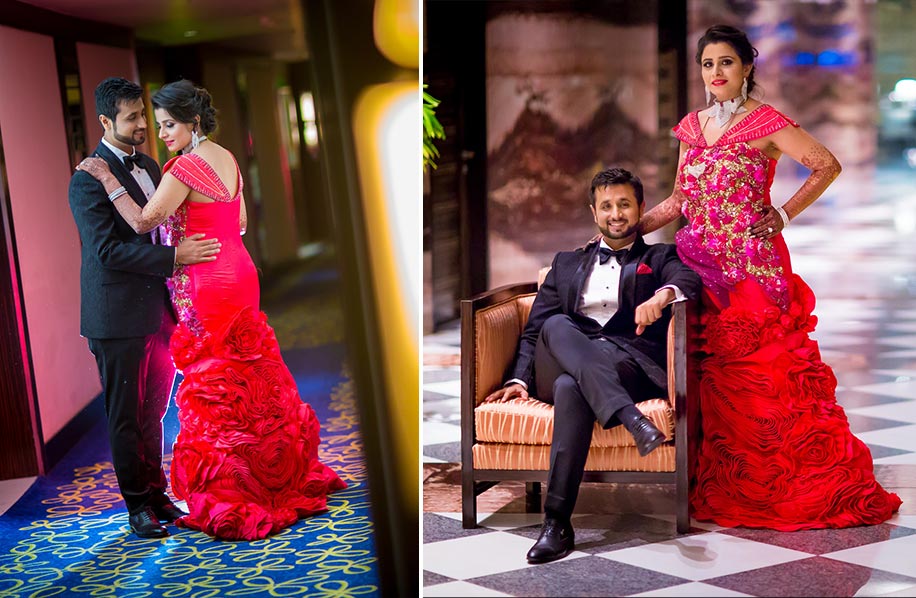