Vinita and Shivam's wedding celebrations were held at interesting venues in Mumbai that included a traditionally decorated Punjabi restaurant and a cool, edgy club.

Vinita and Shivam met through a common acquaintance and became best friends within a week. Bride Vinita tells us about her ‘filmy’ love story and shares highlights of their wedding which were beautifully captured by WeddingSutra Favorite – Dreamcatchers Photography. 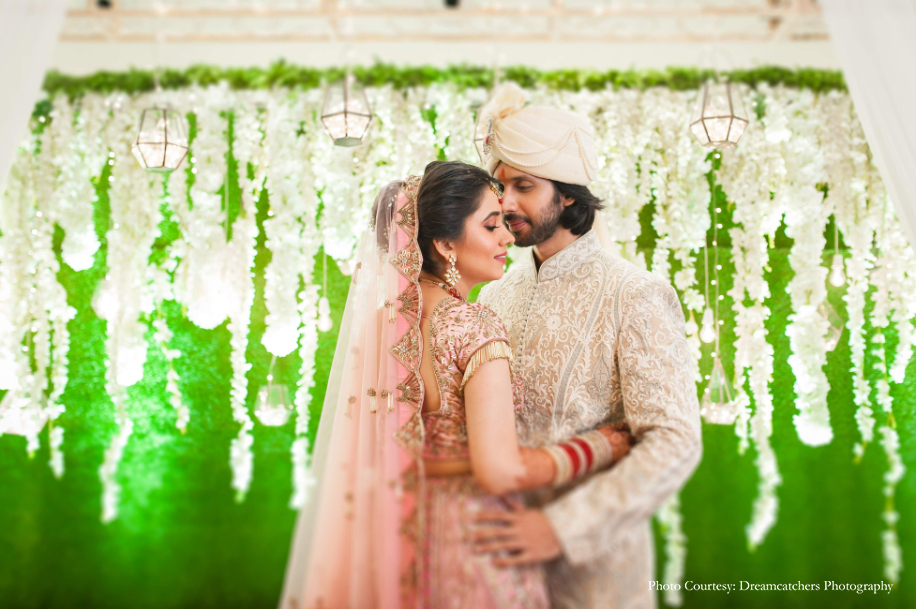 How We Met
“Shivam is a businessman and owns a petrol pump and restaurants, while I work in Public Relations as the Director of Brand Relations. Well, our story is a bit filmy just like how I always wanted. We met in 2012 through a common friend and became best of friends within a week. We spoke to each other five times a day and would meet almost daily. This went on for three months, and then Shivam disappeared. He was going through some drama in his life and chose to keep me out. He stayed out of my life till 2013. I decided that when I entered 2014, I would never think of him even though I had a soft corner for him. But life had other plans. I got into Buddhist chanting that year, and within three months, I heard from Shivam who wanted to be friends again. Our friendship remained the same, but I started falling for him, even more, this time. He was a total gentleman – so chivalrous, caring, funny and good looking. It was hard not to fall for him! There was also a very funny story that Shivam told me when we started dating. It’s when we met for the first time – it apparently was back in college when we were briefly introduced to each other by that common friend. It had been raining that day and Shivam took the trouble of dropping me back home. Once we reached my place, I just walked out without even acknowledging or thanking him. He went back home and told his brother that he had met a really hot girl who had ignored him. He promised his brother that one day, that girl was going to fall for him. And there it was – I guess our story was already written!”

Proposal
“Shivam is not a romantic kind of a person. When we first started dating, we knew we wanted to marry each other within six months into our relationship, so there wasn’t a proposal as such. However, before our ‘roka,’ Shivam took me on a date to the yacht restaurant next to the Sea Link and proposed to me by going down on his knees and presenting me with a beautiful ring. That day was one of the most memorable days of our lives.”

Wedding Venue
“We chose to get married at the NSCI Palace Halls in Worli. We booked both the ballrooms as ours was a Punjabi- Sindhi wedding, so we needed a spacious venue to accommodate all our guests. My dad is a big foodie and he wanted a big menu for the wedding, so the venue proved to be perfect for us.”

Mehndi
The bride’s mehndi took place at ‘Taste of Punjab’ in Mumbai. Vinita shares, “Well, I was marrying a Punjabi so the venue had to be completely traditional and something that went perfectly with the function. The venue we chose – Taste of Punjab – is done up so well that we didn’t have to really do it up at all. The whole vibe was colorful with kaliras hanging from the ceiling to Punjabi music playing in the background. It was a perfect setting.” The bride looked resplendent in a dark maroon one-shoulder blouse with an attached dupatta and a waterfall skirt with minimal embroidery. Shivam provided an appealing contrast in his all-white knee-length kurta, chikankari jacket and straight pants which he paired with brownish burgundy shoes from Shutiq.” 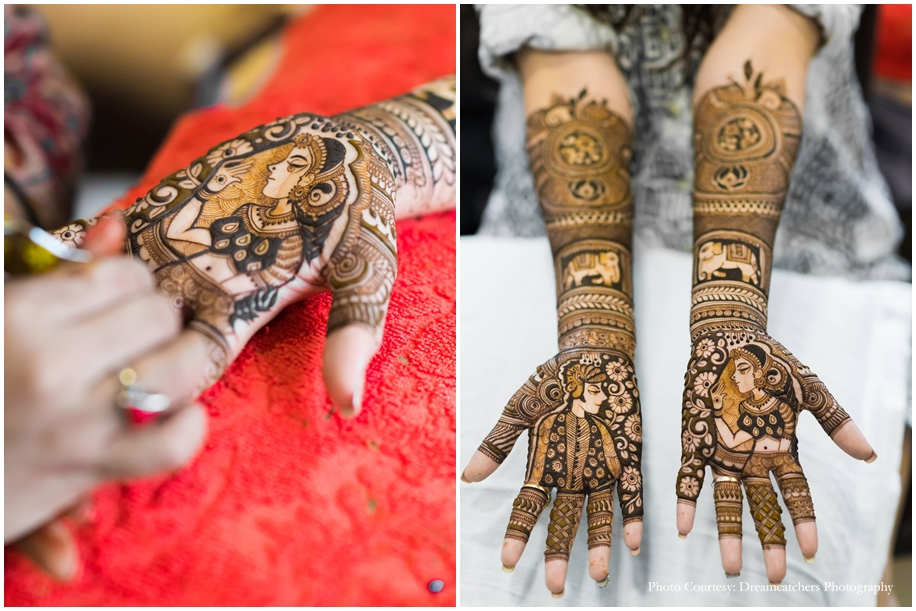 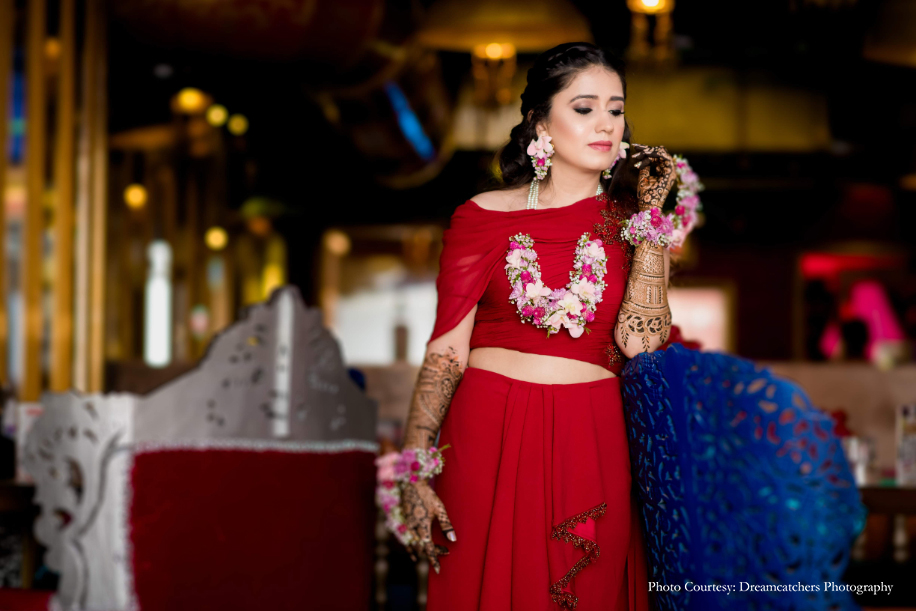 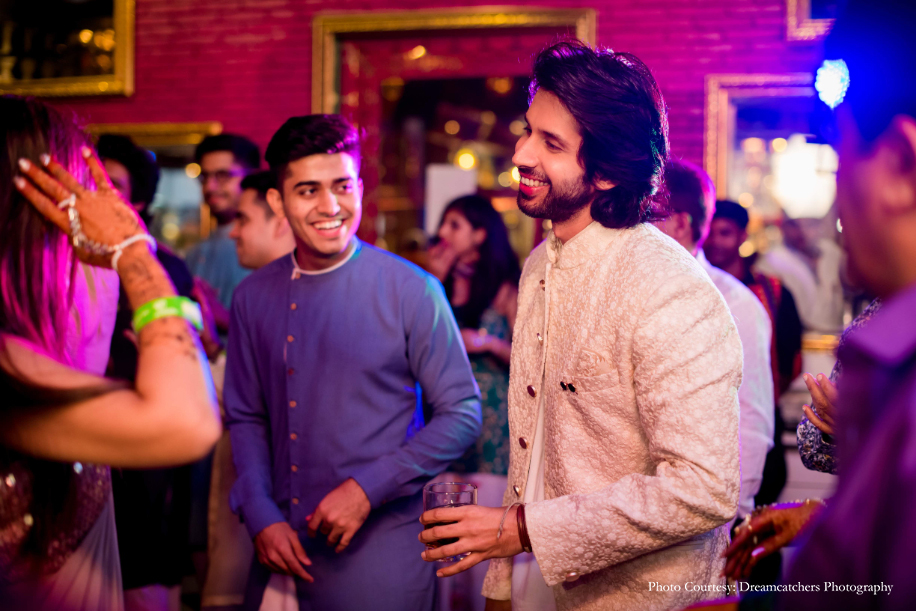 Cocktail Sangeet
“We wanted all our functions to have a different feel, so we went with a very dreamy, very ‘Moulin Rouge’ sort of vibe for this event which was held at the Playboy Club in Worli. The place was fabulously done up in black and gold. We had a small stage set up for performances and a red carpet so that everyone felt special when they walked in. Our outfits for this cocktail event had to be gold. But instead of going the typical gold shimmer way, we decided on a nude color base. My aunt worked wonders by incorporating Swarovski crystals through my entire outfit. My jewellery we kept minimal as the outfit almost weighed 20 kg. I wore a chain bracelet, cocktail earrings, ring and a two-line necklace.” Shivam wore a tuxedo. He shares, “I wore a black colored tuxedo paired with a white shirt. I wanted a very clean look for this function. And since it was a full party event, I wanted to wear something in colors and cuts I would be comfortable in.” 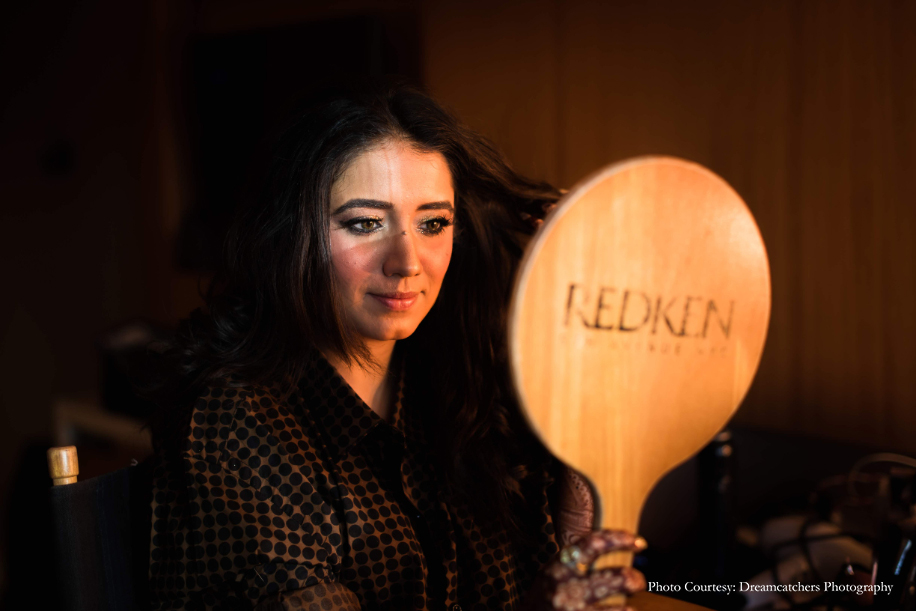 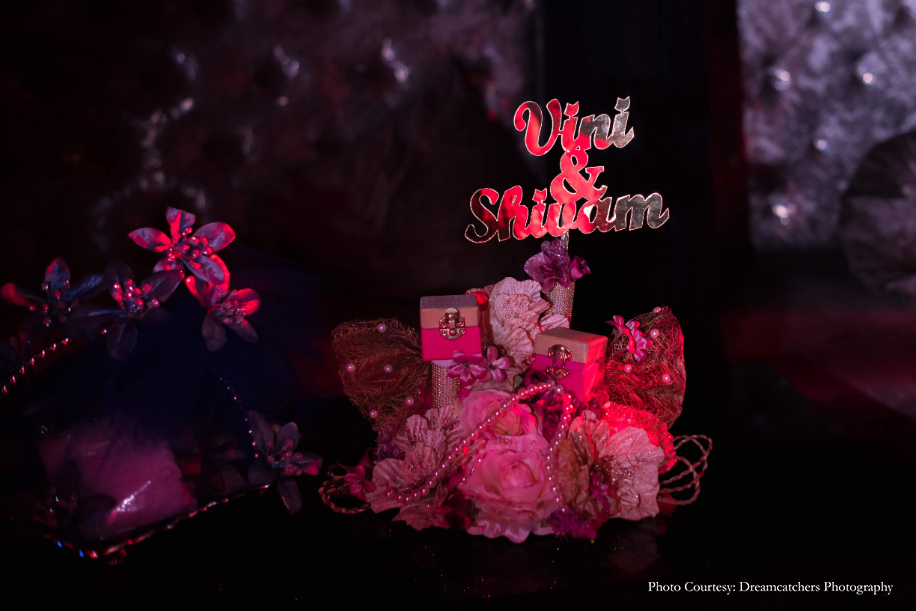 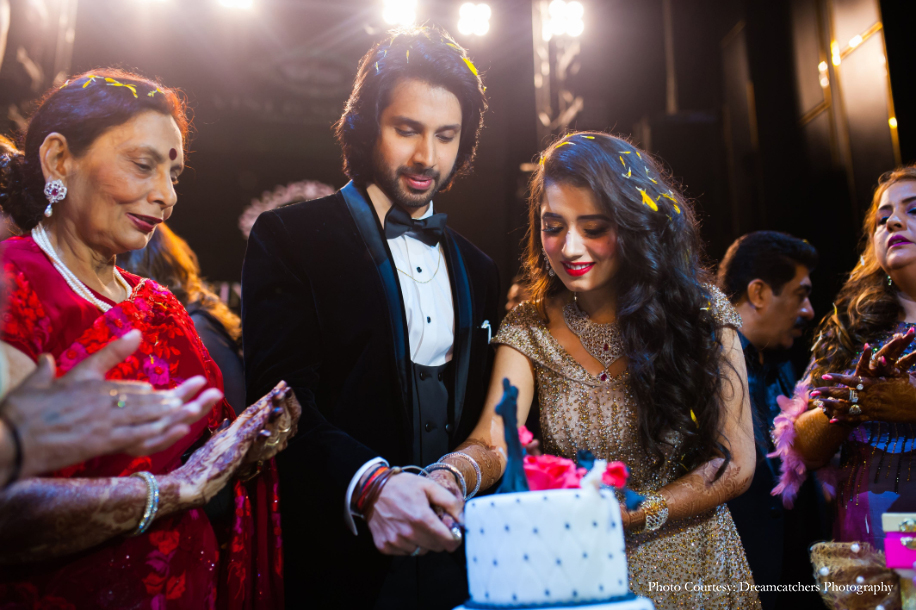 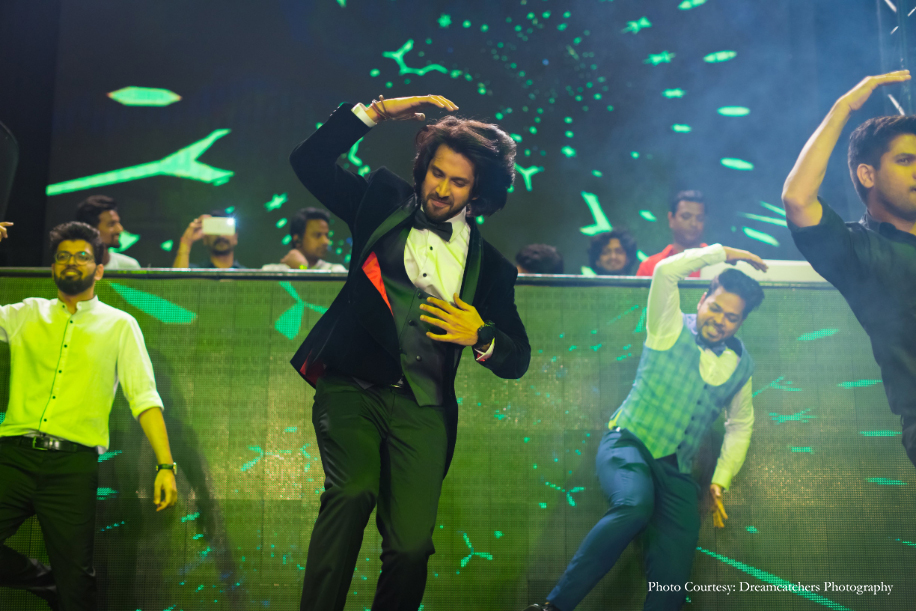 Wedding
“The decor at our wedding was done by Simonelle Mistry. We wanted something minimal yet edgy and classy. We chose nice pastel shades even though the wedding was primarily a late-night phera ritual. We chose a white mandap with vintage chairs and pink and white floral touches. In the lobby area we had a cute little prop for the ‘Meet and Greet’ when the baarat arrived. The function started with a cocktail event with dance, drinks, and food followed by the pheras ritual at 2 am. My sister was keen I wear a pastel lehenga, but I was doubtful as it was a night function. But when we tried on different colors, we knew that onion pink was my shade. I wanted a very contemporary yet traditional outfit for my special day. So my aunt used gotta patti, tassels, Swarovski crystals as well as dull gold embroidery to amp up the outfit. I wore kundan jewellery to complete the look. My makeup artist worked wonders by giving me a simple look alongside nice gold eyes. She styled my hair into a bun which she accentuated with baby’s breath. Shivam looked handsome in his beige sherwani which had hints of gold and pink embroidery. We paired the sherwani with a matching Patiala salwar and shoes from Shutiq.” Advice for Couples
“There’s only one advice – plan the wedding together. You might have event planners on board, but nothing is more fun than having to look into every detail yourself. Trust me, when you look back at the images – you know you both had your dream wedding.”