On December 7, 2015, four days after they first met face-to-face, Nishi, a PR professional from Mumbai, married Dipanjan, a Briton of Indian origin living in Denmark.

“I always dreamt of getting married to a sweet, handsome guy,” Nishi says, “and I was looking. I wasn’t keen on an arranged marriage and when I didn’t find anyone in real life, I registered on a few matrimonial sites. I’d met and spoken with a few guys and was really on the verge of giving up hope of finding anyone online when one day, Dipanjan Deb, this cute guy from Denmark sent me a request on BharatMatrimony.com.”

Nishi admits she’s super selective about everything yet there was something about Dipanjan, “I decided to get married to him after just one night of chatting with him on Whatsapp. He arrived on the 2nd of December 2015, and we didn’t actually meet until the day of our engagement on December 3, tied the knot four days later.” 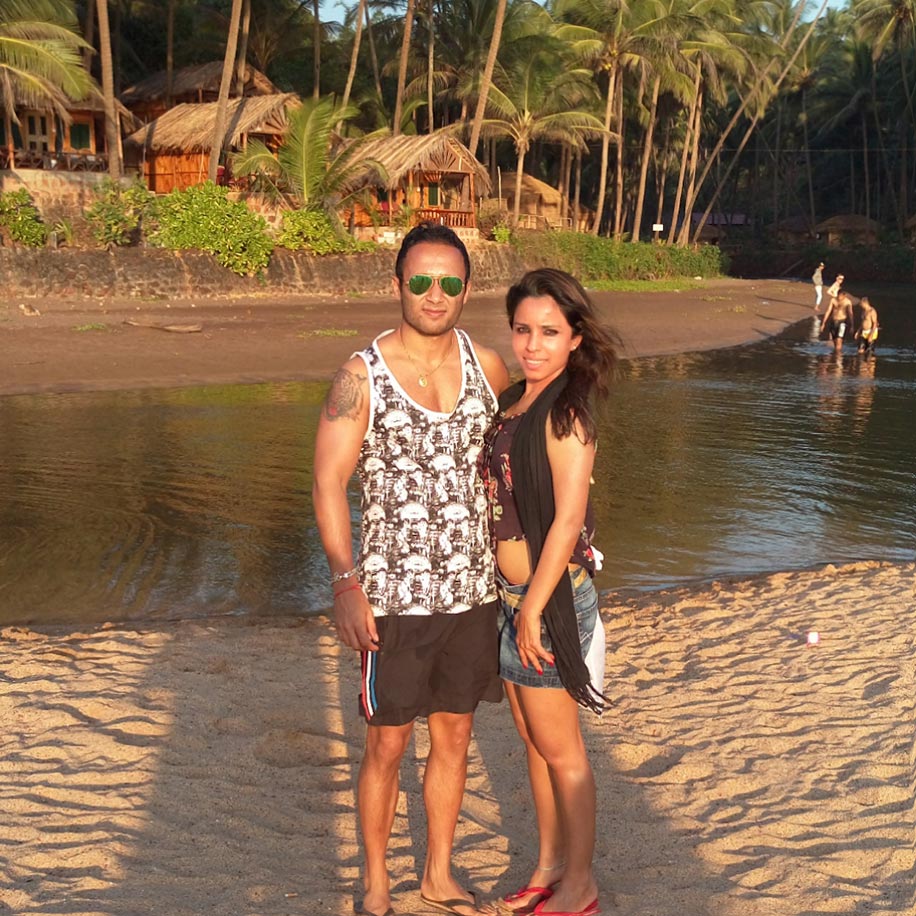 Honeymoon Planning
We decided on Uttarakhand because neither of us has been there. Also Dip that’s my nickname for him – said he loved tigers though he was pretty scared during an elephant safari! We also went to Agra. Like so many other NRIs and foreigners, Dip wanted to see the Taj Mahal. Then we went to Mathura because I wanted to show him life in small-town India and also seek the blessings of the deity there as we started our new life.
He had this preconceived notion that big cities in India are dirty and polluted with no real roads. So I took him to New Delhi to show him the megapolis! The city is beautiful with its old monuments, and we enjoyed the awesome ‘Dilli ki sardi’ and the best street-chaats. After a busy trip in north India, we went down to Goa to relax. We travelled around South Goa and Dip was amazed to see Goa. He thought it was cool, very unusual for India and related it to Europe.

Honeymoon Highlights
We stayed at the Hotel Chevron Fairhavens in Nainital, at Woodsvilla Resort in Ranikhet and at The Den, Corbett inside the Jim Corbett National Park. In Mussourie, we opted for Hotel Vishnu Palace, and in New Delhi, Sisley The Boutique Hotel in Karol Bagh. In South Goa, we treated ourselves to the Alila Diwa and also spent some time living in a shack on Palolem Beach.

We ticked all the usual sightseeing hotspots in these places, such as the ‘Naini Lake’, and other famous tourist spots in Nainital, Kempty Falls and the local markets in Mussourie, the golf course in Ranikhet, the tiger safari at Corbett, the Taj Mahal of course and the bazaars in Agra, apart from Vrindavan, Krishna Janambhoomi and the ghats in Mathura.
In New Delhi, we made sure we spent time at Connaught Place and India Gate, and ate delicious food at Kaake da Hotel.
In Goa, we travelled across the northern beaches of Anjuna, Candolim, Arambol, Vagator and Morjim and in the South, Palolem and Cola Beach, among others. 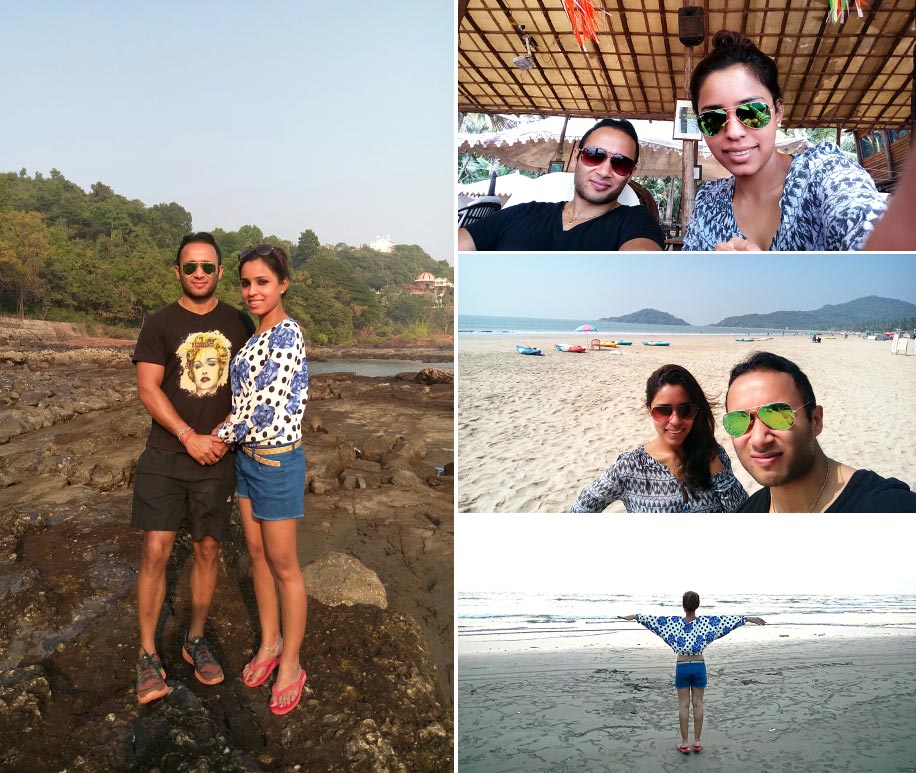 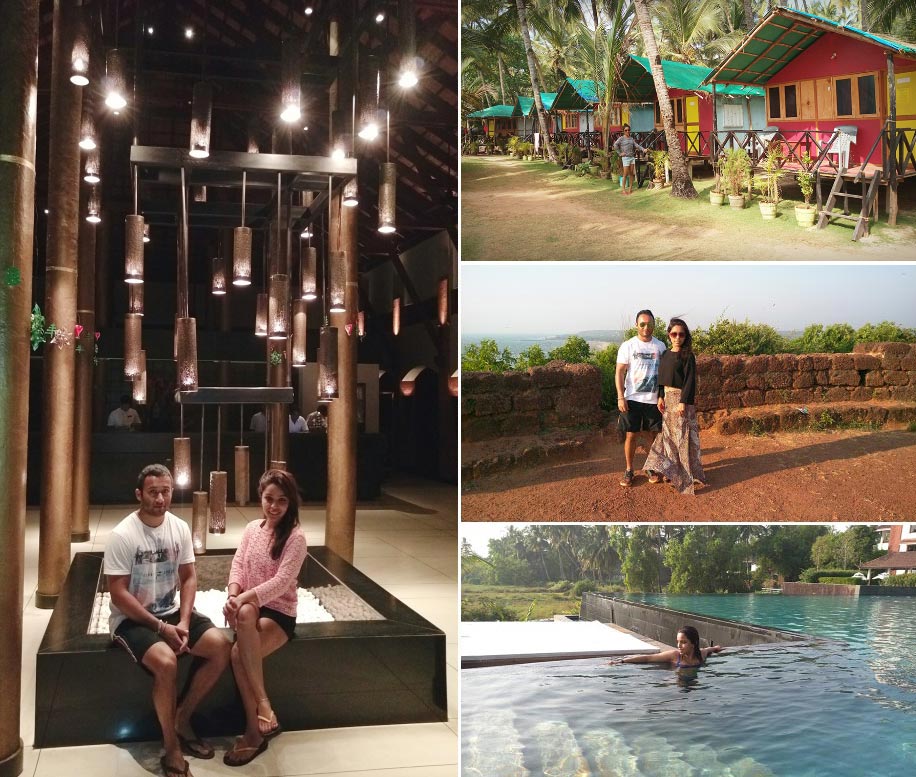 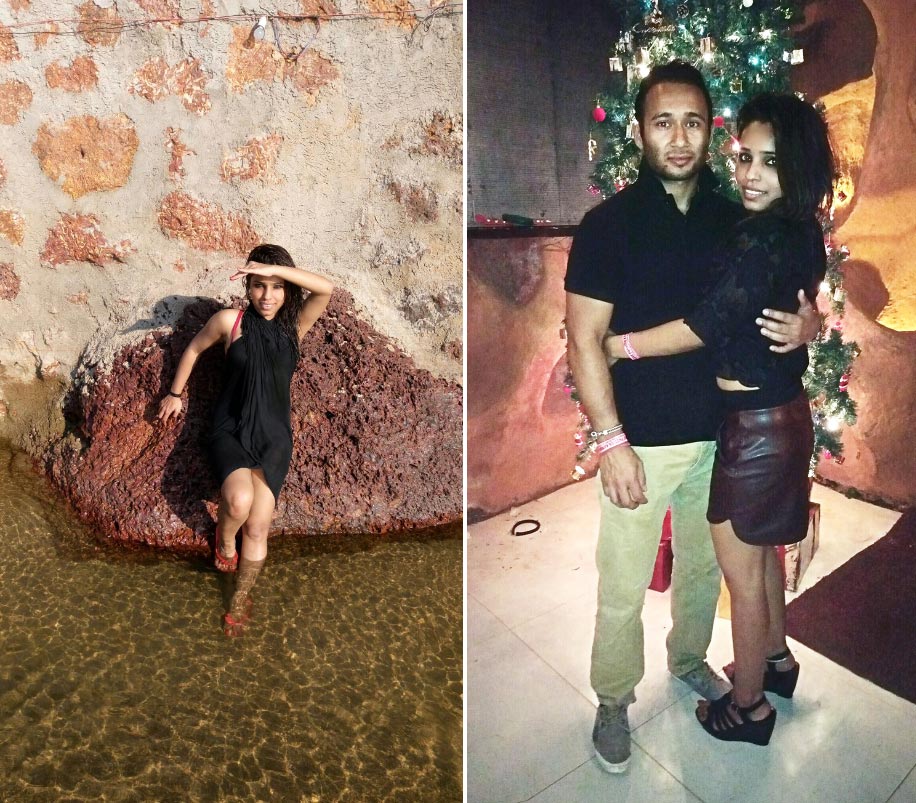 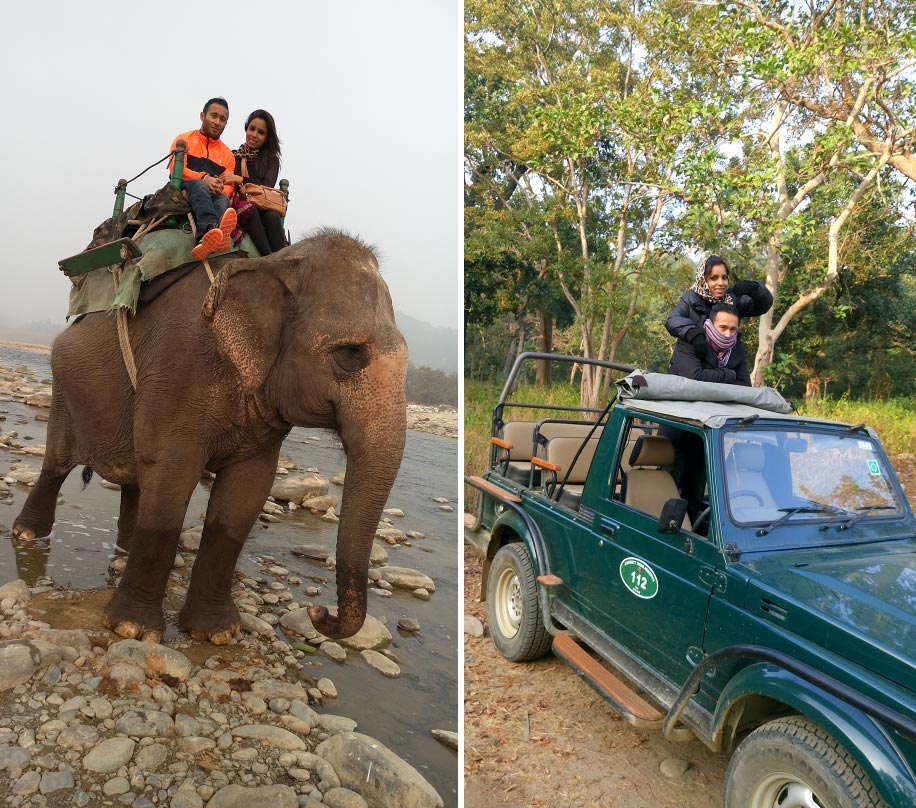 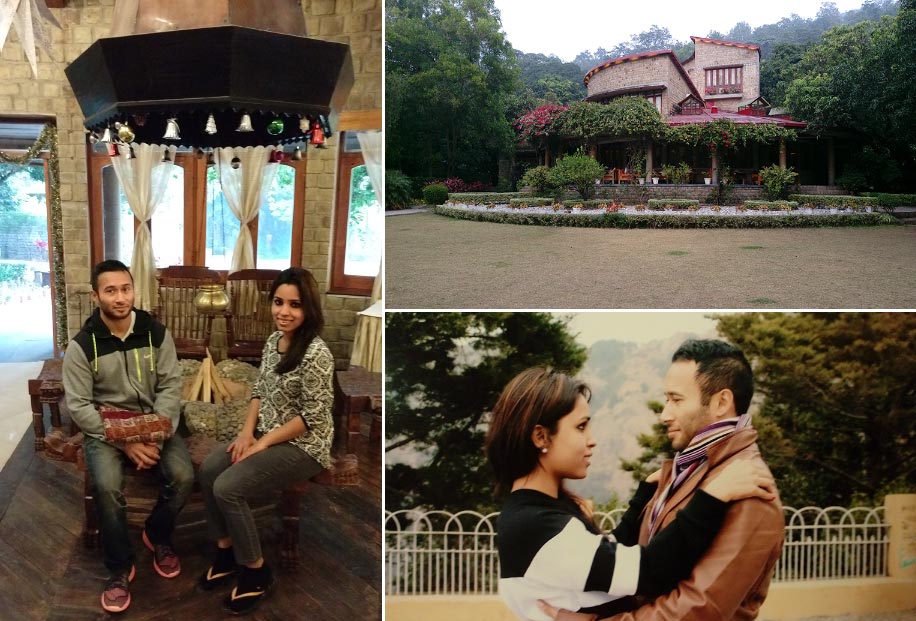 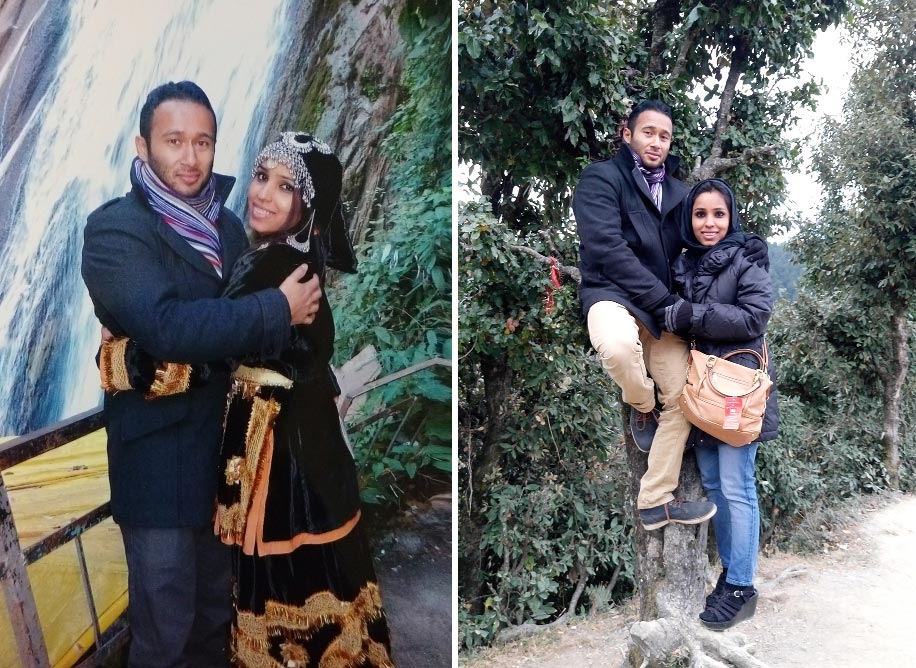 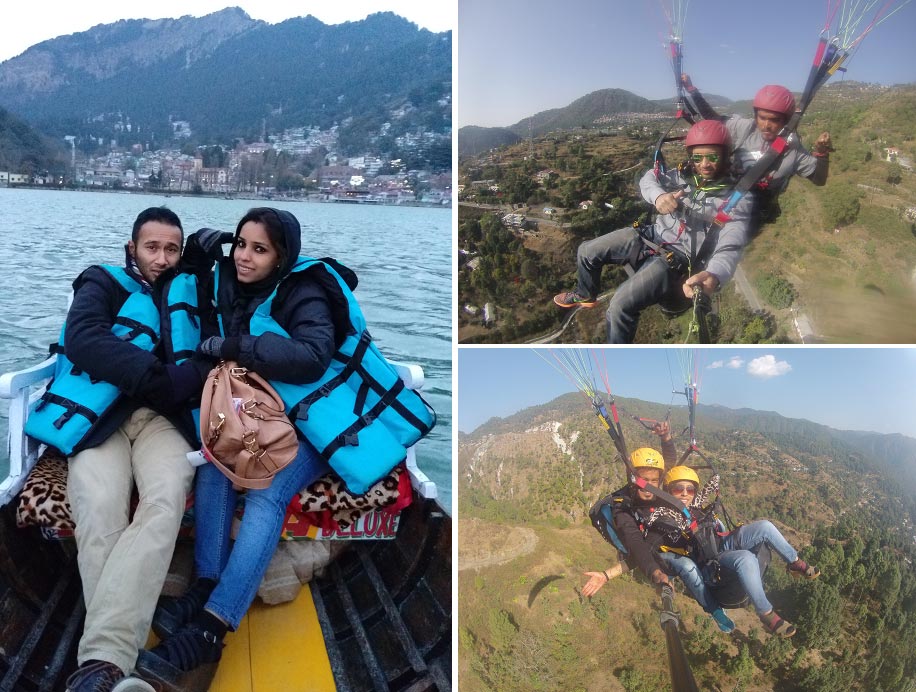 Best Meal
I think our best meal was at Hotel Chevron Fairhavens in Nainital. It comprised Indian cuisine but the staff served the meal in a delightful way, beginning with soups and starters, serving each course separately and ending with delicious Indian desserts. The hotel staff and the ambience were amazing! 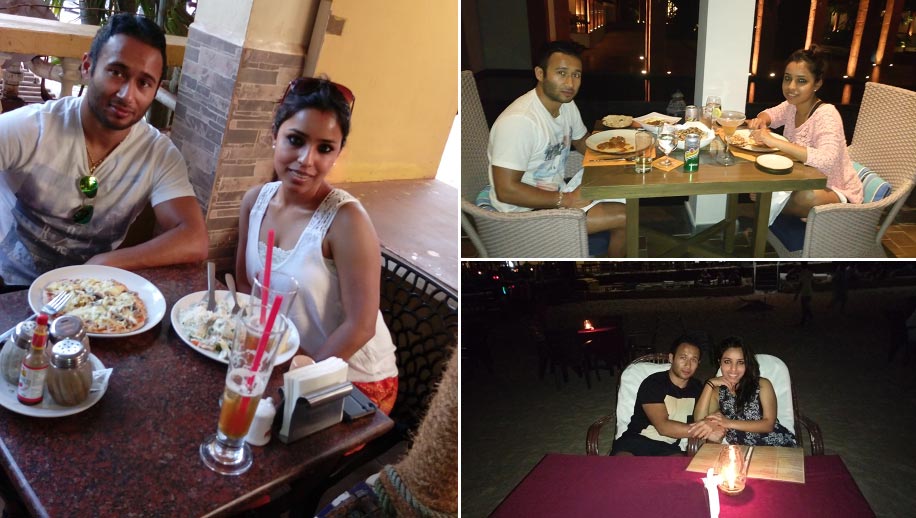 Most Romantic moment
We were at the golf course in Ranikhet and I was jumping and dancing all over the place. I think Dip found it cute I think because he suddenly held me in his arms and said, “I love you.” It was so romantic, and the memory still gives me goosebumps!

Advice for couples
We spent a lot of time travelling, especially in Uttarakhand. I’d suggest not creating a very packed itinerary with too many places. Instead spend time in one of the old British-built hotels and relax. Also, the mountains can exhaust you and if you’re prone to mountain sickness (as we found out we were) it can make things difficult. Do a little research about every destination and prepare accordingly.

Must Experience
Staying overnight in a government guesthouse in Jim Corbett Park is the best way to experience real jungle life. You actually hear the sounds of wild animals as you sleep in your cottage!

Can avoid
Mussorie, if you are exploring Uttarakhand. It’s quite far and there’s not much to do there.

Must avoid
We thought the early morning jeep safari was quite boring. We didn’t see any tigers and apparently you have to be really, really lucky to spot one! Also, beware of the restaurants in Agra. We had a terrible chicken biryani in one of the overrated places and the service was awful too.