Aakrti Morarka, a PR and brand consultant from Bangalore took about a month to decide before she said a “yes” to her prince charming Mayank Jhunjhunwala from Kolkata. This arranged bond was sealed through a big fat traditional Marwari wedding on July 6th, 2011 at the Taj Bengal in Kolkata. 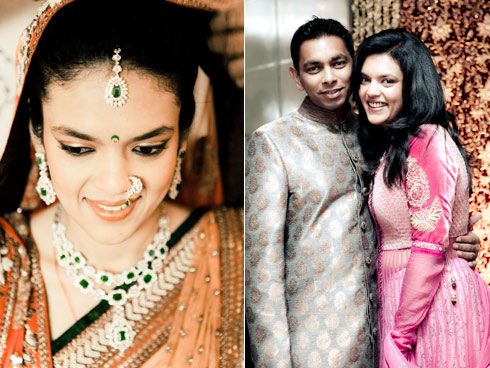 For her Cocktail night which was filled with lots of music, drinks and dancing, Aakrti chose a lime green Anamika Khanna saree with a bright pink blouse. It was a fun night where the brothers of the bride carried her into the function as a gesture of giving away their sister to the groom. 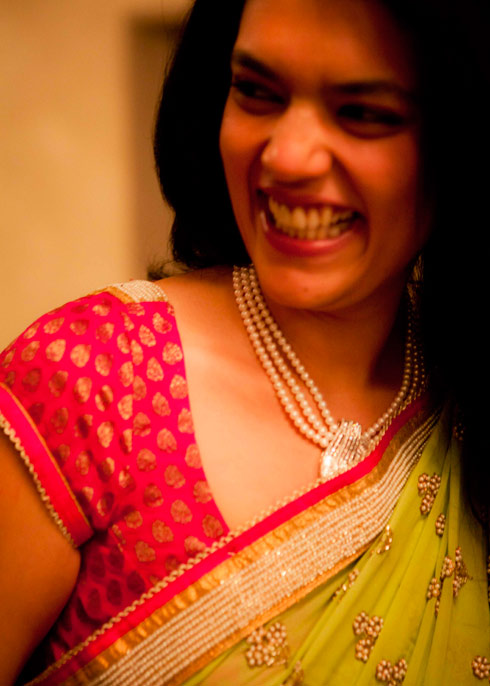 Aakrti wore a light pink sharara specially designed by her mother-in-law Sujata Jhunjhunwala for her Music night. The silver embellishments and the trendy long sleeved top made the bride to be glow as she was in her trendiest avtaar on this day. 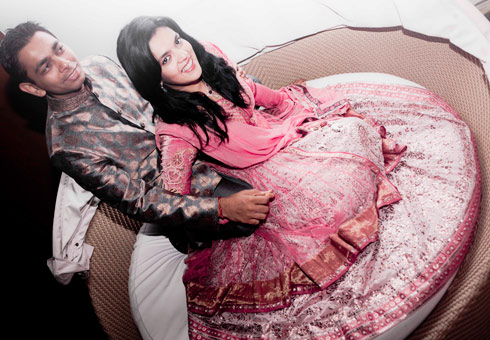 Something that was very close to this modish brides heart was her Sangeet outfit where she draped herself in her mother’s wedding lehenga adorned with simple diamond jewellery given to her by her in laws. She says: “It was a very emotional decision and by far the most stunning outfit of my wedding. I had the blouse restored. It was a stunning electric pink one teamed with a deep purple choli and had real silver gota work on it. What made it more special was the fact that the bootis on the lehenga were my mother’s grandmothers who had hand embroidered the lehenga for my mother herself. So it was a very valuable heirloom which carried forward the sentiments attached as well. My mom cried when I first told her that I want to wear her lehenga for my wedding.” 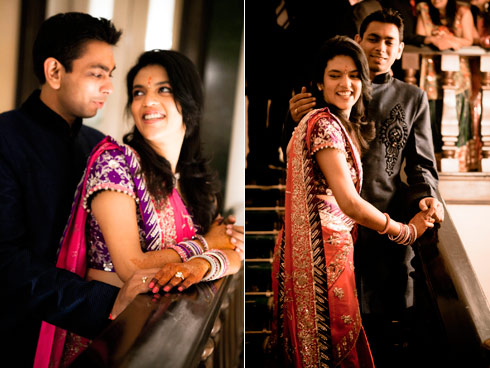 Her hair and makeup was done by Aniruddh Chakladar who gave her an extremely natural yet contemporary look.

For her Mehndi which was held at the Taj Bengal, Aakrti zeroed in on a bright orange and yellow lehenga by Pallavi Jaikishan. Since it was a morning function, she chose happy and light colors. The silver zardosi work gave it the necessary shimmer. She says: “I wanted a lighter lehenga for the Mehndi because I had to dance. Pallavi Jaikishans work appealed to me instantly.” 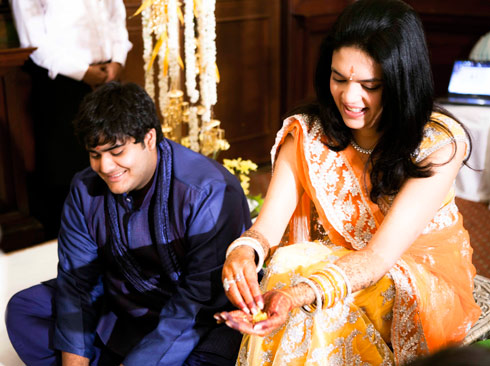 This Marwari wedding had no theme as such for any of the functions; it was restricted to only the decor and menu. However, the wedding mandap was carved and decorated in the shape of a beautiful boat with green, red and white detailing. “My friends fondly called it prem ki naiyya so the name stuck. We always envisioned a very traditional wedding and thats exactly how it turned out to be, it was magical.”

Aakrti was pretty sure of what she wanted and hence didn’t spend a lot of time deciding her outfits. She walked into a Sabyasachi store and could not take her eyes off this one piece which she indeed wore for her big day. “It was a beautiful flowing lehenga with very traditional colors. The velvet skirt was of a dark emerald green hue embellished with customary moti, zardozi and pearl work. He balanced the heavy bottom with a red blouse and gave me two veils with it; one in light mustard yellow and the other in red. The moment I saw it, I knew I had to have it. While deciding my outfit, Sabyasachis was the first store I walked into and came out in flat fifteen minutes after a few minor customizations. The designer himself draped me for the final fitting and approved on all the jewellery and other elements instantly.” While Aniruddh Chakladar once again used his magic on Aakrtis face and hair, the distinctive diamond and emerald jewellery by Radha Garg constituted in making her a unique bride. 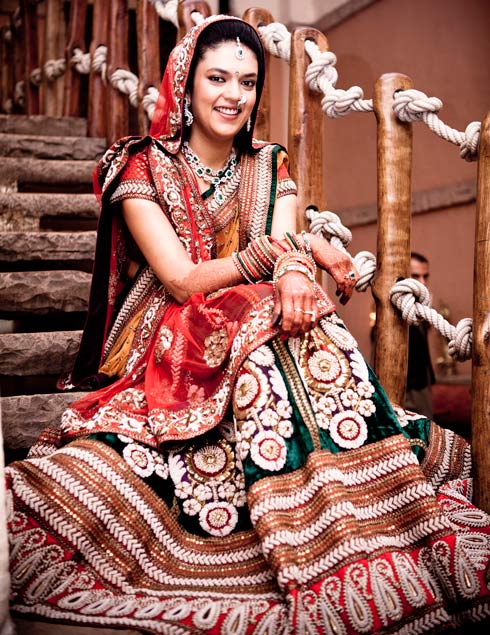 “I visualized myself to be a nervous wreck. I was actually more nervous thinking about how hassled I would be than I actually was during those four days. The celebrations went on in a whiz and I remember every moment of the wedding with joy minus any anxious thoughts. My parents managed the entire affair beautifully and its all thanks to them that I had a smooth sail during the most special days of my life. They fulfilled each and every need of mine and everything was presented to me on a platter. They refused to hire a wedding planner as they wanted to do everything on their own for me. I am so glad they did as I couldnt have had a better wedding.”