Sun, sand, beach and fun ‚ made the perfect backdrop for Ankita and Karans first meeting. They were both holidaying in Thailand when cupid struck and made way for love that was to last forever. Ankita from Delhi and Karan from Bombay had their fair share of long distance relationship and they tied the knot in style at Devigarh Palace in Udaipur.

Ankitas friends wanted to throw a lavish bachelorette party for her in Delhi. So they decided on an angel devil theme where she was the only one to be dressed as an angel. Ankita says, …I had a very clear concept in mind regarding my dress which I got done from Kanelle at Shahpur Jat, Delhi. A silver corset with a short white ballerina style skirt gave a very contemporary and glamorous look. The wings at the back went very well with the angel theme. She tied her hairs in a bun and wore solitaires. Aatika Kapoor did her make-up. Ankita wore a beautiful yellow saree by Anamika Khanna for Bhaat. Her look was fresh and breezy. “The yellow saree had fuchsia pink border and stunning lampi work creating a perfect blend of elegance and vibrancy. I teamed this saree with real flower jewellery that my friend got from Matunga, Mumbai. I got the paranda tied in my hairs because I wanted the entire braid to have flowers”, she says. Ankita wanted a more glamorous look for her wedding so she chose an Anjalee & Arjun creation. She says, …I wanted to wear red but not in a very traditional style. This lehenga was tomato red with stunning cut and very intricate embroidery making it look amazing. It had lotus motifs which appeared as if the petals were opening up. It was traditional yet sleek, with a bit of bling. The wine red blouse and purple velvet border on the dupatta and bottom of lehenga gave it a bold and contemporary edge. It had two dupattas ‚one was heavy that I wore in gujrati style, the net dupatta was light and I had it on my head. She teamed it with heavy jadau jewellery from Calcutta. 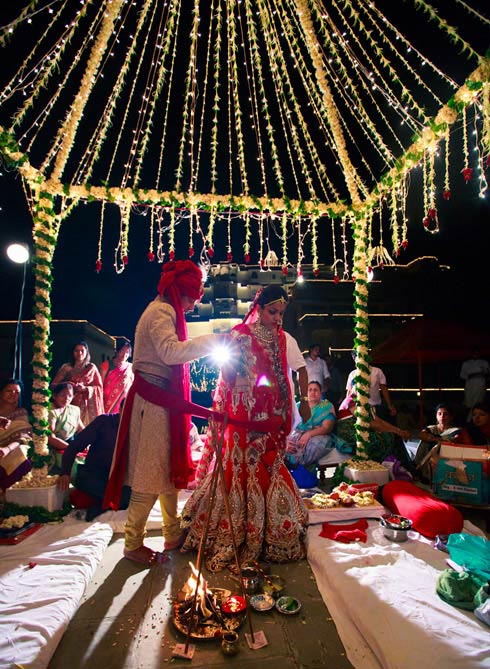