Rhea Kapoor, producer and daughter of Bollywood actor Anil Kapoor tied the knot with filmmaker Karan Boolani at a star-studded and close-knit wedding ceremony at her Dad’s plush Juhu abode. The couple who has been dating for the past 12 years first crossed paths on the sets of her sister Sonam Kapoor’s film ‘Aisha’. Karan, who worked as the assistant director in the film, and Rhea, who was 21 years old at the time, were smitten. Since then, the couple has been together and make frequent appearances on each other’s instagram posts.

Opting for a small wedding sans the usual pre-wedding festivities with only close family and friends in attendance, the duo decided to tie the knot at Anil Kapoor’s spacious home located in the posh neighborhood of Juhu. And, with WeddingSutra Favorite – DJ AJ belting out some of his best beats, the wedding guests were in high spirits throughout the evening! After tying the knot, Rhea posted stunning pictures of herself and Karan online which led to a flood of good wishes. The bride who is well known for her keen sense of style and has often been the guiding force behind her sister Sonam Kapoor’s most iconic looks left no stone unturned on her wedding day! Donning an elegant white chanderi saree with gold detailing from designer Anamika Khanna, Rhea exuded elegance. Paired with a half-sleeved blouse and a matching cape, the look struck a perfect balance between traditional and contemporary. However, the highlight of her look was her veil! Crafted out of numerous little pearls, this dainty veil, tied the whole look together perfectly. For accessories, Rhea chose to flaunt an array of pearl and kundan jewellery pieces designed by her mother Sunita Kapoor. This included a bold kundan pearl necklace, a long diamond-studded necklace, a dainty mangalsutra, jhumkas, an ornate haath phool, and kadhas. On the makeup front, she kept it simple with a matte brown eyeshadow accentuated by a dramatic winged eyeliner and nude lipstick. Her hair adhered to the classic style too, as she parted her long, glossy tresses in the middle and let them flow freely underneath her veil. 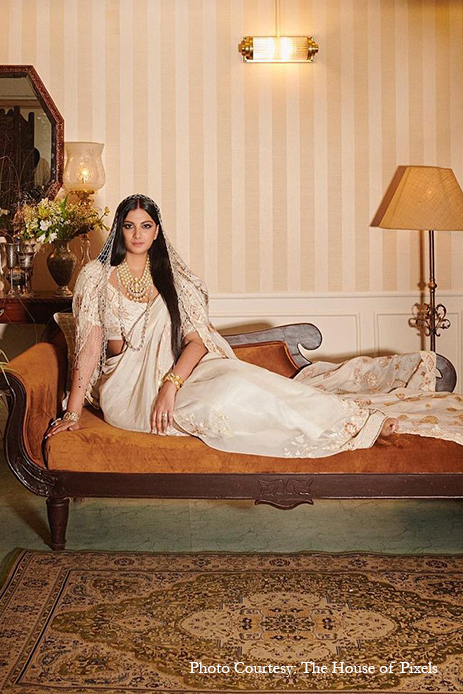 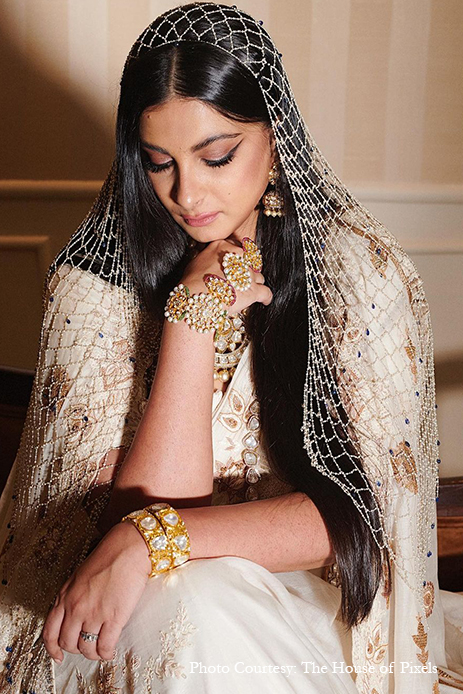 Karan, on the other hand, chose a Kunal Rawal outfit which consisted of an embroidered bandhgala, ivory pants, and a rich scarlet scarf that he draped around his neck. A star-studded affair given that the bride hails from the illustrious Kapoor family, the wedding was attended by her sister Sonam Kapoor and her shoe-designer husband Anand Ahuja, producer Boney Kapoor, Sanjay Kapoor, actor Arjun Kapoor and designer Masaba Gupta. Maid of honour Sonam was seen in a soft blue anarkali set by Anamika Khanna while Janhvi Kapoor wore a heavily embellished Manish Malhotra lehenga. 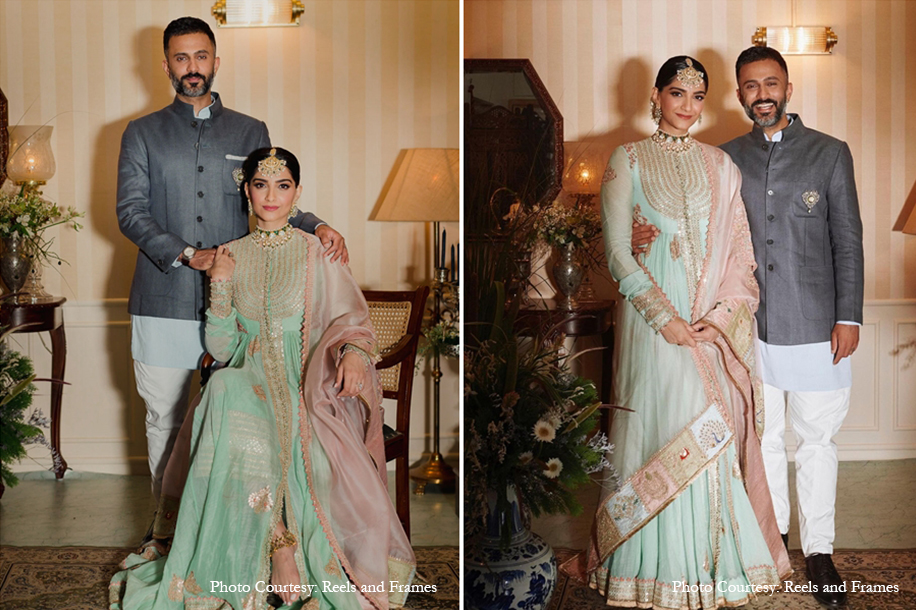 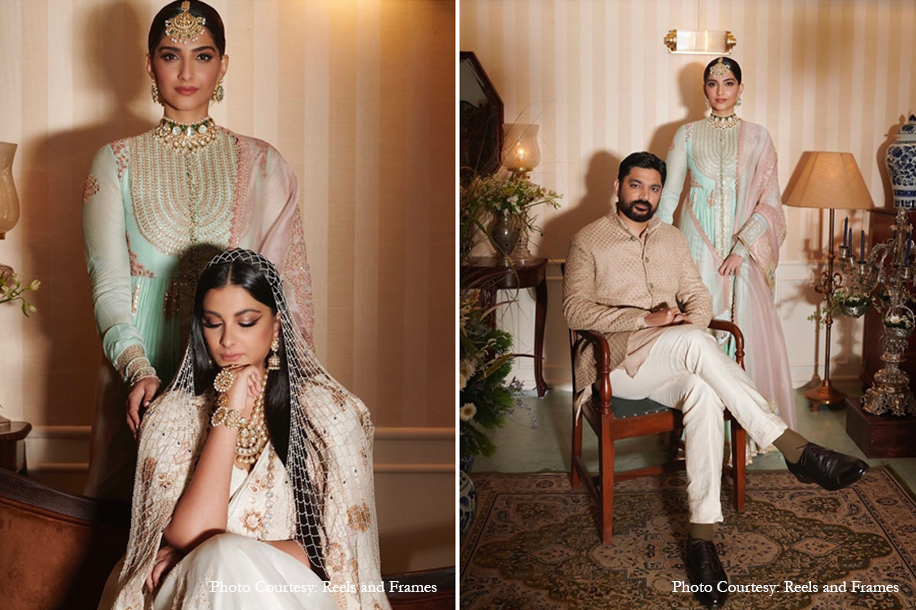 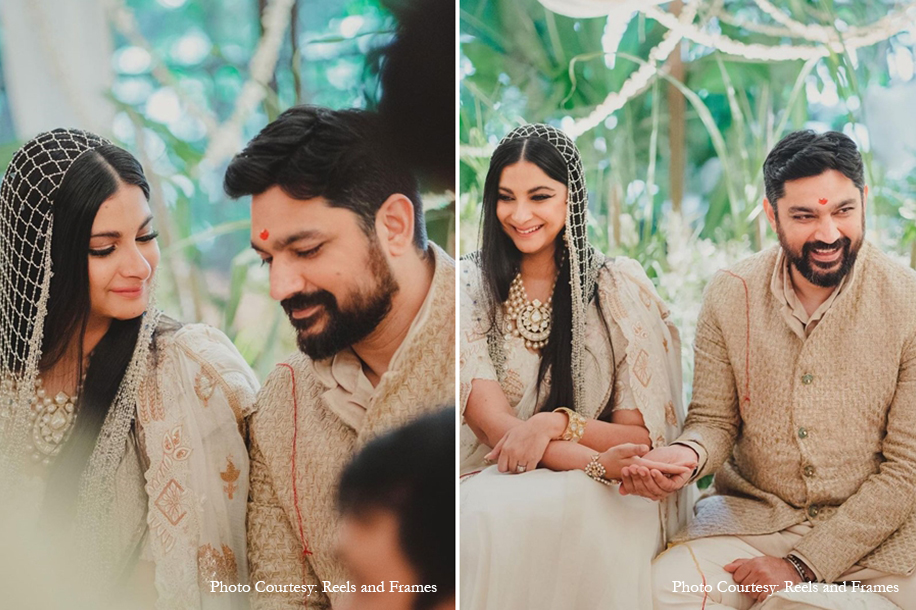 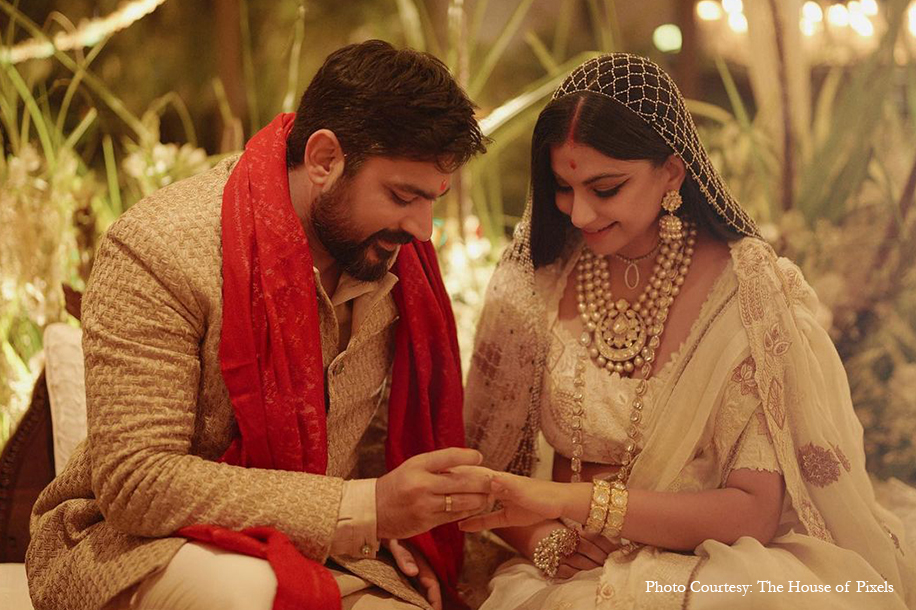 Following the close-knit wedding, the couple also hosted a post-wedding bash at Anil Kapoor’s Juhu residence which once again had Bollywood bigwigs in attendance. Dressed casually, the newlyweds were all smiles as they mingled with their friends. Rhea looked fresh in an off-white, full-sleeved daisy printed kaftan with an embroidered neckline while Karan matched her floral look with a black shirt printed with red florals paired with white pants. To mark the momentous occasion the couple was seen cutting a chocolate cake.

For the dinner, Rhea changed into a custom-made off-white organza circular dress paired with a box pleated organza cape with dramatic sleeves designed by Abu Jani Sandeep Khosla. With its delicate hand embroidered resham work, Rhea looked dreamy as she twirled around for the lenses. Her long tresses fell in gentle waves around her shoulders while her makeup was subdued with a matte brown eye look and a nude lip. Completing the look was a pair of tan block heeled shoes, a classic pearl necklace, a diamond-studded ring, and earrings. 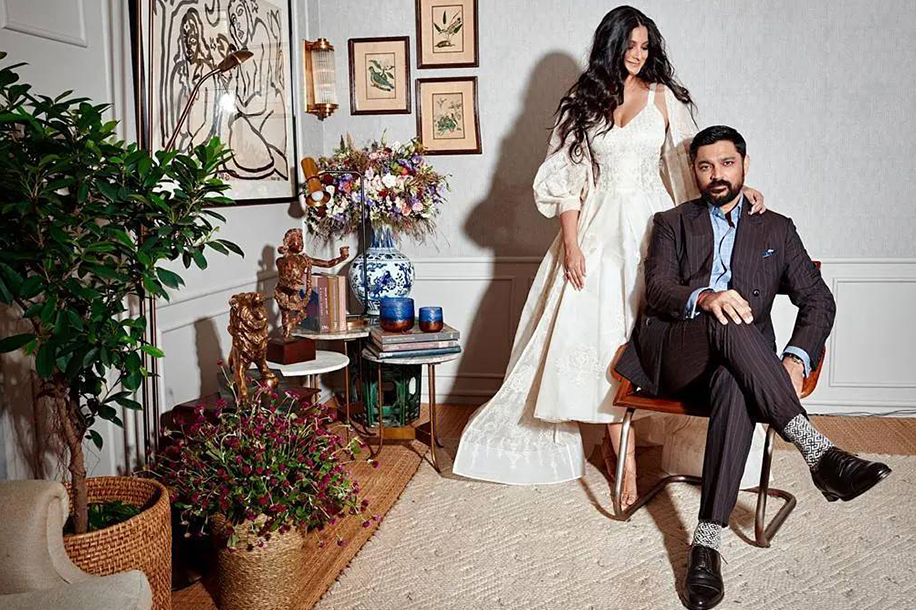 Later on, Rhea changed into a delicate organza skirt with love embroidered in different languages with red resham threads. And, adding an extra dash of color was a vivid red bomber jacket that merged the best of comfort and style as the new bride partied with her friends. Hosted by her best friends, the party was replete with glamorous decor elements like golden balloons and white protea flowers. Additionally, a sumptuous spread had everyone reaching for second helpings!