The former actress and star of ‘Suits’ looked like a modern princess in her elegant wedding Givenchy gown, which she paired with Cartier jewelry and a Queen Mary Diamond Bandeau tiara.

From a blind date in 2016 to a regal wedding at the historic St. George’s Chapel in Windsor Castle, Meghan Markle and Prince Harry’s love story is no less than a modern fairytale. Surrounded by 600 guests, the couple exchanged vows and took a carriage ride around the area circling the castle before hosting a lovely reception. 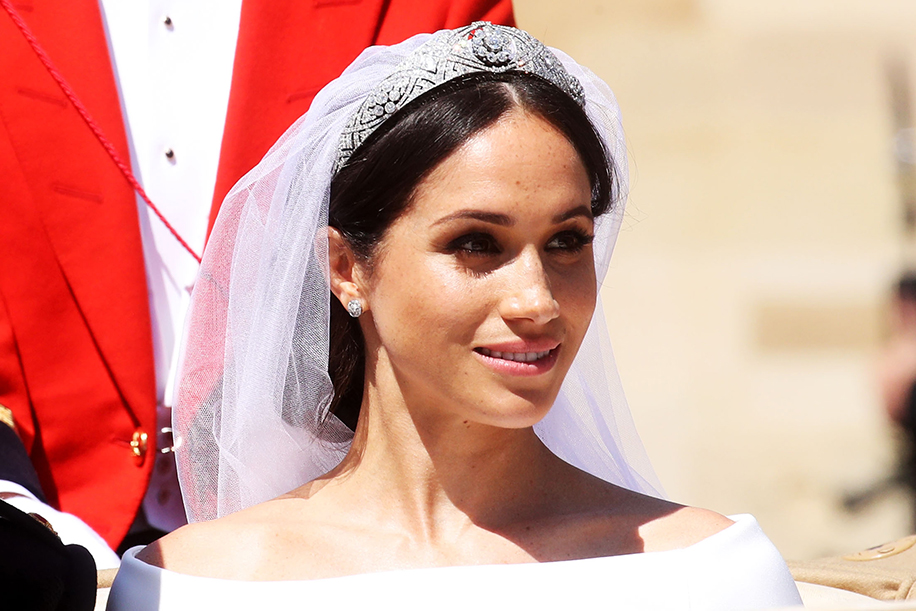 When they were first introduced to each other in 2016 via a mutual friend, little could the couple have predicted how quickly things would move from there on. Prince Harry revealed the journey of their romance in the couple’s first TV interview following their engagement. He shared that they went on a second date and he invited her to accompany him on a trip to Africa a couple of weeks later. After four months of dating, news finally leaked in October 2016 that Prince Harry was dating an American actress. After months of speculation, the two finally announced their engagement in November 2017.

The much-awaited royal wedding saw Meghan Markle looking poised and elegant in a satin gown designed by Givenchy’s creative director Claire Waight Keller. The bride wore her hair in a low, center-parted chignon. Her flowing 15-ft silk tulle train and veil were embroidered with floral motifs of blooms found in 53 Commonwealth countries. Flowers such as the California Poppy to symbolize the place of Meghan’s birth – California – to Wintersweet which grows in the gardens of Kensington Palace and Singapore’s Vanda Miss Joaquim orchid also featured in the embroidered bouquet of blooms that lined the train.

Meghan kept her jewellery minimal with Cartier diamond earrings, a ring and a single bracelet are worn on her right hand. However, her glittering Queen Mary Diamond Bandeau tiara was borrowed from Queen Elizabeth.

Meghan kept her makeup understated and natural, with the focus primarily on her smoky eyes which were darkened with eyeliner and mascara. Her white wedding bridal look did not camouflage her freckles. A deliberate loose, messy bun and pink lips finished off Meghan’s relaxed, natural look which was perfect for the day wedding. 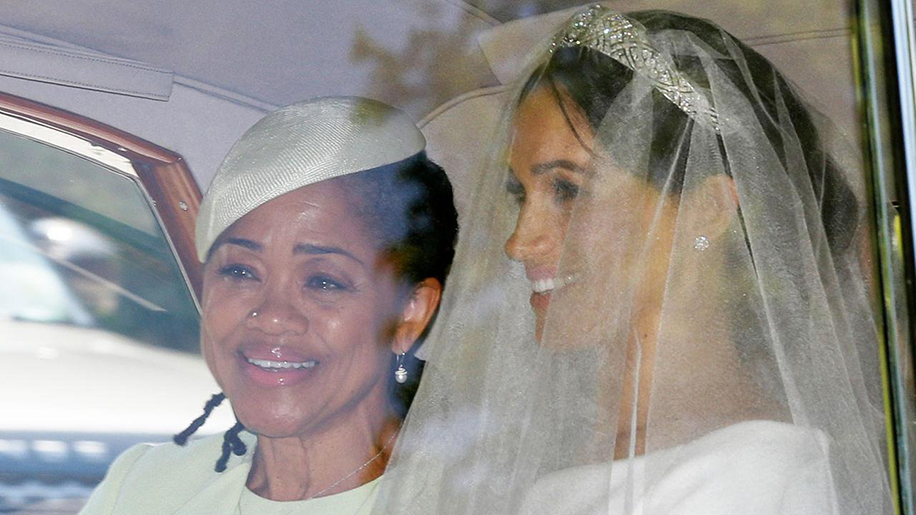 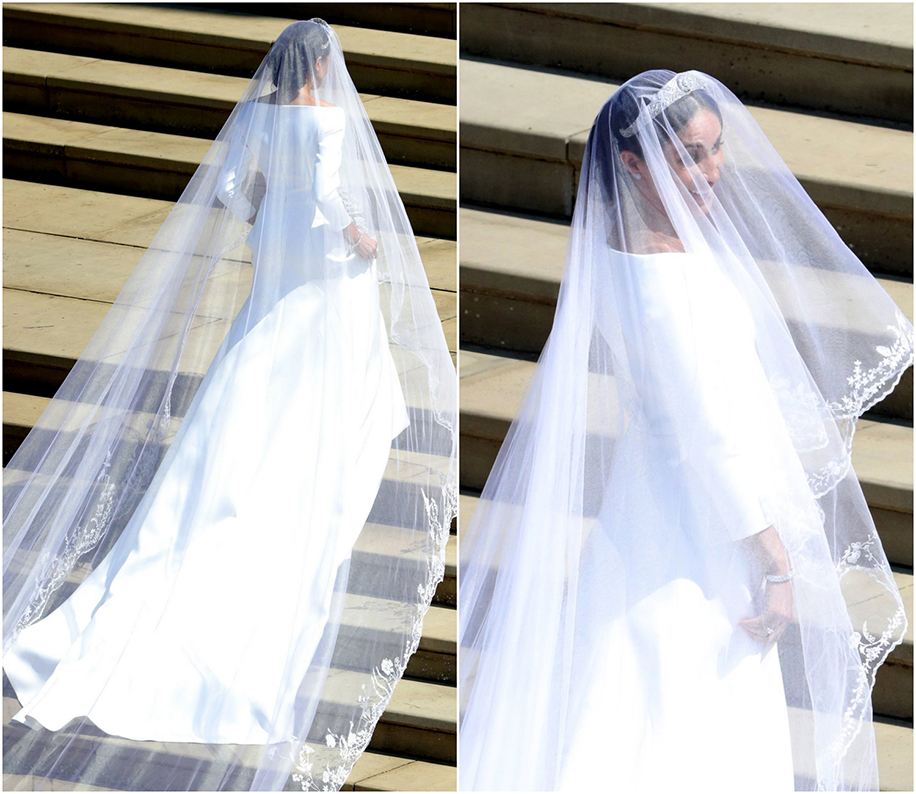 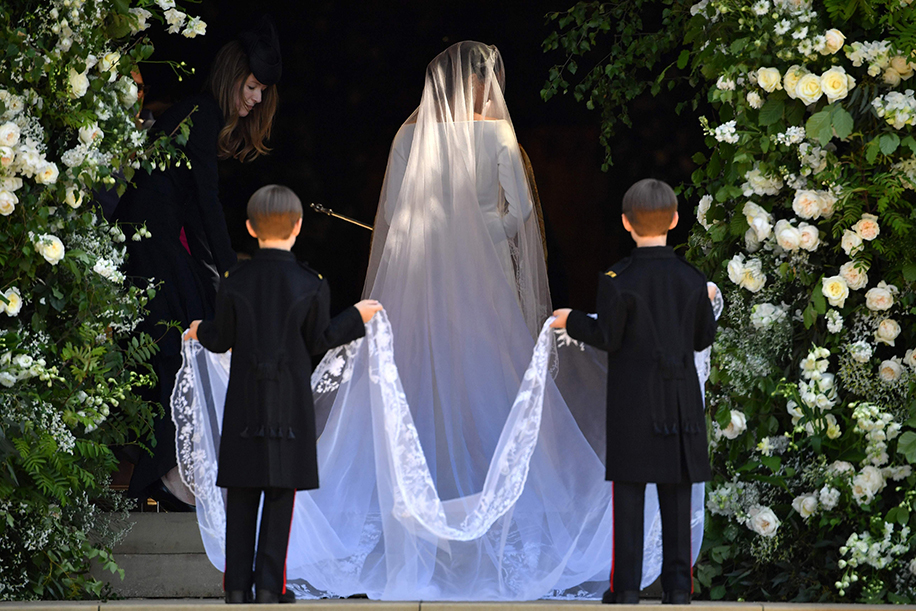 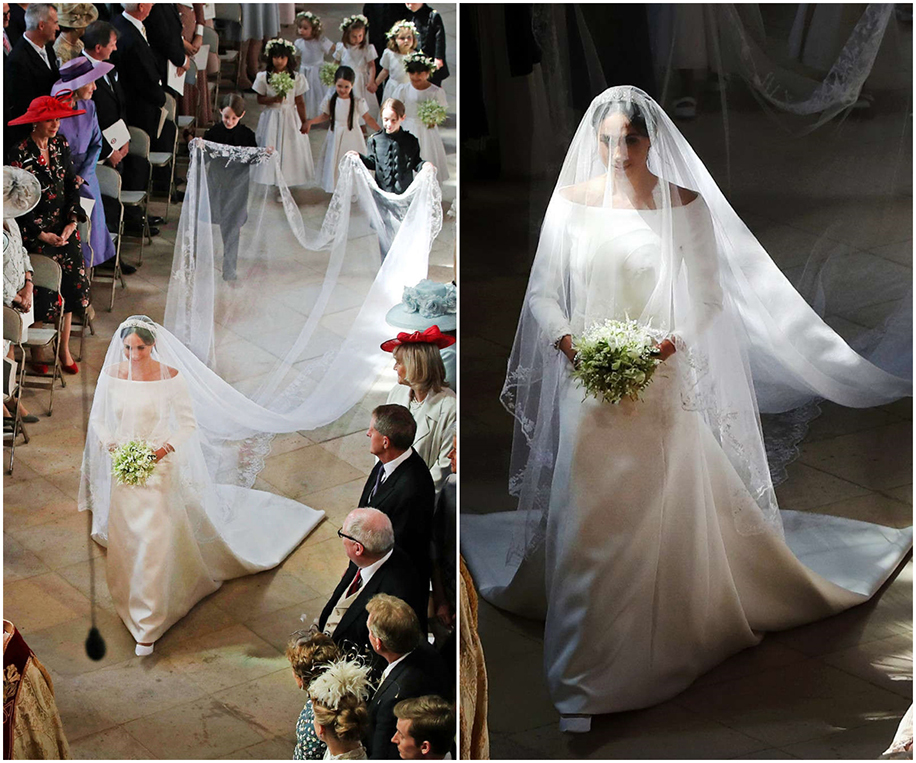 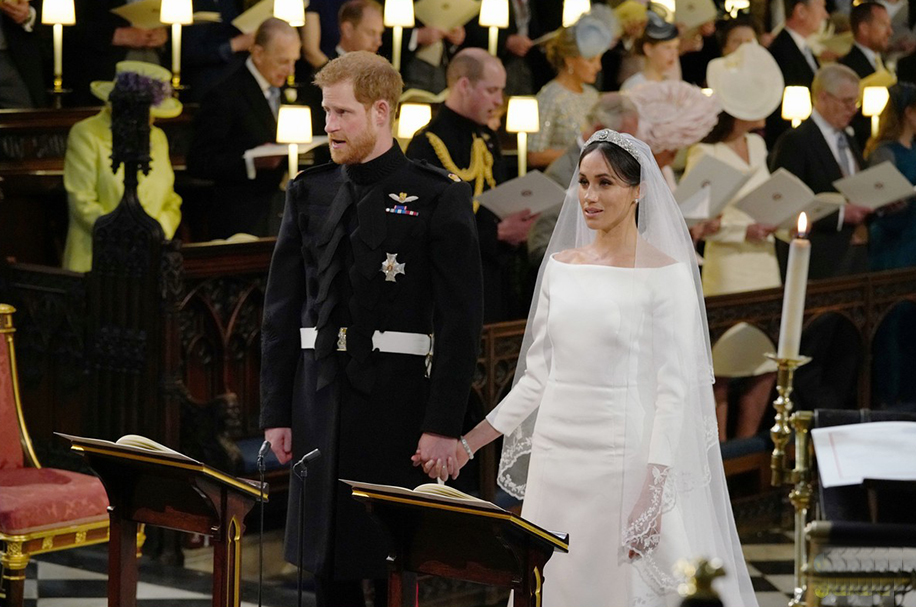 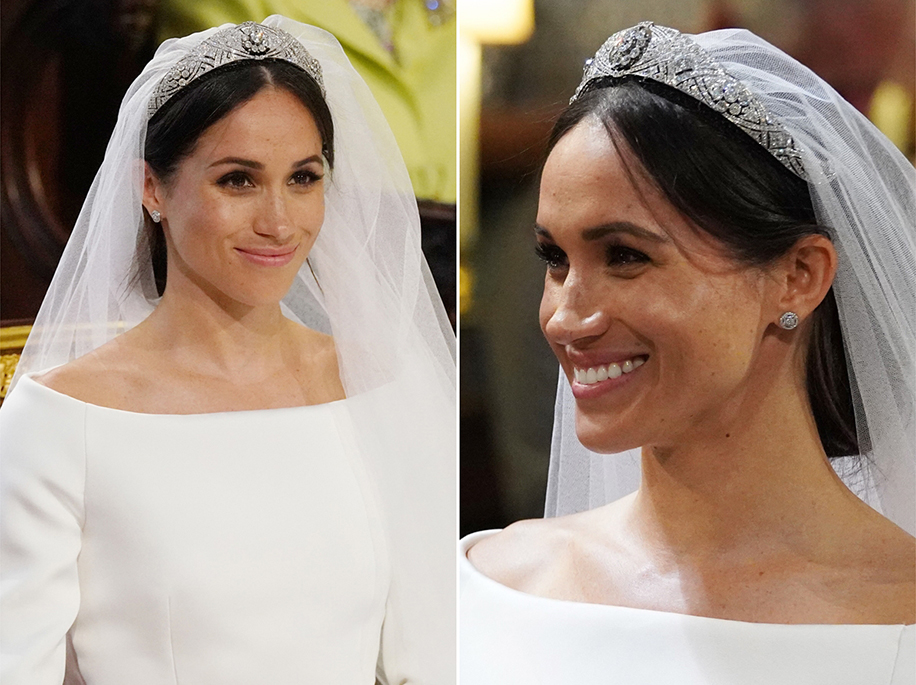 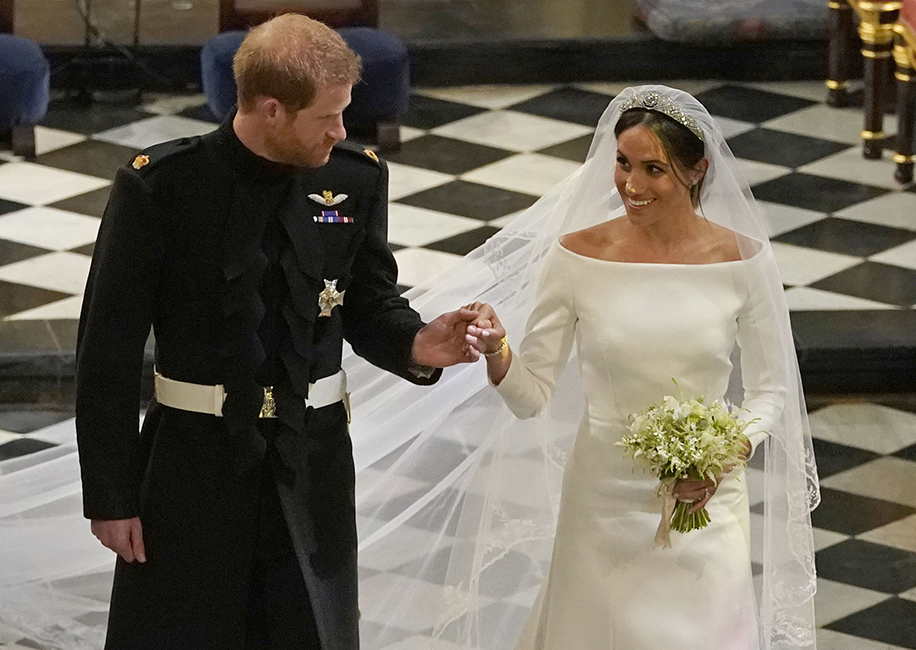 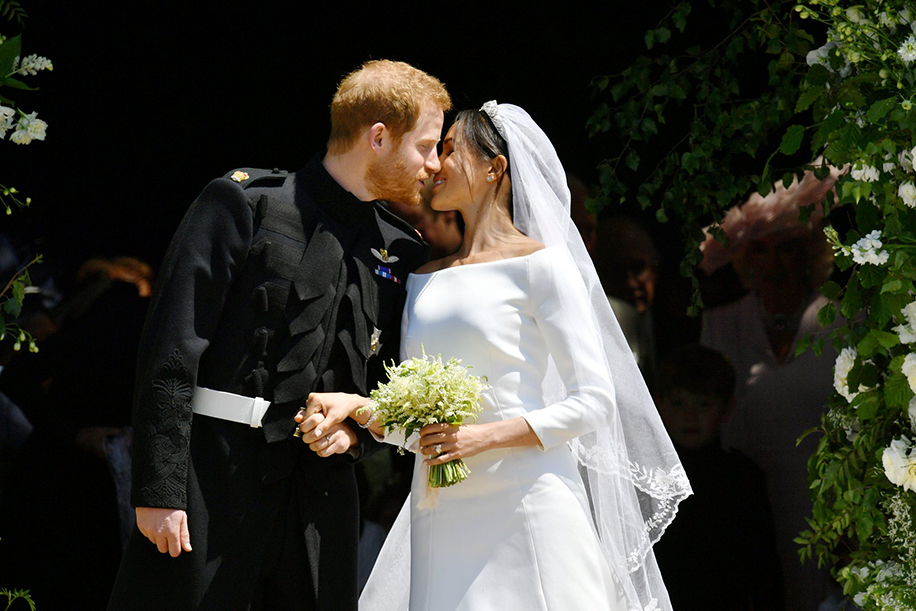 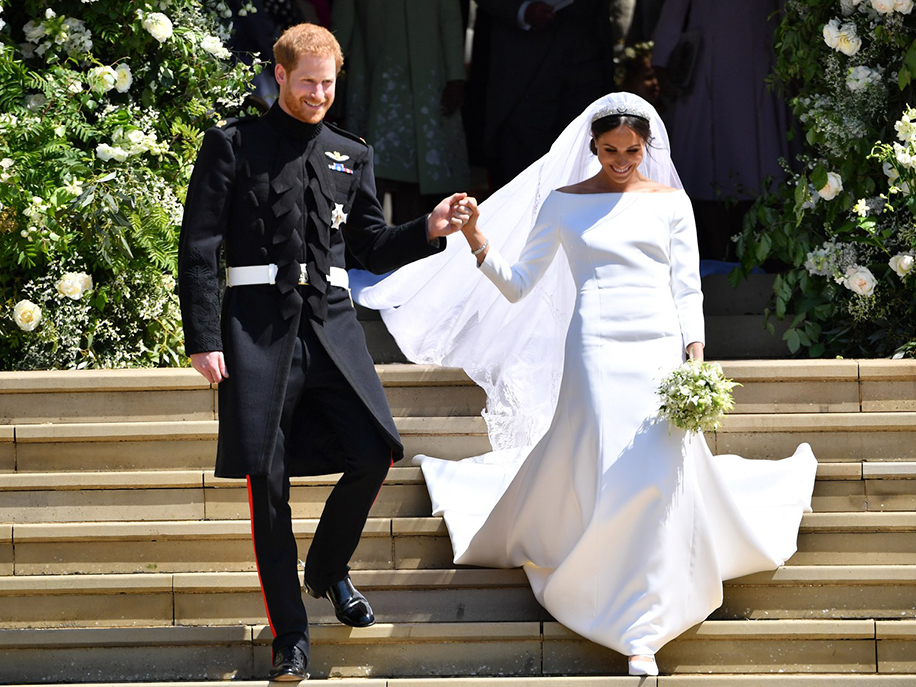 For the reception, the stylish bride chose a bespoke lily white high halter-necked silk crepe gown by British designer Stella McCartney. Her shoes by Aquazurra were made of silky satin, nude mesh, and baby blue soles. Meghan also chose to wear a stunning aquamarine ring that once belonged to Prince Harry’s mother Lady Diana – it was just one of the many tributes the couple included at their wedding to honor her memory. 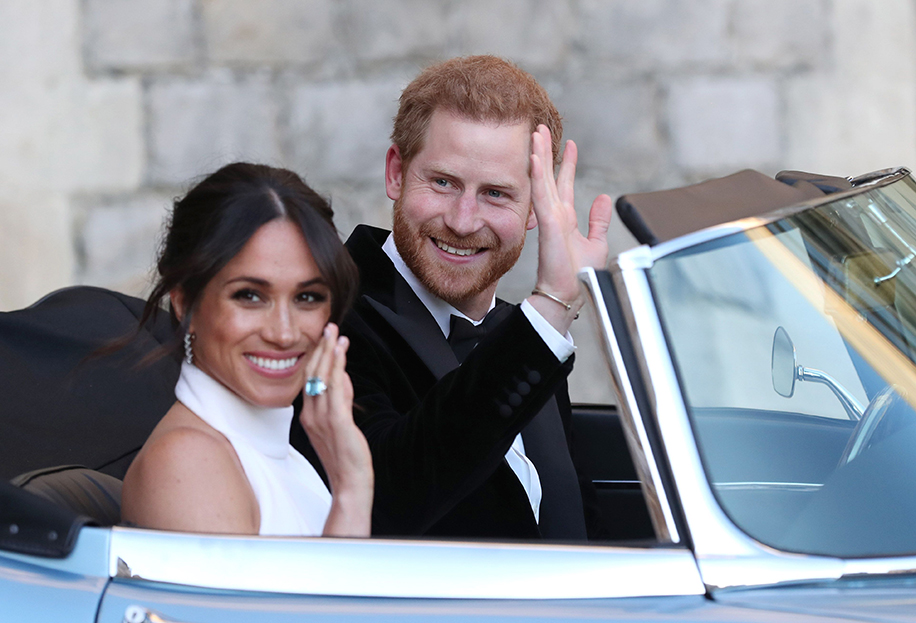