From a mandap that had a beautiful temple vibe to a Sufi music night, Puneet and Nisha's destination wedding in Udaipur was a treat for the senses.

She found him a little strange at their first meeting, but he was determined to get to know her from the start. Their journey led them to a beautiful wedding at The Ananta in Udaipur, Rajasthan, where they planned and pulled off lavish celebrations that were high on loveliness and elegance. 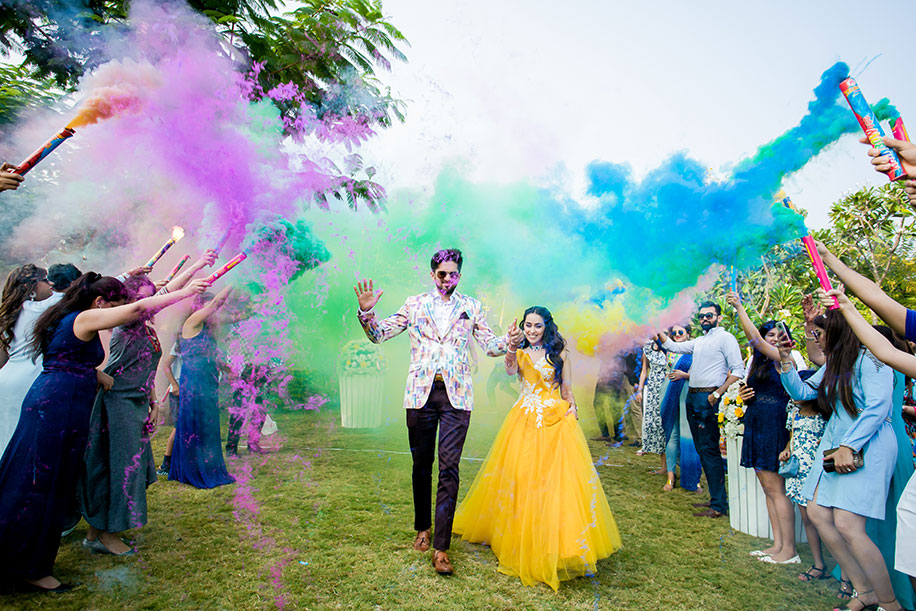 How We Met
“Both of us live in Dubai, UAE, and met at a common friend’s birthday dinner. The first time we met I thought Puneet was strange. I had worked extra hours at the office that evening so I showed up a bit late to the party. After meeting everyone I knew and getting introduced to few new people, I sat at the end of the table. Next thing I saw was Puneet getting up, leaving his original seat and moving three seats down just to sit opposite me so that he could start a conversation. That is how it all began.”

Proposal
“He asked me to meet his parents after just two weeks after our first date. Once again I thought he was weird. However, now that I think of it, I guess he was just clear from the beginning. As for me, I took way longer to realize my feelings for him which developed gradually. I don’t know about love, but every time we were together I felt calm. It was like coming home. For the next few months almost every day he would ask me ‘Thakwani, will you be my Manwani?’ and I would always laugh it off. So he got his parents involved and just like any arranged marriage our families met and put things in place for us.”

Wedding Venue
“We got married at The Ananta in Udaipur, Rajasthan, which is an expansive property with about 200 rooms. The entire resort was booked for our guests and they had an array of locations that made for great venues for our wedding functions. The areas that we used for our nuptials were the Aravali Grand Ballroom, Palm Deck, Aravali Lawn and Rangbhoomi Amphitheatre.”

Mehndi
“Our mehndi was a small outdoor affair for about 60 family members who arrived at the destination a day prior to the bigger functions. The decor was colorful with bottles hanging from trees and a beautiful swing that had been set up for the Puneet and I which was decorated with colossal flowers in the shades of white, pink and purple. On this occasion, we played a ‘matchy-matchy’ couple by dressing up in the same shade of green. I wore a crop top and palazzo pants from Limerick in New Delhi while Puneet opted for a kurta and salwar along with a bandi that was made in a tone darker.” 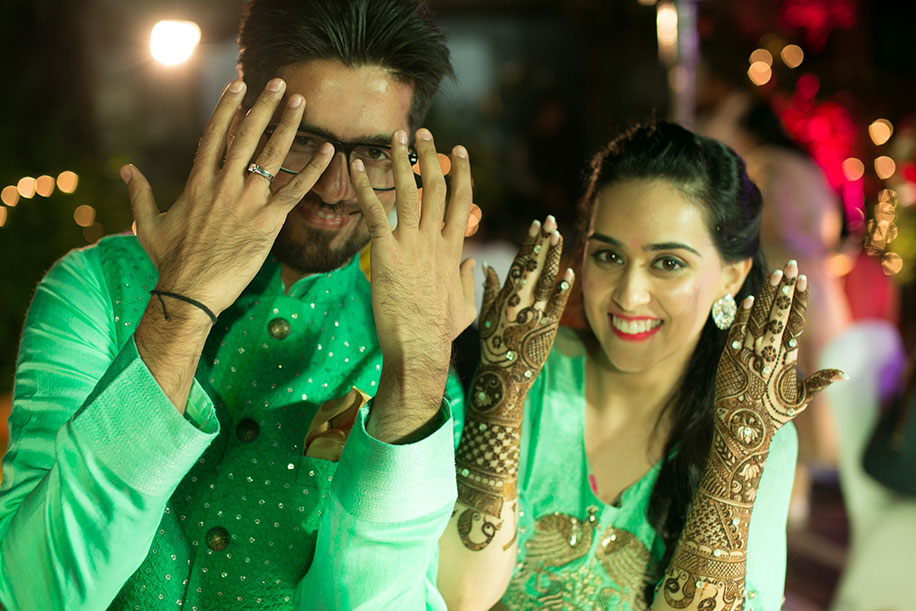 Welcome Lunch and Second Mehndi
“This was the day when our guests were arriving so we planned a Welcome Lunch for them. On this day too we had mehndi artists for everyone who wasn’t present at the earlier mehndi function a day ago. The venue was done up in gorgeous drapes in shades of orange, peach, corals, neon green and pink. There was a swing with colored tassels and multiple gazebos under which our guests could relax and get mehndi applied.For this function too, I again picked an outfit from Limerick. It was a crop top with one-shoulder cape and a skirt. Puneet wore a Jodhpur jacket with polo pants.” 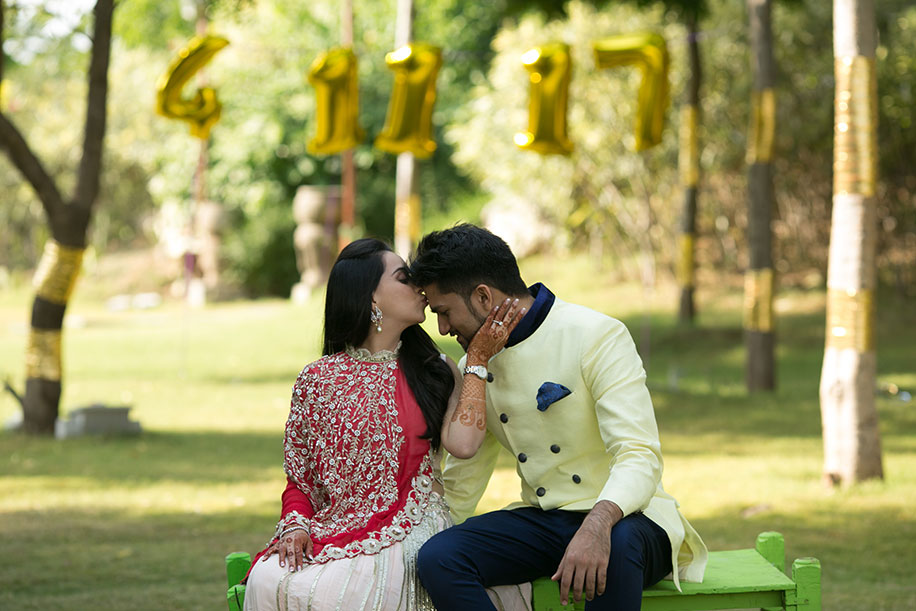 Sangeet
“The stage for our sangeet looked nothing less than that at a concert. It was inspired by the musical instrument, keyboard, and had two designated entry points, one for me and the other for Puneet. What was great was that this feature blended well with the backdrop, so none of the guests expected to see us walk into the venue from there. Later, I surprised Puneet with a solo dance performance that was dedicated to him. My electric blue lehenga was designed by Gaurav Gupta. Puneet went for a jacket and trousers by Shyamal and Bhumika.” 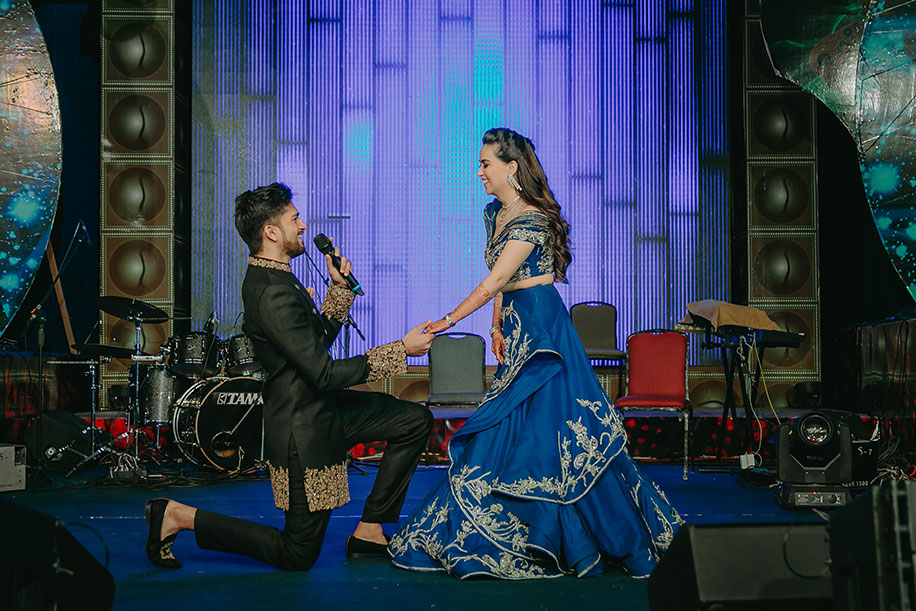 Pheras
“Our mandap was constructed using lots of golden elements and decorated using red roses. Hundreds of diyas lit up the entire venue and a water body was created in front of the mandap and was enhanced with floating oil lamps. The decor made the location look like a temple. We had our ‘varmala’ (garlands exchange ceremony) first and this was followed by Vedic pheras. For this, a team of 11 priests sat together chanting and translating the chants in Hindi and singing while we proceeded with the rituals. My gold lehenga for this ceremony was from Jade, and I wore a red dupatta which covered my head. I had my husband’s and my name embroidered on this ensemble as I thought it would be fun to make him look for his name on my massive skirt instead of in the mehndi design on my hands. This also made my lehenga unique to me and therefore became a little more special. Puneet went with a sherwani from SVA by Sonam and Paras Modi.” 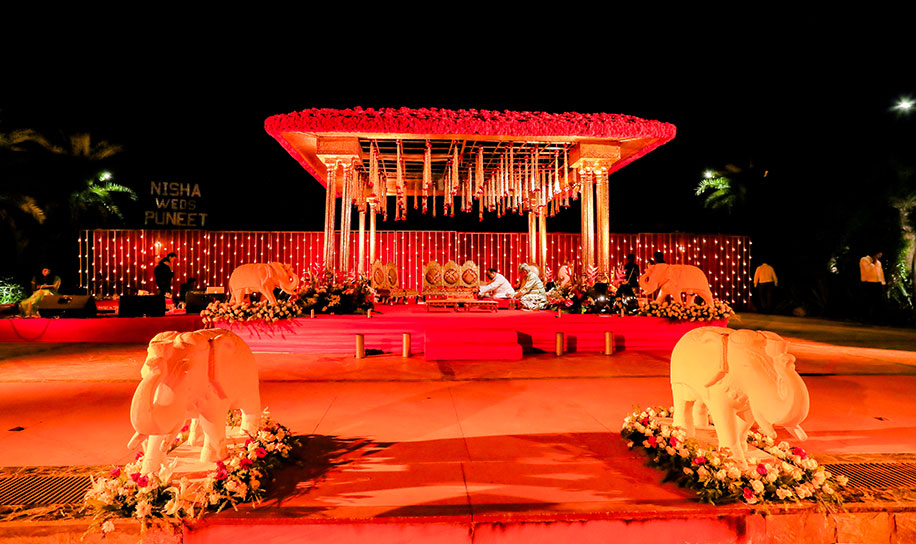 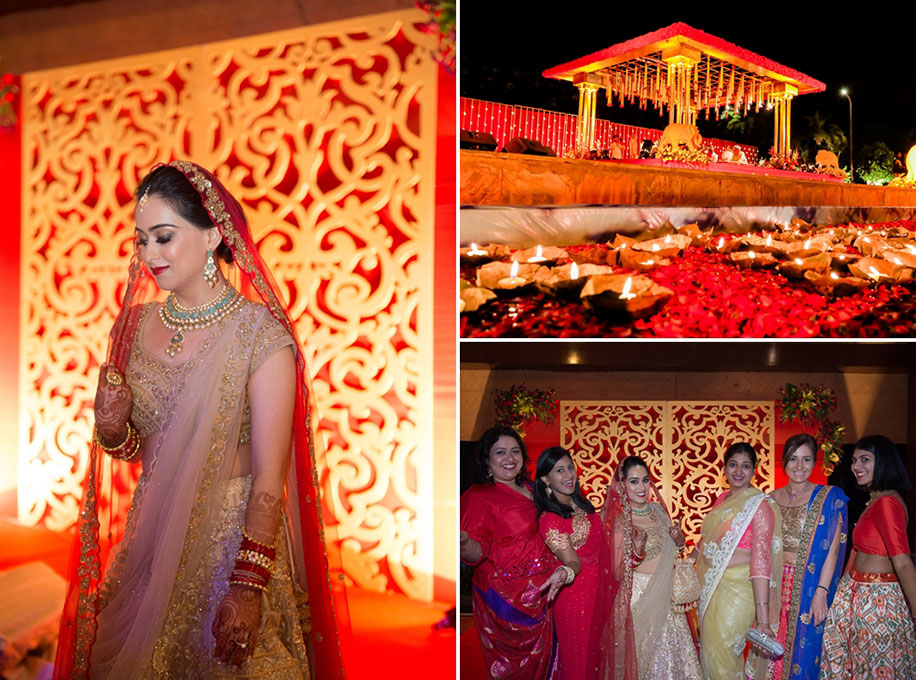 Reception
“At the reception, our closest family members gave some heartwarming speeches where they expressed their dreams of a happy future for the two of us. The stage was decked with flowers and I wore a red gown by a Filipino designer based in Dubai.” 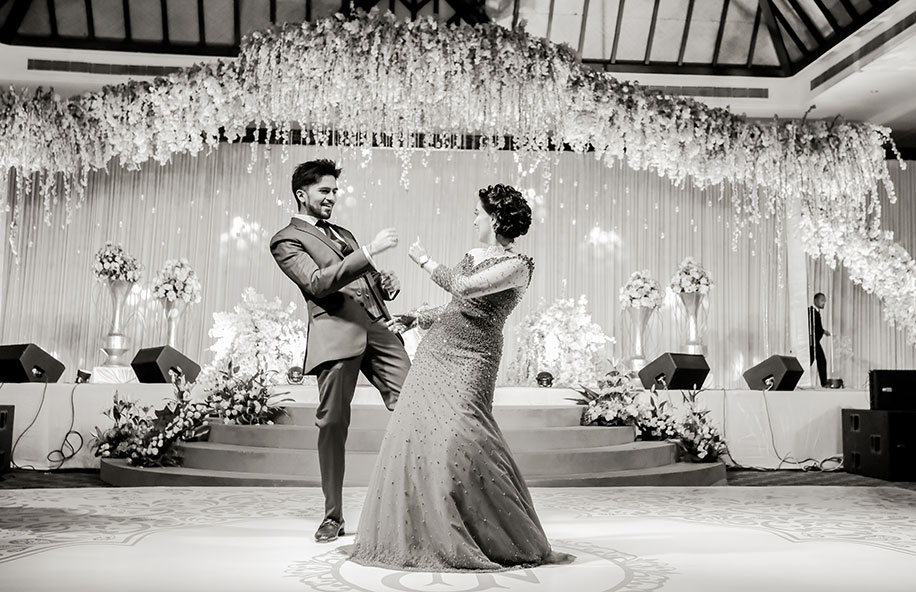 Garden Brunch
“This was meant to be a very casual brunch party but turned out to be the most happening event where we had to stop the music so we could be ready on time for the next function that evening! The vibrant yellow and white decor was hard to miss and we had the dance floor designed to look like a huge snake and ladder board. The set up looked great with my yellow gown. We also had a percussionist who played music using empty vessels and did a great job at keeping our guests entertained.” 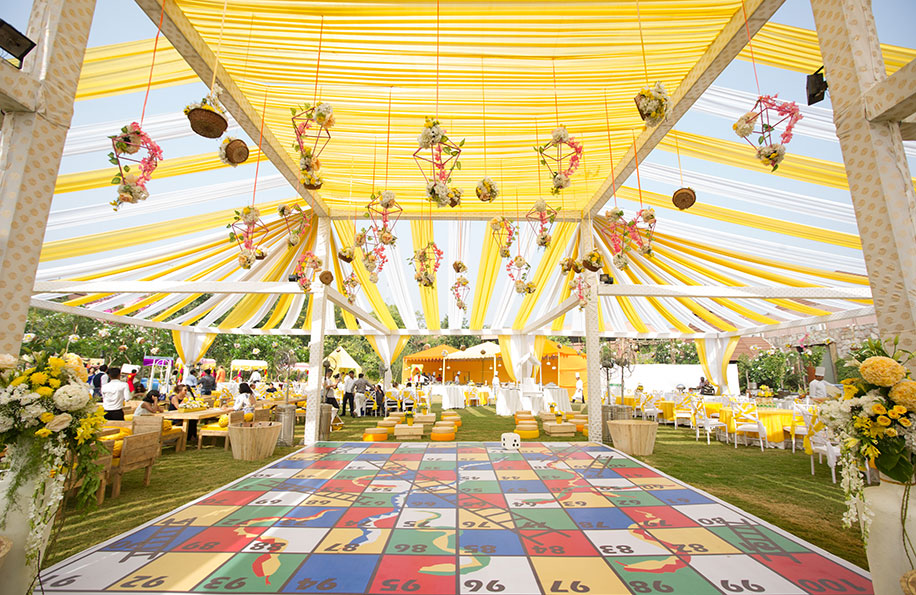 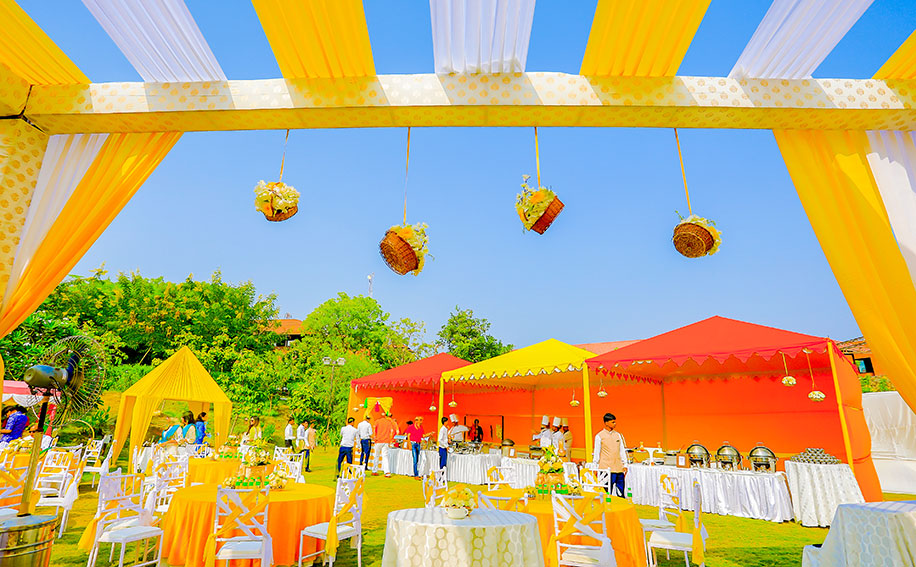 Jashn-E-Mehfil
“We knew that our guests would be tired by this time so we planned a night for them where they got to sit down and appreciate good Sufi music which was performed by Toshi. I wore a Manish Malhotra outfit for this function and Puneet chose a kurta and lounge pants by SVA by Sonam and Paras Modi.”

Advice For Couples
“Don’t forget to have a blast at your own wedding. The details will be forgotten and when something doesn’t go as planned, remember it’s only you who really knows; the guests are just happy to see the couple enjoying. Make memories for yourself and stress less about making things perfect.”