A colorful mehendi bash, a simple Gurudwara wedding and the bride's 'bidaai' on a bike! Check out highlights of Aakriti and Anshul's wedding celebrations in New Delhi.

Aakriti and Anshul got to know each other when they toured the country together while working on a TV show. Bride Aakriti shares highlights of their simple yet elegant wedding celebrations whose stunning pictures were captured by WeddingSutra Favorite, Camera Waale Baraati. 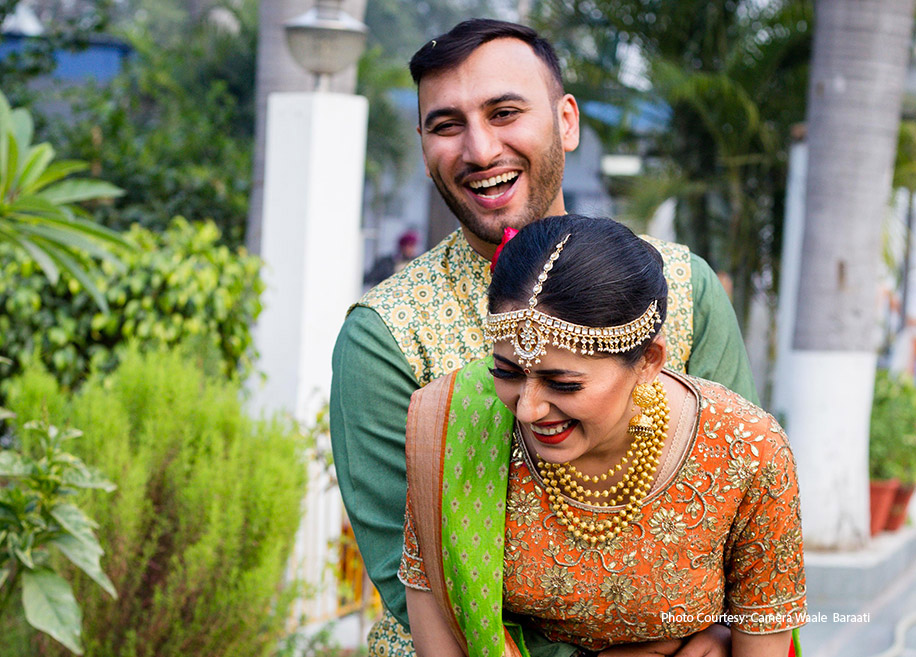 How We Met
“Anshul and I were part of the production crew for the television show ‘Roti Rasta Aur India’ for the television channel FoodFood. I was the director, and he was the producer. For the shoot, we spent nearly 70 days together traveling across India, and that’s how we got to know each other. About two years after the show, we realized that we liked each other, so that’s when our romantic relationship started. He left the company and started working in the events field, while I continue working in TV and video production.”

Wedding Venue
“We got married at Gurudwara Dam Dama Sahib in New Delhi. Anshul and I wanted a hassle-free wedding that didn’t go on for too long into the night. That’s why our initial plan was to have a court marriage, however, since our parents didn’t want a wedding like that for us, we agreed on a gurudwara wedding. The joint mehndi was at Tughlak Road and was hosted by my mother’s cousin.”

Mehndi
“I wanted a very colorful mehndi on a winter afternoon, and Anshul’s childhood friend Jalaj Narang did a stupendous job creating a setup that was bursting with bright colors and filled with interesting elements. The main colors at the event were pink, orange and yellow and golden accents in the form of bells which added a hint of glitz to the setup. There was a swing that was swathed with yellow and orange marigolds, a canopy where buntings were woven with each other to create an interesting ceiling, a large backdrop that looked like a checkerboard made with marigold blooms and many beautiful features. I was in awe of his work. All our guests also loved the decor, especially the decorated cycle-rickshaw that was a part of the setup. I wore a pink and green lehenga from Ravissant while Anshul picked a black and white outfit from Karan and Moin.” 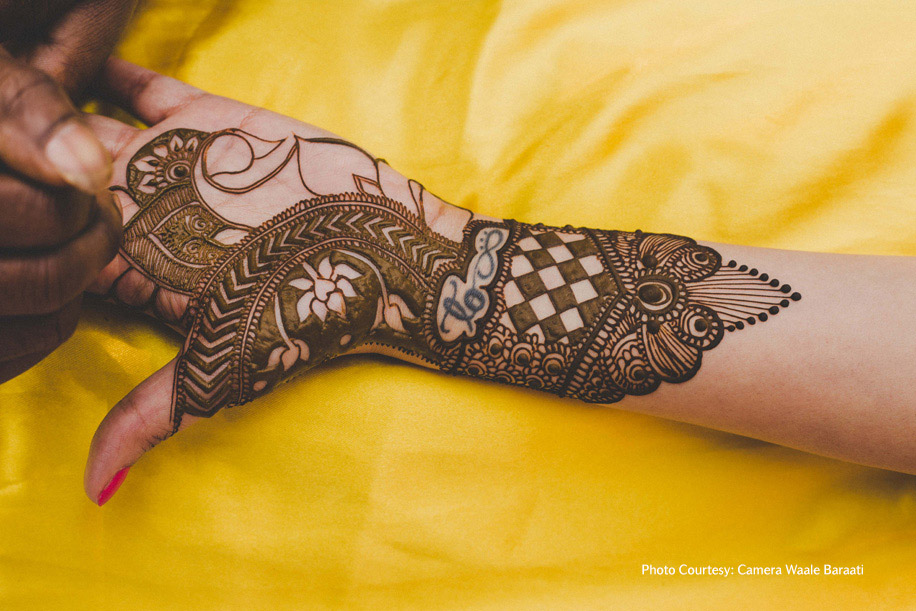 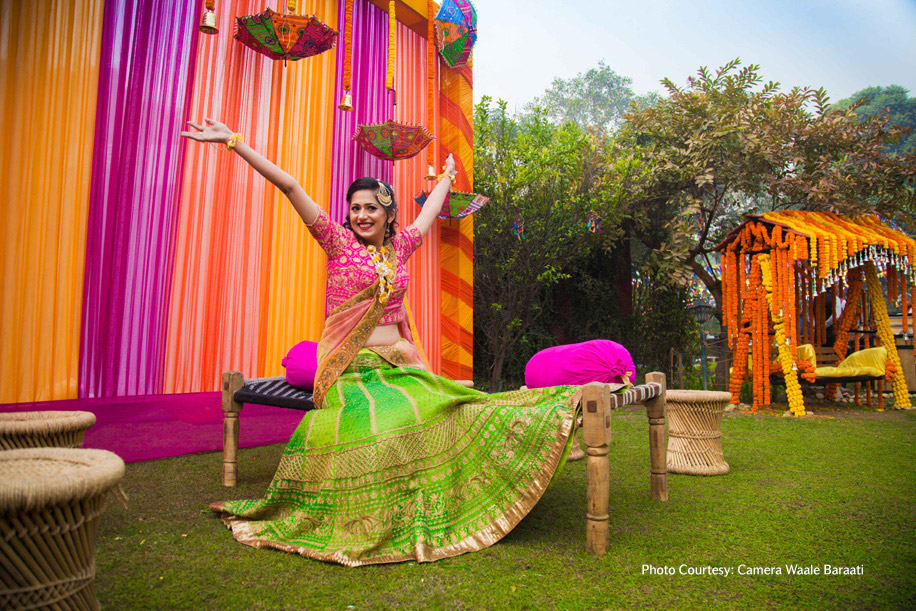 Wedding
“Our wedding ceremony which took place the following day was a fairly simple affair. We exchanged our vows at the Gurudwara after which Anshul and I rode away on a bike! Anshul is an avid biker so took me home on his prized Triumph Bonneville motorbike. My ‘doli’ (palanquin) was something that was loved by everyone at our wedding. Once again I wore a creation from Ravissant. Anshul’s ensemble was Karan and Moin. My lehenga and blouse were made in different shades of orange and paired with a green dupatta with all over golden work. Anshul’s green outfit matched my attire perfectly.” 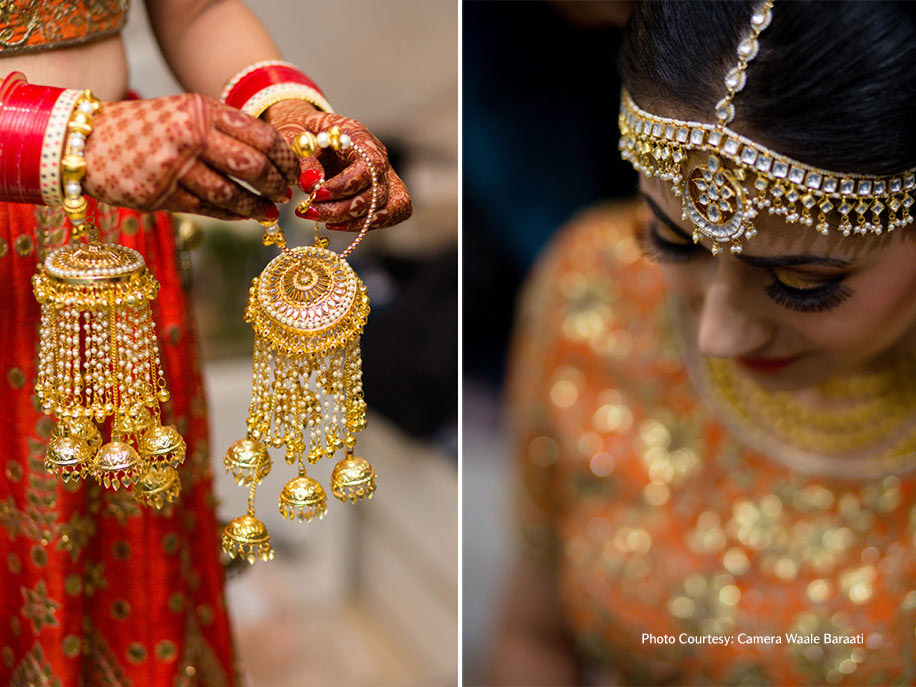 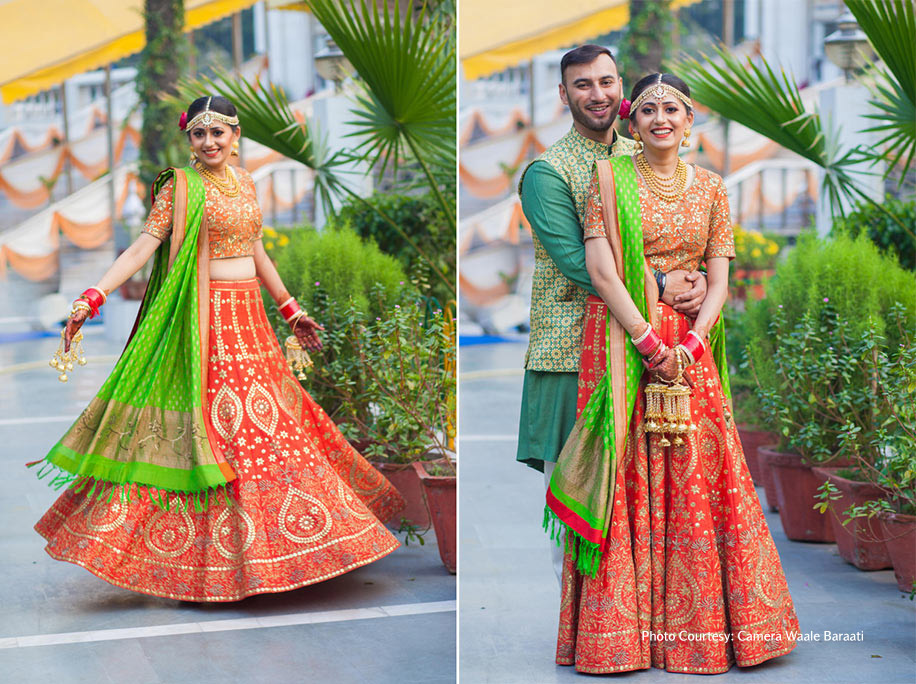 Advice To Couples
“Keep the wedding celebrations simple, have fun and don’t get stressed because of the pressures around you.”