A vision in Ruby red, embellished with sparkling sequins, this bride’s wedding dress reflected her love for tradition with a striking twist.

Diviyanshi and Rajneil knew each other since childhood but somehow, both of them never really explored the possibility of love. However, as time flew by, destiny intervened, and these two souls found their perfect match in each other. Held in the bustling city of Sydney, Australia, this duo’s wedding was an expression of their personalities with its unique, modern theme that fused together contemporary and traditional elements seamlessly to create a wedding full of heartwarming moments that would stay with them for a lifetime. 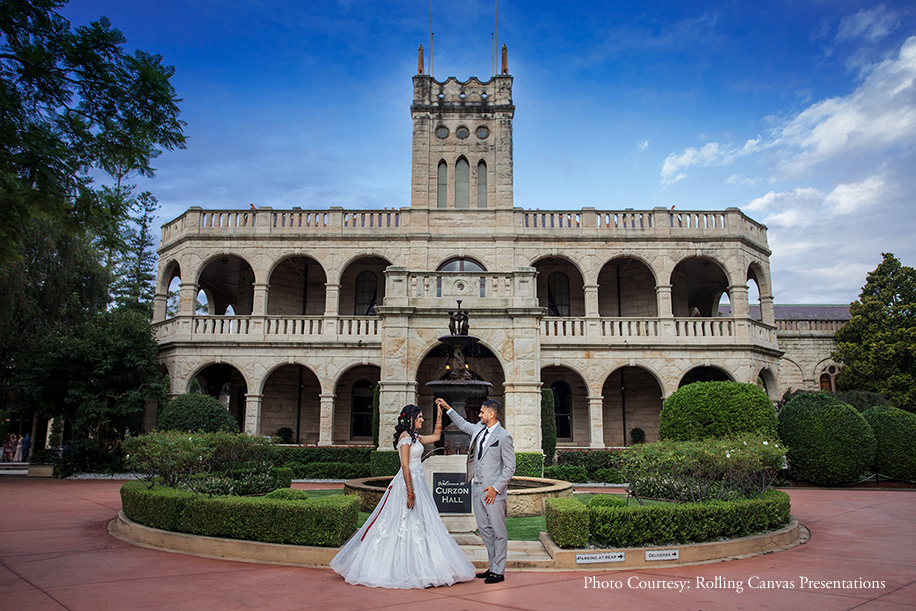 How They Met
Diviyanshi shares, “Rajneil and I have known each other since childhood, so I can’t really recall the first time I met him. We were family friends, which meant that we would attend family functions and religious gatherings together. At first, he was just another guy for me who I would speak to every once in a while. But then, somehow, everything changed when I was experiencing a ‘low’ phase in my life. Harboring me throughout that difficult time, was my neighbor’s adorable toddler who was a ray of sunshine and a welcome distraction for me.

Fast forward to five years later, when we began conversing on a regular basis and got closer with every interaction, he was unaware that I’d been in love with him for the longest time. Little did I know, that even he felt the same about me and had even told his best friend that he would marry me someday.”

The Proposal
Recollecting her absolute surprise when Rajneil popped the question to her during their Hawaiian holiday, the happy bride shares, “Rajneil and I had always wanted to go to Hawaii. So, as a birthday present, our parents organized a trip to Hawaii where they would accompany us as well.

With five days of adventure before us, Rajneil was constantly in touch with the travel planner to organize a romantic spot to propose. His first plan included the Kilauea Volcano but, unfortunately, the volcano was erupting and could only be viewed from above. His next attempt was on the Sunset Cruise by Majestic but just as he had pulled the ring out of his pocket, the Captain ordered us all to sit down.

And then, came the last plan, which in my opinion was the best! Rajneil had planned for us to take an Island tour which started off just as planned and soon, we were on the sunset beach. After a long exhausting day, Rajneil was adamant to wait till sunset to capture the perfect shot. Impatiently, I waited, and then, when the sky was just perfect, he suggested we take a picture of us looking at each other. And, as we stood there on the beach, he went down on one knee and proposed. Everything after that moment is a blur, as I said an excited ‘yes!’ and kissed him!”

Wedding Venue
When it came to choosing the ideal venue, the couple had zero qualms and promptly chose the Lantana Venues located in Sydney, which fit all their requirements perfectly. A vast venue that could hold up to 1200 guests, the venue’s impeccable hospitality and beauty ensured the guests were left spellbound.

For their reception, the duo chose the majestic Curzon Hall, which, with its old-world architecture lent a beautiful backdrop to their royal themed wedding.

Wedding Planning
Acknowledging the daunting task of planning a perfect wedding, the couple took a headstart on their planning well in advance. On the photography front, the duo relied on the Rolling Canvas Presentations while they roped in Fareha Bridal Studio for the hair and makeup. Adding to the team were florists Paper Daizy and Papermint who created their elegant wedding invitations.

Wedding
Following a ‘royal Indian theme’ which reflected their rich cultural roots, the couple’s big day was replete with traditional elements that fused perfectly with their modern outlook. Surrounded by delicate blooms, pristine white drapes, and golden archways, their wedding was an expression of casual glam served with a dollop of tradition.

Diviyanshi shares, “Our inspiration behind the wedding was ‘royalty’. We wanted to make a statement very similar to celebrity Priyanka Chopra and Nick Jonas’ wedding. Also, I opted to don a dress instead of a lehenga, since I felt that it looked more ‘royal’.” 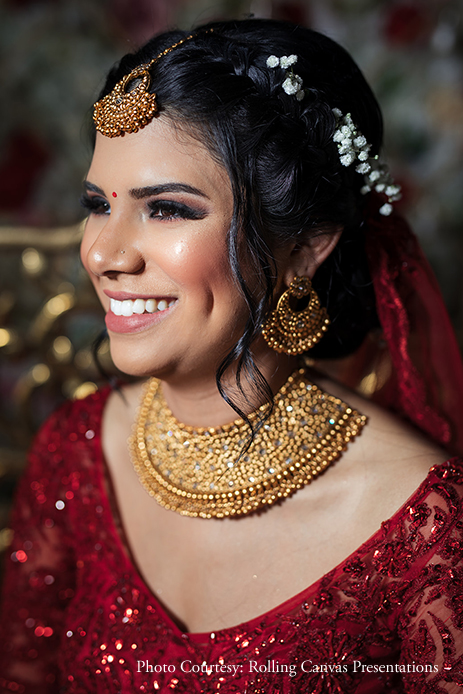 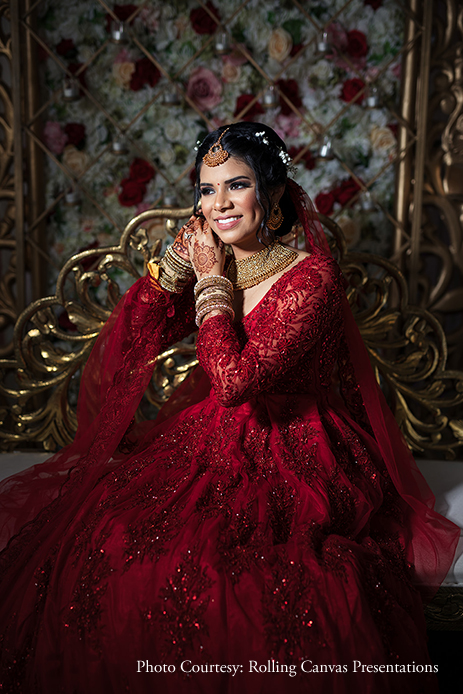 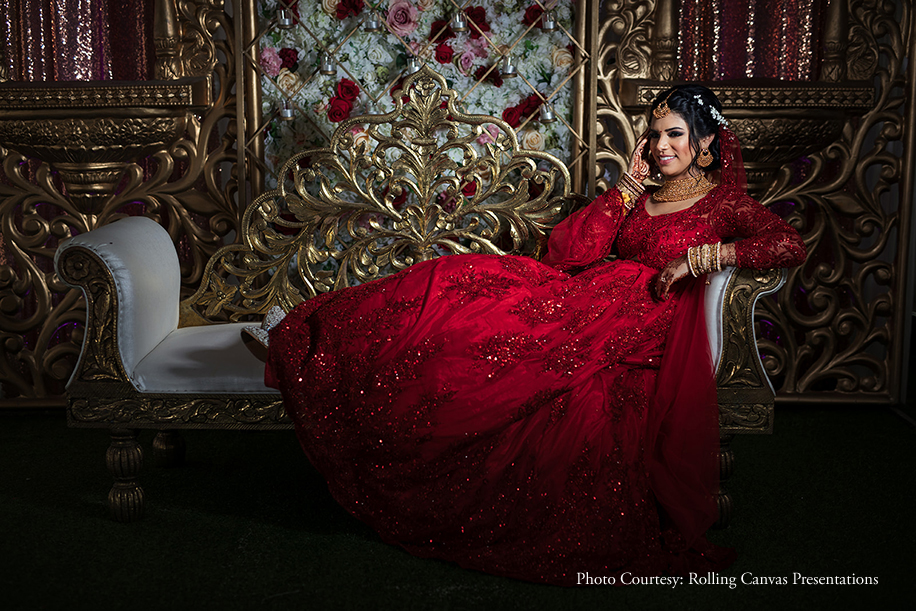 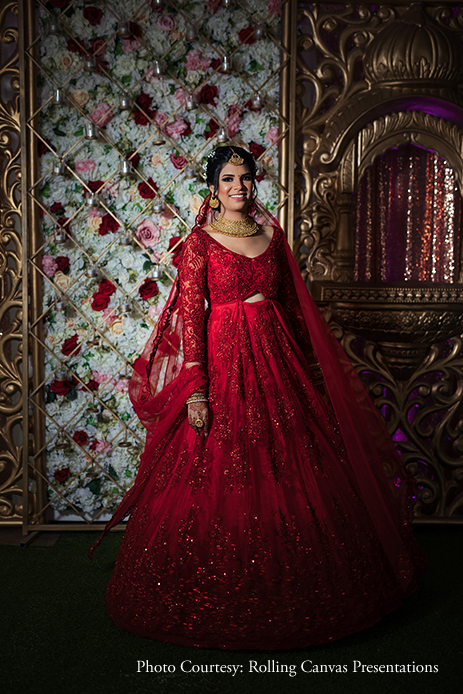 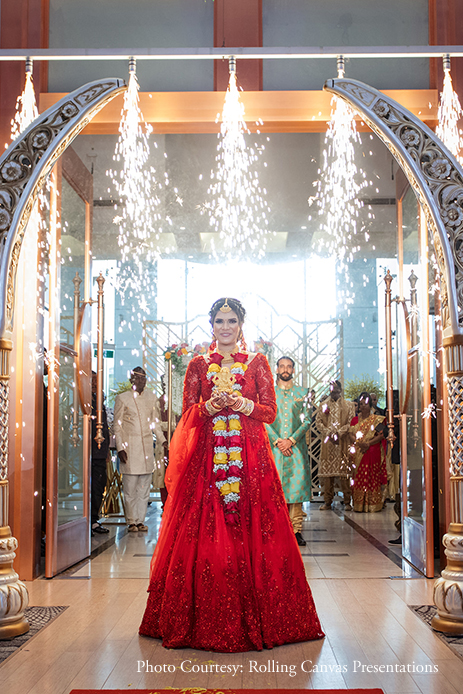 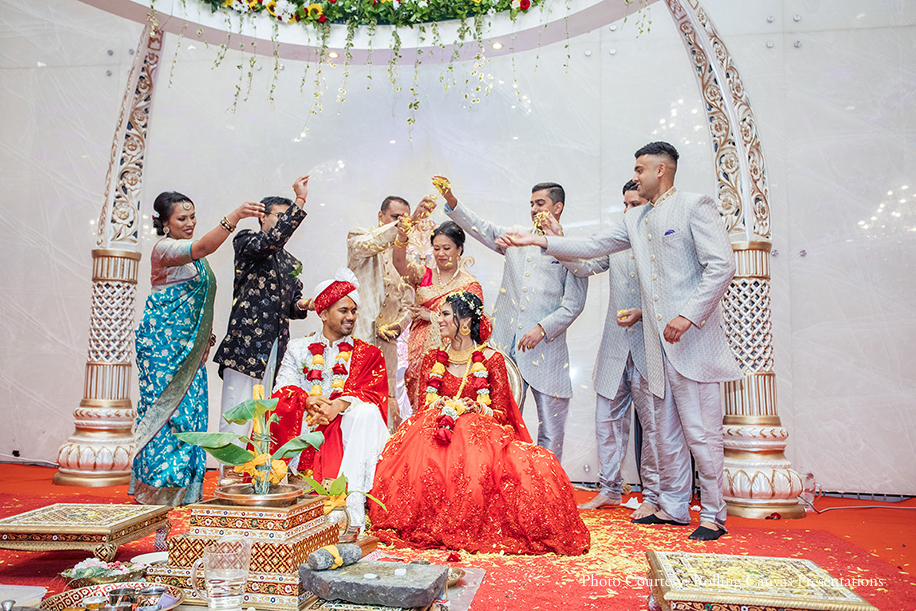 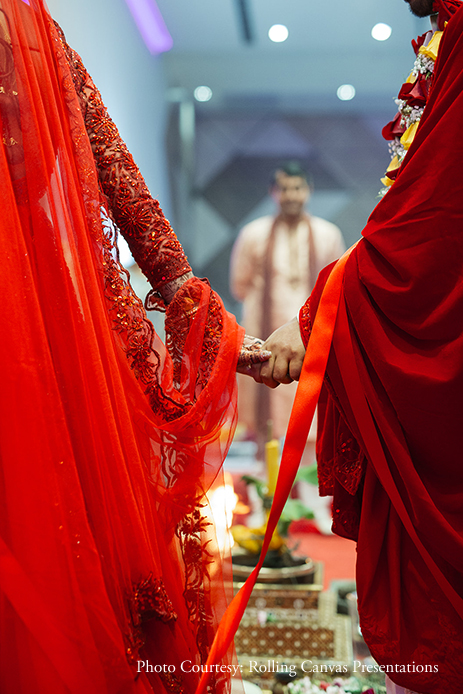 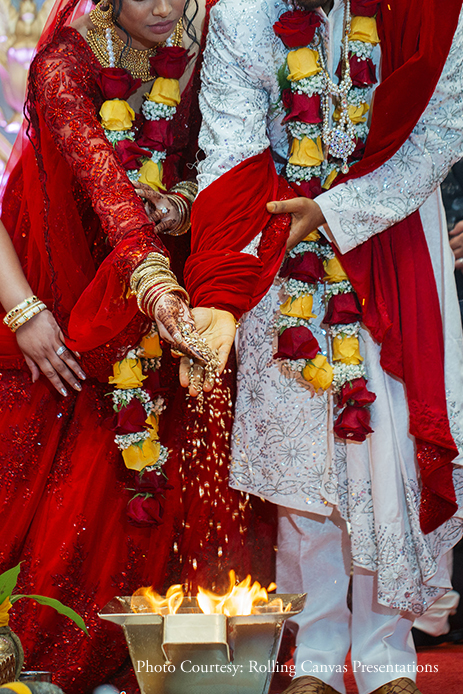 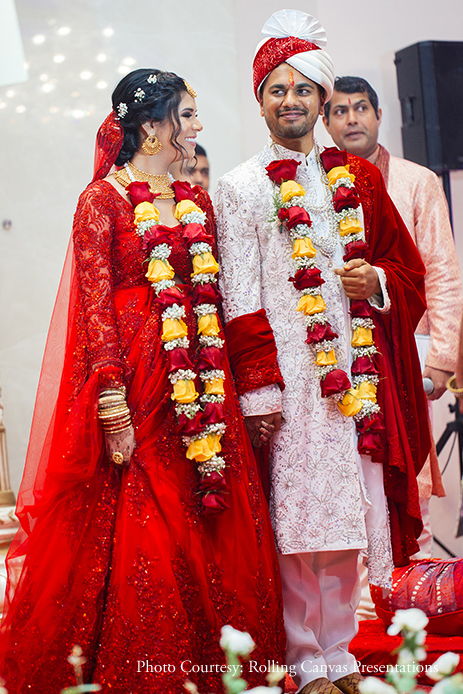 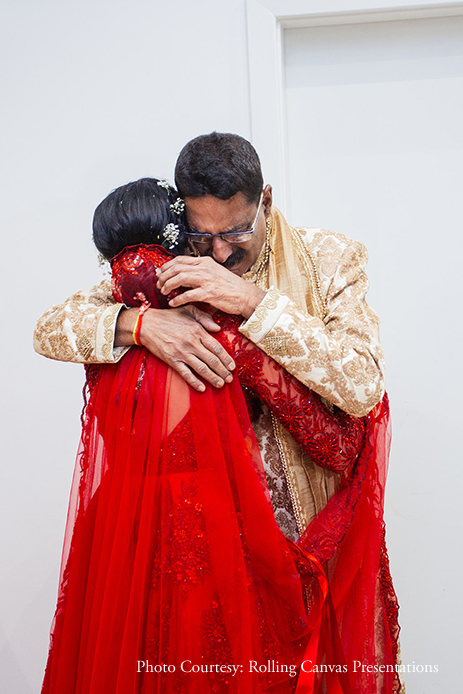 Reception Night
Hosted at the majestic and serene Curzon Hall, the couple’s reception followed an ‘English royalty’ theme with a distinct western vibe. Minimal décor and cold pyros completed the look. The newlyweds cut a stunning multi-tiered wedding cake, and the event was full of joy and exuberance as everyone cheered for the couple.

Glowing in an off-shoulder white gown, Diviyashni was all smiles as she made a smashing entrance with Rajneil who sported a light grey suit. 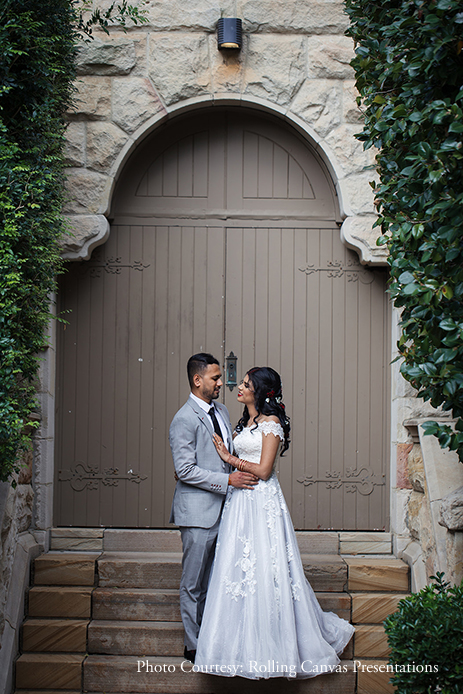 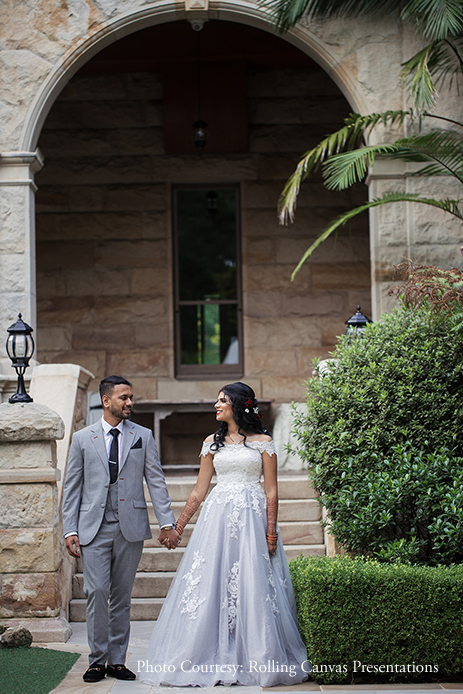 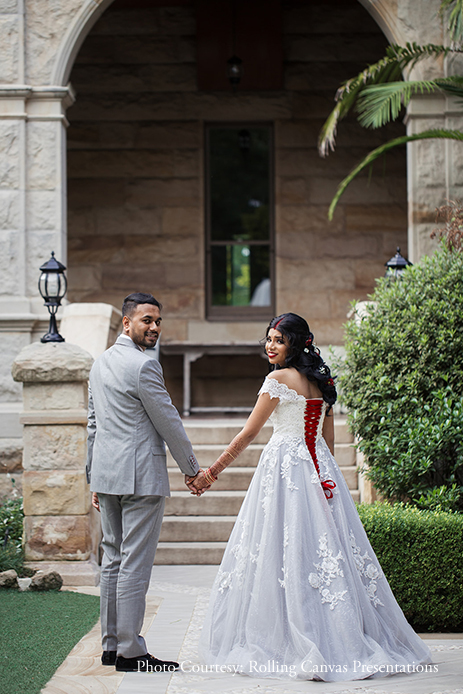 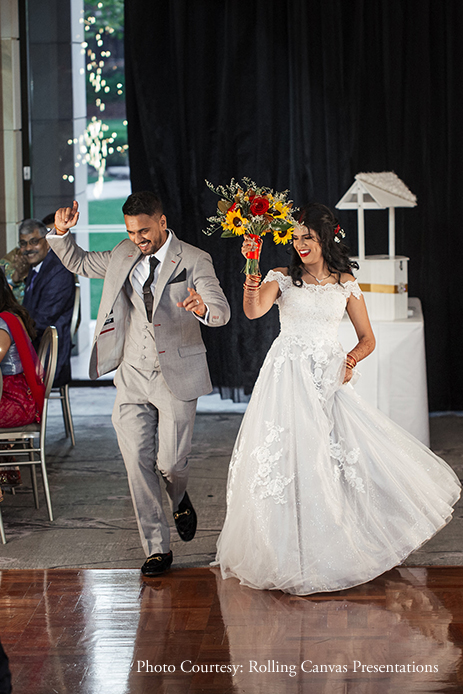 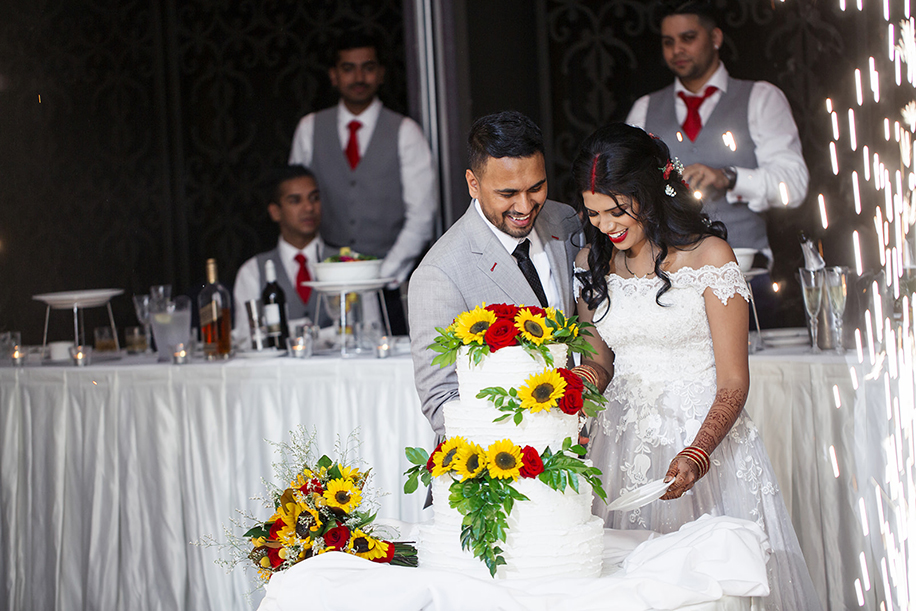 Advice For Couples
The bride advises, “Rajneil and I planned our wedding tirelessly for over one and a half years and I believe that this was the best decision we made. It allowed us to prepare ourselves, choose the right vendors, and make decisions calmly that excluded any last-minute frenzy.”