Tarana and Yagnesh hosted their mehendi and sangeet at a Desert Safari Camp in Dubai where Bollywood dancers and traditional Arabic performers cast a spell on the guests.
Planned to perfection and designed to impress, Tarana and Yagnesh pulled off spectacular wedding celebrations in Jumeirah properties in Dubai that included some interesting elements. 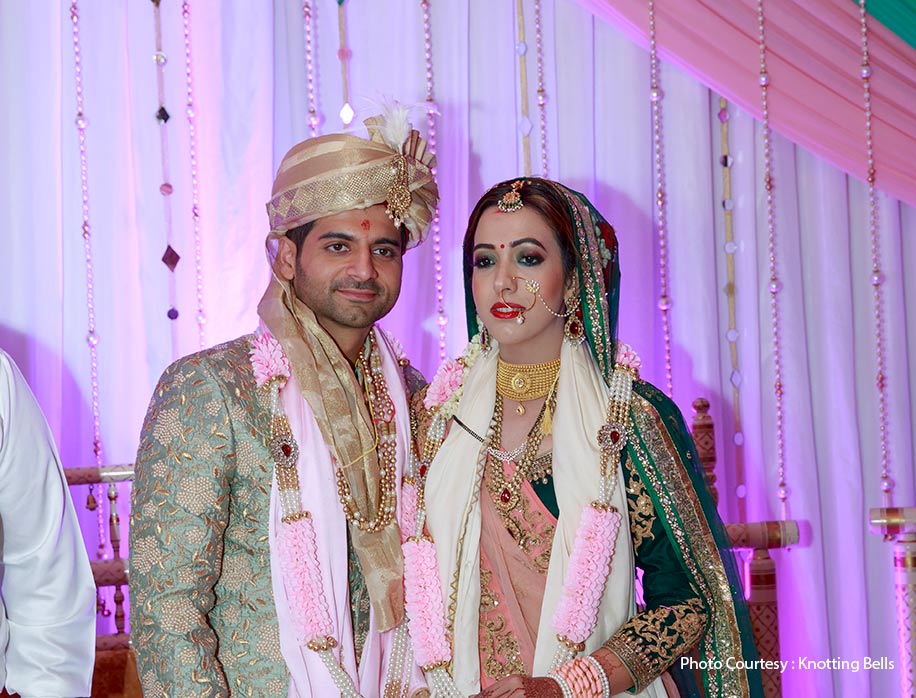 How We Met
“I’m based out of both the cities – Mumbai and Dubai. When I was visiting Dubai in 2016, a friend of mine asked me if I wanted to join her for clubbing. I was not really in the mood, but since she mentioned Bollywood, I gave in easily since I love Bollywood music! When we were entering the club, my friend mentioned that we would be sharing a table with her friends and that it was one her friend’s birthday. Once we reached, I met Yagnesh, the one who was celebrating his birthday! That was the first time we met and we hit it off quite well. He dropped me home after the party and asked for my number. We started talking regularly and figured that we were on a similar wavelength in terms of life.”

Proposal
“We took a trip to Seychelles last year and were staying at Le Meridien Fisherman’s Cove. Yagnesh had secretly planned the entire proposal. One night, he surprised me with a romantic candle-light dinner with a three-course meal and champagne beautifully arranged on the pier overlooking the sea. We didn’t really do the traditional proposal where he went down on his knee but there was a ring and it was one of the most memorable moments for us!”

Wedding Venue
“For the preliminary ceremonies, we chose Majestic Hotel Tower Dubai to begin the festivities. Jumeirah Creekside Hotel had a beautiful outdoor space but since it was too warm around that time, we decided to have the wedding ceremony indoors. For the reception, we chose the Godolphin Ballroom at Jumeirah Emirates Towers.”

Mata Ki Chowki, Roka and Sagri
“This function took place at Majestic Hotel Tower Dubai. It was a traditional Sindhi function in which lada’s (songs) were sung to bless the couple, followed by the ‘sagri’ ceremony where the groom’s family adorns the bride with floral jewellery, and finally the ‘Pakki Misri’ which is the ‘roka’ wherein the rings are exchanged and the families give gifts to each other!” 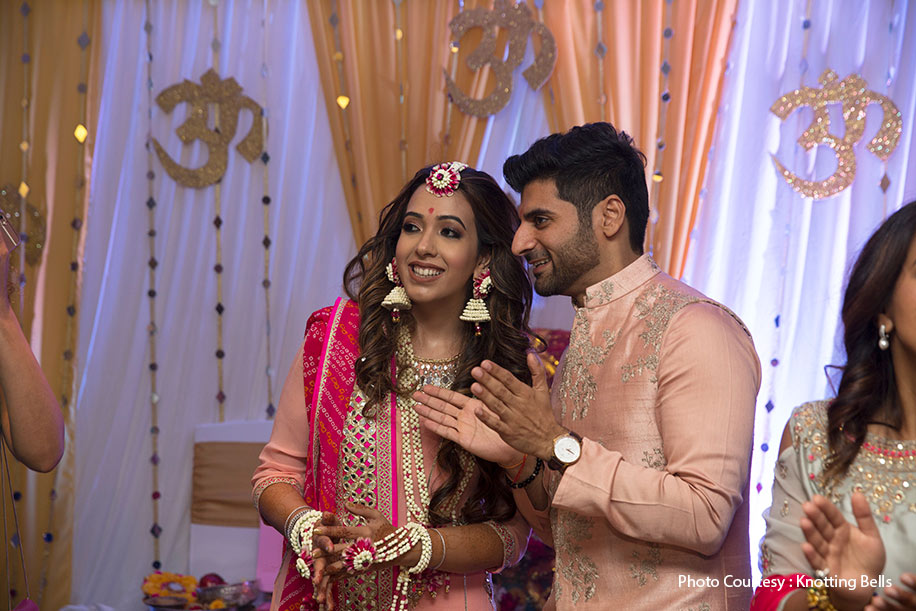 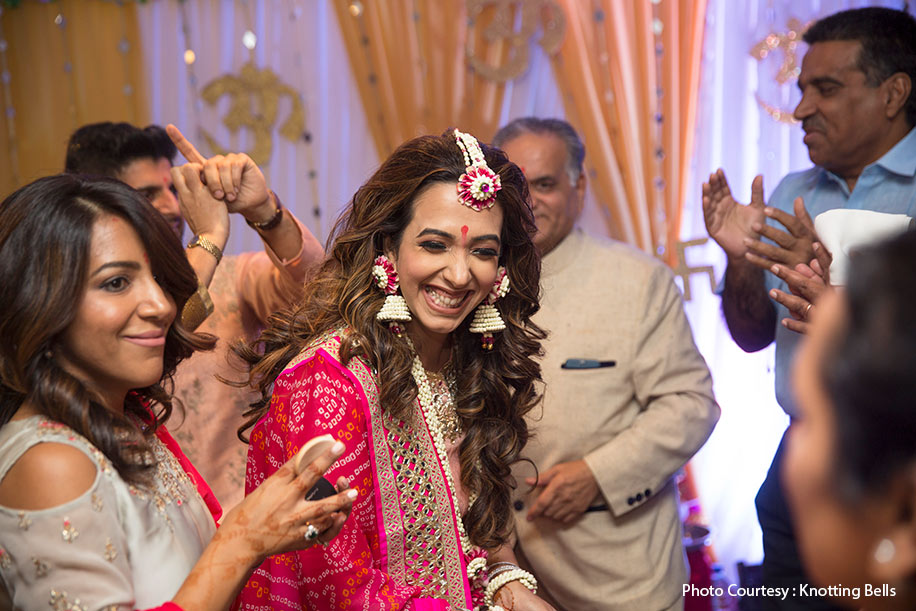 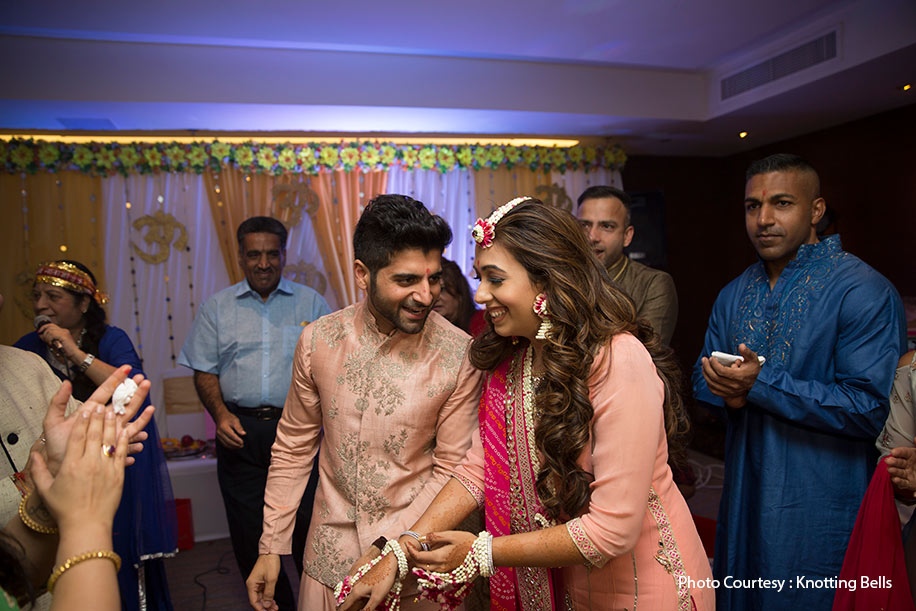 Mehndi and Sangeet
“We felt that since most of our family and friends were coming to Dubai from all across the globe, they should be treated to something unique. So, instead of doing a cliched mehndi and sangeet, we decided to give these dual events a Dubai twist by hosting them in an authentic Desert Safari Camp in the middle of the desert. The event included all the famous local entertainment options like camel rides, belly dancing, fire show and a Tanoura show. We added a desi touch by having a troop of local Bollywood dancers perform that evening.”

Tarana wore a gorgeous blue ensemble by Arpita Mehta for this function. 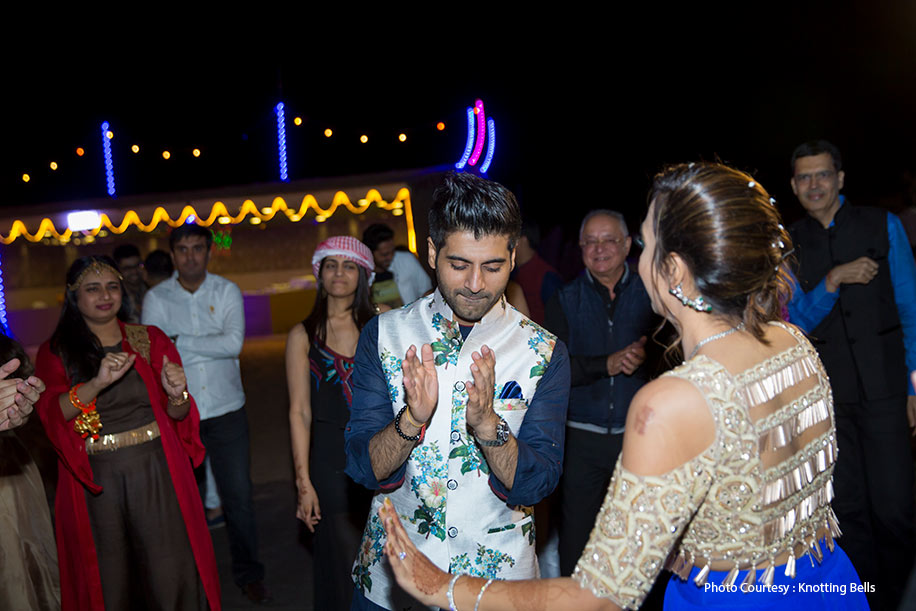 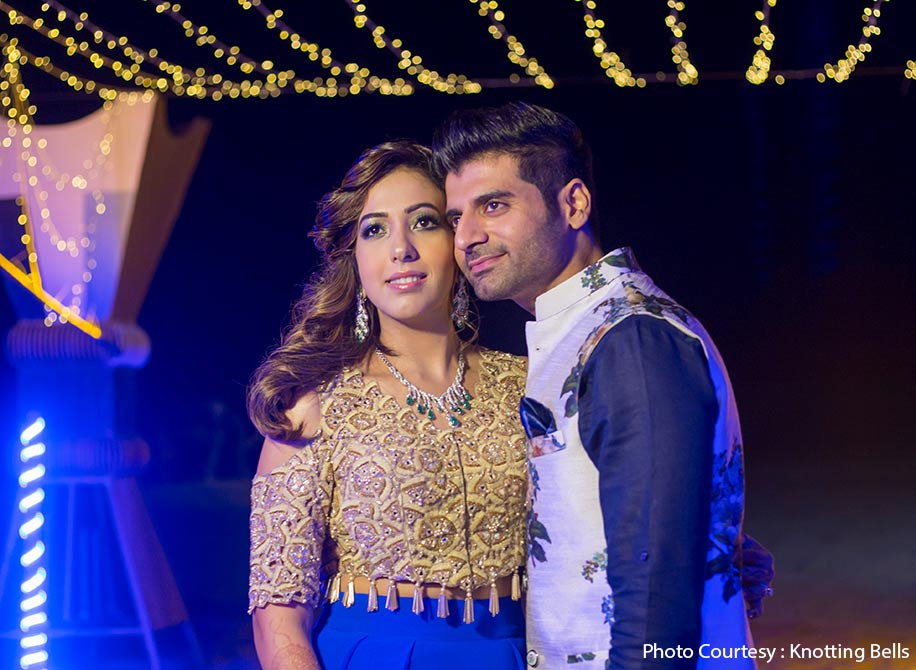 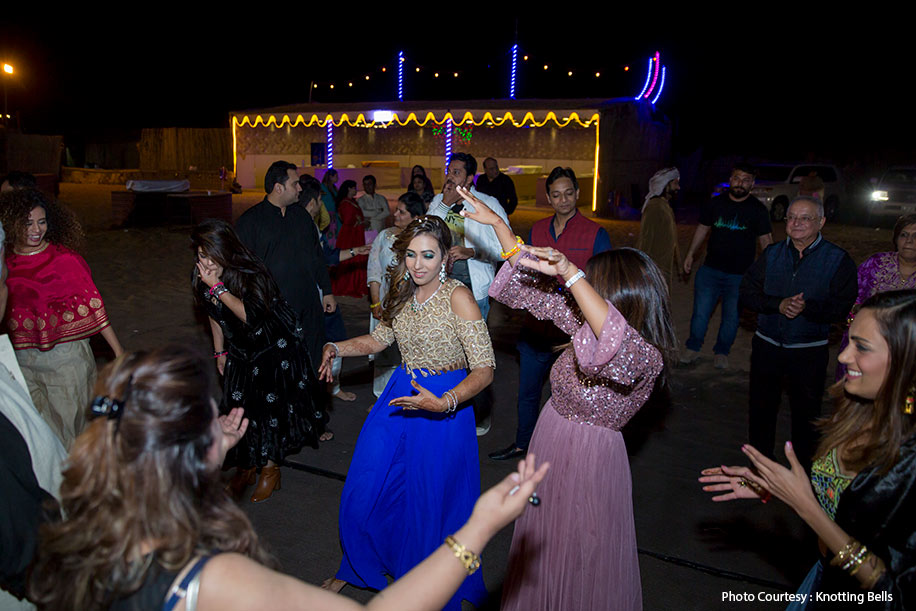 Pheras
“The wedding ceremony took place at Jumeirah Creekside Hotel which was filled with a proper ‘band baaja’ (wedding orchestra) scene for Yagnesh along with the ‘joota chori’ (stealing the groom’s shoes) fiasco that seemed like something right out of a Bollywood movie. My bridal entry under a ‘kaleere chaddar’ (floral canopy) was a highlight for sure! The theme for this function was fairytale-esque with a salmon pink and mint green color scheme along with chariots as the table centerpieces and a chandelier in the mandap.”

Tarana looked like a princess in her green Vikram Phadnis ensemble while Yagnesh wore a sherwani from Telon. 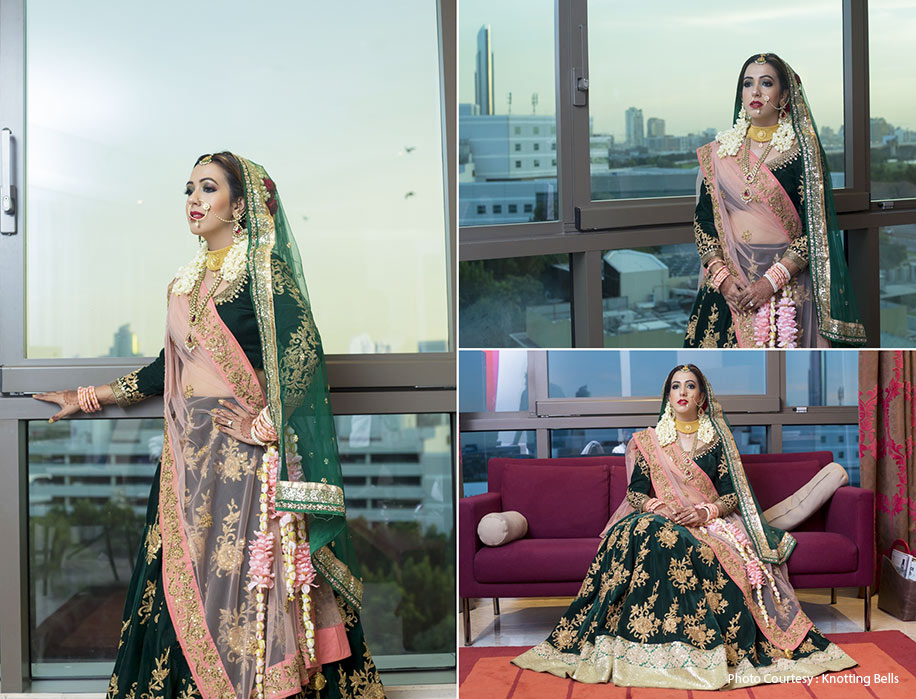 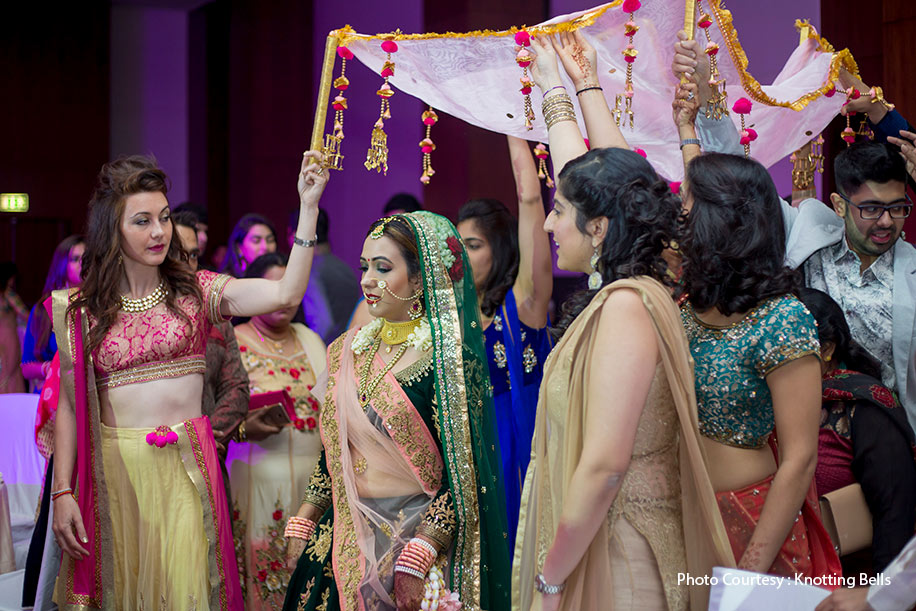 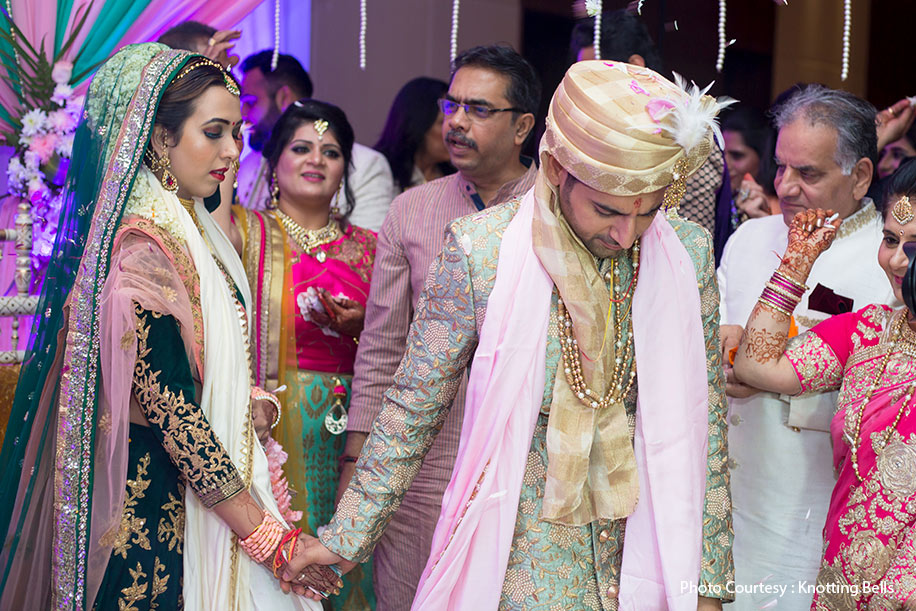 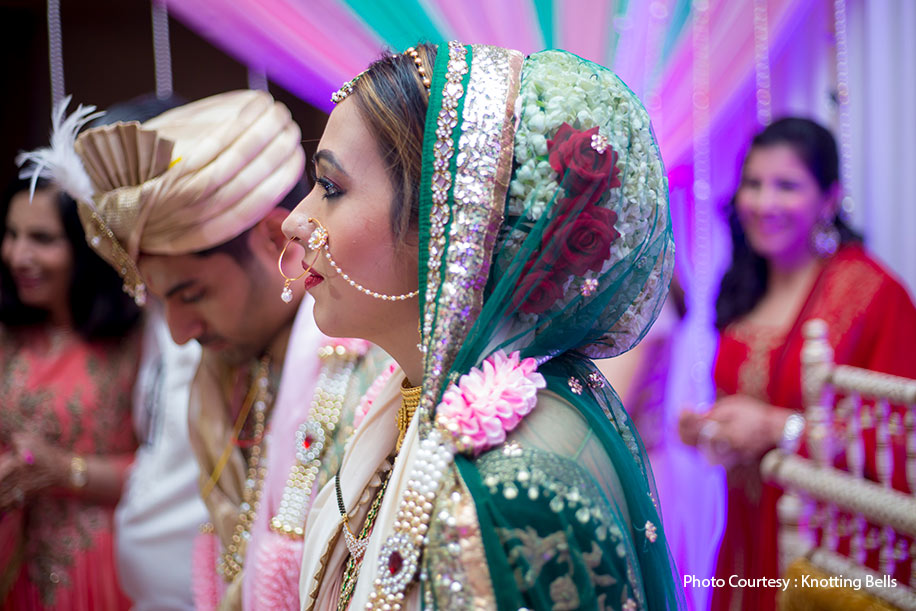 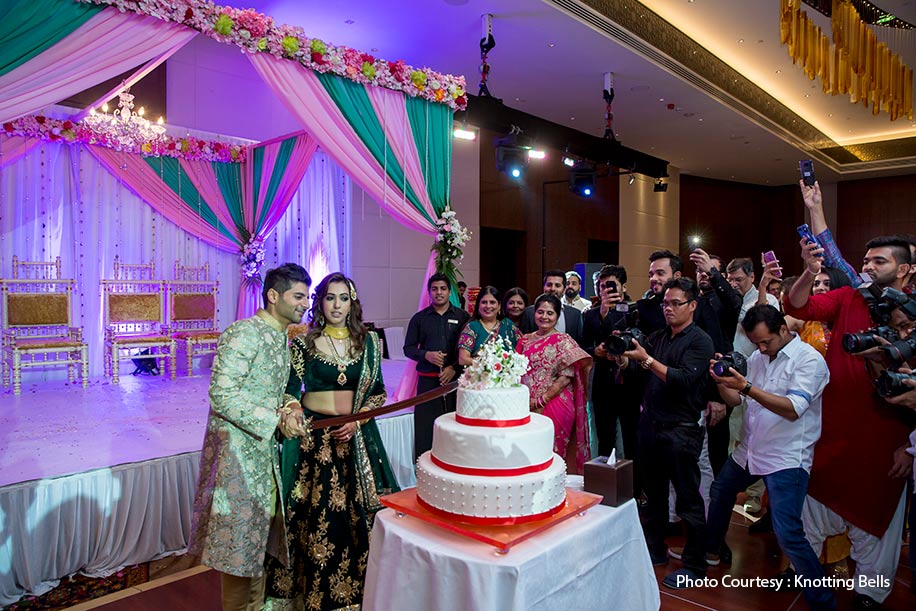 Reception
“This was our grand finale and we didn’t want an uptight stage reception, so there was no stage but only a sweetheart table. From the entertainment to the decor, everything was planned in a way that the night was one that people would enjoy till the last minute sans any formality!”

Tarana opted for a daring gold and maroon Gaurav Gupta gown, while Yagnesh looked dapper in a suit from Royal Fashion. 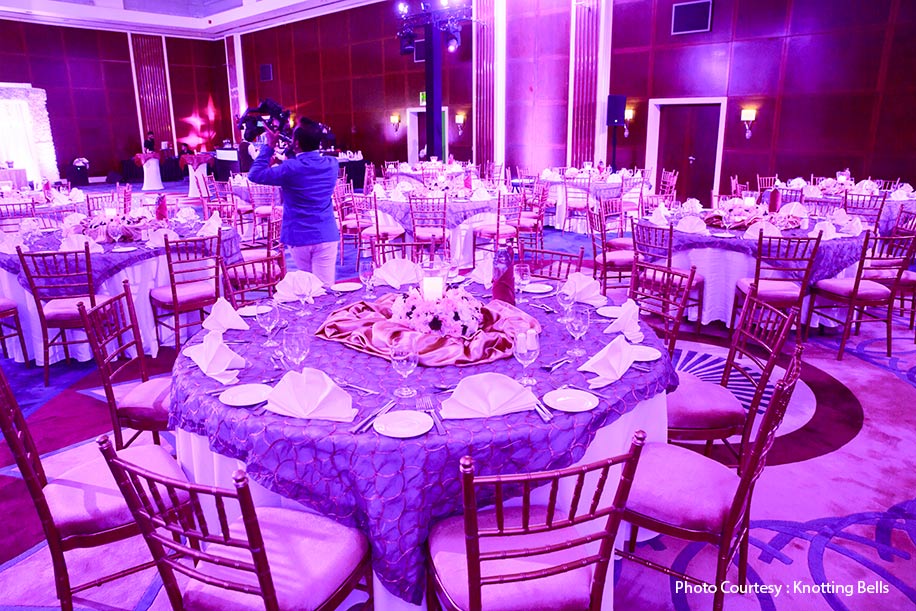 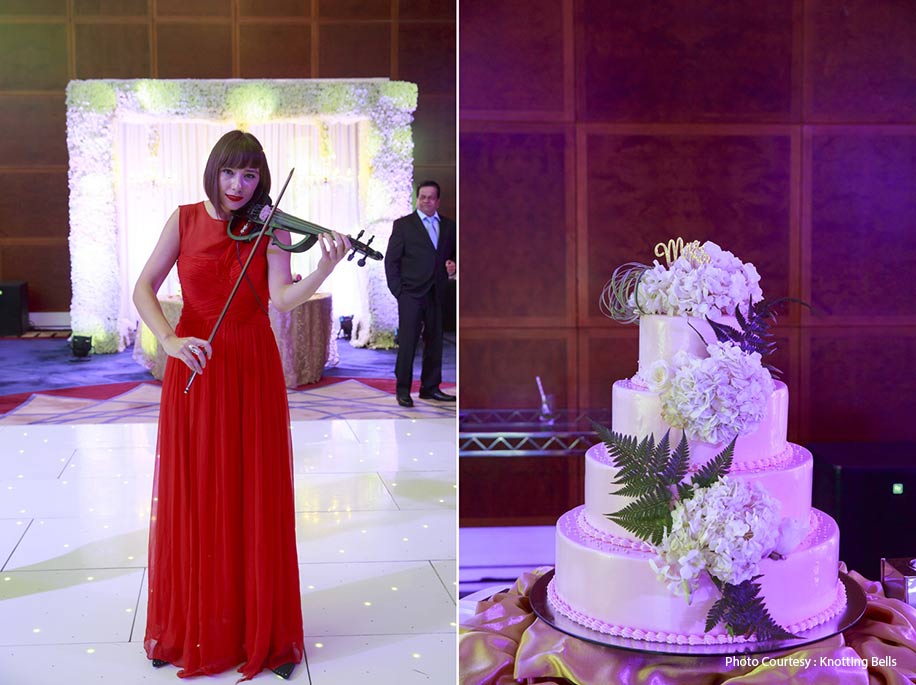 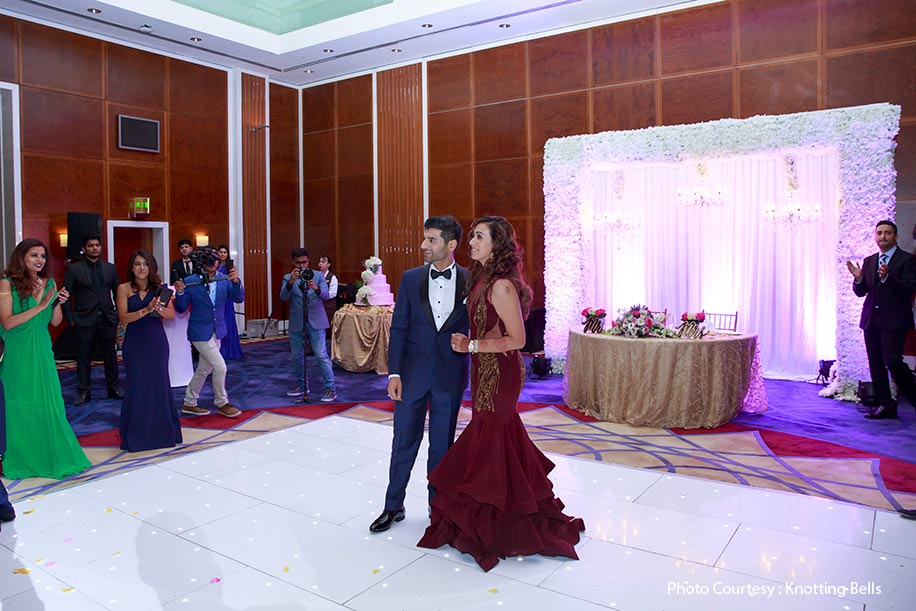 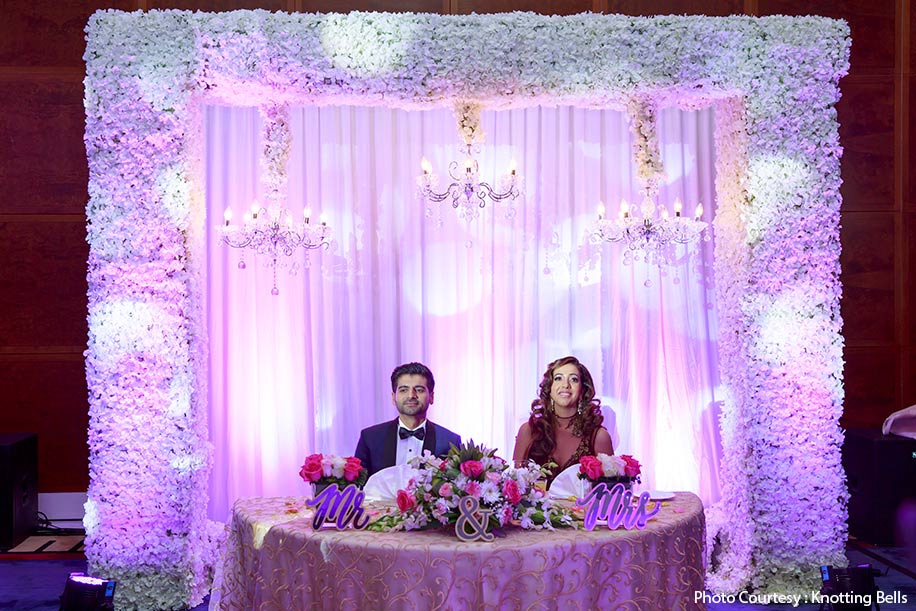 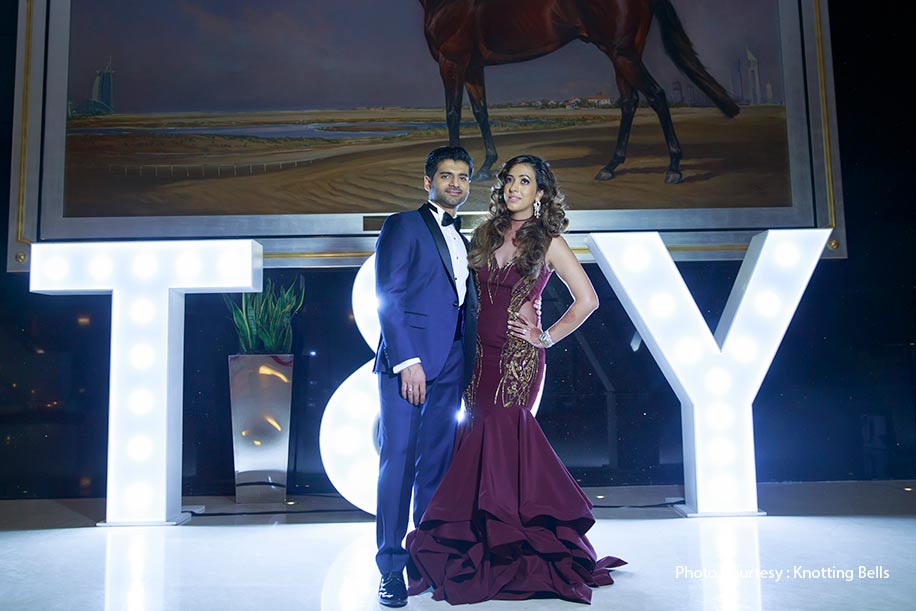