This edgy star and bonafide fashionista impressed all with her haute yet homely wedding in Mumbai as well as her traditional bridal ensembles.

The wedding of Bollywood actress Sonam Kapoor to businessman Anand Ahuja was a starry affair as they wed on May 5, 2018, after dating for five years.

Her fans in India and abroad celebrated Sonam Kapoor’s cozy and classy wedding to Anand Ahuja as photos of the celebrations in Mumbai flooded various news channels and social media platforms.

Sonam’s wedding festivities kicked off with a ‘Mehndi lagaai’ party and a ‘Mehndi / Sangeet’ bash. For the Mehndi lagaai’ function, Sonam picked a lilac, peach and white ensemble designed by Anuradha Vakil. Anand matched her look in his long onion pink jacket and white trousers. She was styled by her sister Rhea Kapoor. 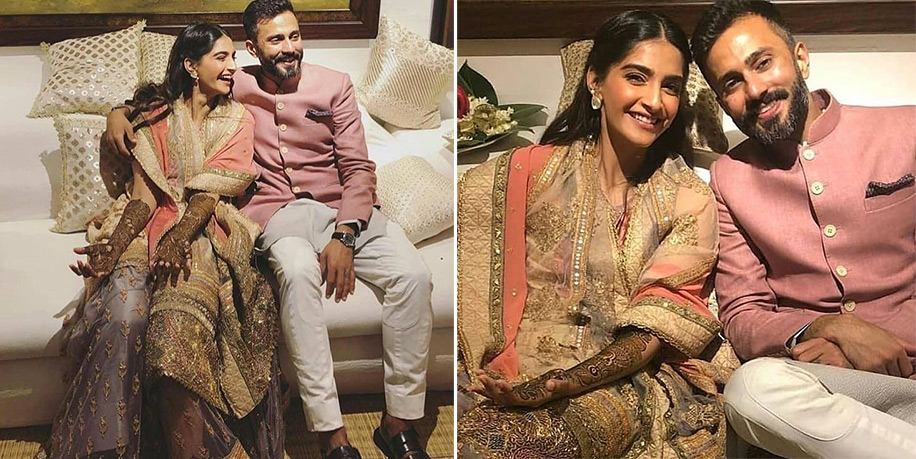 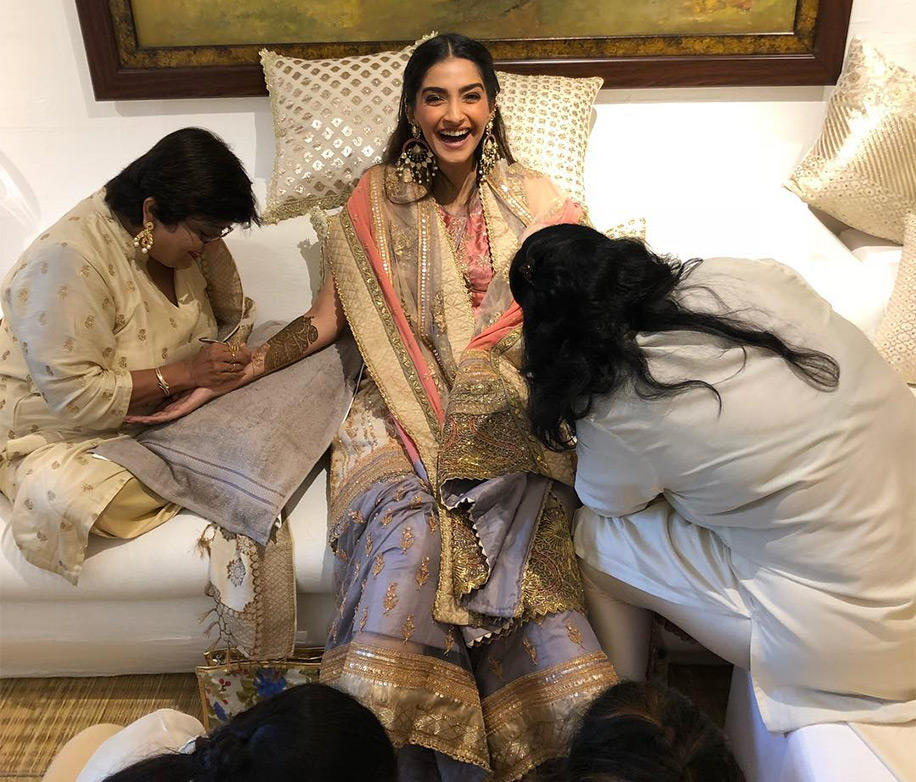 For the ‘Mehndi / Sangeet,’ Sonam donned a beautiful ivory chikankari lehenga designed by Abu Jani Sandeep Khosla that fused gold and white elements beautifully. She wore her hair in a loose braid and accessorised it with a jasmine garland fixed in a criss-cross style all along the length of the braid. Her magnificent neckpiece, white and gold dangling earrings and ‘maang tikka’ (forehead ornament) exuded traditional elegance. Her makeup for this event was kept natural with just a touch of blush, light smoky eyes and pink lips. 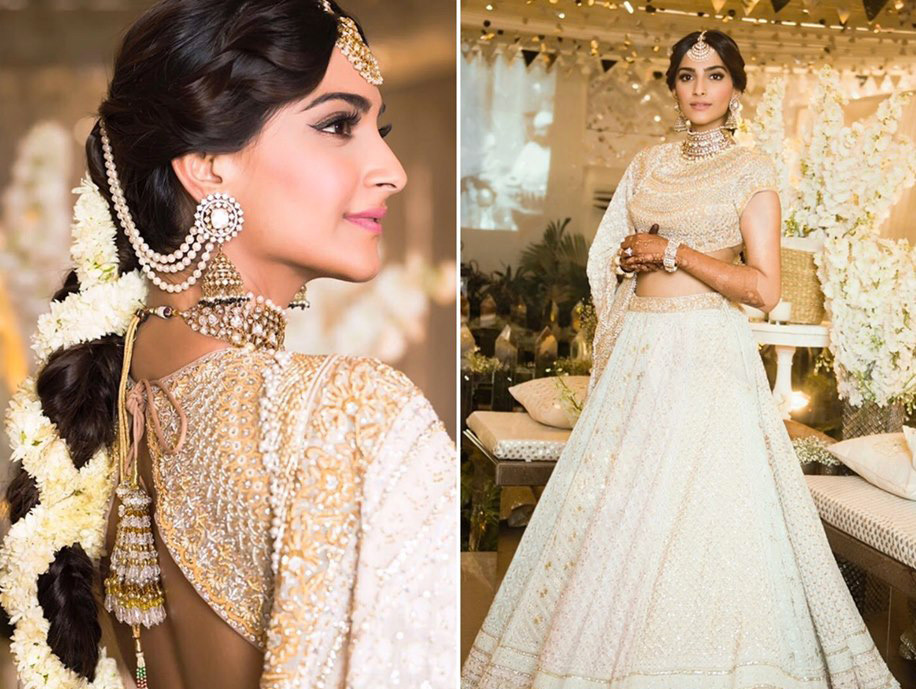 For the wedding, Sonam opted to wear traditional red and picked a lehenga by Anuradha Vakil. The skirt was resplendent with lotus motifs and included a dupatta with a thick embellished border. Her jewellery for this auspicious function included an ornate multi-layered ‘matha patti’ (head ornament), a gold choker alongside a longer exquisitely crafted neckpiece, hand ornaments and a set of red ‘choodas’ (Punjabi bridal bangles). Her makeup look was once again all about youthful freshness, and Sonam eschewed the heavy, glamorous look and opted for dewy skin, pink lips, light blush and light eye makeup. 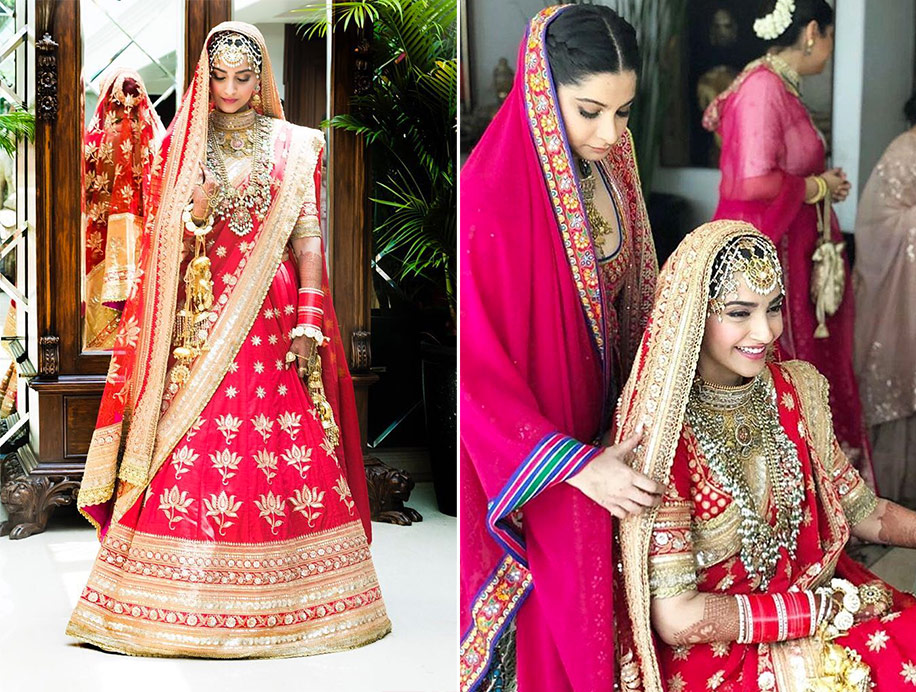 For the reception, Sonam pushed the fashion envelope in an edgy white and grey Anamika Khanna ensemble that was modern and comfortable. Paired with a white dupatta that had a lovely golden border, the lehenga was an unusual choice because of the understated color combination, but Sonam made it work wonderfully. She wore her hair sleek and straight with a middle parting, and amped up the glamour quotient with bright red lips. Later that night, she changed into a breezy white chikankari kaftan dress by Abu Jani Sandeep Khosla, and repeated the accessories of the earlier function. 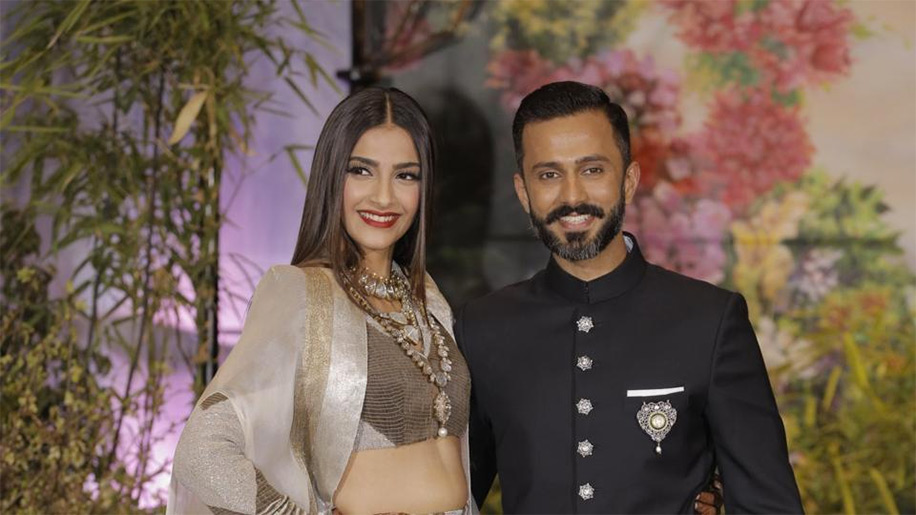 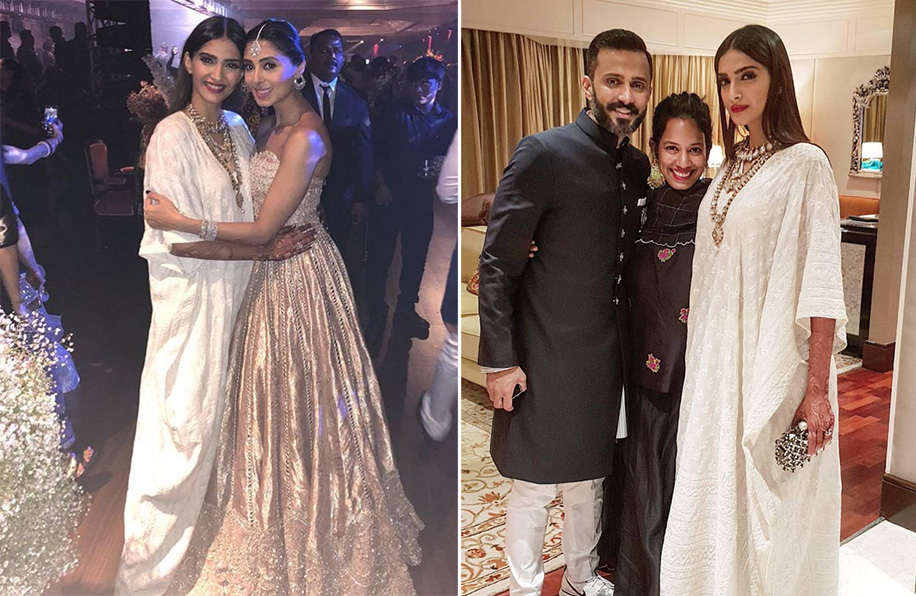