Sonam Kapoor’s Reception Was An Affair Fitting For A Fashionista

After a beautiful wedding, Sonam Kapoor threw a glitzy after-party for her loved ones and industry colleagues. By looking at the photos and video of everyone dancing the night away, we know for sure that the function was a massive success. Here’s who wore what at the celebrity’s grand reception which was nothing less than a red carpet event.

After acing the traditional bride look, Sonam embraced a contemporary avatar with a graphic Anamika Khanna lehenga. The grey chevron print skirt was paired with a blouse and an ivory cape that featured a golden border and cascaded down to add a romantic touch to the otherwise clean silhouette.

The dapper Anand Ahuja complemented his bride’s look by choosing to wear a black bandhgala achkan complete with striking buttons. He brought a twist to his look by pairing his attire with white Nike sneakers. 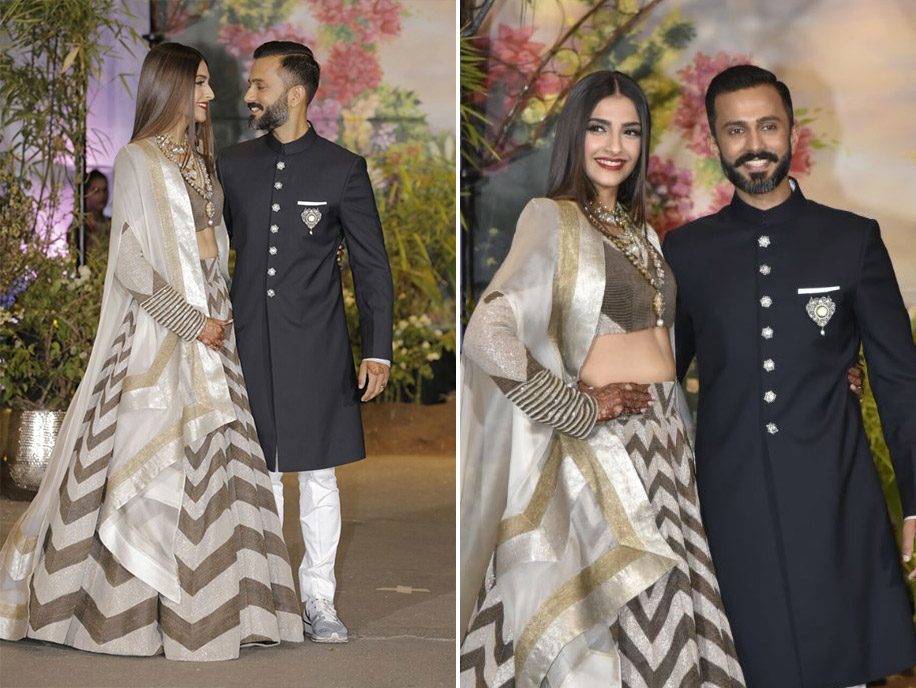 Sanjay Kapoor and Imran Khan made an appearance in classic black. While Sonam’s uncle opted for a bandhgala by Raghavendra Rathod, her I Hate Luv Storys costar wore a tailored suit and a bowtie. 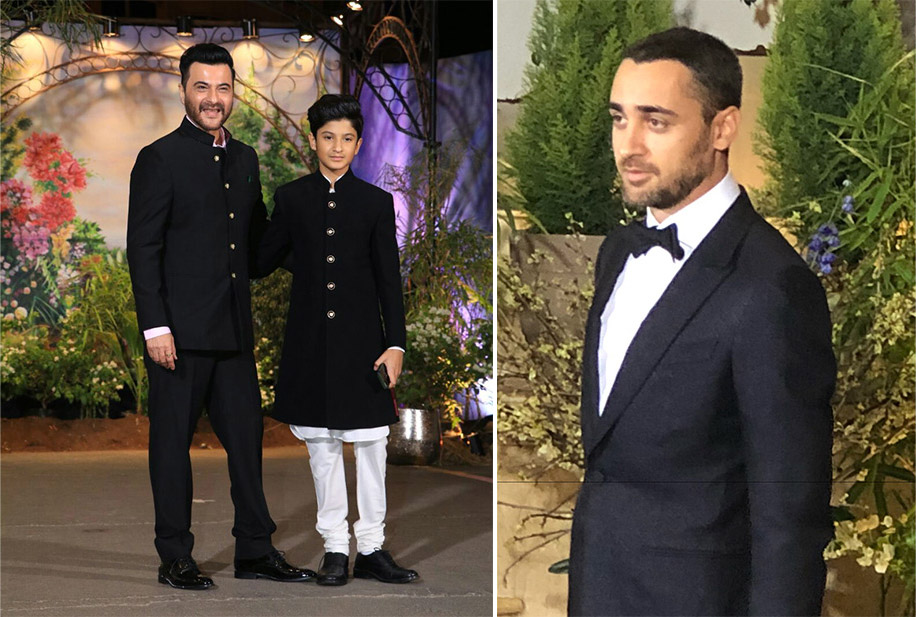 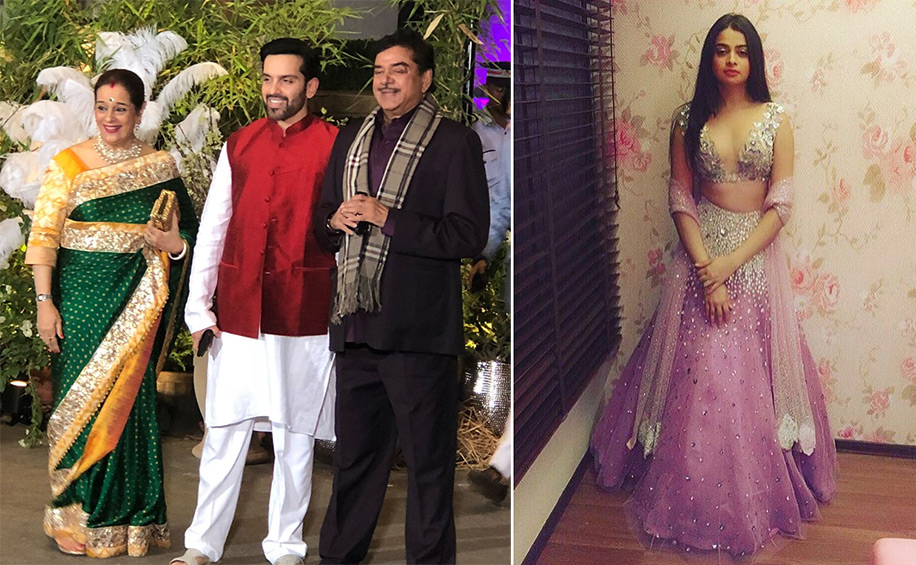 Fashion photographer Atul Kasbekar was seen on the other side of the lens wearing a grey suit. Jacqueline Fernandez wore a white net saree that featured complex embroidery and was paired with a heavy blouse in the same colour. 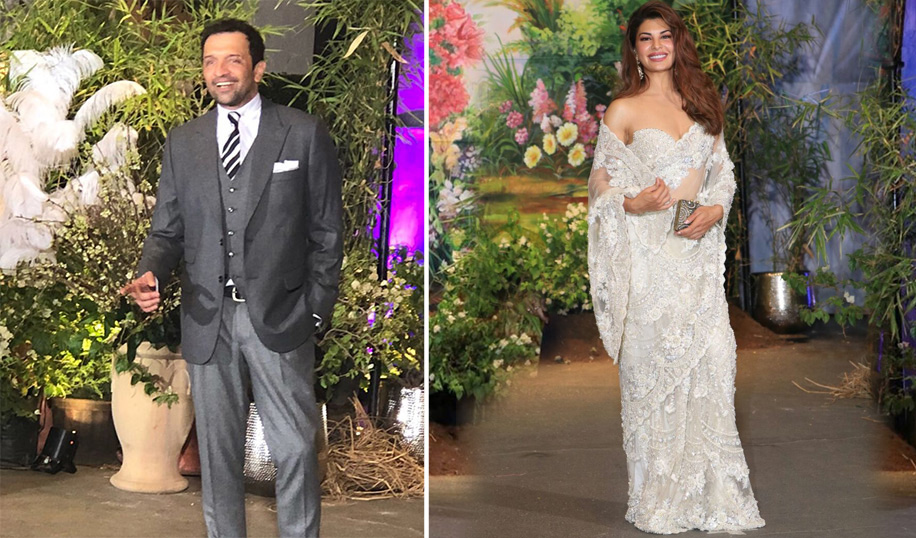 Black seemed to be the color of the night with Anil Kapoor, Kunal Rawal, and Arpita Mehta dressed in this timeless hue. 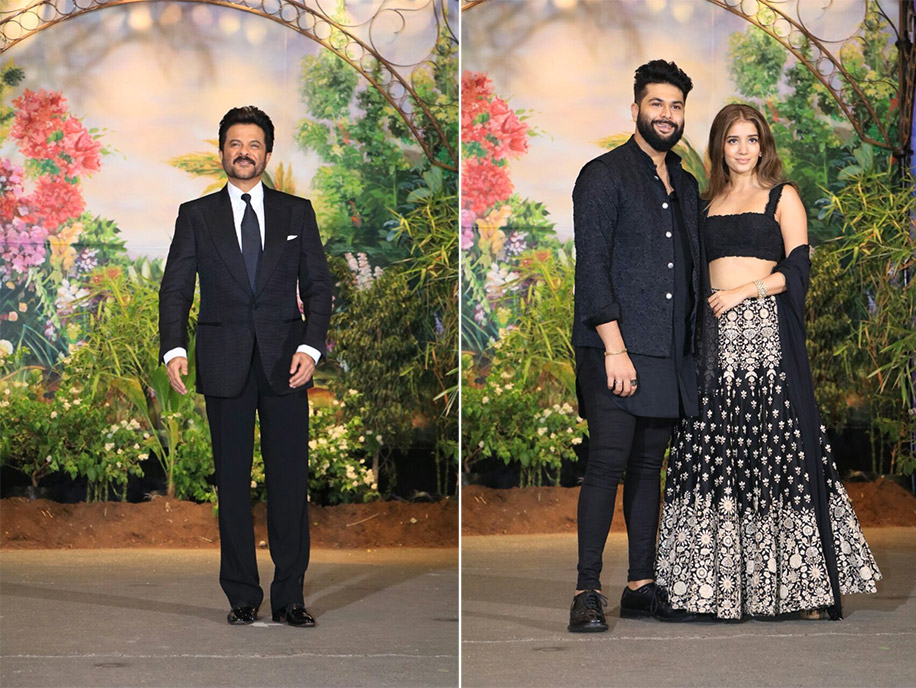 Masaba decided to drape a quirky black saree from her own label. Swara Bhaskar picked for herself a lehenga by Abu Jani Sandeep Khosla that was paired with a frilly sleeved crop top. A chip off the old block Harshvarshan Kapoor dressed up in a black suit. Kareena Kapoor looked ravishing in a heavily embellished Manish Malhotra lehenga. 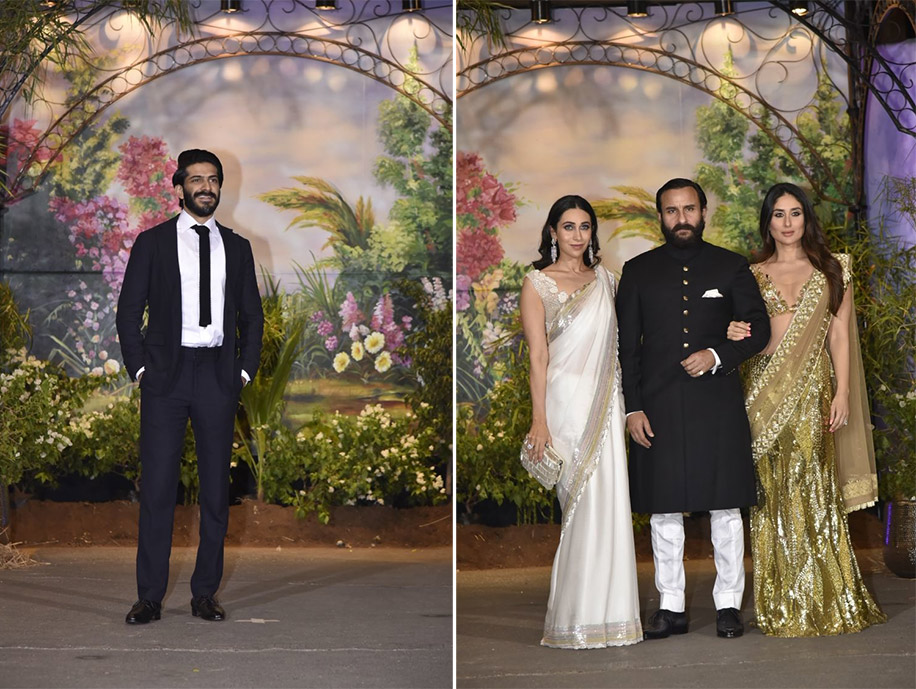 Maheep Kapoor and Shanaya Kapoor dressed in summery lights by Abu Jani Sandeep Khosla. Kangana Ranaut looked every bit a queen in the gorgeous saree gifted to her by her sister. 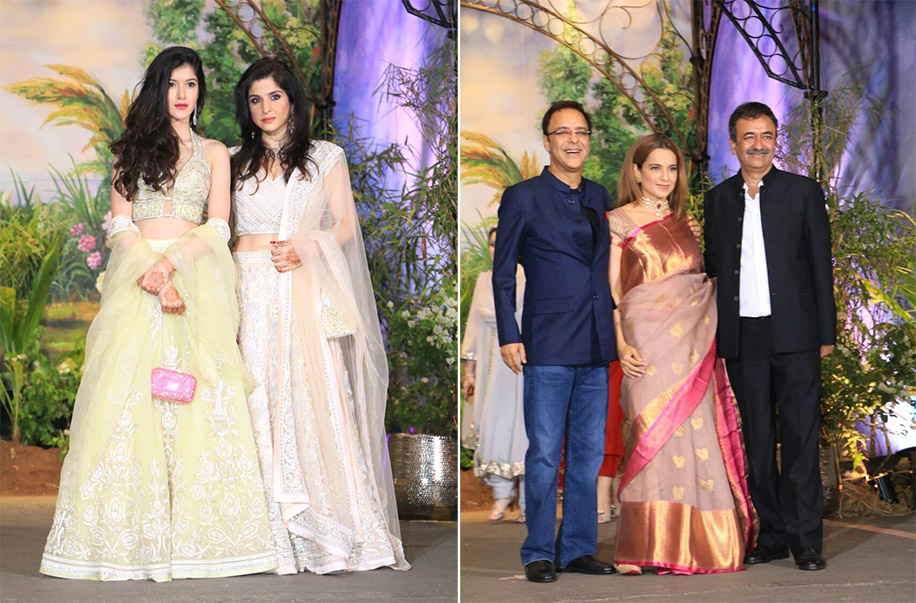 Jackie Shroff and Ayesha Shroff coordinated their colors as he opted for a black and white suit while she dressed up in a stunning white ensemble. Udhav Thackeray and Rashmi Thackeray, too, matched their grey outfits. Anaita Shroff Adajania was a vision in white as she wore a saree with tone on tone work. Karan Johar’s black achkan covered in golden floral motifs by Abu Jani Sandeep Khosla was a statement maker. Ex-Miss India Juhi Chawla posed for paparazzi in a baby pink creation by Sabyasachi. Javed Akhtar wore a blue kurta with a Nehru jacket with details on the neck and sleeves. 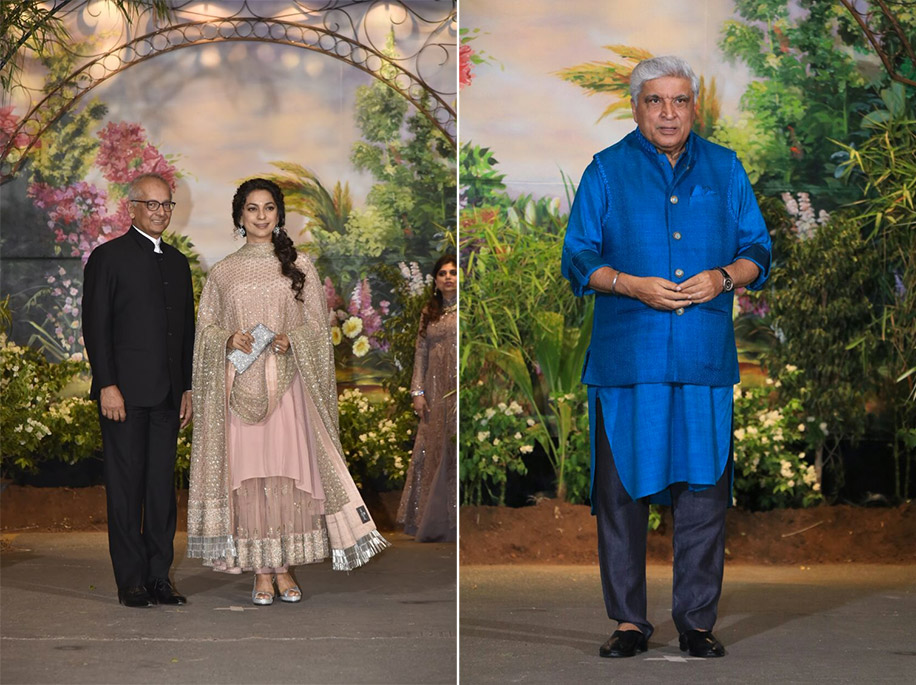 Boney Kapoor wore monochromatic layers in midnight blue. He paired a kurta with a self-designed Nehru jacket and a stole with a golden border. Madhuri Dixit let Bollywood’s favorite designer, Manish Malhotra, design her pale pink outfit for the night. 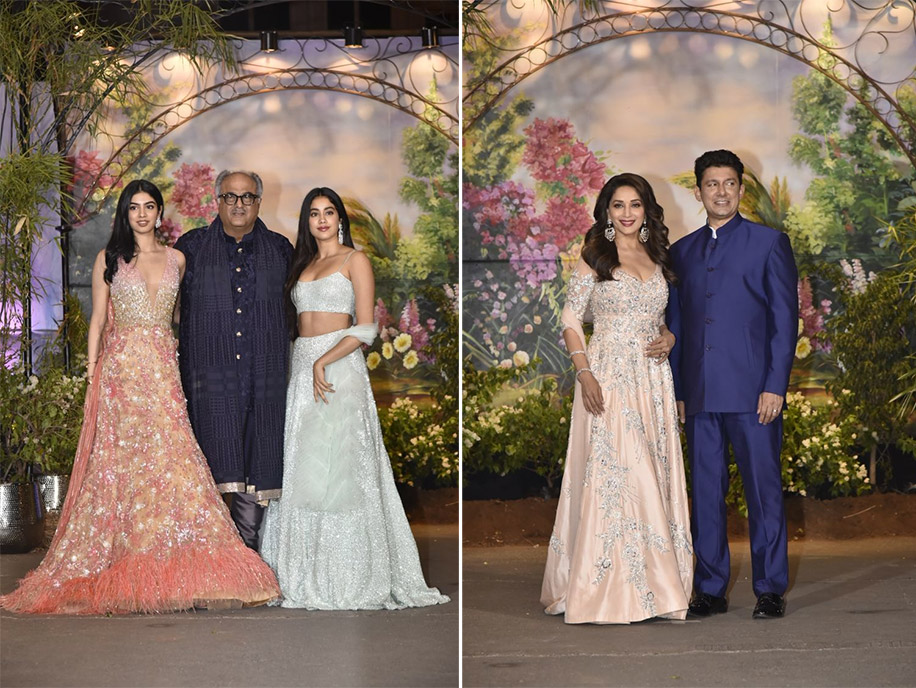 Kajol draped a grey saree with sequins details and posed with the designer of her outfit. The iconic Bollywood couple Rishi Kapoor and Neetu Singh were stunning in their respective black and golden suit. Divya Khosla Kumar was seen in a traditional looking lehenga by Anju Modi while Antara Motiwala opted for a modern looking outfit that she paired with an elaborate dupatta in white. Rani Mukherji, once again, wore a lehenga by Sabyasachi, only this time, she was a stunner in golden. Shahid Kapoor attended the celebration in an asymmetrical grey kurta while Mira Rajput was stylish in a black and white Indo-Western outfit. Student of The Year co-stars Siddharth Malhotra and Varun Dhawan seemed to be hooked on to the layered achkan trend. While Siddharth opted for a black outfit by Shantanu & Nikhil with a printed layer peeping out, Varun played with powder blue and white. Kirron Kher opted a solid color orange saree while Arjun Kapoor was handsome in a black achkan that he wore over a purple kurta. Both, Shilpa Shetty and Rekha came dressed in an interestingly draped Indo-Wested outfit. While Rekha stuck to her signature Kanjevaram which she wore over skin fitted pant, Shilpa Shetty looked lovely in a pale blue outfit by Tarun Tahiliani. A pink lehenga by Lahore based couturier Faraz Manan was Pernia Qureshi’s outfit for the night. Sisters Janhvi Kapoor and Khushi Kapoor were seen in creations by Manish Malhotra. Sonam’s co-star from her latest film Veere Di Wedding, Shikha Talsania, brought with her a cheery vibe by opting for a bright yellow Anarkali by Abu Jani Sandeep Khosla. Vidya Balan wore a timeless kanjevaram saree in white and gold. Tamara Ralph and Micheal Russo, graced Soman wedding, immaculately dressed in a black tuxedo and pink gown respectively. Akshay Kumar opted for a black bandhgala with buttons on the side while Twinkle Khanna opted for an intricately embroidered white chuddidar suit by Abu Jani Sandeep Khosla that she paired with lustrous emeralds. Ayushman Khurana wore a deep blue achkan that featured floral motifs while Karisma Kapoor spelled elegance in a white saree by Manish Malhotra with a golden and silver border. Ranveer Singh posed for the camera in a blue tuxedo. Shah Rukh Khan was seen in a black bandgala jacket with wife Gauri Khan who opted for a striking nude and black gown by Tarun Tahiliani. Alia Bhatt made her appearance in a lime green lehenga at the after party and Ranbir Kapoor stunned in a white outfit by Manish Malhotra. The newest member in the Ambani household, Shloka Mehta, opted for a creation by designer duo Abu Jani Sandeep Khosla. One of the world’s biggest business tycoons’, Mukesh Ambani was present at the event with wife Nita Ambani who looked gorgeous in a cream and white Abu Jani Sandeep Khosla ensemble. Shweta Nanda too was spotted wearing a pink creation by the same designers. Aishwarya Rai Bachchan went with an outstanding anarkali that was covered in delicate handwork while Abhishek Bachchan sported a white achkan. Both their outfits were created by Manish Malhotra. Athiya Shetty wore a white and gold lehenga by Rahul Mishra. This entry was posted on Wednesday, May 9th, 2018 at 4:22:32 pm and is filed under Celebrity News. You can follow any responses to this entry through the RSS 2.0 feed. Both comments and pings are currently closed.