6 Brides Who Aced at Personalising their Wedding Look

Every bride wants her personality to shine through when she makes her appearance. While the ‘wow’ factor in the final bridal ensemble is always greater than the sum of its individual details, there’s also the ‘aww’ factor – little touches, whether sentimental or quirky, that make her outfit unique to her.

Meet six brides who inspired us with their creativity in incorporating eye-catching flourishes and peekaboo secret features into their wedding attire.

1. Kresha Bajaj’s Tale Telling Lehenga
When fashion designer Kresha Bajaj designed her wedding lehenga with her love story embroidered on its 14 kalis, she hardly anticipated that her style would become the next big bridal trend! The story, perfectly rendered in zardosi and aari embroidery techniques had a mix of embellishments; saadi, nakshi, kardana, salli, tikki, zari, and pearls. The embroidery traced some of the most memorable milestones in her relationship; their proposal, a trip they took together and so on, embroidered on this timeless masterpiece. The bride has the lehenga on display now as a living memory and that is as personal as any outfit can get! 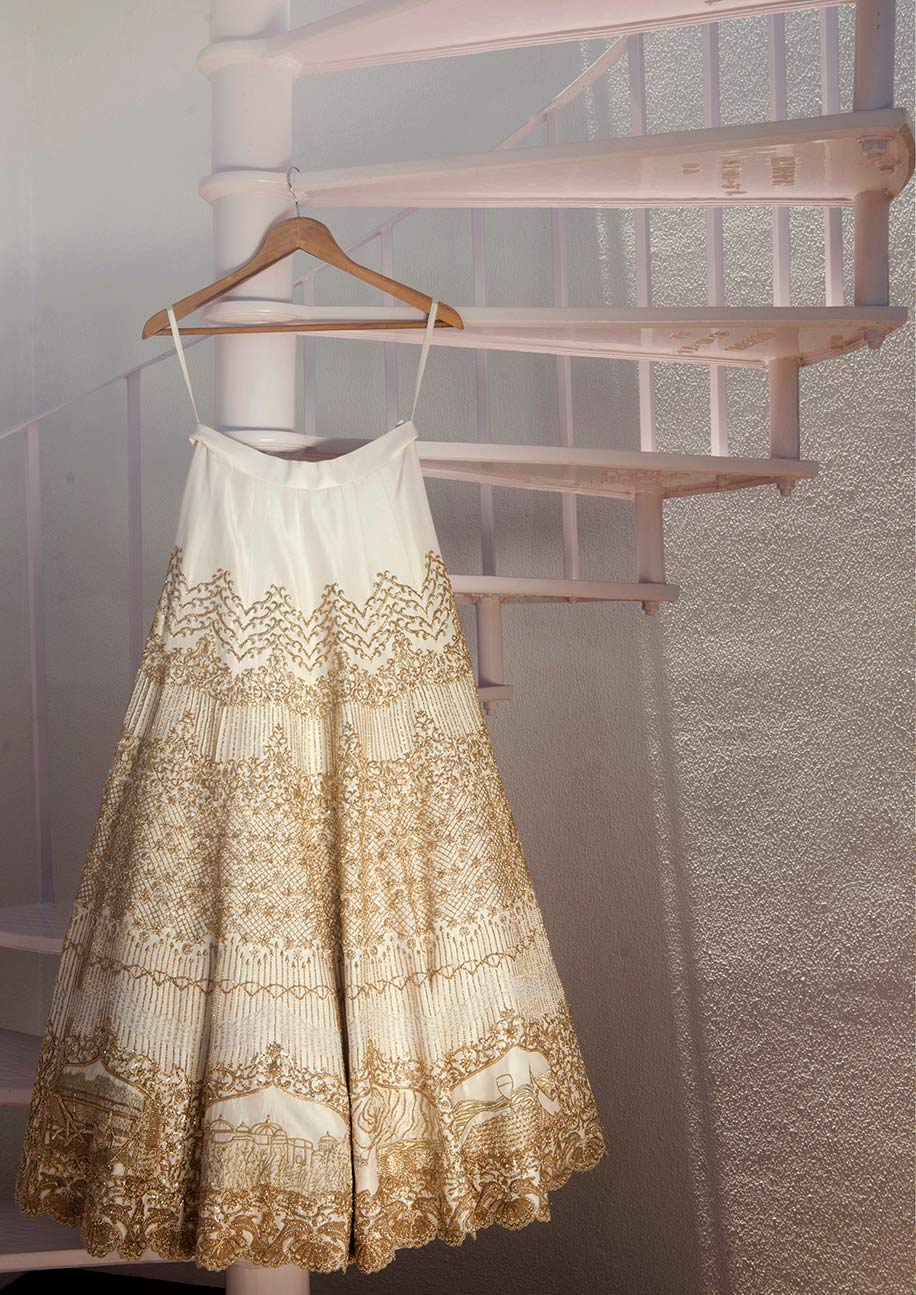 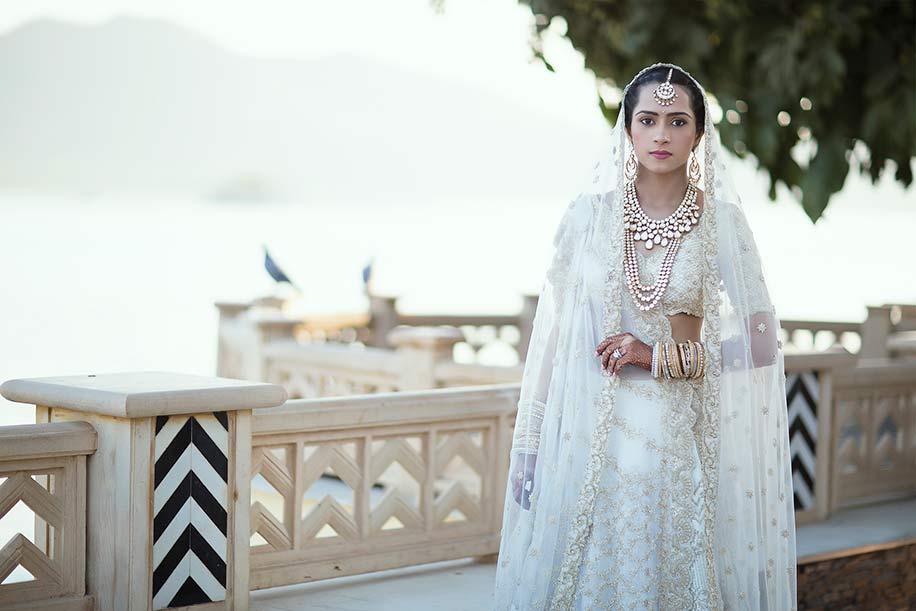 2. Sarada’s Gown With an Indian Twist
Sarada married her American boyfriend in a white wedding ceremony but created a set of elements that were a nod to Indian culture. In resonance with her South Indian roots, she wore a gold kamarband as accessory to her fishtailed white gown. She also accessorized with gorgeous kundan jewellery which went so beautifully with the entire ensemble we think this could be the start of a trend. Sarada wore two worlds at one white wedding and her look was truly unique.

3. Mitali’s Twinning Moment In Paithani
The mention of a Maharashtrian style ceremony would conjure up images of a bride in a paithani Nauvari saree. However, for Mitali who was very keen on wearing a lehenga for her wedding, her mother-in-law custom made her a paithani lehenga that went perfectly with her Bajirao Mastani themed ceremony. Not only that, she even had the most charming paithani jacket stitched for Mitali’s dog so that they could twin on her big day!

4. Punarvi’s Heartfelt Blouse Design
This one will bring tears to your eyes. Punarvi had a very specific vision for her lehenga and she wanted to carry with her, on her big day, the memory of her mother, inside her blouse, close to her heart. So in homage to her, Punarvi made a heart using the fabric from her mother’s wedding saree and had it stitched on the inside of the blouse so it sat atop her’s. Tucked inside, out of sight to the world at large, it added deep significance to her outfit. Guests however got to admire another detail: she developed an intricate pattern including her wedding logo of clocks in the design which was embroidered on the crimson crepe satin fabric of her lehenga. 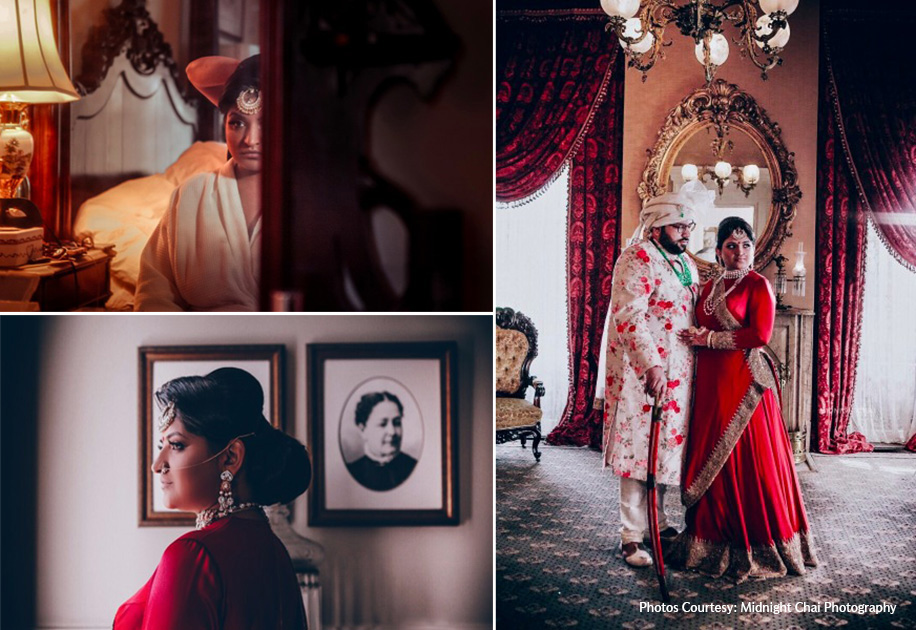 5. Nishka Lulla’s Legendary Lehenga
If there is one couple in all of Indian mythology known for their fabled amorous encounters, it is Radha and Krishna. Fashion designer Nishka Lulla took inspiration from their love and let her wedding lehenga become an ode to their bond by creating a ‘Radharani’ theme lehenga for her pheras. The border featured scenes from the gardens of Vrindavan making this one-of-a-kind outfit that evoked a love story from the ancients.

6. Mehereen’s Trending Mehndi
In the age of the internet and social media, hashtags have become an important addition to the wedding checklist. If you don’t believe us, you can ask Mehereen who even included her’s in her mehndi design! In between the intricate patterns, #MehrSufi was given a neat little space on her arm reminding her guests to make use of it each time she waved at them! Very cute!

This entry was posted on Tuesday, July 17th, 2018 at 12:36 pm and is filed under Bridal Fashion and Beauty. You can follow any responses to this entry through the RSS 2.0 feed. Both comments and pings are currently closed.