Mitali, Ali and his groomsmen go sleek and stylish with WeddingSutra Favourites

Grooming the groom has become a big trend these days, and men are matching brides when it comes to getting pampered, primped and styled. That’s what Ali, a businessman, and his band of buddies were treated to during WeddingSutra’s exclusive editorial shoot at Vivanta by Taj President to showcase looks for a groom and his groomsmen. His fiance Mitali also joined in to give the shoot the vibe of a real day-wedding. 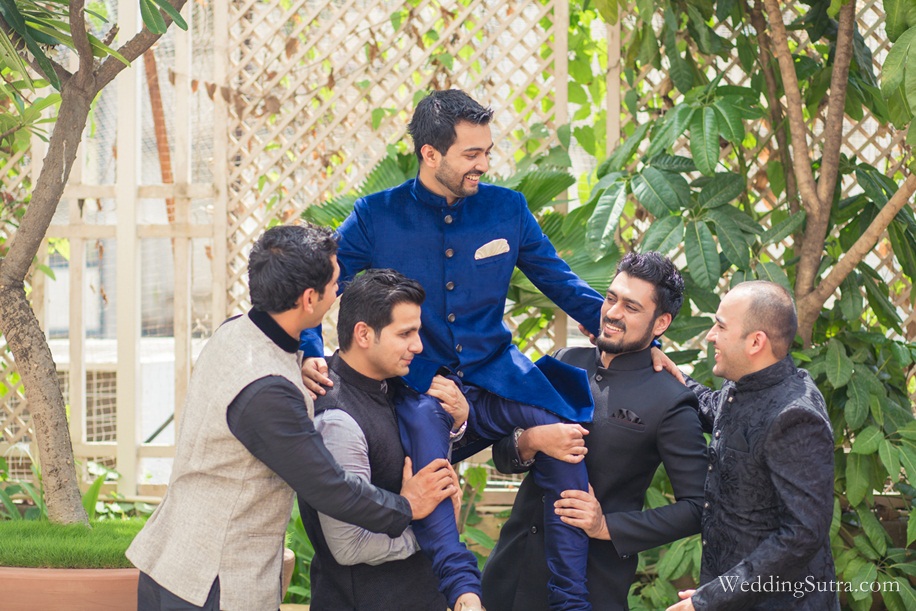 The pampering began at the luxury Taj Salon at Vivanta by Taj President where Ali and his buddies Aditya, Zaeem, Raunak and Varun got expert styling for their hair which they say they loved. Meanwhile, ensembles for their two looks – one ethnic and one Western – by Manyavar were being laid out for the shoot. The ethnic collection for the groomsmen featured different cuts in shades of gray and black – black self-design bandhgalas, Nehru jackets, long kurtas and Jaipur pants proved a striking contrast to groom Ali’s minimalist royal blue button-down sherwani which was paired with darker blue churidar pants, light brown mojaris and light lapel handkerchief. 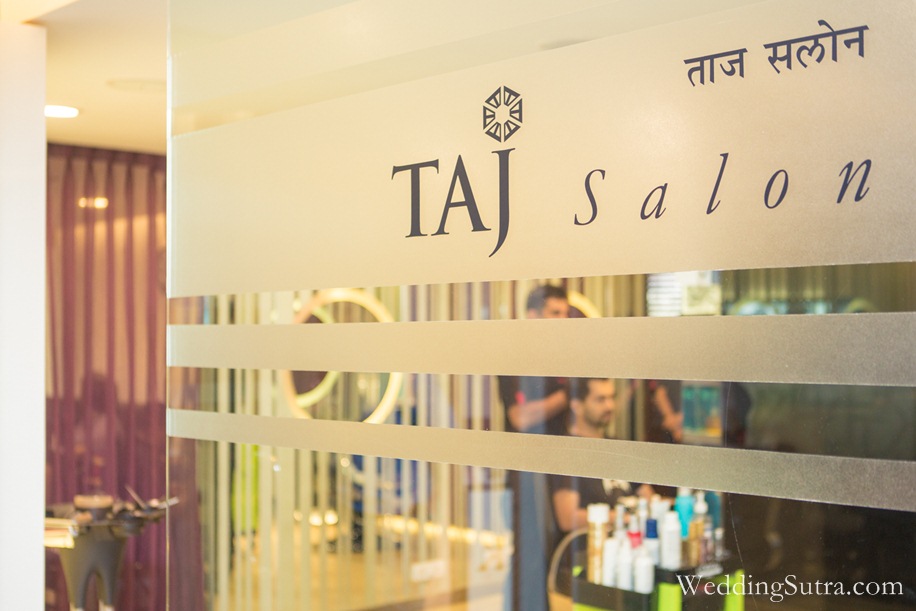 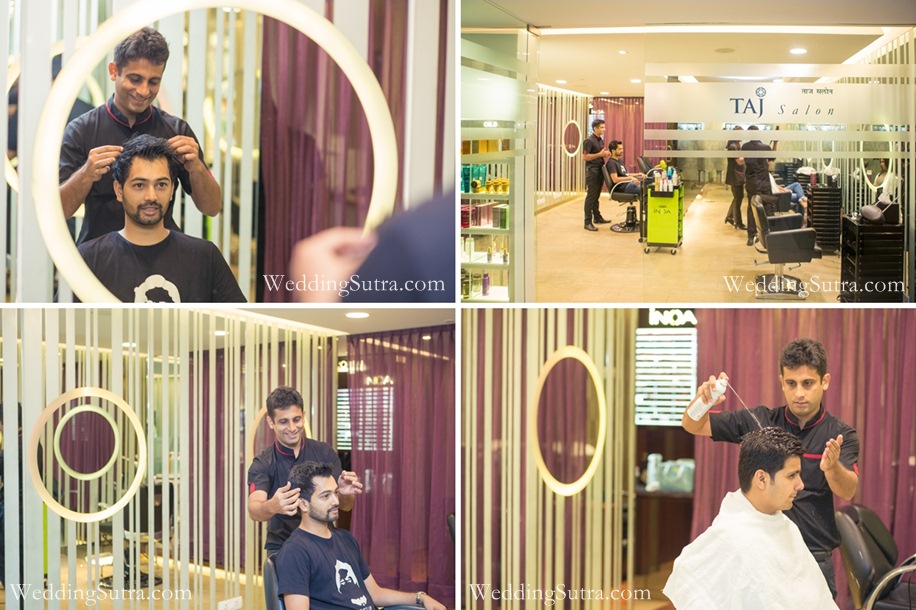 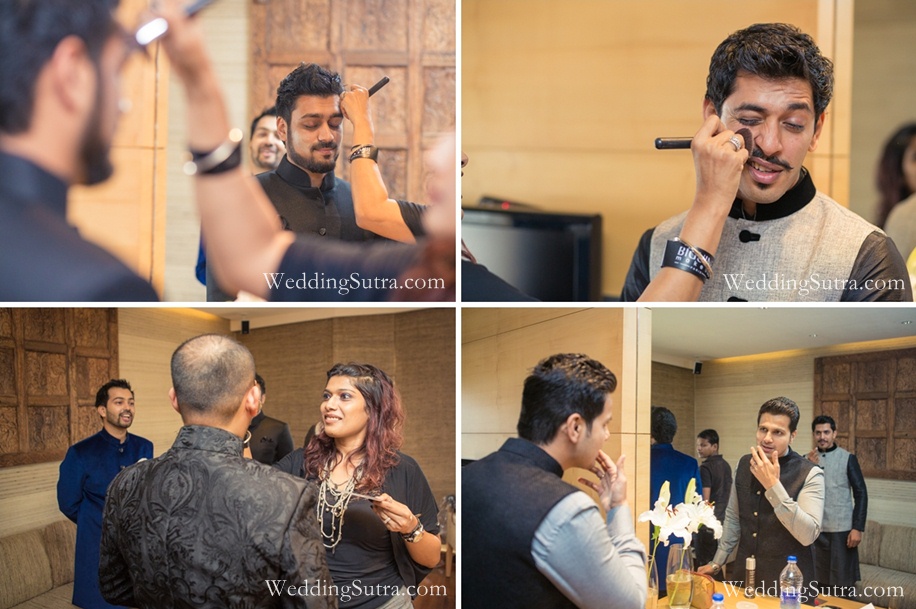 Each of the groomsmen has a different personal style and were initially unsure of how they would appear in their chosen outfits. However, the versatile range by Manyavar had something for everyone – and gave the guys a good idea of styles they could flaunt at their own weddings. 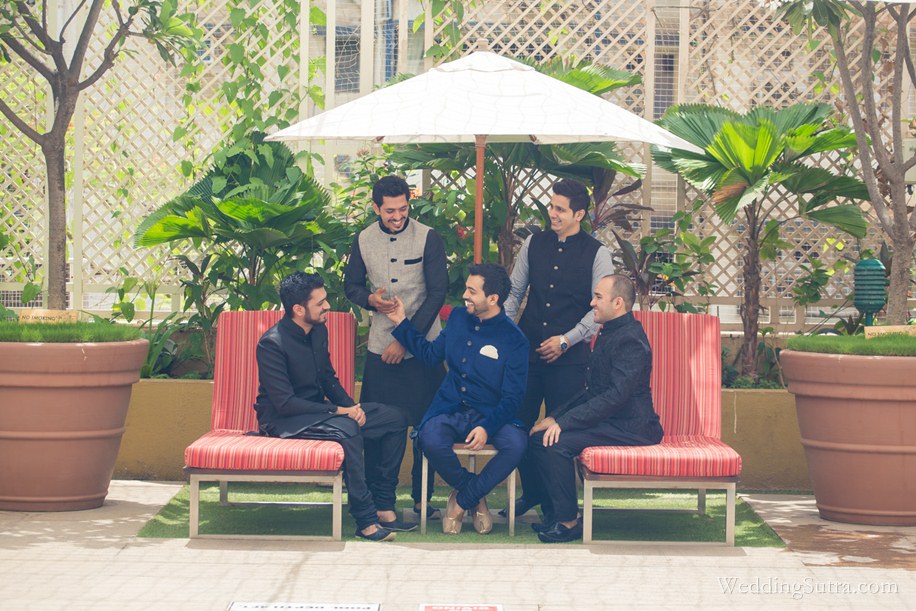 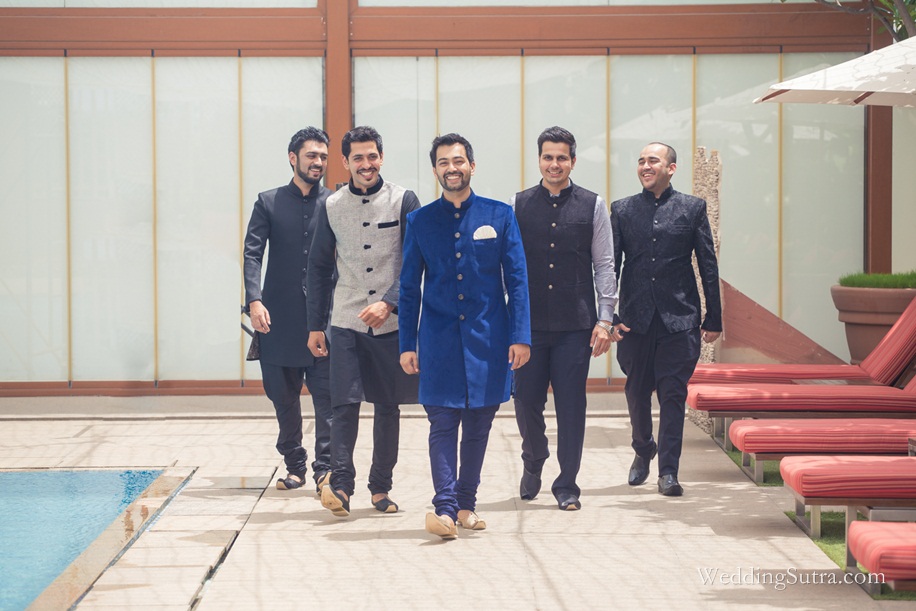 Mitali’s dark blue lehenga by Manyavar’s partner brand for women Mohey – for the ethnic look shoot – was resplendent with gold thread embroidery. Blue is her favorite color, and the light sheer net dupatta and short-sleeved gold blouse provided a stunning contrast to the heavy Polki jewellery by Ghanasingh Fine Jewels which made her feel like a royal bride. “The best part of the outfit was the weight. I always had a perception about bridal lehengas being super heavy but this was really light and comfortable,” says Mitali. 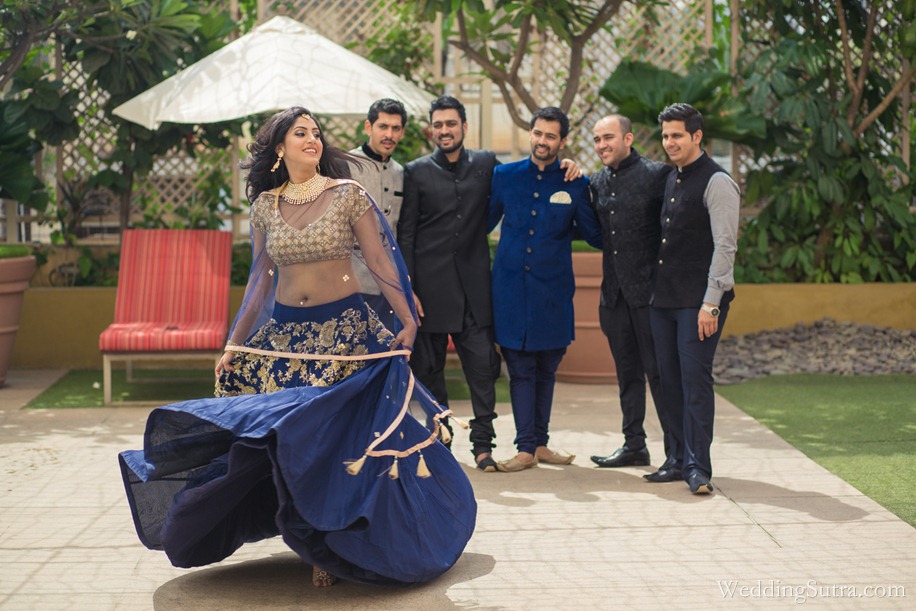 As Dev the photographer took the men and Mitali through their paces and poses, Ali enjoyed how much fun his squad was having, given that they had all taken a day off from work for this shoot. He shares, “I didn’t really know what to expect at the shoot. We’ve all seen and loved Manyavar’s ads and to be able to wear the outfits in front of the camera and show them off was pretty cool. What I really loved about the experience was having my boys and Mitali there. Plus, we were spending a day away from our jobs to do something we usually would never have been able to do during the madness of a real life wedding.” 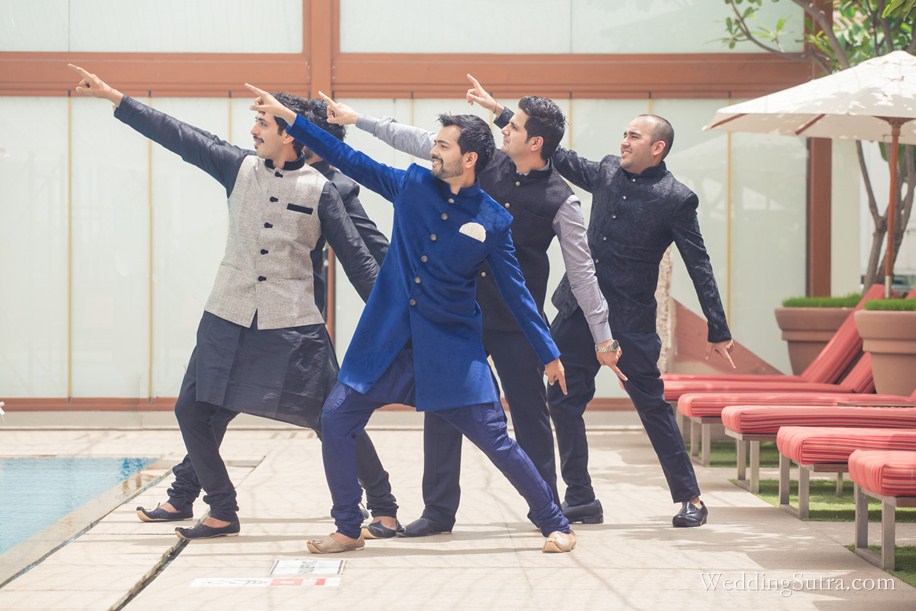 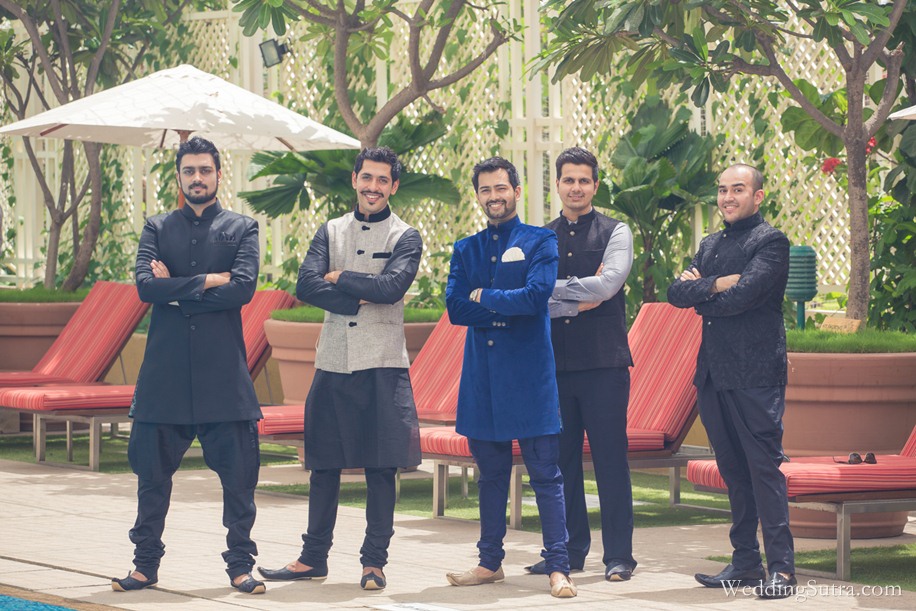 The Western ensemble shoot had the men clad in suits in fine shades of gray, with Ali donning a brilliant red tie while the others went with blue ones. Even the accessories were chosen with care – sleek ties by Dapper Homme and stylish watches by Art of Time. One groomsman was impressed by a sophisticated watch costing 7 lakh – which probably symbolized the popular idiom ‘Time is Money’. 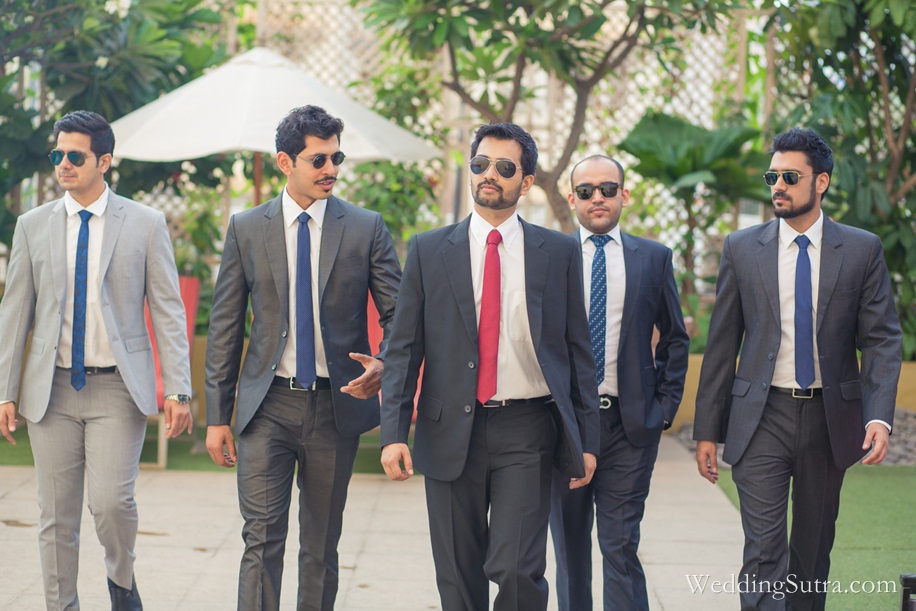 Dev and his photography team followed a ‘fly on the wall’ approach with their candid shots that showed the men in different real-life wedding situations – such as opening up gift boxes by SugarBox, taking pictures with their camera phones when Ali picked Mitali up in his arms or raising a toast with Johnnie Walker Black Label whiskey like they were at a mock bachelor’s bash at the Wink Bar at Vivanta by Taj President. 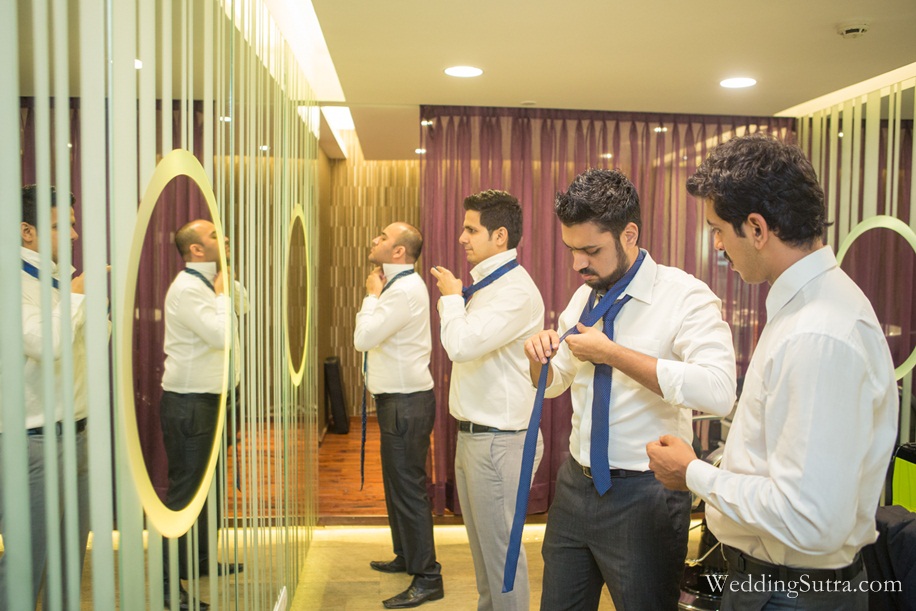 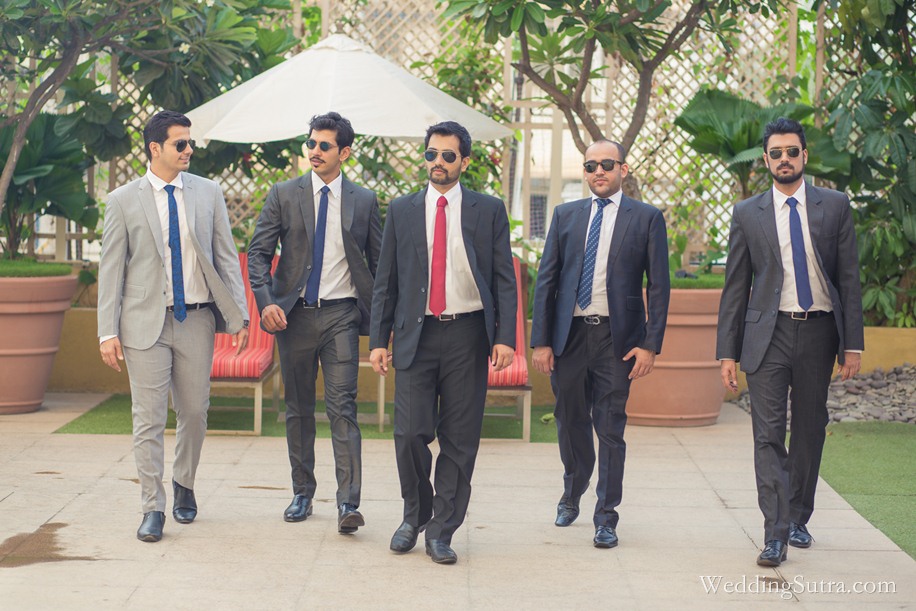 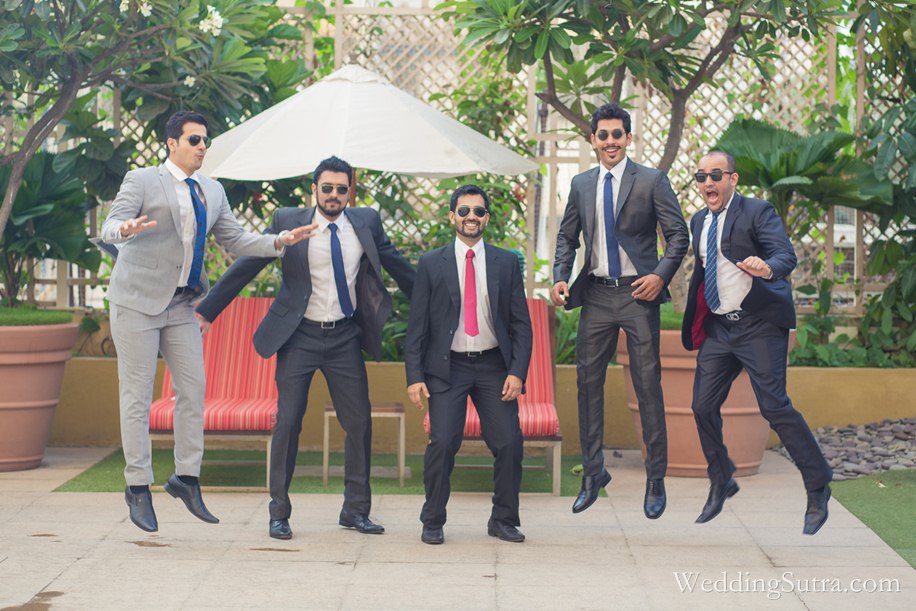 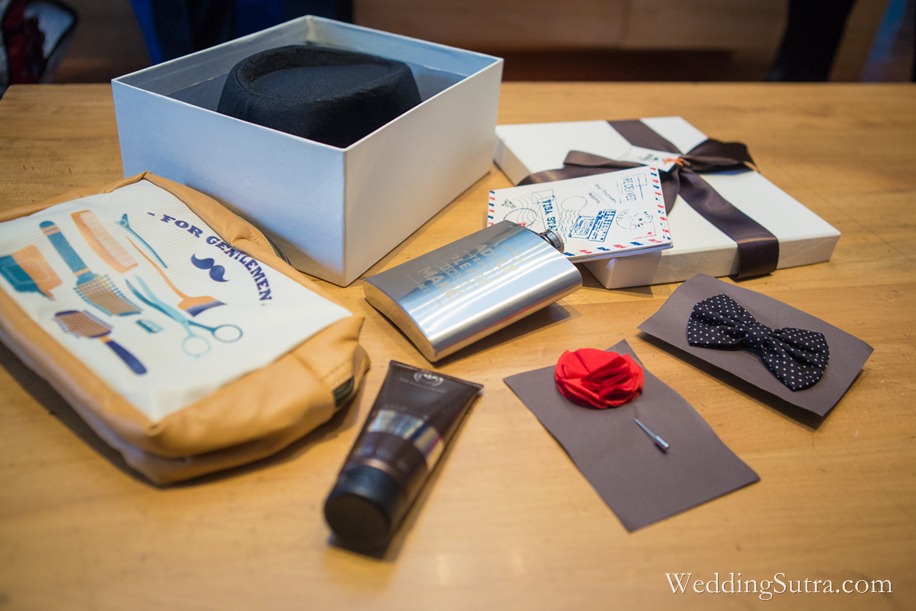 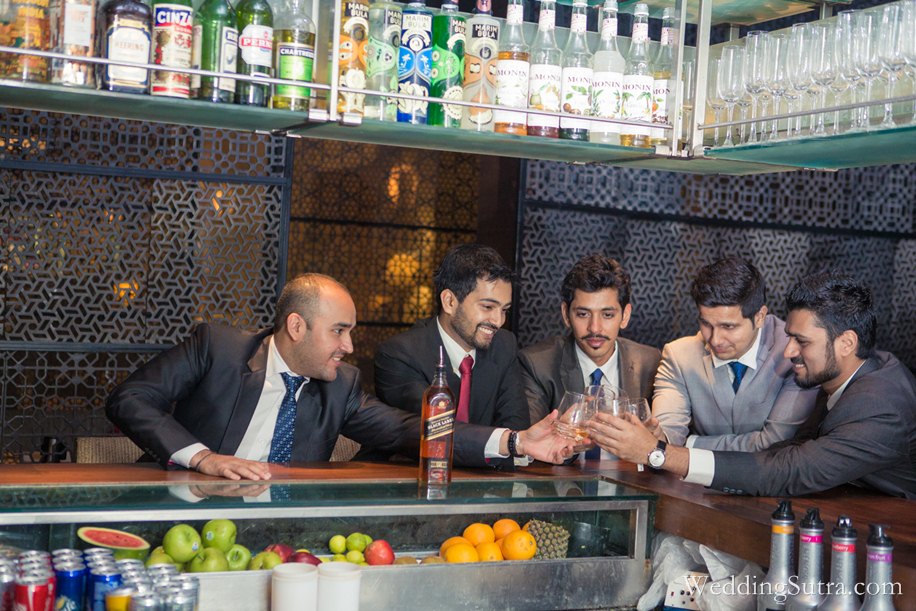 Bride Mitali wore a light turquoise lehenga by SVA by Sonam and Paras Modi for the second look with the men in Western outfits – this was paired with lighter diamond jewellery. She says, “The turquoise lehenga looked gorgeous and is perfect for a new-age bride. The color is subtle and young and the diamond set complimented it really well.” 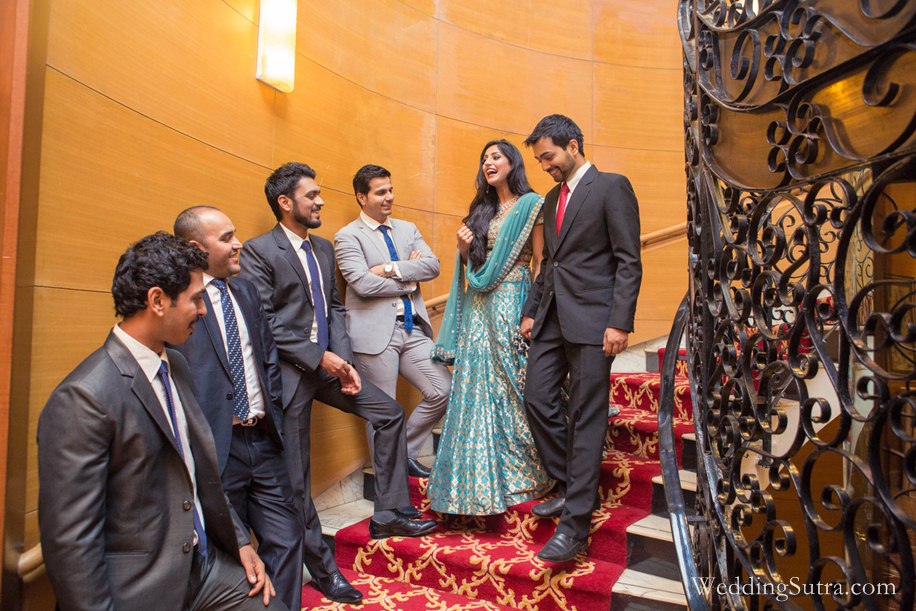 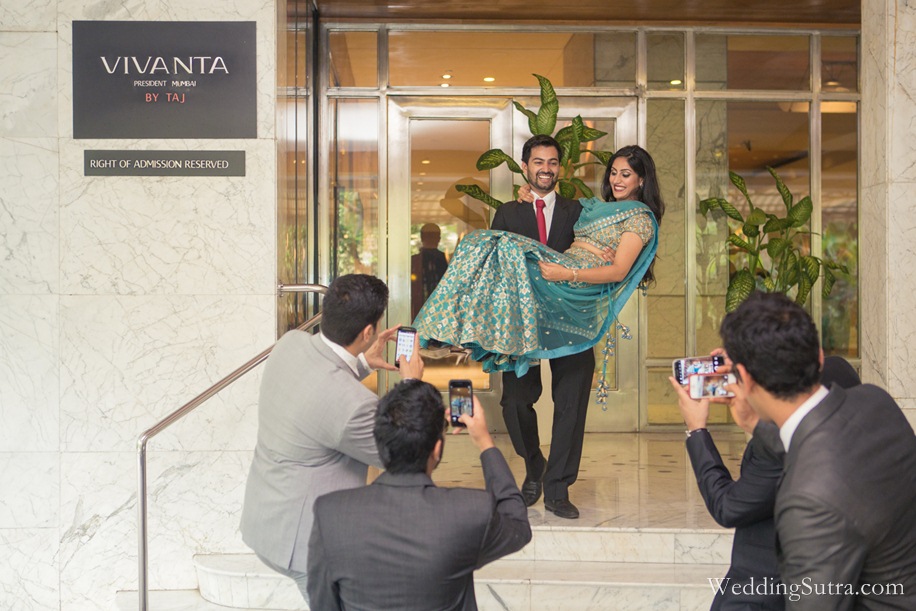 The real-life couple enjoyed the festivities and fashions they will soon replicate at their forthcoming wedding in Goa. It will be a new chapter in their relationship which started six years ago when Mitali was introduced to Ali by a common friend at a dinner. She heard from him six months later when a friend suggested Ali call her as he was looking for a pair of drumsticks for a musician friend. Ali had relocated to Mumbai from New Zealand where they had both been studying and joined his family business. Mitali helped him resettle in Mumbai and they visited the city’s popular food haunts and had long chats, during which they got to know each other. Shortly after, Ali proposed to her with a rubber O-ring from his manufacturing unit, which Mitali laughed and accepted. He promised to get her a platinum love band once he had saved enough for it. And he did! Read more here.

WeddingSutra wishes Ali and Mitali a fabulous, fashion-forward wedding in Goa and we are sure the dapper groomsmen will look the part!

This entry was posted on Wednesday, July 6th, 2016 at 6:21:52 pm and is filed under All About Grooms, Bridal Fashion and Beauty. You can follow any responses to this entry through the RSS 2.0 feed. Both comments and pings are currently closed.