Prarthana and David commemorated their ‘forever’ amidst the shimmering golden dunes of Suryagarh, Jaisalmer, in a two-day affair of grand festivities, all of which was planned and executed by WeddingSutra Favorite – Krayonz Entertainment. Here are some glimpses into the events.

How They Met
Prarthana and David’s meeting was very karmic. David is a finance professional with a passion for adventure sports. He has accomplished numerous feats of extreme endurance and has even been included in the Guinness Book of World Records for being the first person to finish a double summit on Mount Everest, from both the Nepal and Tibet sides. Prarthana too is a powerhouse of talent, with a multi-faceted career as an architect, Vedic astrologer, fashion designer and blogger.

In 2016, Prarthana read a newspaper article about David. She was curious about him and looked up more information about his achievements on his blog. On getting to know more of him, she developed an immense respect for his drive. Their first interaction took place through social media and their friendship developed over the course of two years. David even approached Prarthana for an astrology consultation and it was after this that their friendship started to evolve into something more. He made a trip to India and met Prarthana in person – from the moment they locked eyes, sparks flew.

Wedding Planning
Prarthana and David celebrated their relationship in a massive celebration that was carefully undertaken by Krayonz Entertainment. The two days of wedding functions saw beautiful decor setups, captivating entertainment and warm moments shared between the couple and their guests. Achint Nag, owner of Krayonz Entertainment, shares some highlights of the events.

Welcome Ceremony
On the first day, there was a traditional welcome party for the guests, with a flower shower at the Ganesh Dwaar, live Rajsthani folk music and a traditional Ghoomar dance performance. Keeping with the Rajasthani theme, there were camels at the entrance, welcoming the amazed guests.

Mehndi
The mehendi ceremony was held at Champa Garden and featured an expert mehendi artist from Jaipur. DJ Salvador provided the beats to get everyone in a celebratory mood.

Sangeet
The mehendi was followed by an upbeat sangeet ceremony, with people letting loose and swaying to the rhythm of DJ Salvador’s tracks at the Sunset Patio. Performances by the family entertained the guests and the bartending team by Suryagarh ensured that crowd had a constant flow of delicious drinks.

Nalangu (Haldi)
The Nalangu ceremony started off the second day of functions. Achint says, “Usually done on the night before the actual wedding, Nalangu is a traditional ceremony where the bride and the groom are made to sit on mats and three trays are kept near them, containing turmeric paste, kumkum, scented oils and a mixture of lime and turmeric in water. Kumkum is applied on the foreheads of the couple and turmeric paste on their feet, legs, hands and cheeks. After this, the older ladies in the family do an aarti around the couple.”

Wedding
The wedding ceremony featured several customs such as Palhara Bhoojanam, where the groom shares a meal with an unmarried boy wearing a sacred thread. There was the Kajal Ceremony, which sees the bride’s mother applying kohl on the groom’s eyes. And the Kashi Yatra, where the groom pretends to leave for the sacred city of Varanasi to embrace lifelong chastity, while the bride’s father persuades him to marry his daughter.

Achint says, “The bride made a grand entry, dressed in a breathtaking red lehenga by Sabyasachi. The couple tied the knot under a canopy of warm orange marigolds, with an Oonjal ceremony included. They also included the Tamil tradition of exchanging garlands made with white and red flowers three times, which added some humor to the meaningful celebration.”
Finally, the wedding rituals ended with the Grihapravesham ceremony, where the bride is taken to her new home. After the rituals, a delicious lunch was served with entertainment by Kaki. 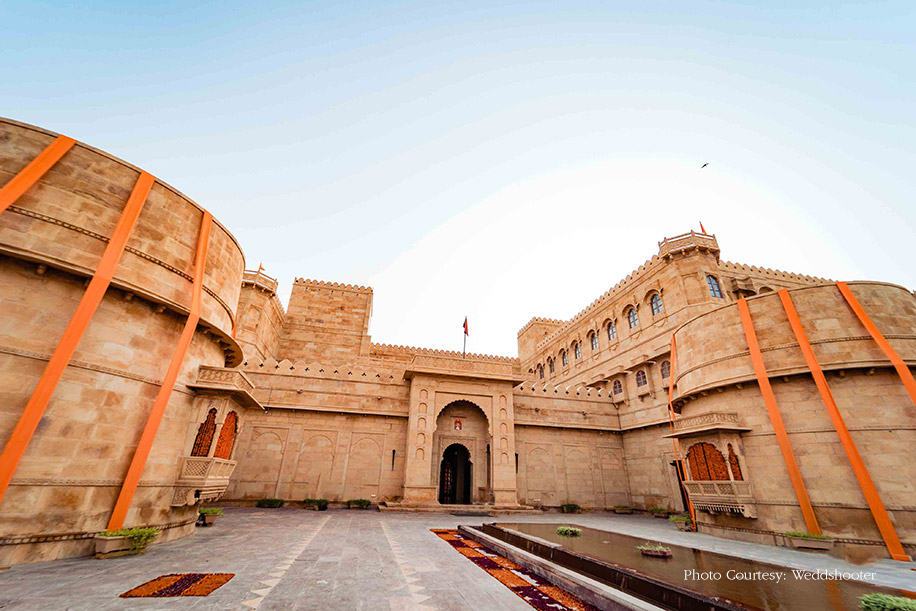 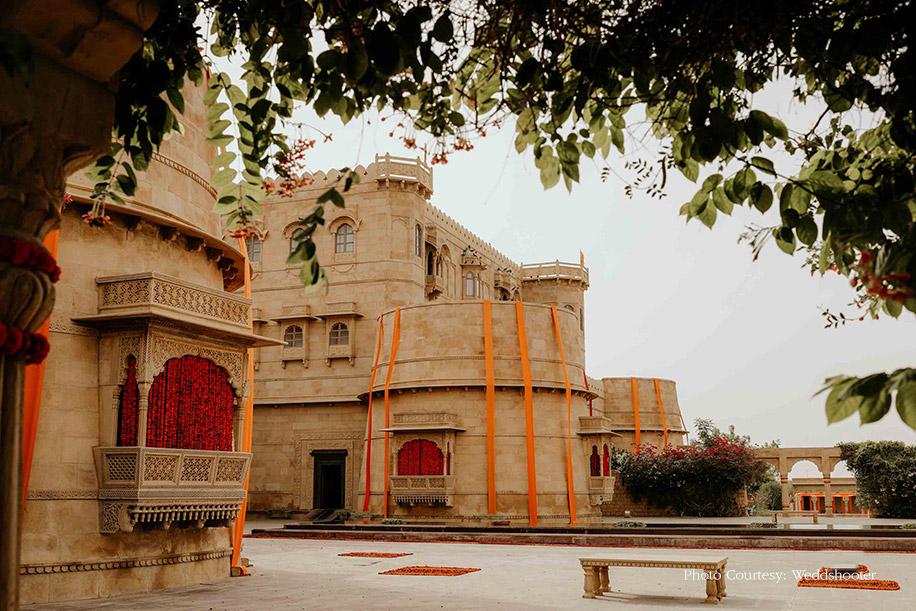 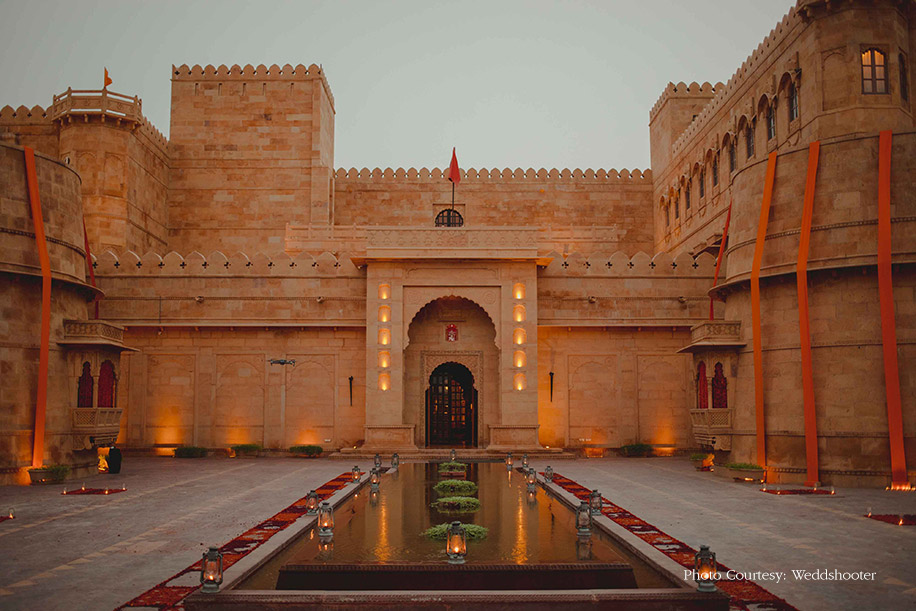 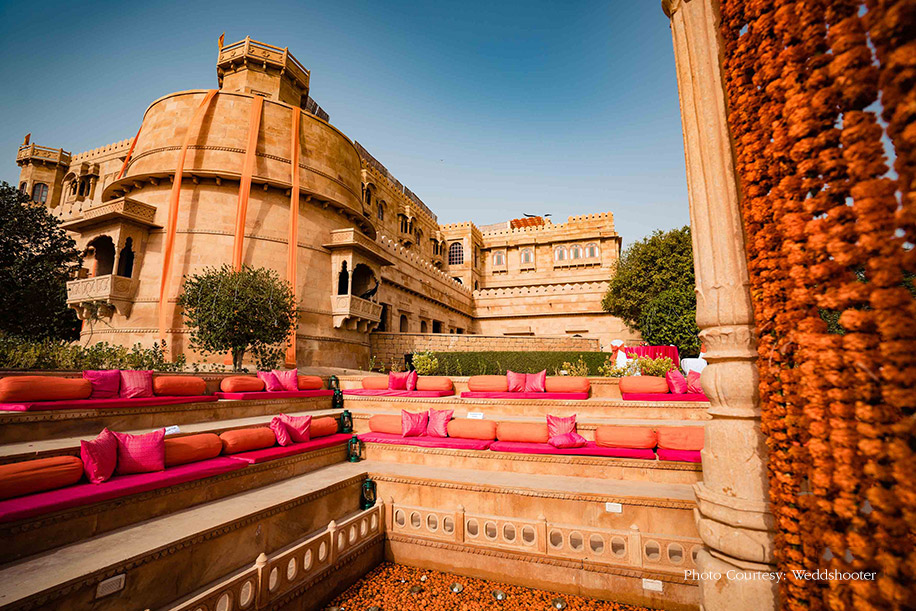 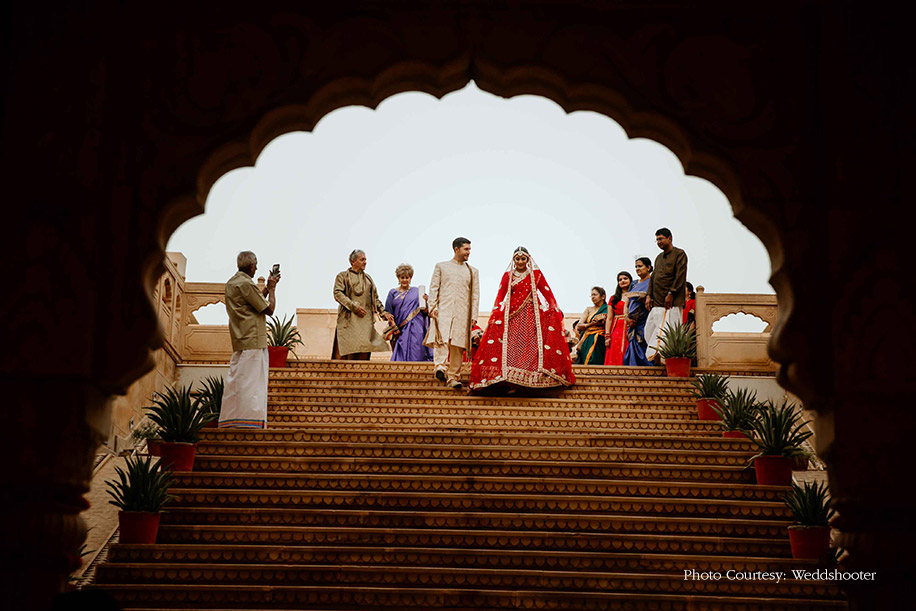 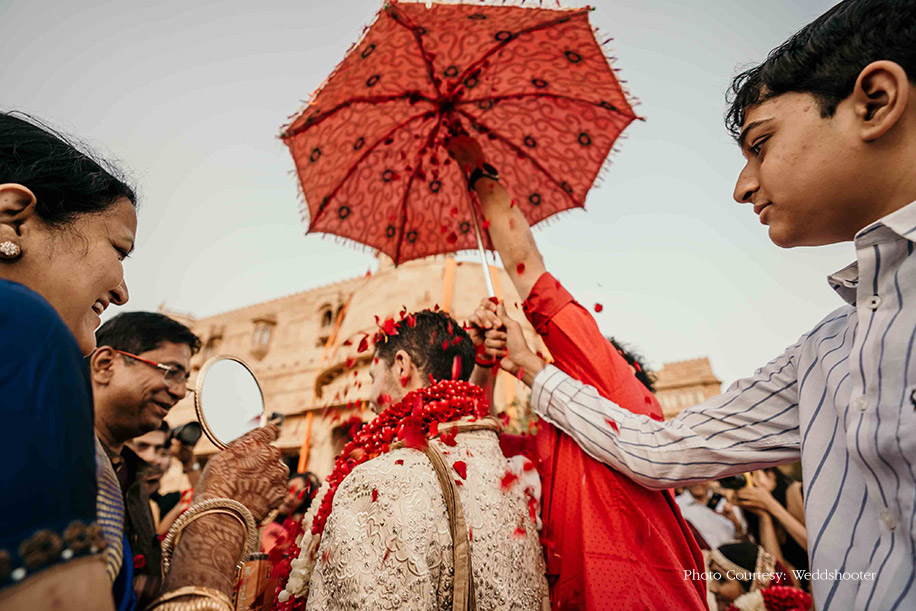 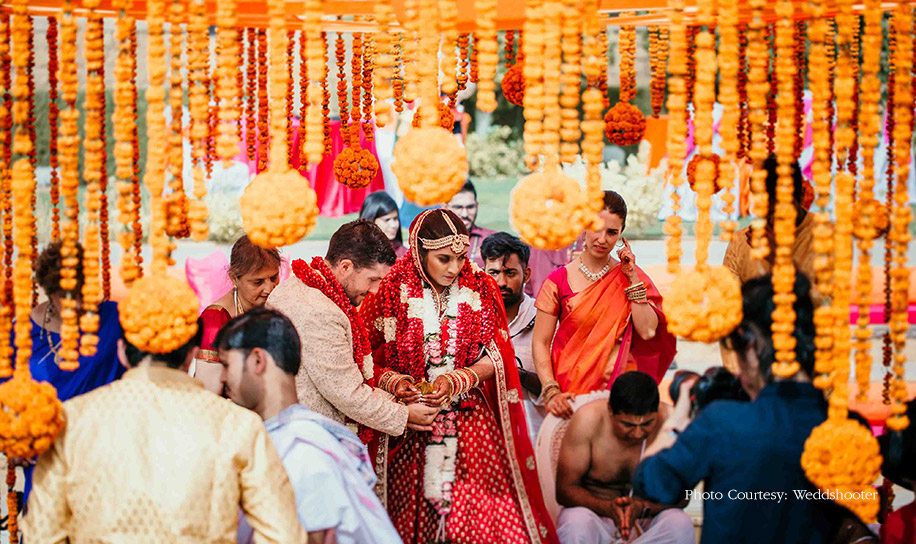 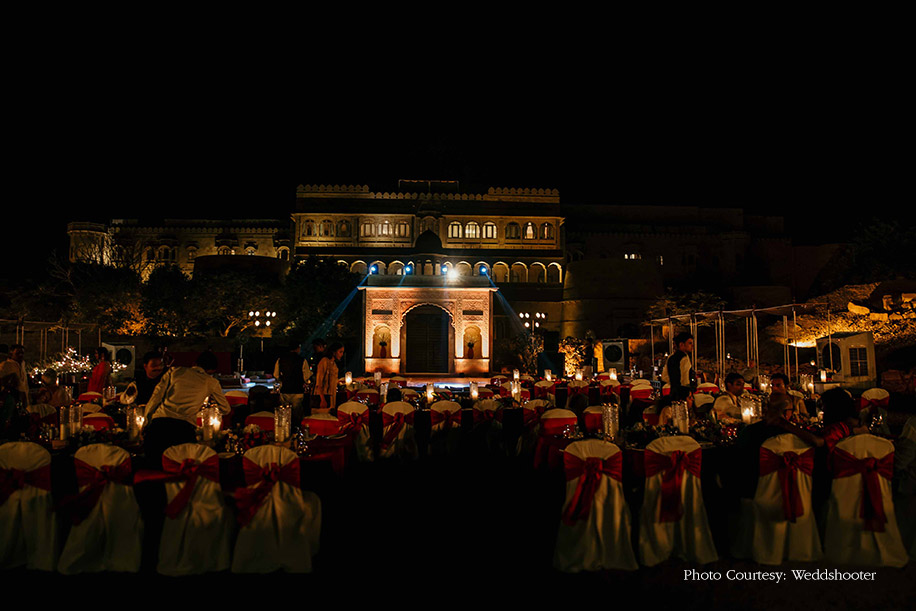 Reception
“Guests were welcomed to the grand celebrations with the beats of the Nagada dhol. Manganiyar and Troupe with DJ Salvador took care of the entertainment, while family members expressed their love and emotions through heartfelt speeches. An elaborate fireworks display was a fitting end to the two days of celebration and joy,” says Achint. 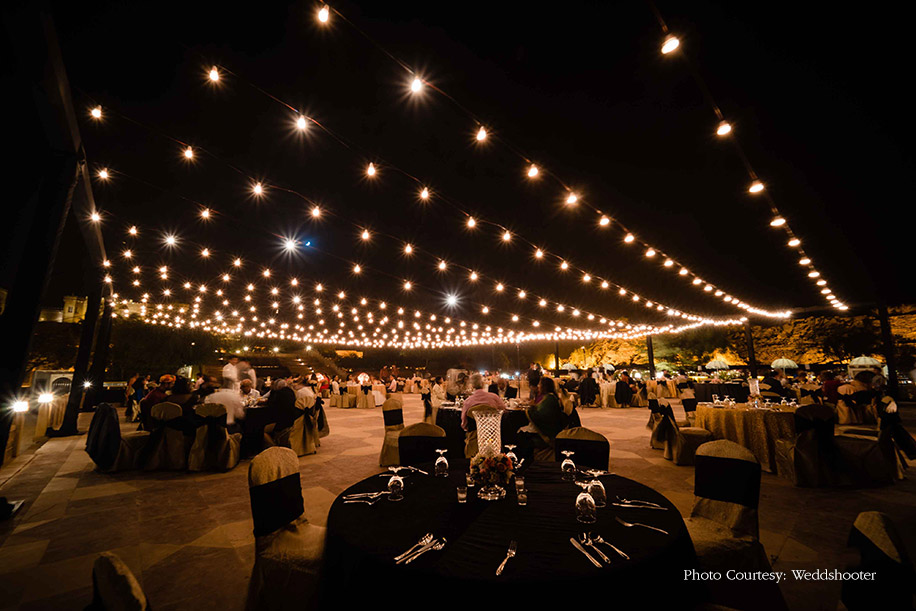 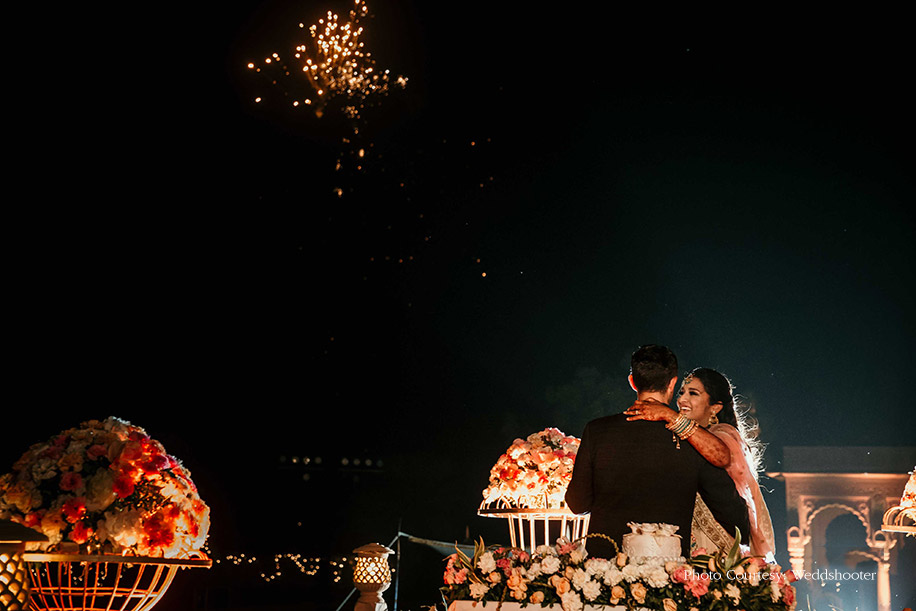 This entry was posted on Tuesday, December 31st, 2019 at 11:24:18 am and is filed under Wedding Planning. You can follow any responses to this entry through the RSS 2.0 feed. Both comments and pings are currently closed.