Two business tycoons hosted their daughter’s wedding in February. Tarini, elder daughter of Sajjan Jindal tied the knot with Vikram Handa. Trishla, the artist-daughter of Samir Jain, Vice Chairman of The Times of India group married Miami-bred, Stanford graduate Satyan Gajwani. Ace Wedding Planner Vandana Mohan managed the Jindal wedding. The pre-wedding celebrations were at Shangri-La’s Villingili Resort & Spa, Maldives and the wedding at the Jindal farmhouse in Delhi. The Jain wedding at Jagmandir, Udaipur, was around the same dates as the Jindal wedding, and was co-ordinated by 360 Degrees, the event management division of The Times of India group. Some of Delhi’s A-list bridal specialists and wedding vendors were contacted by both families, and they had to take the tough decision to figure out which wedding to go to. We presume many VIP guests faced a similar quandary!

When Tanvi, the younger daughter of Sangita and Sajjan Jindal got married in Florence last year, WeddingSutra published reports on how the Florence media went ga-ga over the Maharajah style wedding. Back in India, the wedding generated a lot of interest too. Many WeddingSutra visitors are enquiring if we’ll be featuring elder sister Tarini’s wedding photographs. But the bride and groom wish to keep it private, and so we have no pictures to share. We’re still trying though! Media moguls Jains also guard their privacy fiercely, so here again we have no pictures or details on the Trishla- Satyan wedding.

Fashion enthusiast Tarini ran Muse the erstwhile store in Kala Ghoda, she now lives in Abu Dhabi where Vikram manages his family business; Trishla, a poetry and literature graduate from Stanford, is Meera and Samir Jain’s only child. Her first solo art exhibition was held last year, and besides wielding the paintbrush, Trishla takes keen interest in spirituality writings and has over-seen the launch of Times weeklies Times Crest and The Speaking Tree. Satyan relocated to Delhi some years ago, he works with the Internet division of the Times of India group. 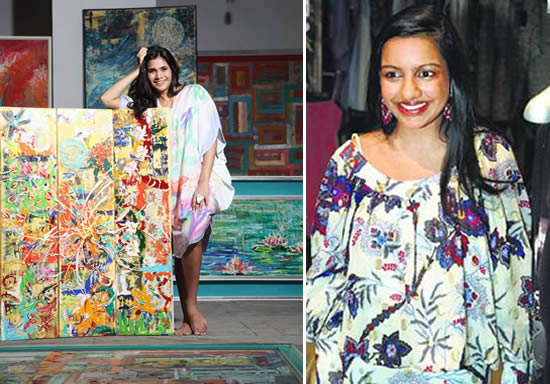 This entry was posted on Sunday, February 27th, 2011 at 6:34:31 am and is filed under Destination Weddings. You can follow any responses to this entry through the RSS 2.0 feed. Both comments and pings are currently closed.