Kareena and Saif’s invitation card is all over the world wide web thanks to an invitee Nawab Kazim Ali Khan of Rampur who uploaded the much sought-after invitation on his Facebook fanpage. The invitation is simple & elegant. Not an elaborate creation from Delhi’s famed invitation card designers like Ravish Kapoor or EDC, one of whom usually design cards for the rich and famous. Kareena and Saif’s invitation is very typical in royal style. We asked Royal Historian & Blogger Akshay Chavan what he thinks of the same. “The royal invitations were never known to be flashy or flamboyant. White or cream colored cards with the family crest embossed in gold was the royal signature style. It was all about understated elegance. An interesting feature of this invitation is the use of their title. Pataudis have generally downplayed their royal origins. But mother Sharmilla has mentioned her name in the invitation as ‘Begum Mansur Ali Khan Pataudi’ underlining her status as the ‘Begum of Pataudi’. 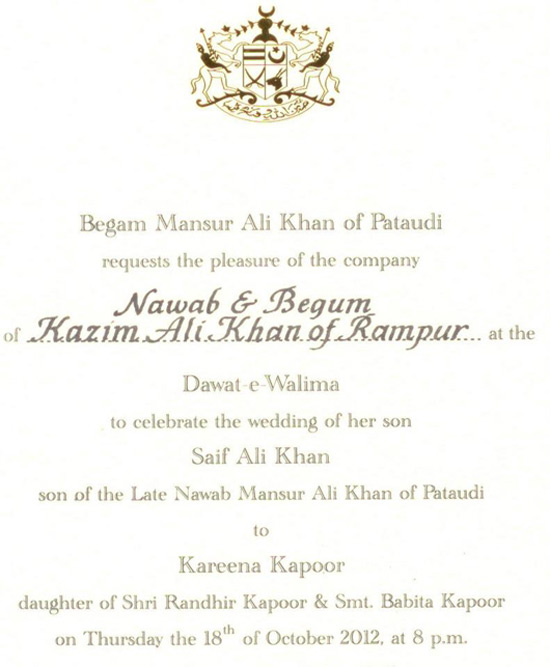 This entry was posted on Monday, October 8th, 2012 at 1:36:56 am and is filed under Wedding Planning. You can follow any responses to this entry through the RSS 2.0 feed. Both comments and pings are currently closed.