When two sisters decided to get married around the same time, it had to be a doubly grand affair. Chinky, a radiologist, recently tied the knot with Sanjay, an engineer and stand-up comedian, while her sister Shili, a fashion designer, wed Sasi who is a banker. The siblings had always hoped to wed around the same time, and WeddingSutra Favorite – Krish Events made sure their dream turned into a reality. 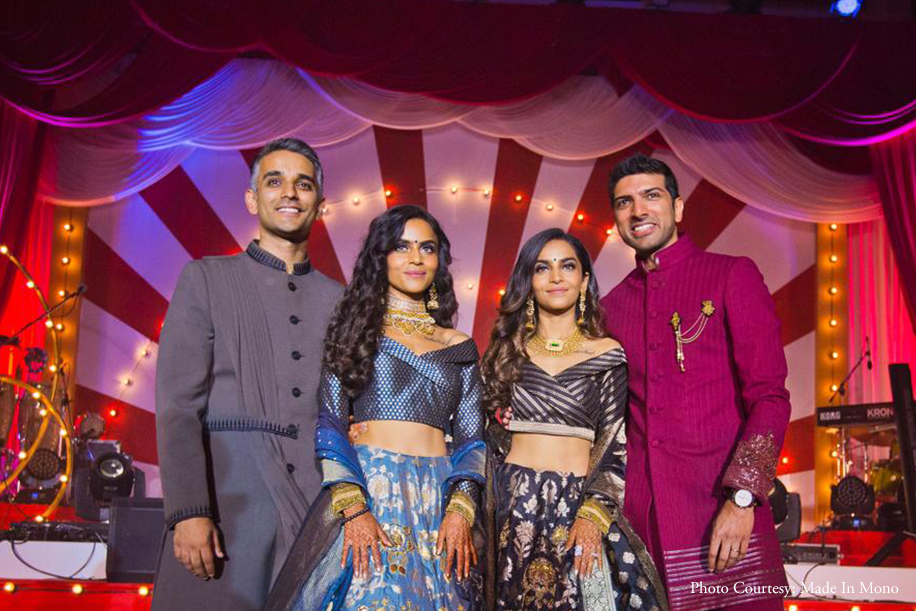 Chinky shares, “Sanjay and I knew each other through common friends and lost touch since our professions demanded more attention. Years later, when we reconnected, there was no looking back. We had gone for a road trip in California, where Sanjay took a slight deviation and drove to The Ritz-Carlton, Half Moon Bay. As we made our way through the golf course to get a glimpse of the Pacific Ocean, he went down on his knee and surprised me with a wedding proposal.”

Shili recalls, “Sasi and I met through mutual friends, and after a few dates, we realized we had fallen in love. We were in Italy on a holiday when he asked me to dress up a little since he had made plans for an excursion. He had hired a local photographer to follow us around and capture all the moments leading up to the proposal where he got down on one knee and asked me to marry him.”

Wedding Planning
Chinky shares, “We all made a trip to Thailand to explore different properties in Phuket, Pattaya, and Rayong. After facing disappointments, we had one last resort to see in Bangkok. The moment we entered the premises of the Anantara Riverside Bangkok Resort, we all had smiles on our faces. Shili adds. “It was the perfect combination of being modern chic while staying true to traditional Thai roots. A beautiful river connects the hotel to various tourist attractions such as night markets and shopping malls. A sister hotel called the Avani+ Riverside Bangkok Hotel is connected to it with a mall on the same level, which ensured that our guests had a comfortable stay and easy access to anything that they pleased.”

Giving insights into planning their dual weddings, Shili said, “We delegated and divided tasks and made sure everything was taken care of, without any head bumping or drama at all. We were successful in executing the wedding of our dreams. Chinky chimed in, “Despite having four to-be-weds involved in the planning process, everything went on smoothly. A joint wedding, along with the dream team, made it easier in our case. All our outfits were from our home brand JinaShili, and we matched all our ensembles following different color schemes.”

Chinky shared, “Krishna from Krish Events is like family. She handled every aspect of the wedding planning with total finesse. Shili agrees, “It was a pleasure to work with the talented team of Krish Events. We couldn’t have found a better planner and feel blessed to have had them on board.”

Mehndi
Their carnival-themed mehndi event was celebrated at Trader Vic’s in Anantara Riverside Bangkok Resort, overlooking the river. Guests enjoyed flavorful bubble tea, and hot popcorn served at stalls while they relaxed in cabanas. The function took a fun turn where everyone enjoyed the carnival games such as Spin the Wheel, Toss the Ring and Giant Darts, along with doing the garba on famous Indian pop and Bollywood songs. 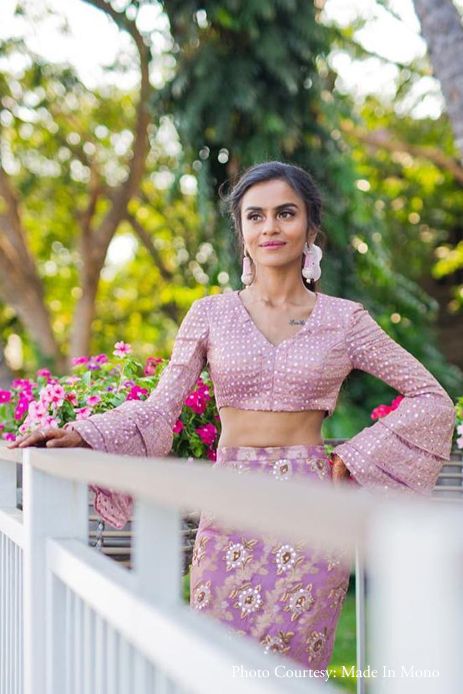 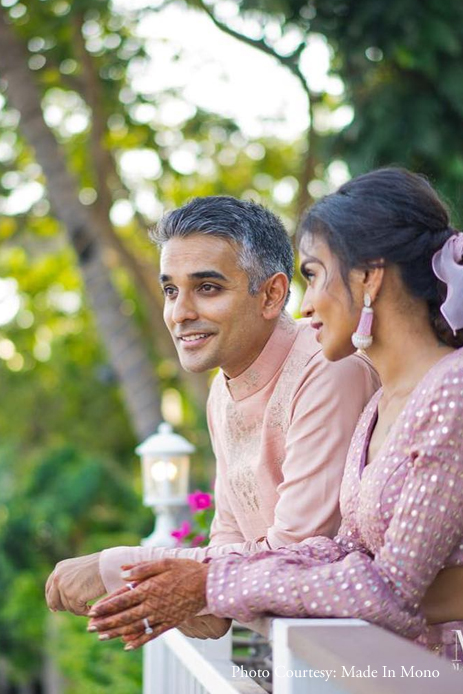 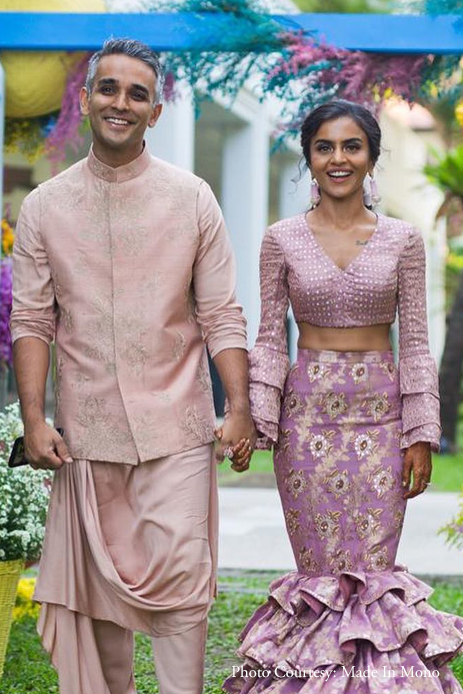 Sangeet
The couples hosted their sangeet night in the evening, and this event had a ‘Let the show begin’ theme. The entranceway had a circus-like vibe and was decorated with elements recreating a balancing act. The entire venue was lit up with umbrellas hanging upside down. The grooms, along with their friends, had surprise dance performances prepared. The brides too danced on a medley with their friends and their father. Bryden and Parth took to the stage and performed a mix of Hindi and English songs, which led guests to the dance floor. 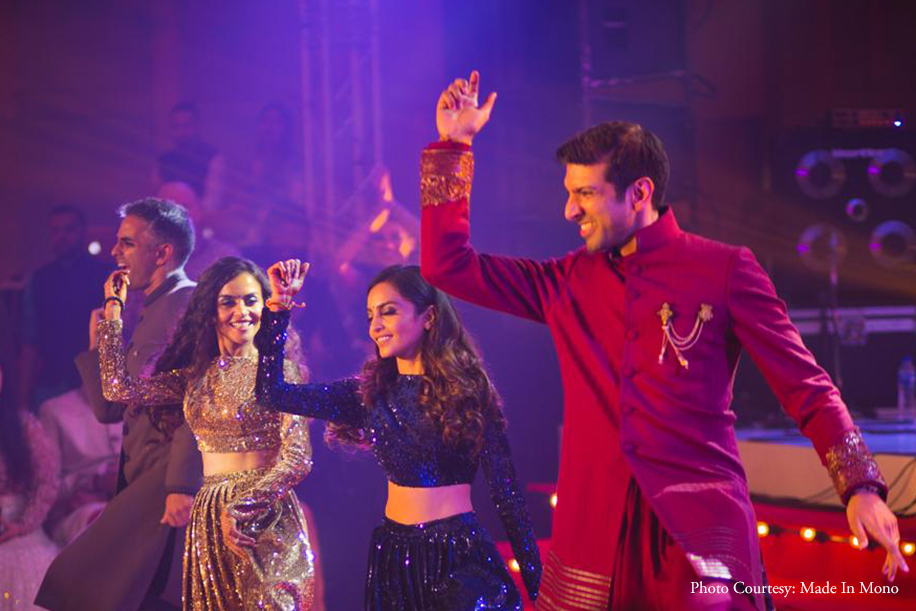 Wedding
Sanjay and Chinky’s rustic-chic themed wedding was hosted at Montien Riverside Hotel’s expansive lawn with a pier overlooking the river. Sanjay’s baraat made a grand entry on a boat and was welcomed with color bombs at the venue. Chinky made a dramatic entrance with her brothers holding aloft a floral canopy over her head. Following the same theme, the mandap was made out of logs and twigs with veils of flowers suspended from the ceiling. As soon as Blessing Chimanga started performing, everyone was up and dancing.

Sasi and Shili’s wedding had an ‘Enchanted Forest’ theme, and it was celebrated inside the Grand Sala at the Anantara Riverside Bangkok Resort. Shili made a stunning entrance with her father riding a tricycle. Their mandap was decorated with sakura blooms and paper butterflies hanging from the ceiling. The bride’s mother added a personal touch by designing and painting ‘antarpat chaadars’ (a piece of cloth held between the bride and groom to prevent them from seeing each other before a wedding ceremony) for both Chinky and Shili with special notes and messages. 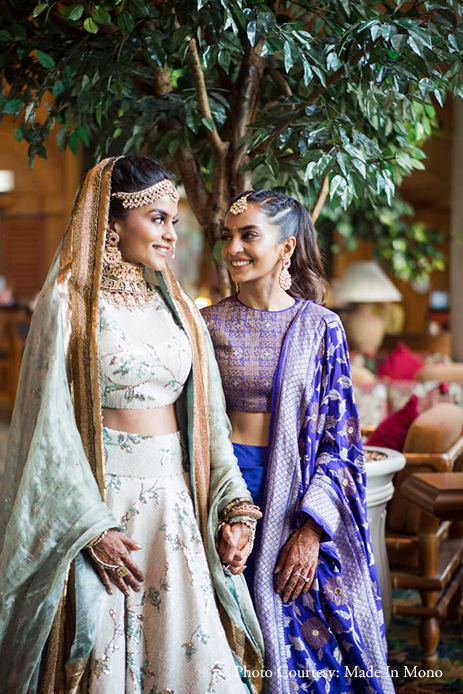 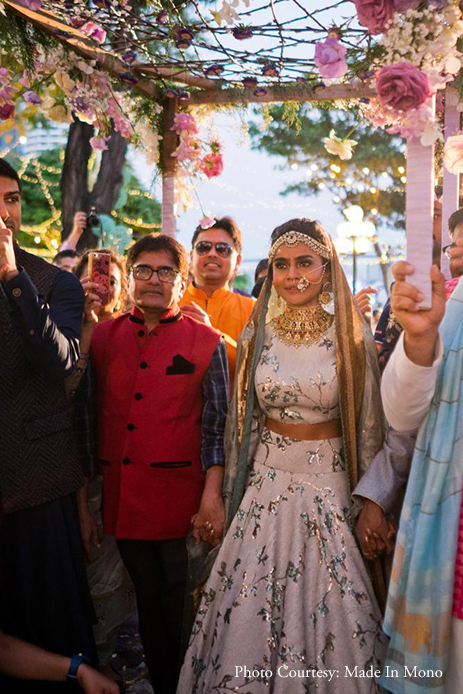 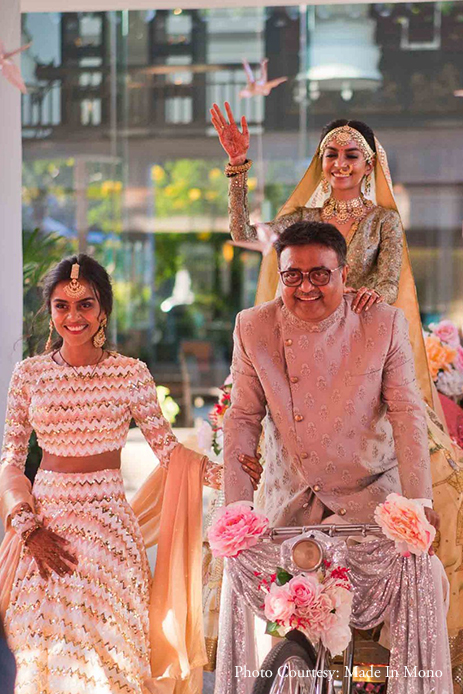 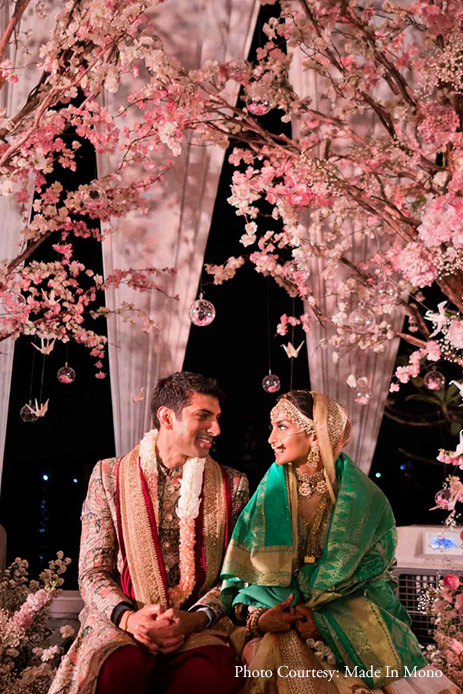 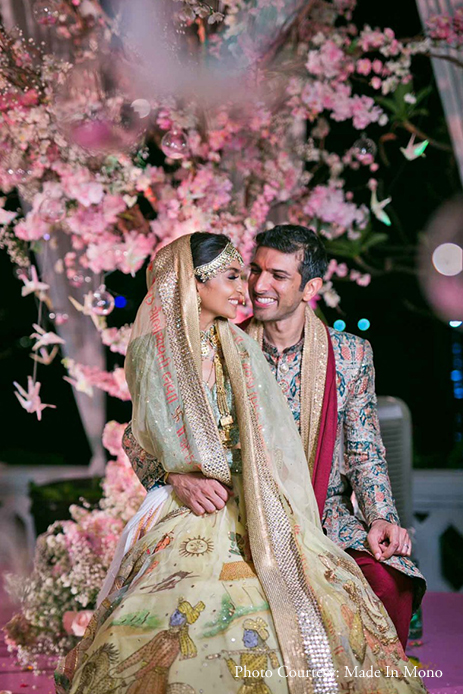 Reception
Both the newlyweds had a combined vintage themed reception in the evening. The entrance to the venue was decorated with treasure chests, mirrors, old cognac bottles, and antique picture frames. The inside of the ballroom had a predominantly vintage vibe with other diverse eclectic details. The night ended with an after-party which went on till the wee hours of the morning.

Photography: Made In Mono

This entry was posted on Monday, May 18th, 2020 at 5:29:28 pm and is filed under Wedding Planning. You can follow any responses to this entry through the RSS 2.0 feed. Both comments and pings are currently closed.