This guy proposed to his love during a downpour, while she picked the Thar Desert to pop the question to him!

Pooja and Aman’s love story started at the age of 14, when they first became friends. After a rollercoaster journey that was peppered with ups and downs, these childhood sweethearts began a new chapter in their lives with two wedding proposals in which, both, Pooja and Aman went down on their respective knees in different locations. How They Met
Pooja shares, “Aman and I first met in the ninth grade as we both went to the same tuitions. Eventually, we became best friends and our friendship blossomed into love. Now that I look back, I think that we were very lucky to experience love in the pure form of friendship at that innocent age. That really helped us understand each other better and got us where we are today. Despite, all these years, we still continue to say ‘Good Morning’ and ‘Good Night’ to each other just like the best of friends. Who would have thought that we would land up here 10 years later!”

Proposal
True to form, the couple made sure they made each other feel special in dual proposals. Aman organized his proposal in Alibaug, while Pooja planned hers in Jaisalmer.

For his proposal, Aman chose the golden hour at Alibaug to pop the question with a little help from Pooja’s pet dog Rio who probably will go down as one of the cutest ring bearers in history. 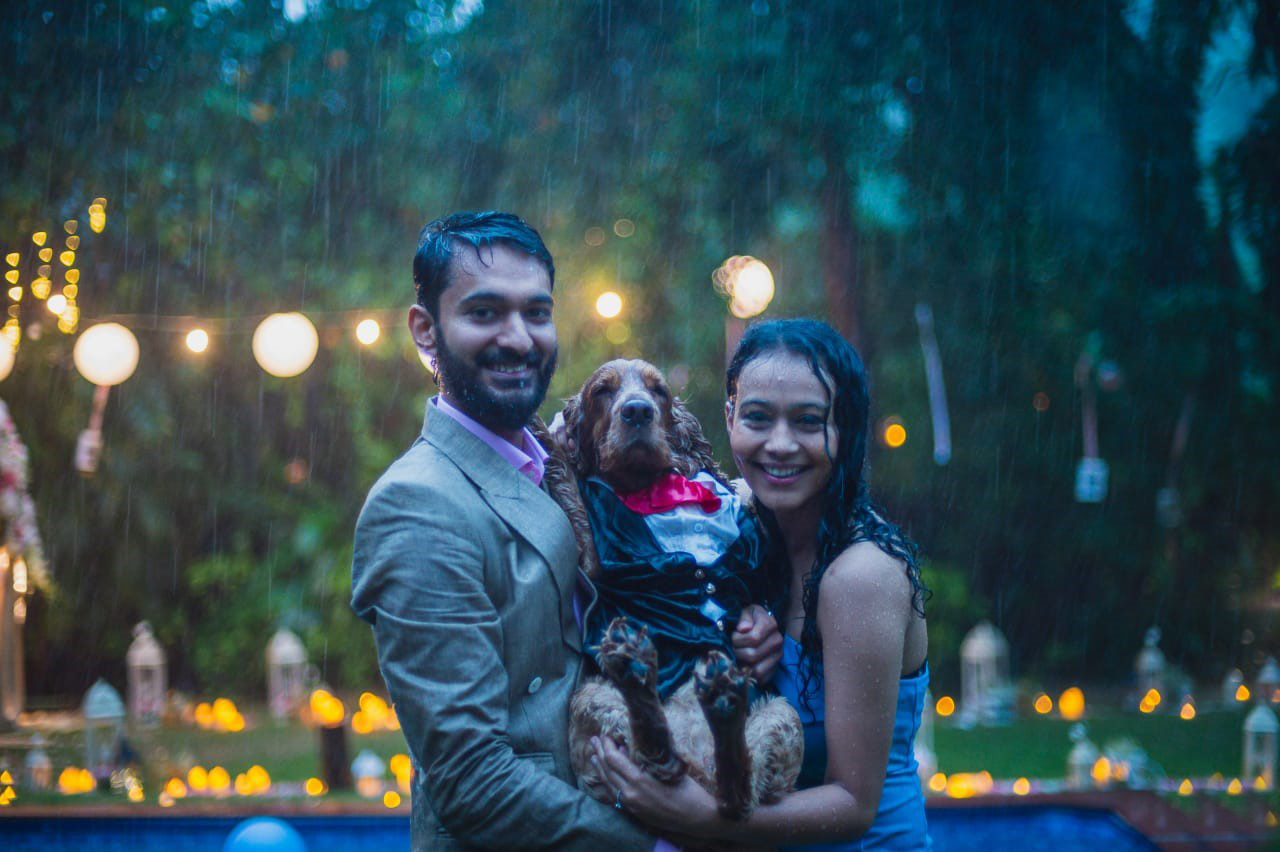 With a magical setup consisting of white lanterns, flowers, candles, twinkling fairy lights and pictures of all their happy moments through their 10-year journey spread out on a green lawn, Aman went down on one knee in front of his childhood sweetheart who looked stunning in a blue dress. 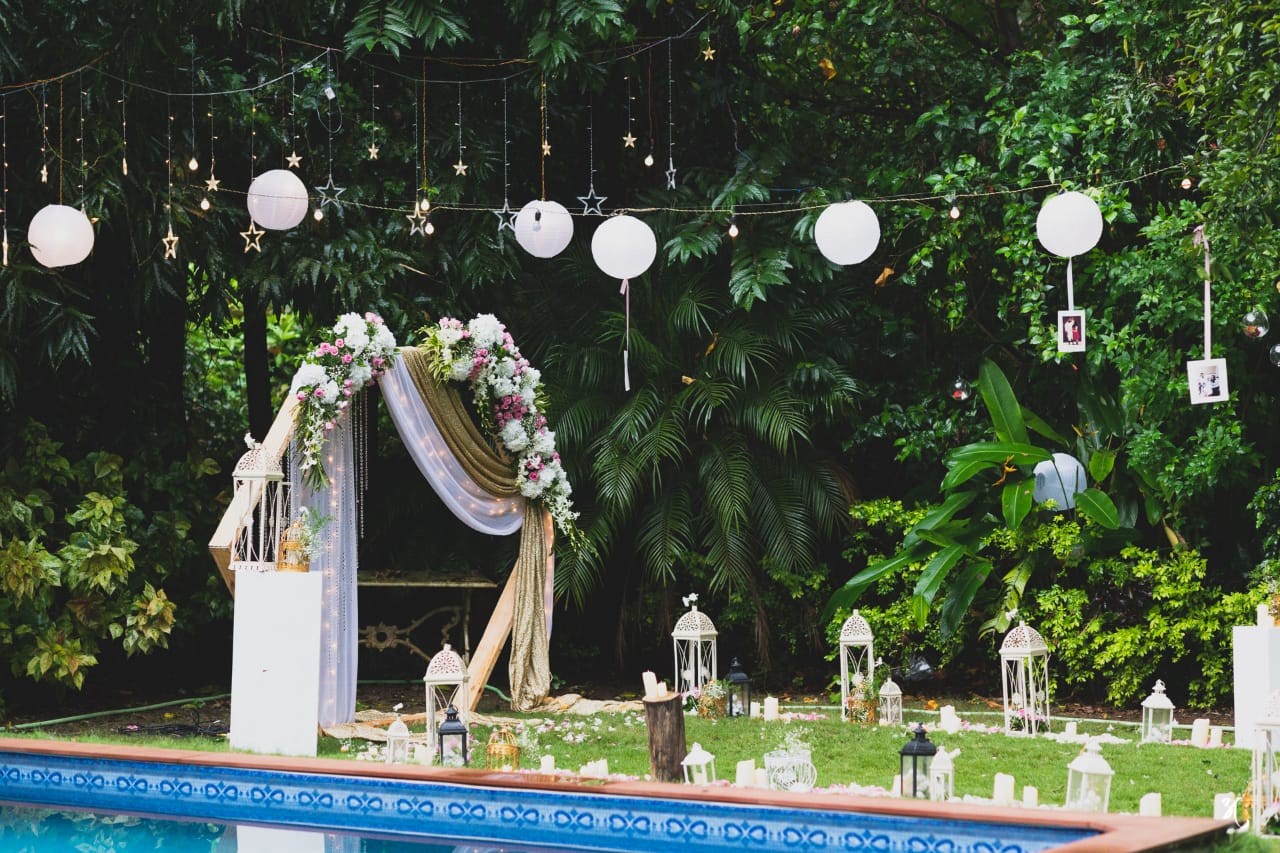 However, nature had other plans as the heavens opened up and poured down on the newly engaged couple. Far from dampening their spirits, the bout of rain encouraged the couple to have fun under the downpour.

Pooja shares, “Aman started planning this day three months ago and had even hired various planners so that everything could go ahead without a glitch. He’d booked a bungalow in Alibaug for the weekend and made sure that it was a pet-friendly place since Rio was also going to be there. I thought that it was just another weekend getaway and readily agreed to go with him. He also asked me to dress up as he had planned a romantic meal before we reached the bungalow. Little did I know that he had such a big surprise in store for me!”

“Meanwhile, my best friends took Rio in another car and were waiting for me at the bungalow. However, nature had other plans as a heavy downpour struck our plans and our friends were stuck on the jetty. Eventually, as we reached the bungalow, Aman quickly changed into his suit as I waited in the car for the rain to die down. But as I got out, he was down on one knee with Rio at his side in a cute little tuxedo. It was the most beautiful sight ever!”

“When I saw him there on his knee, drenched and smiling up at me, I couldn’t care less about the rains. I was so thrilled, that I forced him to step out with me while it poured and we danced, and he presented me with the ring again. Later, our friends joined us and we celebrated the occasion with a quick jump in the pool at the bungalow.” 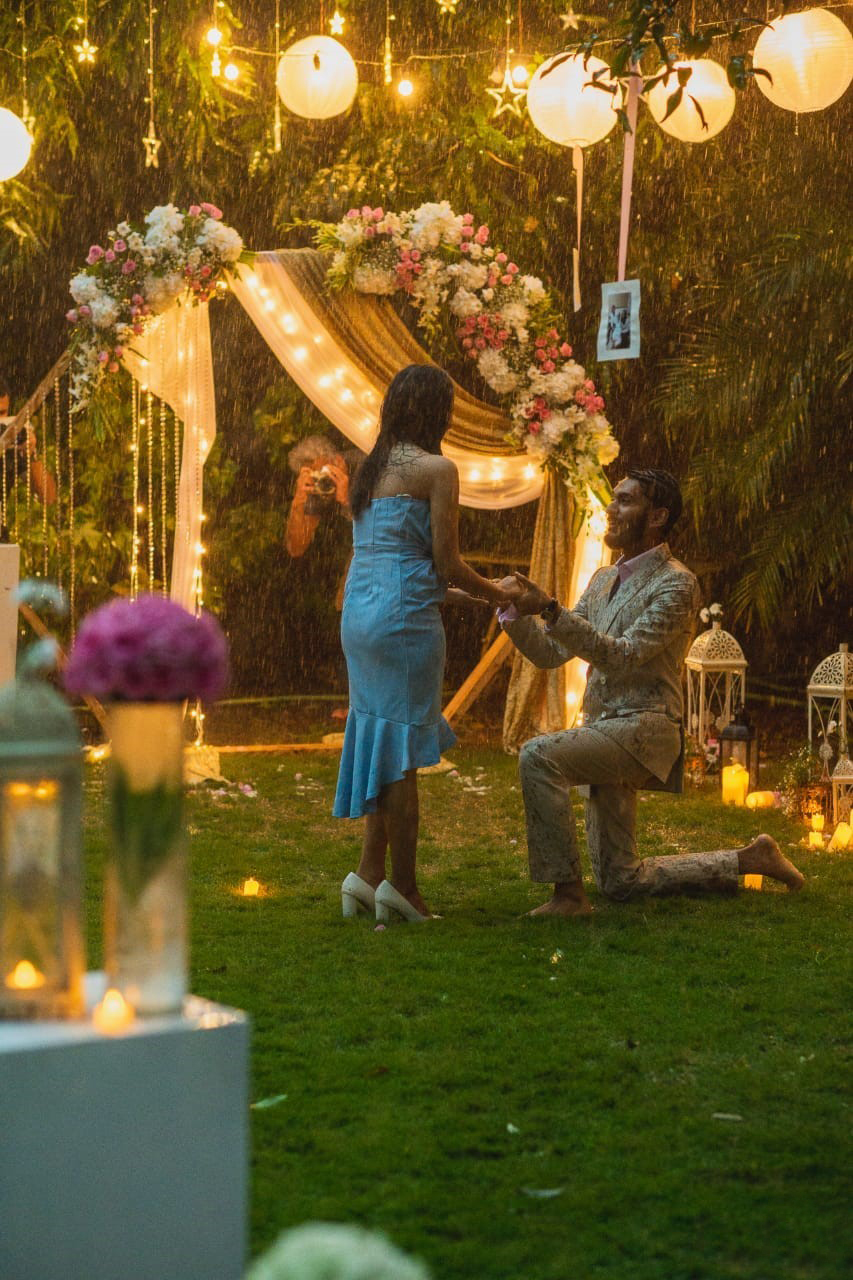 About a month and a half later, Pooja also popped the question to Aman by going down on one knee on the golden sands of the Thar Desert in Jaisalmer. She recalls, “Both of us have always made the effort to make each other feel special at every point in our relationship. So when we were slotted for a trip to Rajasthan a month and a half after Aman’s proposal, I found the perfect window of opportunity. I’d kept the ring ready and engraved with the date. To create a distraction I had booked one of those luxury villas in Jaisalmer which he thought was the surprise. However, that night, I also had a jeep hired for us both and three of our best friends. We went in the middle of the Thar Desert where there was a whole setup of sofas, lights, fireworks, drinks, and snacks. I proposed to him under the stars in the middle of nowhere, after which we all just sat there appreciating the beautiful night.” This entry was posted on Thursday, May 14th, 2020 at 3:35:02 pm and is filed under Wedding Proposals. You can follow any responses to this entry through the RSS 2.0 feed. Both comments and pings are currently closed.