Wedding Venue Hot Spots: Kanika recommends a Yacht out in the Arabian Sea

Kanika and Behzad Gazder (aka Gaz) live in Mumbai and both of them work in advertising. They met in 2010 and the sparks few instantly, soon they became best of friends, and eventually their friendship blossomed into love. Here, Kanika writes about her wedding planning experiences and the search that happened for the dream-wedding venue. 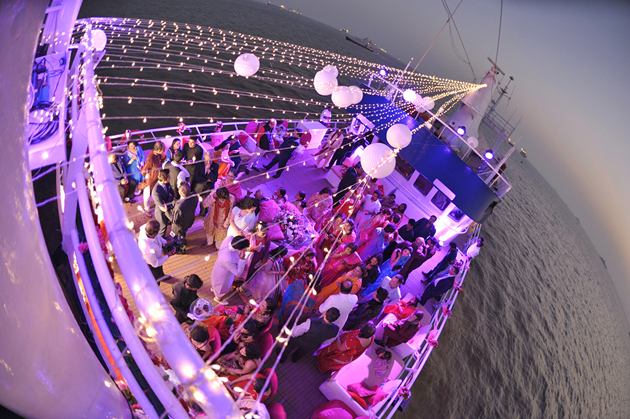 Wedding Planning & Venue Selection
We had been dating for nearly 4 years and were in no rush to get married. After all, it is said that why fix something that is not broken. But being a Marwari, my parents started really pushing for me to get married. At some level, Gaz and I also started thinking that maybe it was really time for us to tie the knot. We had been together for so long and we wanted to share that joy with our families and closest friends. And so began the planning. We shared the thought that our wedding should be intimate with only the most important people in our lives there. We decided that we would have a Marwari style wedding and keep as few functions as possible. So we agreed on a 3 function wedding split over two days. On the first day we had the Mehndi and Bhaat function in the morning and Sangeet & Reception in the evening, followed by our Wedding ceremony on the next day on the boat. 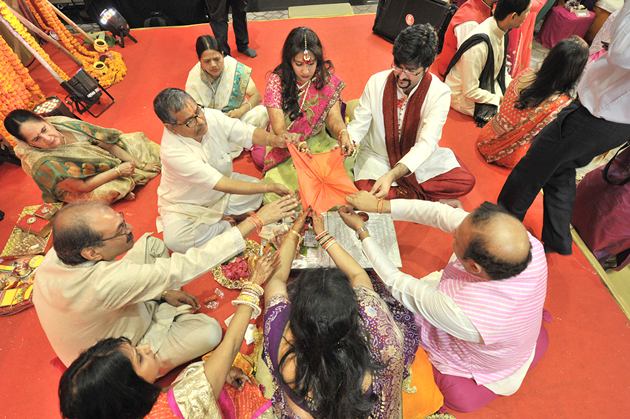 We began scouting for venues all over the city, but couldn’t find anything that really spoke to us. Eventually, each of the venues we confirmed happened by chance. We were at a family dinner at San Qi at the Four Seasons in Mumbai when we passed by a party hall which was the venue for someone else’s reception– right there we decided that Four Seasons was the perfect location for the Bhaat & Mehndi. The Sangeet & Reception took place at IMSC Dhanush in Navy Nagar (Colaba). We had actually gone to visit Sagarmatha opposite Afghan Church in Colaba but we lost our wayand we ended up at Dhanush in Navy Nagar- we loved the space and got really nice vibes and we decided this was it. 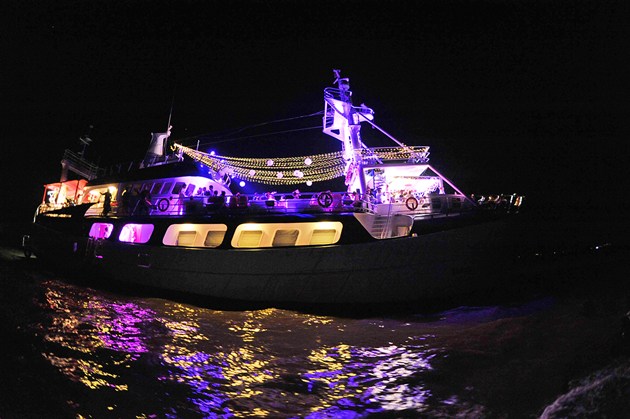 However, we were unable to lock in on the wedding venue. We considered the traditional venue choices like hotel ballrooms and gardens and even almost booked the Grand Hyatt in Santacruz. The night before we paid the deposit for the Grand Hyatt, my mother asked me if I was happy with the choice. When I said it was purely okay and not a dream venue, she sweetly told me to forget about the traditional venue and motivated me to think out of the box. That is when we decided to sit down and make a list of places we would like to get hitched. The most common theme that surfaced was the sea and ocean because our list was populated with ideas like the beach, on an island etc. At this point we started considering Goa as a strong potential location. However, we did not want to leave the city on our wedding day. By now, my entire family was a little irritated with us, and was telling us to pick a venue quickly. Then we chanced upon this company called Blue Bay Marine run by Gautam Bhatia and Meherzad Kajanwalla. I called them to enquire and luckily for us they said they have a yacht available on our day. We asked them to tentatively book it and then decided to go and do a recce. Since the yacht was undergoing maintenance, it wasn’t sea-worthy until a month before our wedding, so we had to go see it at Ferry Wharf– not as magical a place as it sounds. We took my parents to see the yacht, and we had to climb over 2 boats just to get to ours. It was in tatters – the paint was peeling and the flooring was ripped out. Ever optimistic and wearing the rose tinted love glasses, we didn’t care. We were just enticed by the concept of getting married out in the Arabian Sea. The 100 pax limit of the yacht was just an added benefit as now we could keep it intimate and small. My parents however had their reservations, as it was too small. The buffet would have to be limited, how would guests manage to climb aboard? ‘It would not be a very classy affair and so on and so forth’. But a mom is a mom and when she saw how excited I was, she relented. And thus the wedding preparations began. 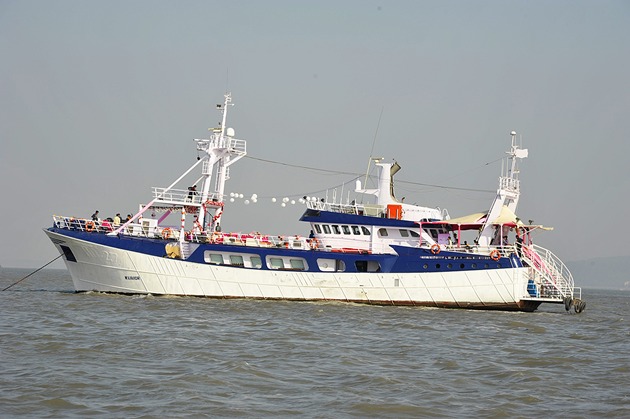 We went through the empanelled caterers and decorators on the yacht’s panel and felt that they were not what we wanted. Thus we empanelled a caterer and decorator of our choice- Flamboyante for catering and Vivaah (run by Rachana Lucknowala) for the decor. 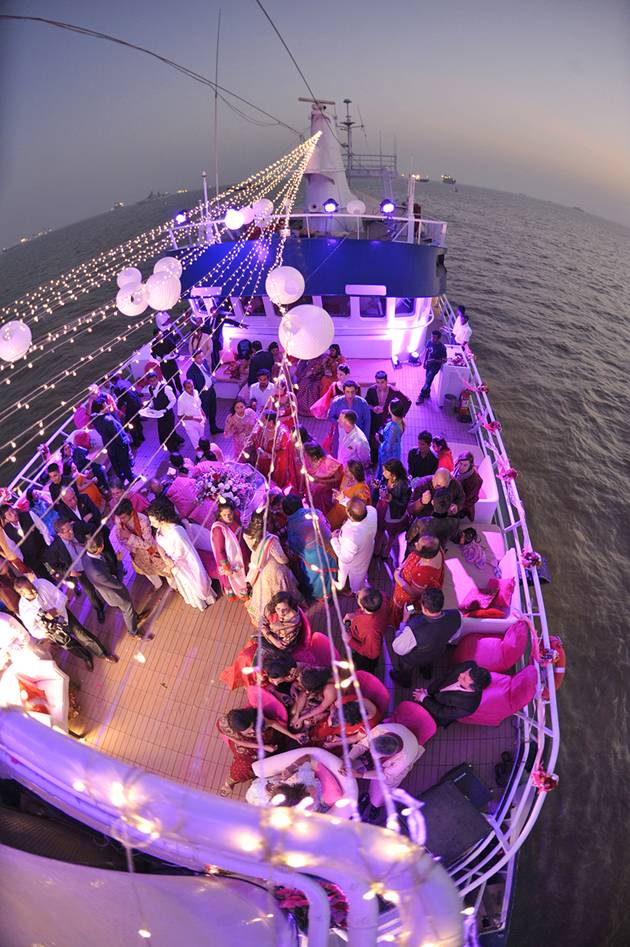 Gautam and Meherzad of Blue Bay Marine went out of their way to ensure that everything was better and more. Their entire team were super-efficient, at their insistence we met them only one month in advance to share our vision, and then a week before the wedding to ensure it was all going well. They managed everything spectacularly and went above and beyond the call of duty to ensure that our big day would be perfect! In fact, the truest way of describing Gautam & Meherzad’s efforts would be to say that they were working not on a client’s wedding, but on a family wedding! 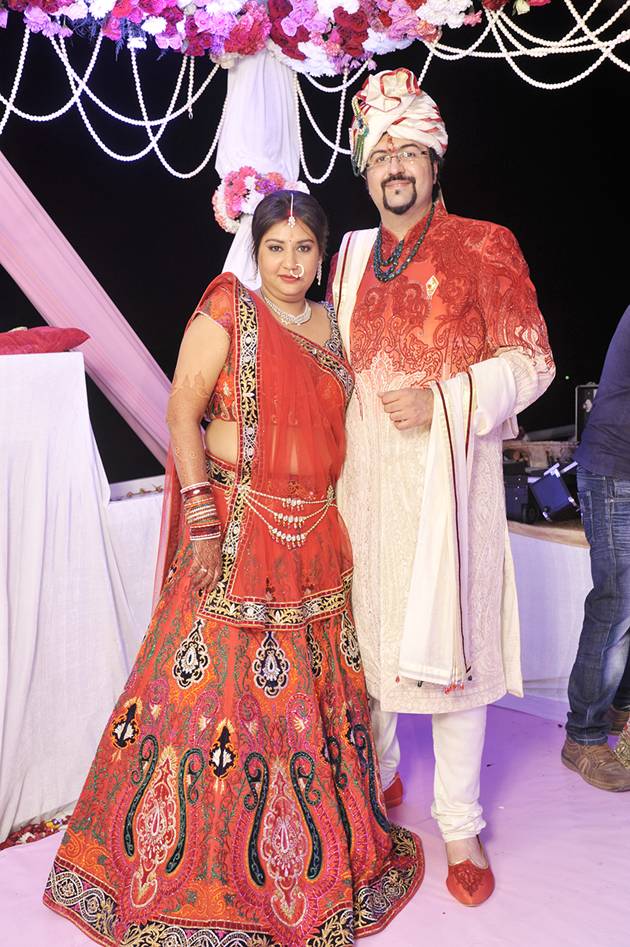 Advice for to-be-weds
In all honesty, planning an offbeat wedding can leave you extremely unnerved at times. There are moments when you really doubt that things will pan out the way you want it to. There are moments when you seriously consider throwing in the towel and running back to a more tried and tested venue. After all, your wedding is not something you want to mess up in an effort to do something spectacular. But, and yes there is a but, if you are clear in your mind and have a vision, go ahead and give it a shot because it is truly worth it in the end. 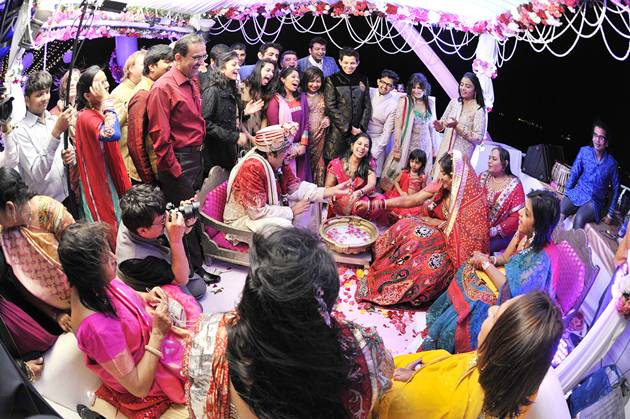 Our blog post series ‘Wedding Venue Hot Spots’ features Real Couples and their search for the perfect venue. If you got married recently and would like to be featured here please email us a few wedding photos along with the details below. Our Editors will review the same and get in touch with you for a more detailed interview:

– Your Names and where you live
– The Wedding Functions, Date(s) and Venue & City

This entry was posted on Wednesday, September 3rd, 2014 at 7:44:15 am and is filed under Wedding Planning. You can follow any responses to this entry through the RSS 2.0 feed. Both comments and pings are currently closed.