Are Sid and Vid getting engaged?

There’s much talk about this Bollywood connection. Siddharth Roy Kapur, CEO of UTV Motion Pictures has been seen with actress Vidya Balan on many occasions, but the couple have not spoken about their relationship. Now there’s speculation that 37 year old Siddharth and the talented actress may be getting engaged soon, though reliable sources tell us that news on the engagement is just a rumour.

If Siddharth marries Vidya, this will be his third marriage. Siddharth is often interviewed and seen on TV, but not much is known about his personal life. The good-looking and talented corporate head-honcho schooled at GD Somani Memorial school and lived next door at Jolly Maker Apartments in Cuffe Parade where his mother Salome Roy Kapur, a former Miss India ran a Western dance academy. Siddharth completed his graduation from Sydenham College, and MBA from Jamnalal Bajaj. He began his corporate career with Procter & Gamble, and then realised his passion lies in Marketing Films & Entertainment, so he quit P & G to join STAR TV after which he moved to UTV. Though Siddharth’s father an Army officer turned businessman, had no connection with films, all his other family members have a Bollywood association. His paternal grandfather was a Producer while his mother choreographed the dances for some of the biggest films in the 70s. Aditya Roy Kapur of Guzaarish and Action Replayy fame is his youngest brother and younger brother Kunal is active both in Theatre and Films.

Siddharth’s first wife was his childhood sweetheart and second wife who he separated from three years ago, was a Television producer. While there may be much speculation about this B-town couple, we guess the couple will tread cautiously and if and when the engagement and shaadi happens, it will be a quiet and low-key affair. 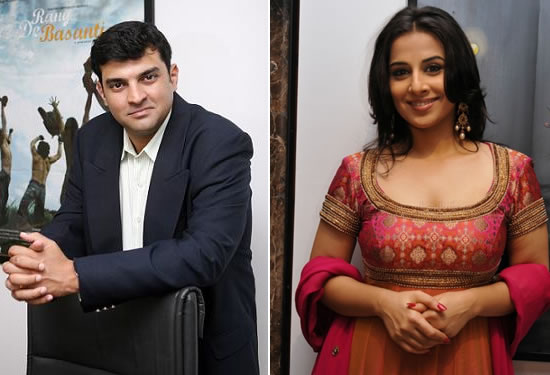 This entry was posted on Wednesday, February 23rd, 2011 at 1:09:04 am and is filed under Celebrity News. You can follow any responses to this entry through the RSS 2.0 feed. Both comments and pings are currently closed.