Bowled over! Wedding Style from the stars of Indian cricket

In their uniforms, on the field, representing their country, Indian cricketers show their style with their sportsmanship and skills, their ‘staches and their shades. But off the field, our Men in Blue make fashion statements that are individualistic and interesting while their wives up the grace and glamour quotient.

On the occasion of Ravindra Jadeja’s wedding this weekend, we look at what these stylish couples wore to their own nuptials.

Rohit Sharma and Ritika Sajdeh
Rohit Sharma fell for his sports manager of 6 years, the beautiful Ritika Sajdeh. He popped the question at the Borivali Sports Club, special to him because he began his career there. Engaged on the 3rd of June 2015 and married on the 13th of December that same year, the wedding and grand reception took place at the poolside of Taj Land’s End, Mumbai.

Rohit wore a white and gold Raghavendra Rathore sherwani with a bright pink bandhani paghdi to the pheras which perfectly offset bride Ritika’s mint and blue lehenga. He switched to a dapper tailored black suit by Troy Costa for the reception.

Suresh Raina and Priyanka Chaudhary
Star batsman of the Indian cricket team, Suresh Raina married his childhood friend and long time sweetheart Priyanka Chaudhary, on the 3rd of April 2015. The pre-wedding ceremonies began on the 1st of April 2015. The engagement ceremony was a low-key affair hosted at Suresh’s Ghaziabad residence. He looked dapper in a white kurta under a red jacket.

Suresh’s friend and famous restaurateur, Priyank Sukhija, hosted a bachelor party for him at his own venture, Lutyens Cocktail House, New Delhi, on the 2nd of April 2015 where they partied with celebrity guests including Bollywood actor Arjun Rampal and model Zulfi Syed.

A lavish, very private wedding arranged by Suresh’s mother was held at The Leela Palace, Delhi to which the groom donned a golden sherwani and Priyanka looked absolutely stunning in a traditional red lehenga.

Then the couple exchanged vows at a church ceremony on the 18th of August to which Deepika donned a gorgeous Reem Acra white bridal gown with a lace bodice and baby-pink veil. The groom looked dapper in a three-piece suit. 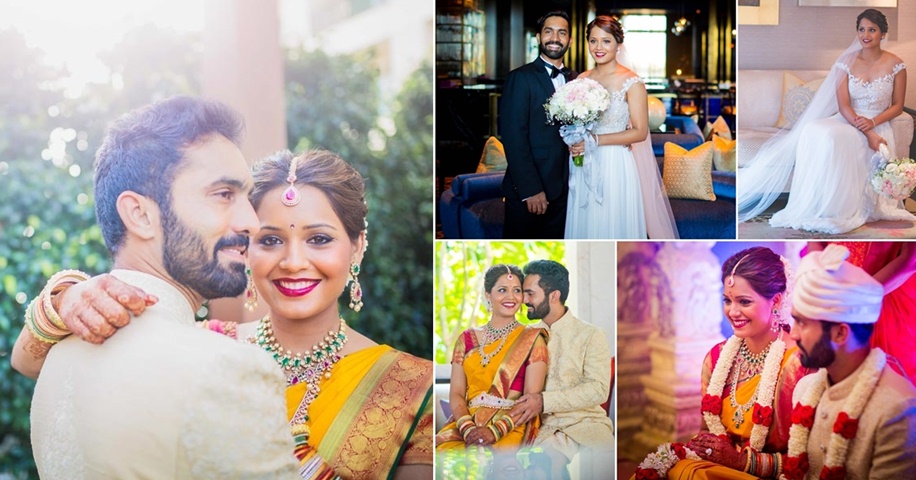 Harbhajan Singh and Geeta Basra
After much will-they-won’t-they, the Indian cricket team spinner Harbhajan Singh married actress Geeta Basra on the 29th of October, 2015. A lavish wedding in the groom’s hometown of Jalandhar was followed by an equally grand wedding reception on the 1st of November 2015.

The fashion watchers were not disappointed!

Geeta’s choice of a lime-yellow lehenga paired with a pink crop top, embellished with antique silver work and sheer sleeves by Archana Kochhar complete with an unconventional mathapatti delighted those wondering about her mehndi look.

For the Chuda ceremony she wore a fishtail lehenga in tangerine coutured in special ahimsa silk by Archana Kochhar. At the sangeet, the actress dazzled in an emerald green lehenga with hints of gold designed by Babita Malkani while Harbhajan complemented her in a light pink kurta and deep pink bandhgala by Raghavendra Rathore.

Mohit Sharma and Shweta Jaiswal
Indian cricketer Mohit Sharma married his longtime girlfriend Shweta at the Leela Palace in Delhi on the 10th of March 2016. From Kolkata originally, Shweta is pursuing a Hotel Management degree there. Sharma dressed in a traditional beige and red sherwani while Shweta looked stunning in a beige and green lehenga accessorized with traditional jewellery. Cricketers Unmukt Chand, Virender Sehwag, Parwinder Awarna and Joginder Sharma attended the ceremony. 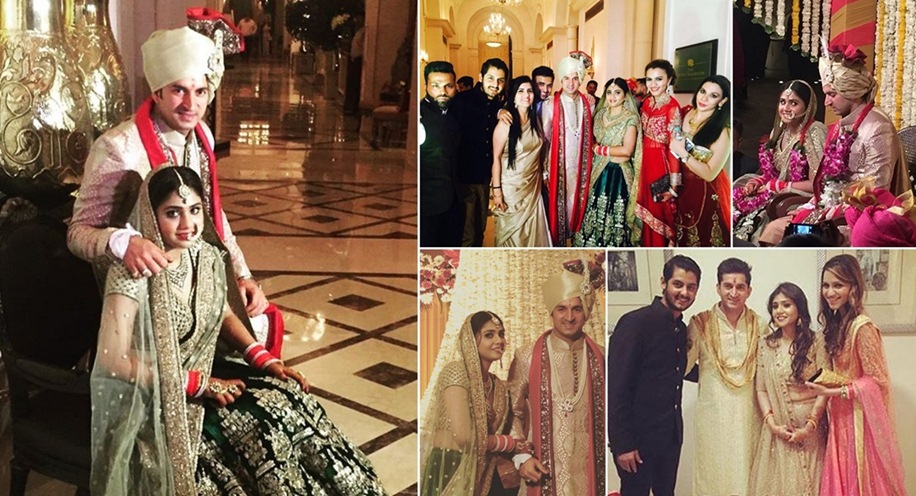 Ajinkya Rahane and Radhika Dhupavkar
India batsman Ajinkya Rahane married his childhood friend Radhika Dhupavkar at a glittering Maharastrian wedding in Mulund attended by the couple’s close friends and family. Radhika wore a gorgeous yellow and green paithani with the traditional nath while Ajinkya chose to dazzle in a gold sherwani with green churidar and stole. 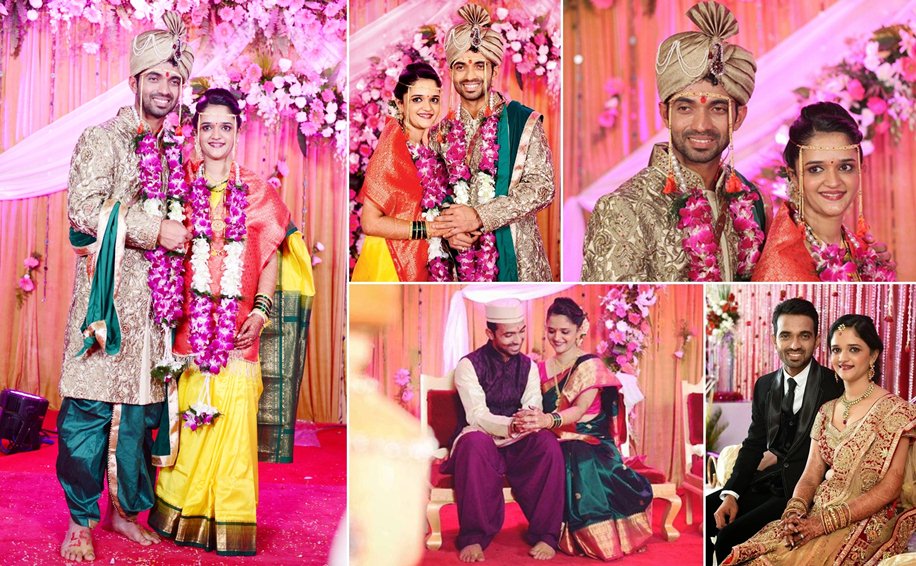 Shikhar Dhawan and Ayesha Mukherjee
Man candy, Shikhar Dhawan met Bengali-Australian beauty Ayesha Mukherjee on Facebook where long conversations soon led to a budding friendship. The couple celebrated with a traditional Sikh wedding, attended by many cricketers including eligible bachelor Virat Kohli who let it all hang out and showed off his dance moves at Shikhar’s baraat. Dhavan wore a cream sherwani and Ayesha was resplendent in an embroidered gold and fuchsia lehenga. 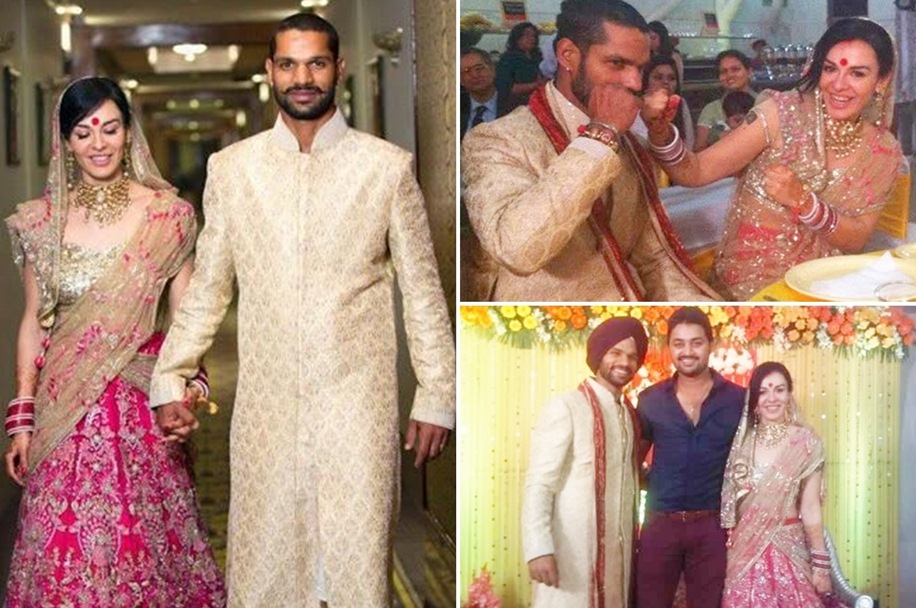 Mahendra Singh Dhoni and Sakshi Rawat
Captain of the Indian cricket team, the impressive MS Dhoni met his future bride as a childhood friend before they went their separate ways. Fate reunited them and they were engaged on the 3rd of July 2010 at Hotel Competant in Dehradun. It was all fireworks at their 4th of July wedding in 2010 hosted at Vishranti Resort in Bidhauli near Dehradun. Sakshi chose a Sabyasachi lehenga in red and green. Dhoni wore a blue sherwani. The couple’s friends, including luminaries from the fields of sports, politics and film, celebrated the marriage. 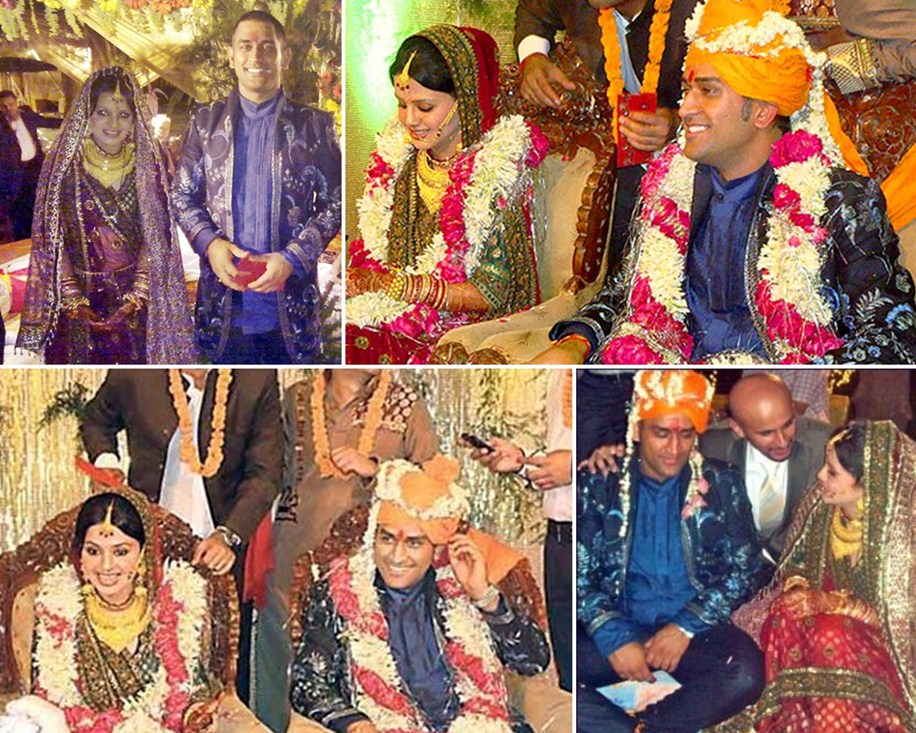 Ashish Nehra and Rushma
Indian cricket strike bowler Ashish Nehra married Rushmi on the 9th of April 2009 in Delhi. Keeping it intimate and close knit, the bride wore a pretty pink and gold lehenga to the wedding while Ashish decided on a glitzy blue sherwani with a red saafa. 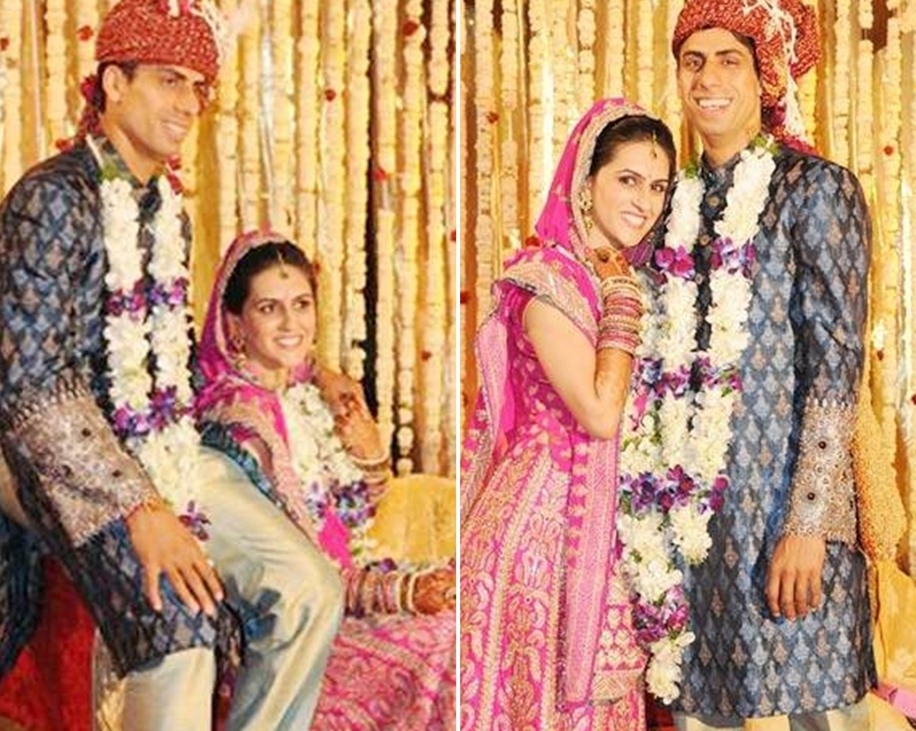 Robin Uthappa and Sheetal Gautam
Cricketer Robin Uthappa married tennis player Sheetal Gautam on the 3rd of March 2015 after a long courtship. The couple had a Christian wedding ceremony to which Sheetal wore an embellished bridal gown while Robin sported a navy blue tuxedo. For the reception, Sheetal picked a lovely pink Sabyasachi lehenga. Robin complemented her in a green velvet bandhgala.

Gautam Gambhir and Natasha Jain
Kolkata Knightriders’ Captain Gautam Gambhir tied the knot with his childhood sweetheart Natasha Jain in October, 2011 in a private ceremony at Westend Farm on the Delhi-Gurgaon road.

Tarun Tahiliani was the couturier of choice for both bride and groom to the wedding. The genius of ace designers Shantanu and Nikhil and Sabyasachi were also enlisted to create wedding wardrobes for the family. The wedding was attended by the who’s who of cricket including Virendra Sehwag and his wife Arti, Juhi Chawla and her husband Jai Mehta, Yuvraj Singh, Rahul Dravid, VVS Laxman, Ishant Sharma, Munaf Patel and Ashish Nehra.

This entry was posted on Friday, April 15th, 2016 at 5:44:47 pm and is filed under Celebrity News. You can follow any responses to this entry through the RSS 2.0 feed. Both comments and pings are currently closed.