This Eiffel Tower Paris Proposal will give you the Feels!

One of Paruul’s notes to Steven was an affirmation, “Go to Paris and kiss under the iconic Eiffel Tower”. The girl from New York met the boy from Seattle and their gorgeous story about instant attraction, long-distance love, dear friends and the sweetest wedding proposal will leave you with tears in your eyes.

She tells us how it all panned out.

“I met Steven in Seattle, on a business trip from New York. We were both on a dating app – Coffee Meets Bagel – and matched two days before I was leaving Seattle. Our first date was incredible. It felt so easy to talk to him. We got drinks, played pool and listened to good music. I wanted to keep seeing him, but it was our first date and we lived on opposite sides of the country. I told him “Oh, I come to Seattle all the time,” which was a little bit of a lie and he told me he was planning to come to New York in two weeks. Because of that, we kept texting and eventually calling each other over the next few days. When he came to New York it was an awesome weekend. However, he told me that he was planning to leave the country after two months to take a Fulbright grant to teach abroad and was saying goodbye to his friends and family.

On his last day in NY, we were considering whether or not to be in a serious relationship – we had only met in person twice, he was leaving the country in two months and would be gone for a year. Nonetheless, we decided to fully commit to a relationship and in the two months, before he left, we made a total of six trips to see each other on opposite coasts. I invited him to meet my family, and I met his family for just that much time. After he left the country, we were put through the trials of long distance. We went through 10 months of living in time zones 13 hours apart, trying to call each other over crappy WiFi signals, and working through missing someone we had basically just started dating.

When he came back I was so relieved. He was able to stay in the NY area for a few months as he looked for jobs, but after a few months, he ended up returning to Seattle for a position he secured at Amazon. This time we were doing long distance again without a set date for when it would end, which really worried me. After a few more months, I considered moving to Seattle since it was a good time to make a move professionally as well as personally. I ended up getting an interview at Amazon in Seattle that eventually turned into a full-time offer. In November of 2017, I moved there and we ended nearly two years of long distance.” 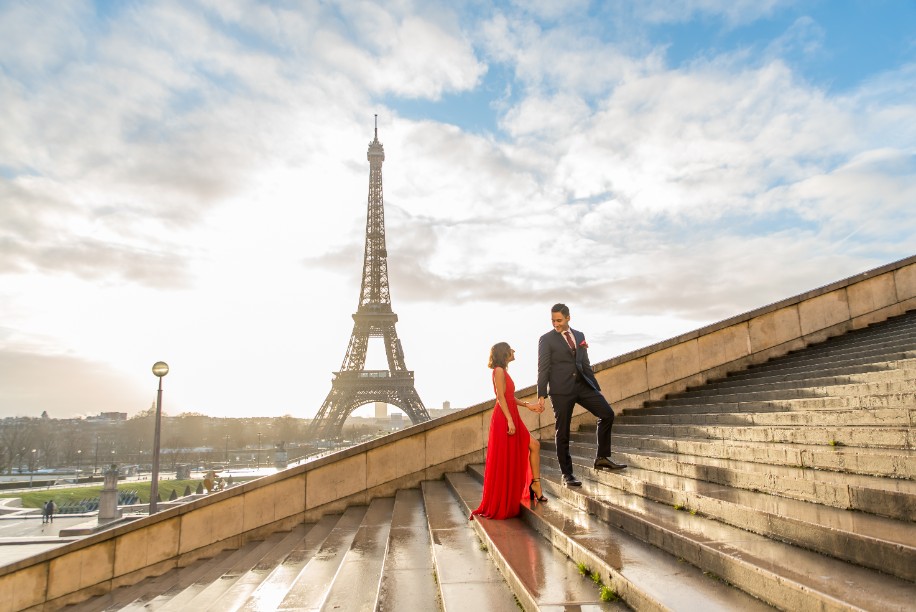 “Steven and I had talked about getting engaged sometime in 2018 but obviously didn’t know when, where or how it would happen. I travel for work often and I mentioned to him late last year (November 2017) that I may have to go to Paris for a team summit. I tried to convince him to join me for the second half of the trip since we had never been to Europe together but he said he wouldn’t be able to get out of work and that was that. What I didn’t know was that the moment I told him about Paris, he started planning the proposal.

In December, Steven told me to buy a fancy red dress before the New Year and keep it with me at all times in 2018 (on every work trip and every trip back home to Jersey) because “you never know” he kept saying. I don’t wear red often, almost never, but I happened to find one that I loved. So I started packing it with me everywhere I went the past several months – mostly because the dress was beautiful and I knew it was important to him. He hinted about something special happening in Hawaii in the spring so I thought he was just trying to throw me off with all these distractions.

A few weeks before my Paris trip one of my best friends, Mallika, asked if she could crash my trip because she had “extra airline miles and vacation days” she wanted to burn. We always do spontaneous things like taking trips or last-minute concerts so I didn’t think too much about it. Before our trip, she told me she was looking into fun things for us to do in Paris including a photo shoot at the Eiffel Tower. I thought it was a bit odd but didn’t dwell on it.

In Paris, the weekend before Valentine’s Day, Steven told me he was on a ‘bros trip’ in Seattle and sent me some convincing pictures with his friend (who was also with him in Paris). The night before the photoshoot, both Mallika and Steven kept asking me if I was going to wear the red dress for the photoshoot that she had organized for Sunday morning which I thought was a little suspicious, but Mallika made it clear that Steven had not mentioned anything to her and she was really excited for it and had already paid for the shoot.

Sunday morning came and the photoshoot was at 8 am! It was way too cold, too wet, and too early, to be wearing a red dress for a photoshoot. I looked up the photographer and found that he mostly did engagement photoshoots and kept telling Mallika that it was super awkward to just have a girls photoshoot. Even with all these thoughts, I put on the red dress and went with her to the Trocadero which overlooks the Eiffel Tower.

We met the photographer and he started to take pictures of us. A few minutes into the shoot, the photographer walked up to me and handed me a card addressed from Steven to me. I knew at that moment that he was there and it was happening. Hands shaking from cold and nervousness, I opened the card and inside were notes I had written to him a while ago about things we would do together, as a way to overcome our time doing long distance. One of the notes that I forgot I wrote was “Go to Paris and kiss under the iconic Eiffel Tower” which he included in the card.

As I read through the notes, I kept dropping the card out of sheer nervousness. At this point, Steven was already coming up the stairways behind me. I turned around and saw him walking towards me knowing that he was about to pop the big question I never saw him get emotional before so when I saw him getting choked up, I naturally choked up too. He got down on one knee and told me he didn’t want to chase me around the world anymore (me too!) After he proposed, his friend and Mallika came to hug us and celebrate while the photographer that Steven actually organized kept snapping pictures.

After the photoshoot, Steven told me we were all going to a restaurant to celebrate so to keep the red dress on. When we walked in, I had to do a double take because the room was full of close friends from Seattle and New Jersey who had traveled all the way to the city of love to celebrate with us. I was beyond shocked and so grateful to have all these amazing people in my life. The rest of the day was spent eating, drinking and celebrating what will be the most important day of our lives. I knew Paris would be great but it turned out to be truly incredible all thanks to Steven and our friends.” 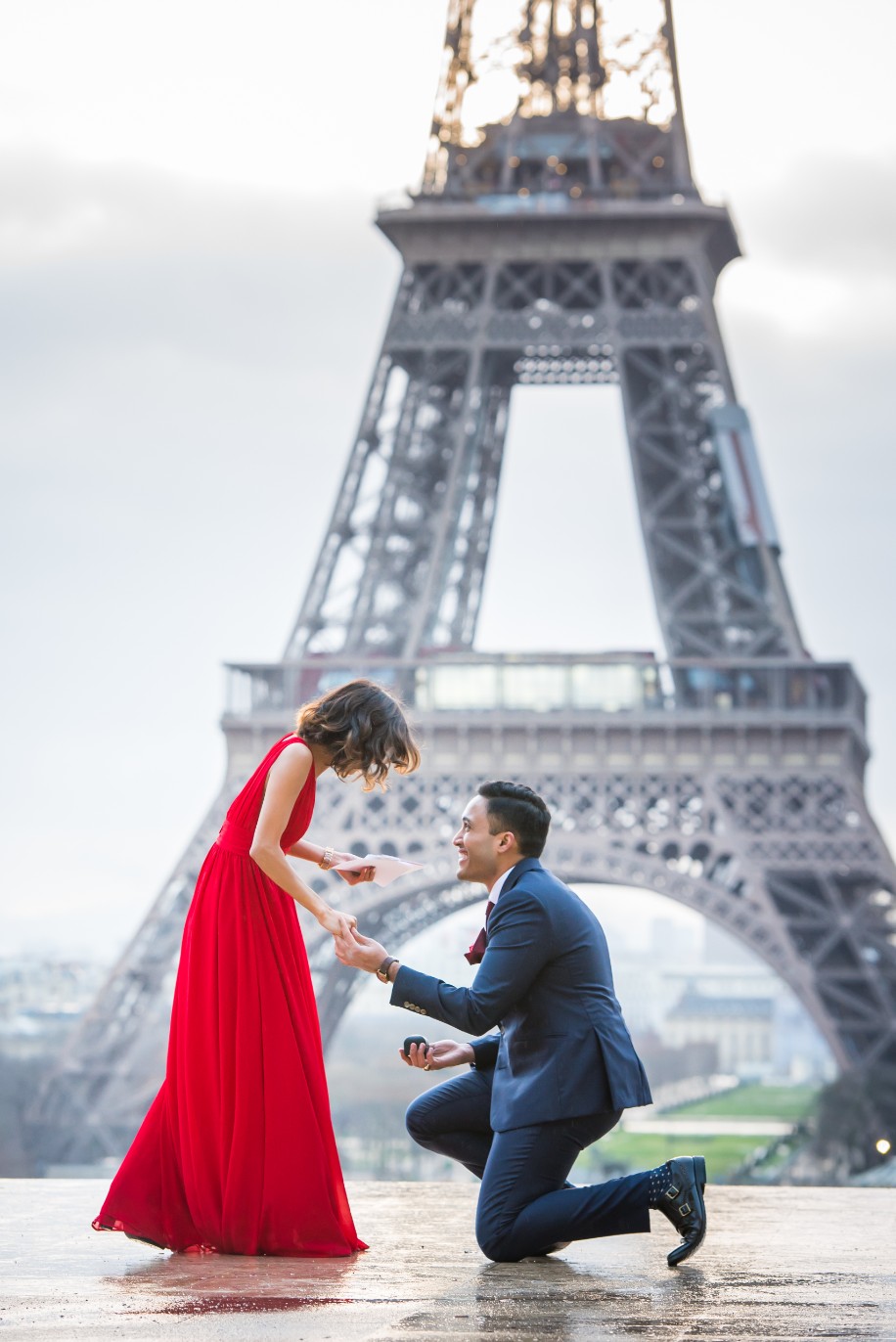 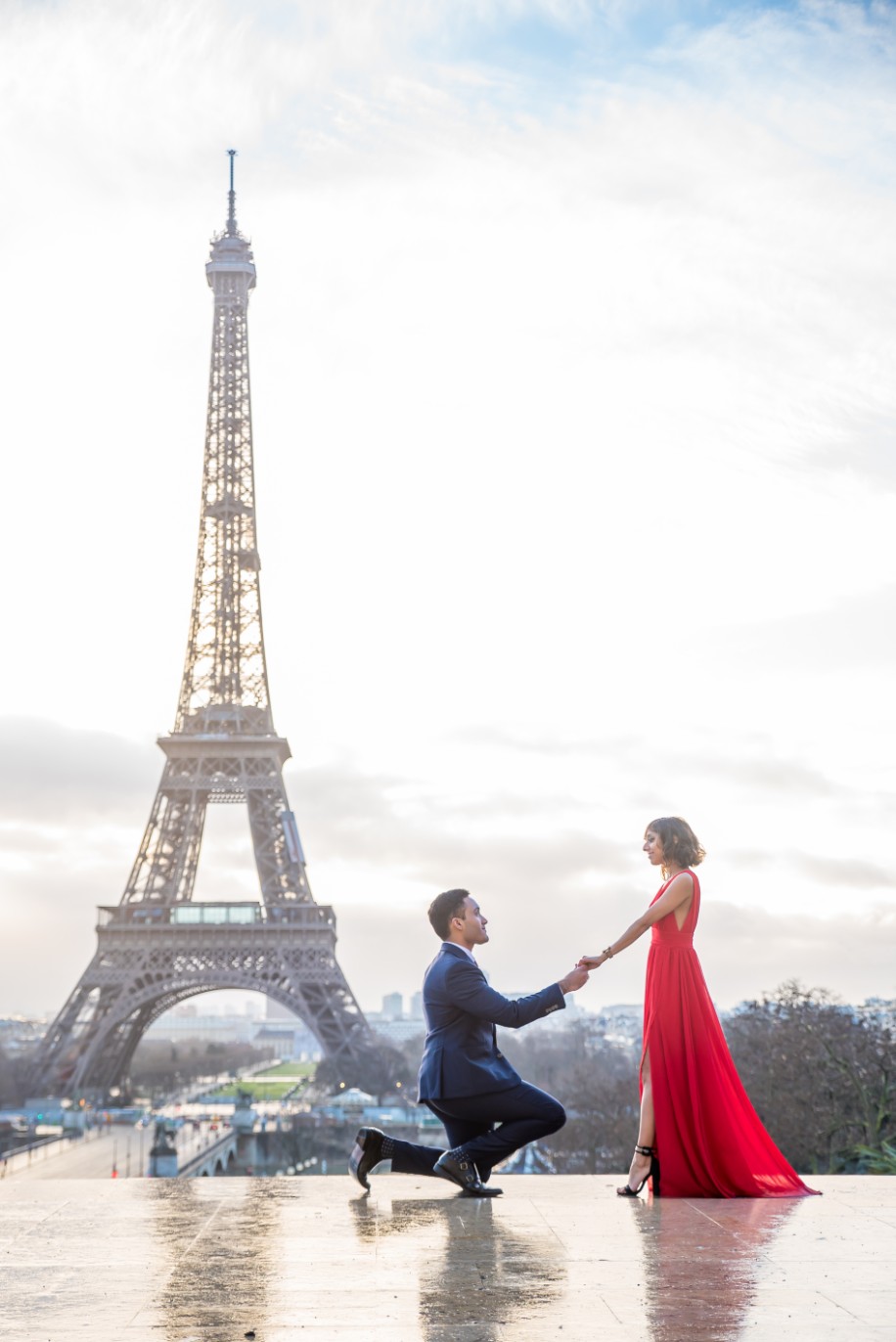 This entry was posted on Monday, August 20th, 2018 at 2:58:02 pm and is filed under Wedding Proposals. You can follow any responses to this entry through the RSS 2.0 feed. Both comments and pings are currently closed.