Be a good ally to your LGBTQ+ couple friends.

The past few years have yielded both small and big victories for the LGBTQ+ movement; victories that may have seemed impossible earlier. As the revolution turns into evolution, members of the community are taking their rightful place in the sun – across pop culture, the professional world and public life. This welcome change is a great opportunity for learning and understanding especially for those who are unwaveringly accepting of the community, but who may worry they’ll say or do something awkward despite their best intentions.

We spoke to a few LGBTQ+ couples on behalf of those who want to show their support and would like an insider’s perspective on how to be a true ally.

Abstain from prying into their past
In a society that perceives heterosexuality as the norm, coming out is an experience that can range from liberating to excruciatingly painful. There’s a very high chance an individual may not wish to speak about it in public. In fact, it’s best to remember that a formal declaration of your sexuality is not at all part of regular social interaction so wait for your friend to come out to you – rather than speculate or ask.

Amit explains, “Technically speaking, I never came out to anyone because I don’t believe in the concept. Straight people aren’t expected to do so. In my opinion, the act only validates the notion that being gay is something that one needs to come to terms with. My family always knew exactly who I am and accepted me in the same way.”

Don’t ask what you can simply Google
We all understand that it is not appropriate to ask someone for details about their sex lives. Curious about how ‘the other half’ gets it on? Well, ask the Internet, not your LGBTQ+ friends.

Amit says, “What goes on behind closed doors is a private matter that should only concern us. Asking about it defies basic social etiquette.” The rule of thumb is – if the same question would not have been asked of a straight couple, it should not be targeted at anyone else. Find a sex-positive, well-researched website and save your friends the emotional exhaustion (and awkwardness) of answering invasive questions.

Escape the traps of gender binary bigotry
Members of the LGBTQ+ community often have a more complex relationship with conventional notions of masculinity and femininity. Yet, one of the questions that homosexual couples get asked most frequently remains, ‘Who is the man and who is the woman?’

Amit explains why the question itself is ignorant, “No one really questions which chopstick is the fork. The question presumes that same-sex relationships can only work if they follow the hetero-normative template. We should actually be asking why anyone should need to be seen as a man or woman.” Bringing to light on an entirely new dimension on the matter Arnab Biswas says, “I have been asked if I would gradually transition to a girl! Heteronormativity is such a deep set concept that some cannot fathom what it means to choose a same-sex partner. From time to time we’re met with some amusing and some annoying questions, however, I believe it’s our responsibility to educate those who ask without losing our temper or getting upset.”

Rahul says, “What they really want to know when they ask this is which one of the two is feminine but that doesn’t make someone a ‘woman’. Also unlike what a lot of people may presume, the one who is feminine could also be the alpha.”

In addition, the scope of such questions is very limiting and leaves no room for the representation of members of the community who may identify as non-binary, gender fluid and so on.

Don’t confuse gay men with fashion stylists
Yes, we all watched Queer Eye, but the LGBTQ+ community is far more diverse in interest and talents. Members are represented across the board from government to gourmet restaurants, medicine to music.

In fact, an outdated perception of the gay man as a flamboyant, stylish, looks-obsessed cliché displays the community’s lack of realistic representation in pop culture – feeding stereotypes. Rahul says “Pop culture tends to present gay men as femme and fashion-mad. Many of us don’t really care about fashion. Like any other group of people, we have different interests. So don’t come to us for validation of your wardrobe choices. Some of us may have an opinion you may not like!”

Refrain from making their orientation their identification
‘Gay’ isn’t a comprehensive identity or personality type. When you refer to a friend as your ‘gay best friend’ or ‘a gay couple’, you’re revealing your own inability to see beyond their sexual orientation. Human beings are faceted and multi-dimensional and if your gay friends called you ‘my straight best friend’ it would sound pretty weird too.

“Our preference in partners does not define us. We’re more than that,” says Clinton, “If you and I get along well then it makes me your regular best friend. As human beings, we’re a sum of many different parts and using ‘gay’ as a title when referring to us takes all of that away.”

LGBTQ+ isn’t a ‘look’
“But you don’t look gay,” is probably the most meaningless, avoidable response to someone coming out to you. Again, it gives weight to LGBTQ+ stereotypes.

Clinton says, “We come in all shapes, sizes, and colors and have our own unique personalities – just like everybody else. There is no definitive look that comes with being LGBTQ.”
You want to show total acceptance? Kick all preconceived notions of what the community is to the curb and re-iterate to yourself that someone’s sexual orientation is not their entire identity, a set of mannerisms or a fashion choice.

Let normalcy be the norm
When around LGBTQ+ couples, the only thing to keep in mind is to not keep in mind that they’re LGBTQ+. All they need from their peers is to be treated like any other couple. Arnab Biswas says, “Nonchalance is what I would expect from people when they realize that my partner and I are in a relationship. Reactions on such matters are a cause of the heteronormative belief systems that exist in our society. The moment we broaden our perspective and let go of traditional expectations of sexuality, preferences of the LGBTQ+ community will cease to surprise everyone.” 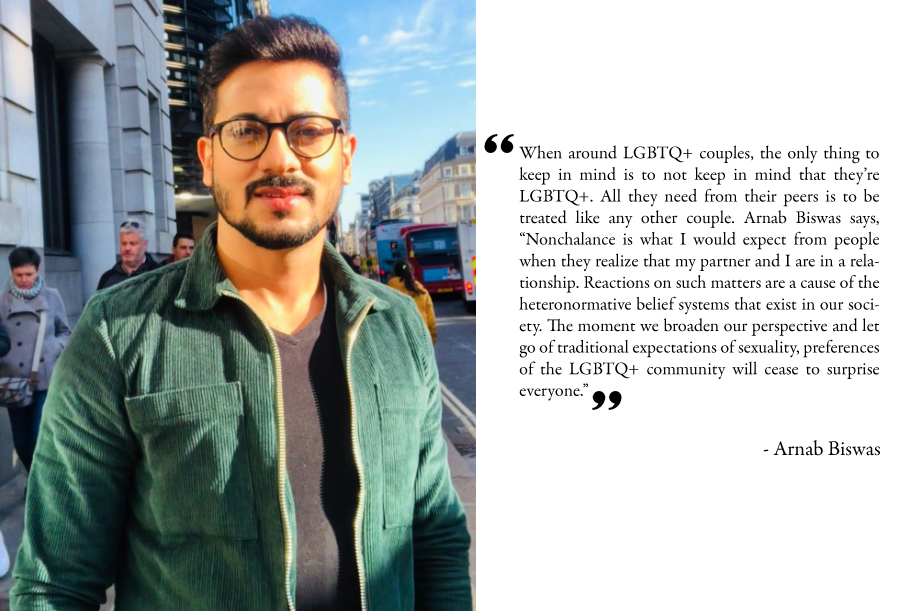 There are, of course, a few steps one can take towards being an ally and making it easier for them to be comfortable in social settings. Clinton says, “Small things like, not (even if it’s enthusiastically) freaking out if an LGBTQ+ couple is holding hands, the same way you wouldn’t care if a straight couple was holding hands; or not assuming we know or don’t know sports/ fashion/ anything stereotypical. If you hear or see someone being naively homophobic, try to educate them. If someone identifies as non-binary, or transitioned, use their preferred pronouns.”

Support their cause
Indian society today is evolving at a fundamental level. LGBTQ+ identities may be acceptable to more of the country’s youth than ever before. However, within the boundaries of traditional setups such as homes, schools and so on, open dialogue about sexuality (hetero-normative and otherwise), gender spectrums and preferences, etc., still remains a struggle. In these potentially conservative settings, it is even more important to gently, productively broach the topic.

Rahul suggests “We should all, on humanitarian grounds, try to spread as much awareness both, among upcoming generations as well as the one that precedes us. Make it ‘normal’ to discuss gender with kids, peers, colleagues parents, friends, and family. For those of us who are members of the community – it is our duty to set an example and share our experience until the day comes when we don’t need to, until the day acceptance is the new normal.”

*Some names and identifying details have been changed to protect the privacy of individuals.

This entry was posted on Tuesday, June 25th, 2019 at 5:21:51 pm and is filed under Love without Borders. You can follow any responses to this entry through the RSS 2.0 feed. Both comments and pings are currently closed.