Indian Royalty & the Romance of Platinum

Jewels were the Maharajas best friends. Every blue blooded royal had vaults full of jewels with cascades of Golconda diamonds, Kashmir sapphires, Burmese rubies, Colombian emeralds and Basra pearls in the most magical settings that would take your breath away. And usually the best pieces were reserved for men! 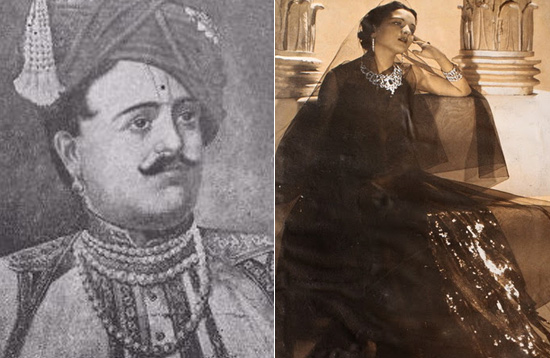 Chhatrapati Rajaram of Kolhapur, earliest known buyer of platinum jewellery in India and Princess Sita of Kapurthala, one of the best dressed women in the world in 1920-30s, wearing a large diamond necklace by Cartier.

This passion for jewels led to occasional contacts between Maharajas and the European jewellers in the nineteenth century- like the English jeweller Hamilton in Calcutta. However, this interaction was quite limited. Chhatrapati Rajaram 1st of Kolhapur was one of the first Indian princes to visit Europe in 1869-70. He is known to have bought enormous quantities of Belle Époque jewellery including chains and pendants set in platinum. This is the earliest recorded reference of purchase of platinum jewellery by Indian royalty.

By 1910-1920s, more Indian Maharajas became enthusiastic buyers of platinum jewellery from European jewellers. The stones would be from the princes private hoards, but the settings and designs were created by European jewellers. Newly rich states like Patiala, Baroda, Indore, Kapurthala, Jamnagar and Cooch Behar commissioned the jewellers to create the most spectacular pieces.

The famous cricketer Ranji, Maharaja of Jamnagar was a great patron of platinum jewellery. He was known to have a collection of Platinum wristwatches, chains and cigarette cases. The Maharaja had his remarkably fine collection of emeralds reset into a fine ceremonial necklace composed of seventeen rectangular emeralds including one of 70 carats coming from the coffers of the Sultan of Turkey, with settings of platinum. Cartier and Mauboussin vied with each other for Patiala jewel commissions. The Maharaja of Kapurthala commissioned Cartier to design him a turban ornament or Sarpech consisting of nineteen emeralds of various shapes, brilliants, rose-cut diamonds and pearls; the central hexagonal emerald weighed 17,740 carats.

Yeshwant Rao Holkar, the Maharaja of Indore asked Jean Goulet, of the Parisian jewellery house of Mauboussin, to visit Indore to catalogue and appraise his treasury, a task that took two months to complete. In 1933, Yeshwant Rao appointed Mauboussin as his official jeweller. The Maharajas of Indore had commissioned several fine pieces of jewellery from the House of Chaumet, including the Indore Pear diamonds. 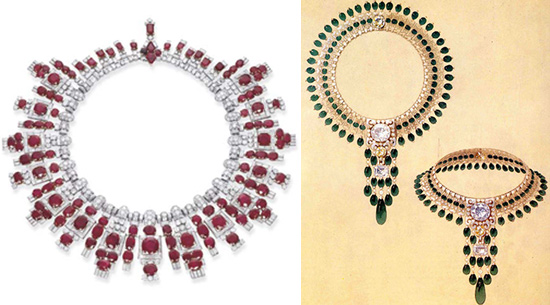 It was these commissions from Indian royalty that sustained most of the European jewellers during the years of Great Depression. It also made a significant cultural impact on the jewellery designs in Europe. The ‘tutti-frutti’ style of platinum jewellery incorporating several Indian motifs and colours became extremely popular. In addition to jewellery, Indian princes were also commissioning cigarette cases, vanity cases, toiletries sets and tongue cleaners in platinum. The romance of Indian royalty with jewellery lasted till 1947. While some of the great collections have been sold by the descendents, some of them can be seen even today. Almost every Royal, Zamindar or a Thikana family has at least one or two pieces of platinum jewellery with them, be it a brooch, earrings or a necklace as their heirloom. Valuable memories of a bygone era- as they say, platinum never loses its lustre, and the romance of royalty and platinum always stays.

This entry was posted on Thursday, January 5th, 2012 at 8:43:03 am and is filed under Precious Platinum. You can follow any responses to this entry through the RSS 2.0 feed. Both comments and pings are currently closed.