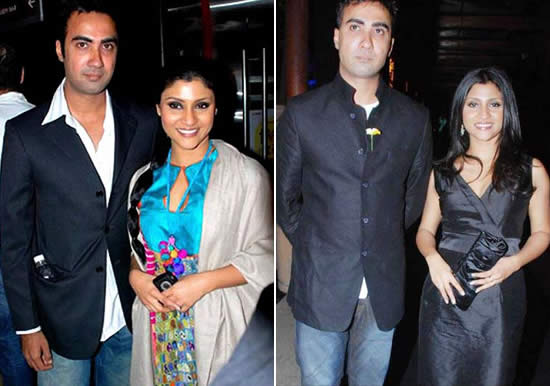 The very talented actors Konkona Sen Sharma and Ranvir Shorey are tying the knot. The couple have been living together for a while, but they have always kept their relationship private; the wedding has not been announced and the hush-hush wedding is at the couple’s residence in Goregaon, Mumbai.

Konkona, 31 is the daughter of journalist Mukul Sharma and noted actress and film-maker Aparna Sen. After graduating from St Stephen’s College, Delhi, Konkona embarked on a acting career in Art and Independent films, and her achievements in the genre have established her as one of the leading actresses of contemporary parallel cinema. Ranvir Shorey spent his childhood in Jalandhar and alongwith his friend and co-star Vinay Pathak he was the host of the hugely successful talk show Ranvir Vinay Aur Kaun. He made his Bollywood debut opposite Manisha Koirala in Ek Chotisi Love Story. He has received acclaim for his roles in Dasvidaniya, Singh is King and Pyaar Ke Side Effects.

Besides being a talented actress, Konkona is also a style icon for those who truly appreciate classic Indian fashion and styles. Often seen in earthy Indian colors, and creations with traditional Indian embroidery, Konkona opened the Amrapali show at the India International Jewellery Week wearing a five-row kundan neck piece, armlet, bangles, earrings and a choker. After the show Konkona was quizzed about what she’d like to wear for her own wedding and she responded: “I’ll wear my grandmother’s jewellery and sarees for my own shaadi”. We’re not sure what Konkona has chosen for her Big Day tomorrow, but whatever be her choices, we’re sure she’ll look gorgeous as always, and we wish both Konkona and Ranvir all luck in their lives ahead!

This entry was posted on Thursday, September 2nd, 2010 at 4:00:35 am and is filed under Celebrity News. You can follow any responses to this entry through the RSS 2.0 feed. Responses are currently closed, but you can trackback from your own site.