Mumbai is talking about Eshita Agarwal’s grand Sangeet at the Taj Mahal Palace where Katrina Kaif was the star performer. Eshita, a Berkeley graduate is the daughter of business magnate MP Agarwal. She is marrying Anish Jain, whose family runs a bullion trading business. The wedding is at the Turf Club tomorrow. 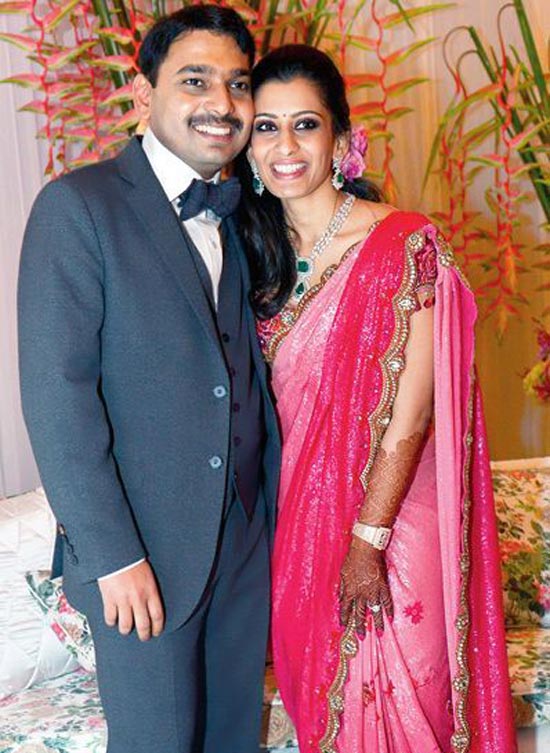 Swapnali and Vishwajeet at their Engagement in Pune this year

Pune is talking about the Bhosale-Kadam wedding on 7th December. Swapnali, the daughter of construction magnate Avinash Bhosale weds Youth Congress leader Vishwajeet Kadam and expected at the finale of the power alliance are over one lakh guests. Percept, the Mumbai-based wedding managers have set up a mini-office at the Bhosale mansion in Pune so co-ordination with their client gets easier. Mrs Bhosale has handpicked some of the best names in wedding decor to style each event. For the Mehndi to be held tomorrow, the decor is being done by Rachana Lucknowala. “Its a small function, 250 guests with an off-beat theme”, says Rachana. “The family has chosen white, with Victorian influences, not traditional or contemporary Indian as is typically the style for Mehndi decor.”

Oops- In one of our earlier posts, we mentioned Akon was in Udaipur for UK NRI Puru Sethia’s sangeet. Sorry, we were wrong. Akon was in Udaipur, but later came to Mumbai for businesswoman Amrita Shahra Sangeet. Amrita’s family who run Ruchi Soya ensured Akon’s Mumbai trip was all hush-hush. When the singing sensation entered the Ballroom of Taj Mahal Palace at midnight, the guests obviously experienced the most pleasant shock. One of them told us: “The decor by Dhun Cordo was spectacular, but the highlight of the evening was Akon’s performance for half an hour.” Akon wowed the audiences for thirty minutes, but at another Sangeet, Katrina scooted off the stage in fifteen minutes. Now you know what Mumbai is also talking about.

This entry was posted on Tuesday, December 4th, 2012 at 7:50:39 am and is filed under Celebrity News. You can follow any responses to this entry through the RSS 2.0 feed. Both comments and pings are currently closed.