Remember Parker: He’s the guy played by Justin Timberlake in The Social Network. The founder of Napster and founding President of Facebook Sean Parker tied the knot with Alexandra Lenas, a New York based singer and song writer at the spectacular Ventana Inn in Big Sur, California. The bride wore an Elie Saab gown and the groom a fine ensemble selected by Academy Award-winning costume designer Ngila Dickson. 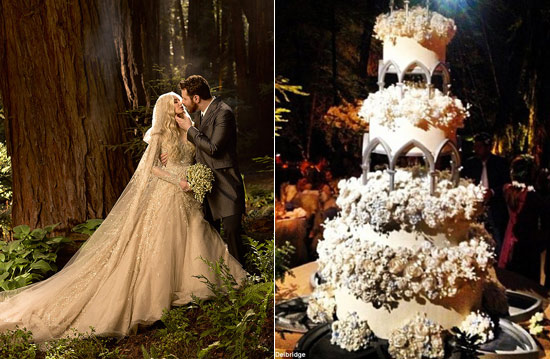 Just Married, The couple’s wedding cake in the forest setting

– It was a lavish ceremony which according to reports cost over $10 million.

– The venues included two terraces that are used for weddings that offer ‘privacy and an uninterrupted 50-mile view of the Big Sur coastline to the South.

– The Napster creator, estimated to be worth $2 billion, spared no expense to create the most magical settings, and a landscaping firm built fake ruins, waterfalls, ponds and brides.

– Guests enjoyed cake from Napa Valley bakeshop Perfect Endings and danced to tunes by Loreena McKennitt and The Good The Bad & The Ginger.

– The flowers, reportedly worth $1 million, were designed by award-winning event designer Preston Bailey.

– Among the 300 guests were Sting and his wife Trudie, Allison Williams, Emma Watson, and Newark Mayor Cory Booker.

This entry was posted on Friday, June 7th, 2013 at 1:09:50 am and is filed under Celebrity News. You can follow any responses to this entry through the RSS 2.0 feed. Both comments and pings are currently closed.