Nick Lachey has married his girlfriend of five years Vanessa Minnillo with a set of platinum wedding bands. The former 98 Degrees star exchanged vows with Minnillo, an actress and model, in a private ceremony on Sir Richard Branson’s private Necker Island in the British Virgin Islands. Speaking to People magazine, New York jeweller David Bader revealed the details behind the couples platinum wedding bands. He told the news provider: “Vanessa was definitely looking for a ring to match her engagement ring. [For Nick] I wanted something huskier and thicker. “They both wanted a substantial looking ring with diamonds, but Nick wanted his to be masculine at the same time.” Minnillo had a platinum eternity band of Asscher-cut diamonds, while Lachey has a platinum band with 24 square cut diamonds. 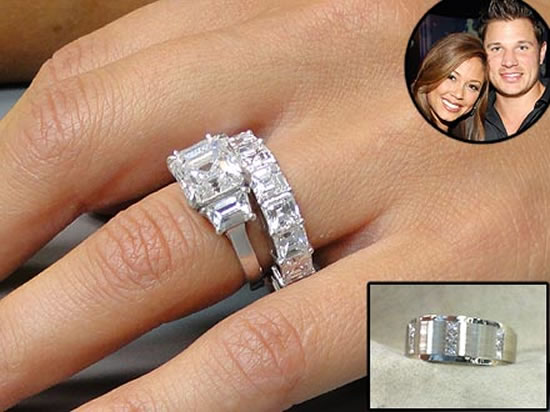 This entry was posted on Monday, August 8th, 2011 at 11:06:37 pm and is filed under Bridal Fashion and Beauty, Precious Platinum. You can follow any responses to this entry through the RSS 2.0 feed. Both comments and pings are currently closed.