While a wedding lasts a few days, its memories last a lifetime for the couple and their loved ones. Elements like decor and ambiance go a long way in making matrimonial festivities unique, and that’s where WeddingSutra Favorite- Prasang Events made a difference at a lavish four-day Ahmedabad wedding. Another WeddingSutra Favourite- Priyam Parikh Pictures captured all the big and beautiful details and intimate emotions in beautiful frames. 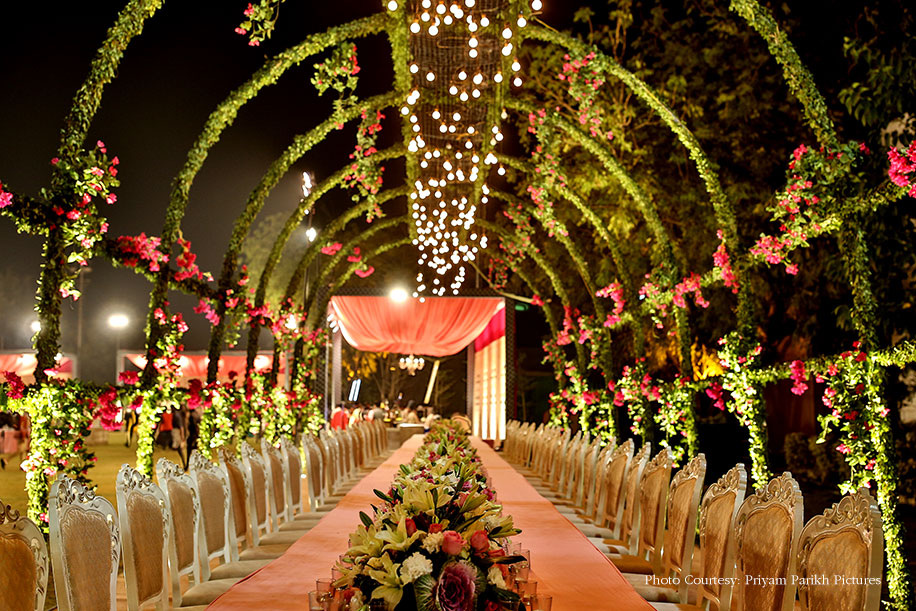 The affair was planned to perfection over four months and the teams invested a lot of time in brainstorming ideas and customizing concepts to meet the couple’s tastes. Taking us through the journey, Keyur Patel says, “We were told that this wedding had to be unlike anything anyone had ever seen before which got us thinking creatively about every aspect.”

The process, however, didn’t come without hurdles as less than a month before the wedding, the team had to re-evaluate their plans. “Just weeks before the wedding, the family notified us about a change in plans because of personal reasons which meant that the budgets and scale of the celebrations had to be scaled down.” However, they stood by the family and managed to pull off impressive events that were magical and memorable for all. 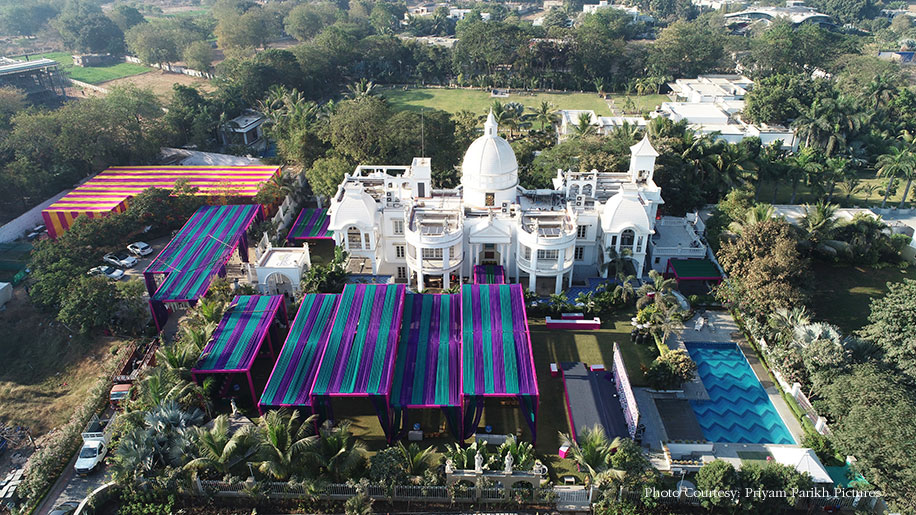 The mehndi was inspired by the exotic colors of Morocco. The event was hosted at the bride’s home and combined richly colored drapes with golden lamps and mosaic patterns. Keyur Patel says, “This was the first event, and we wanted to ensure that it set the right tone. The highlight here was the WishTree, where guests could leave their messages for the couple.”

The live stations at the mehndi impressed all! “We organized counters where we had garland makers from Maharashtra who crafted floral hairpieces for the ladies in front of their eyes. We also invited ethnic shoe sellers and bangle makers from Jaipur who crafted their products at the event which guests could take away as favors.” The day was followed by a ghazal night where guests enjoyed soulful music. 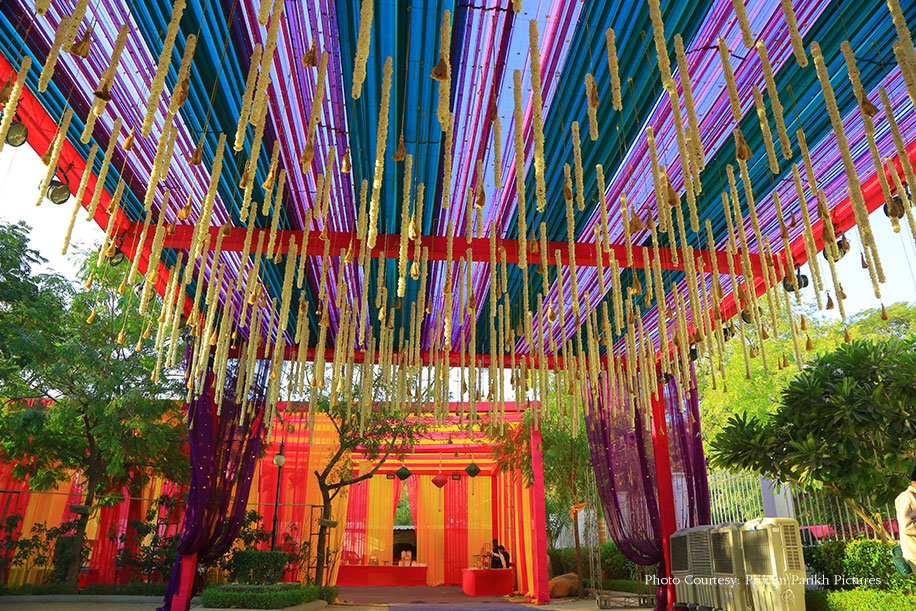 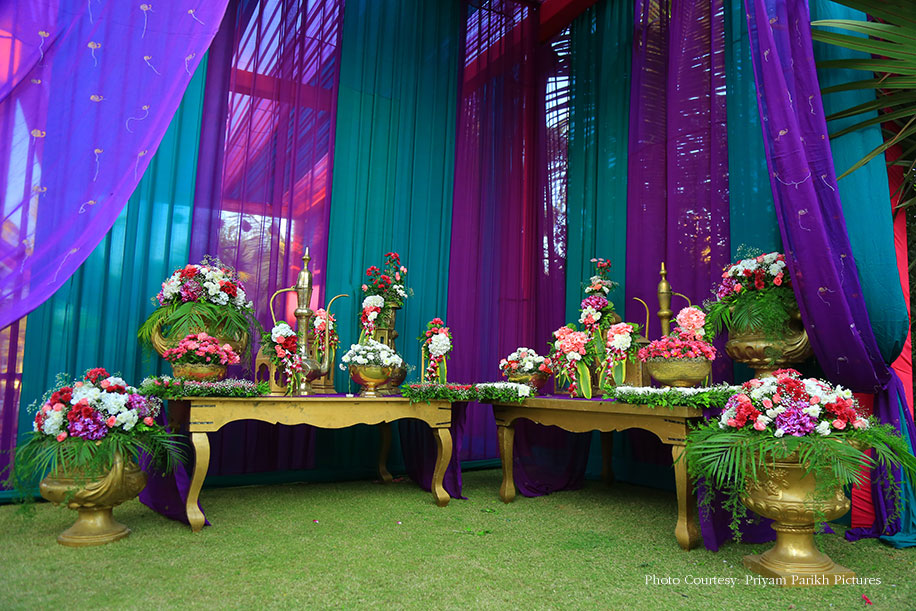 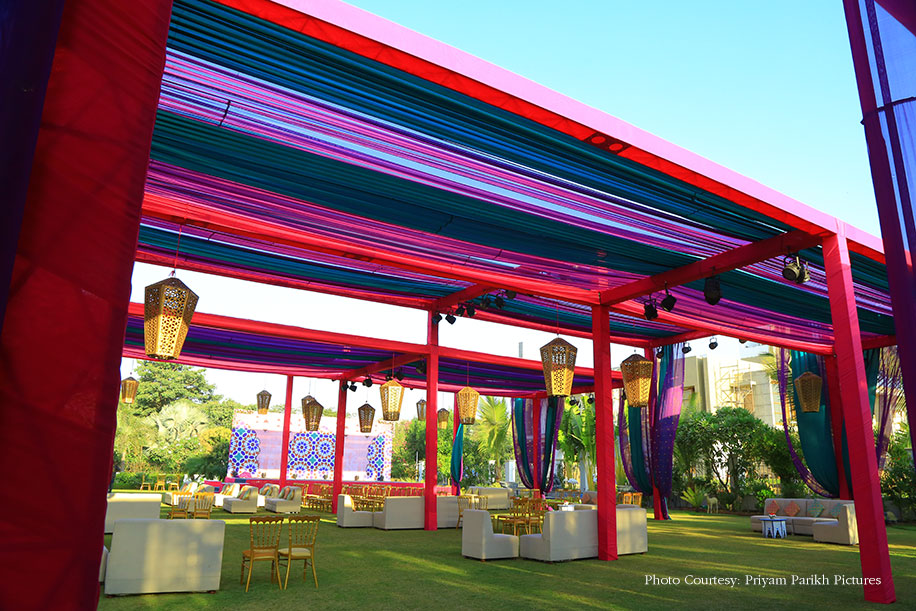 The following day saw the sangeet being hosted in style. This function was all about contemporary elegance and incorporated a black, gold and white color scheme. String art decor forming geometrical patterns decorated the vast spaces and created a striking visual impact. “The idea was to give this event a unique look. We wanted it to be glamorous and modern at the same time, so we created life-size installations with ribbons and lit the spaces with lots of fairy lights. We also brought in yellow power cans which were placed strategically to create interesting contrasts with shadows,” says Keyur. The event was made even more spectacular thanks to a riveting performance by singer Neha Kakkar. 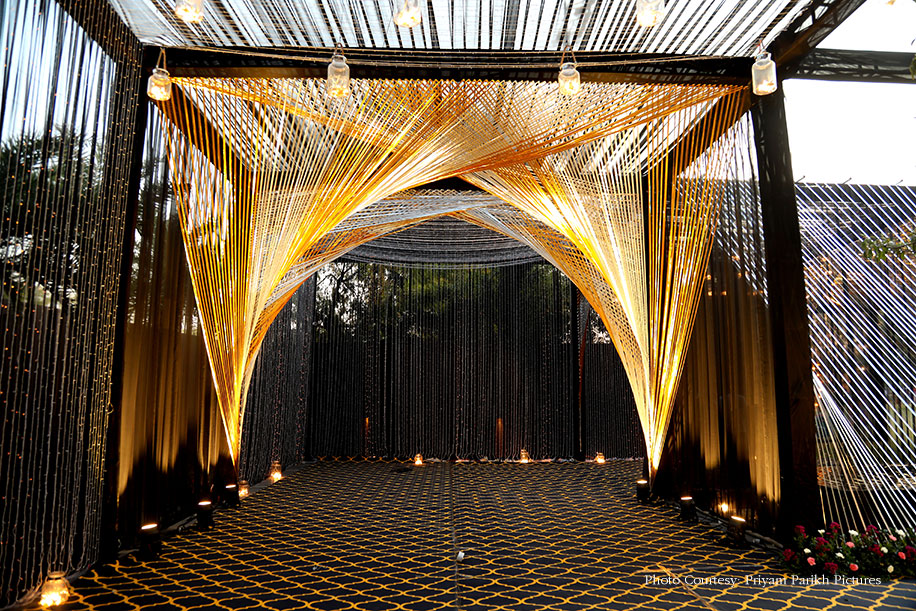 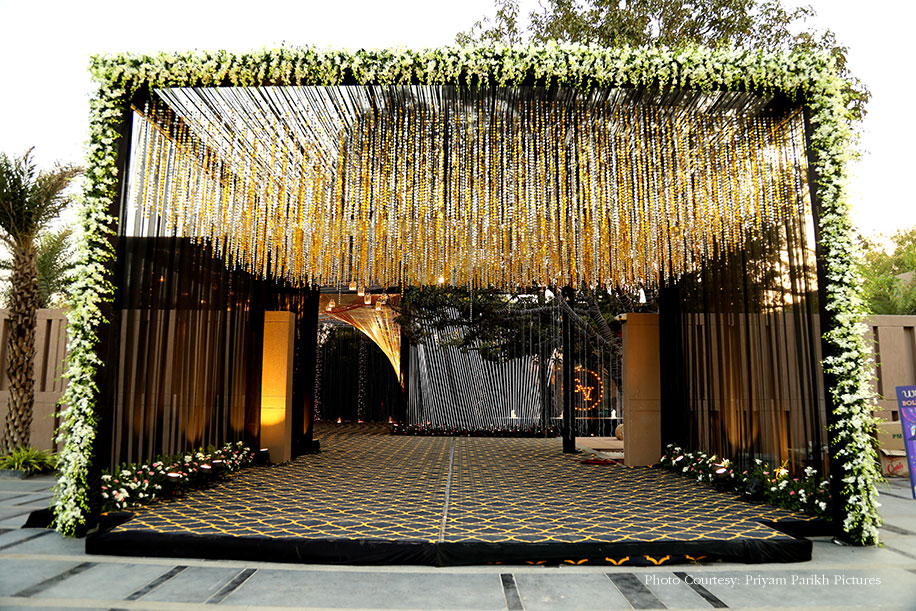 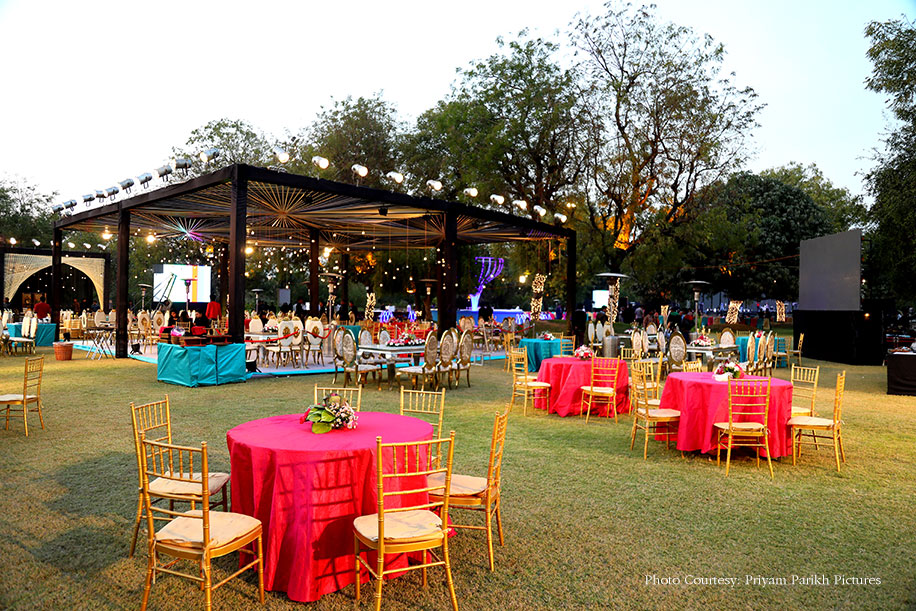 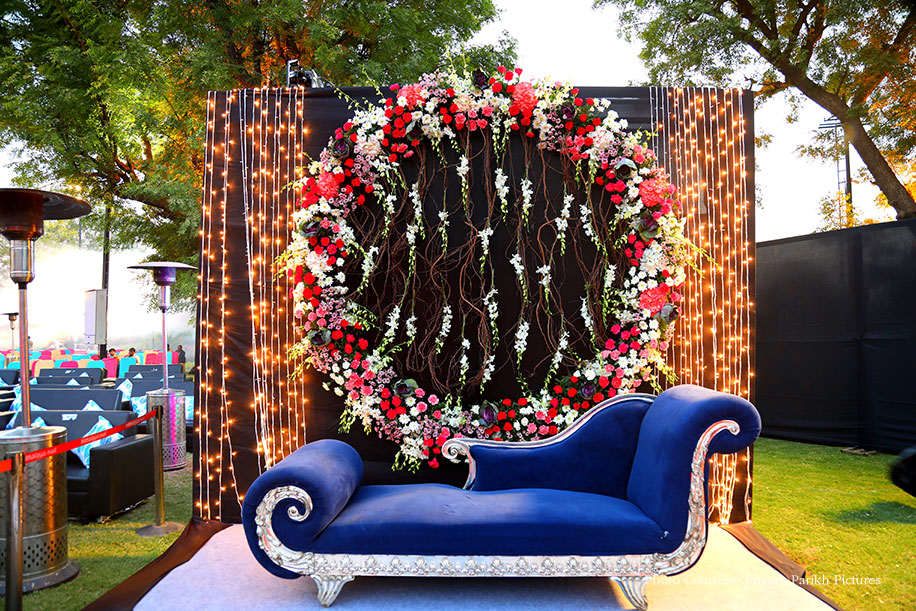 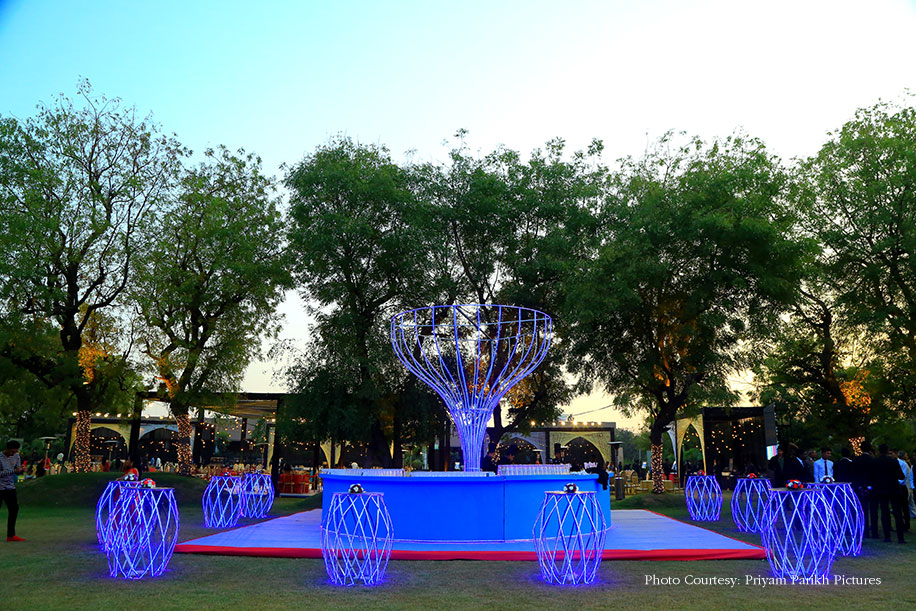 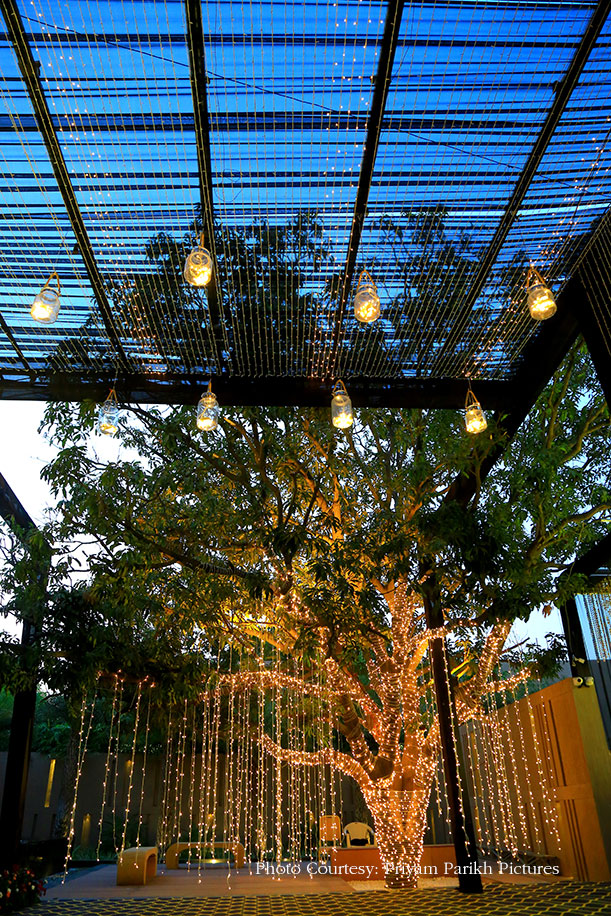 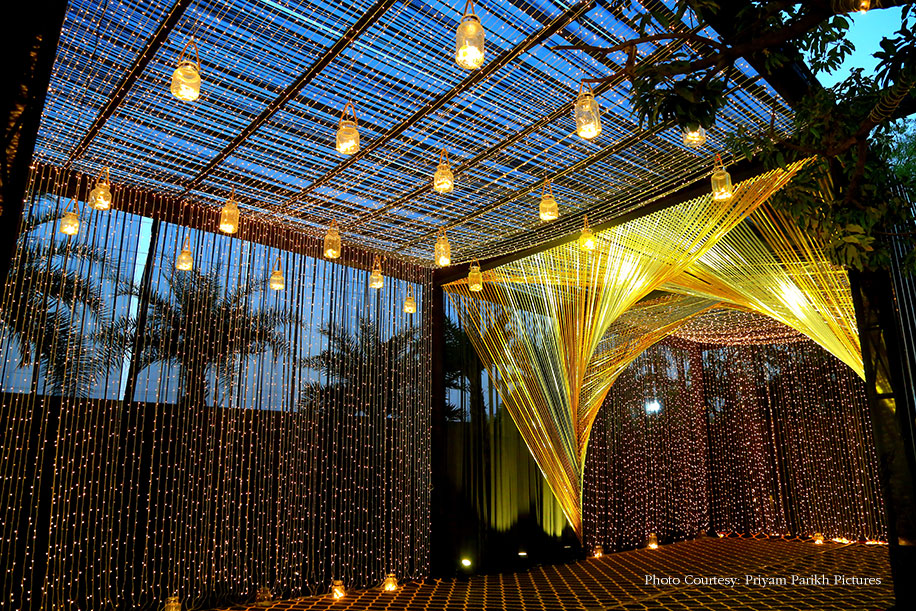 Regal Indian aesthetics made for a classic wedding setup, and for the wedding ceremony, Prasang Events used red and gold elements to transform the grounds and create a palace-like setting. A large elephant structure covered in mirrors, chandeliers, and fragrant flowers set the stage for a memorable event. Sharing the inspiration behind the setup, Keyur shares, “The couple’s wedding was a traditional affair, and the mandap was the highlight at the event. A large golden structure, it was decorated with sevanti blooms, roses, gulchadis along with rajnigandhas, and around this, we created an amphitheater-style seating that could easily accommodate up to 600 people. The rituals commenced with a Ganga Aarti with 21 pandits chanting the mantras which added a spiritual touch to the celebrations, and as the evening continued, Nayan Pancholi kept everyone entertained with the lagna geet in his beautiful voice.” 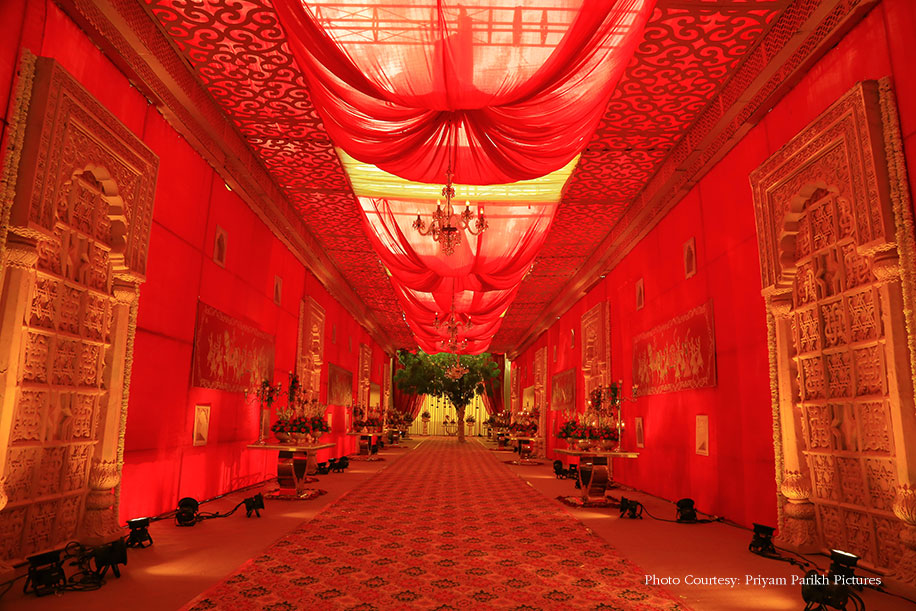 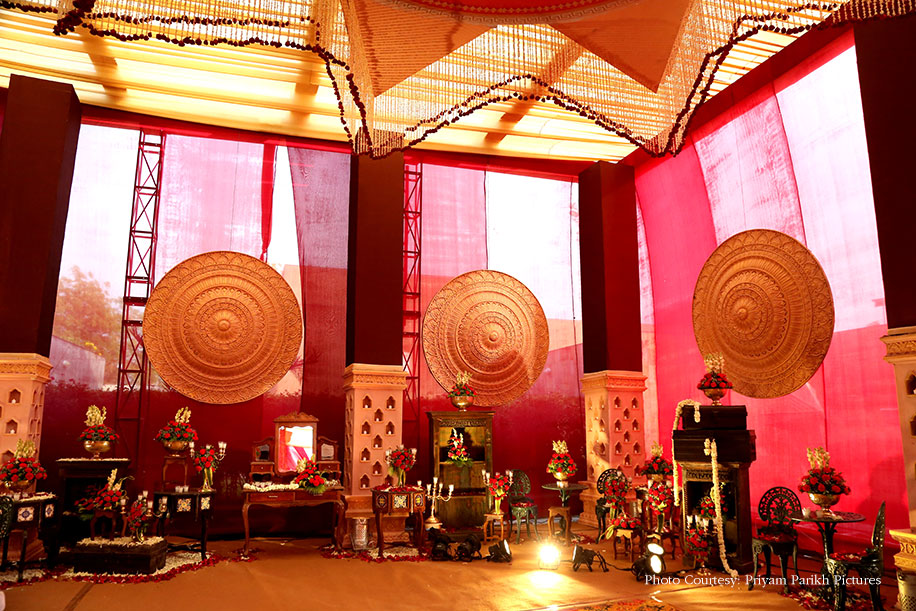 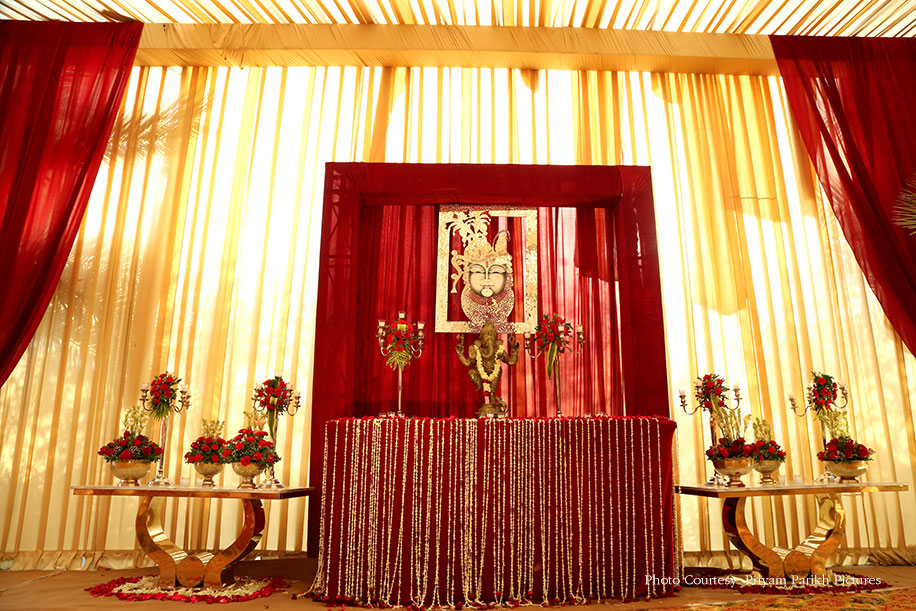 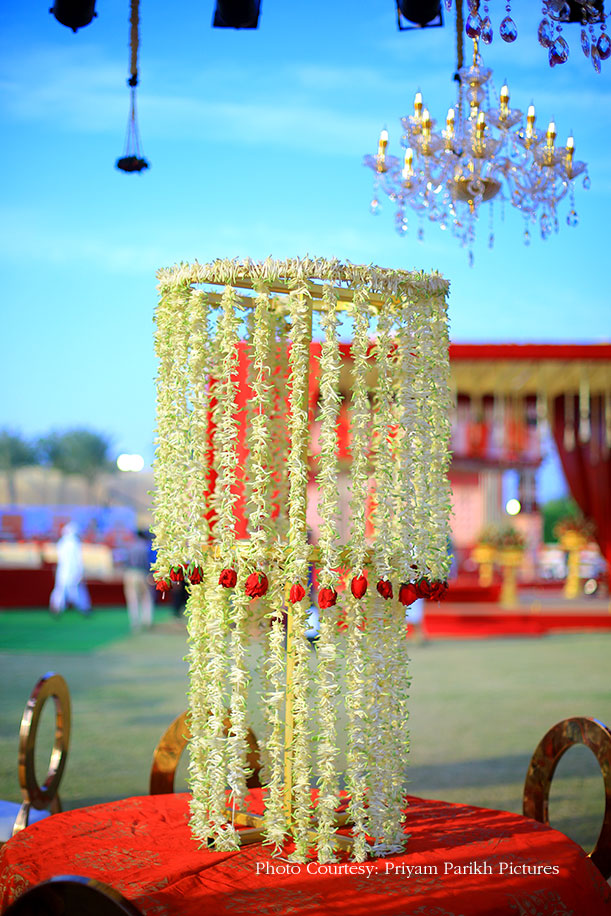 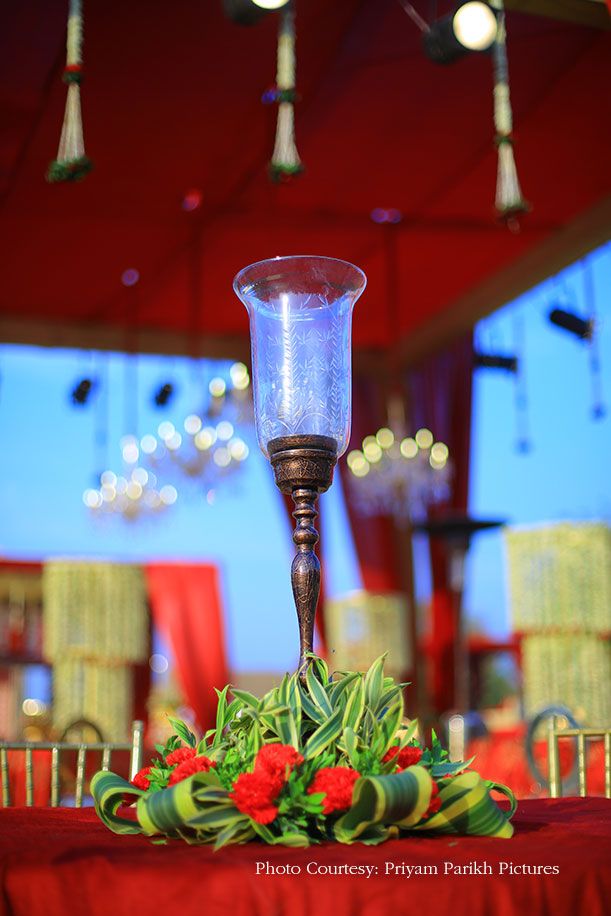 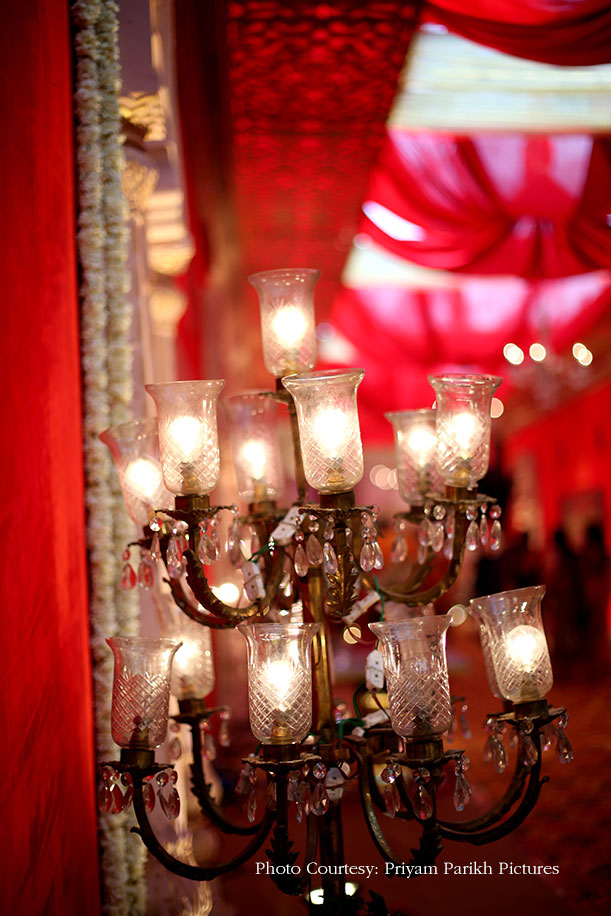 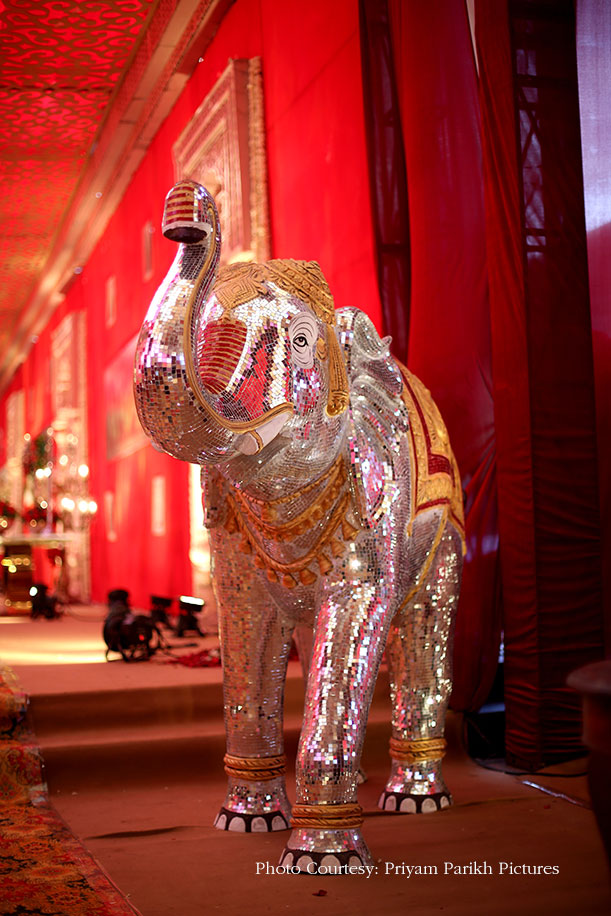 The grand and elegant reception was resplendent with flowers and foliage. “Almost every element used as part of the decor, including the stage, was enveloped in different varieties of flowers such as hydrangeas, gypsophilas, orchids, carnations, and roses,” says Keyur Patel. “While the use of flowers added a sense of softness to the occasion, the glow of chandeliers enhanced the romantic vibe. 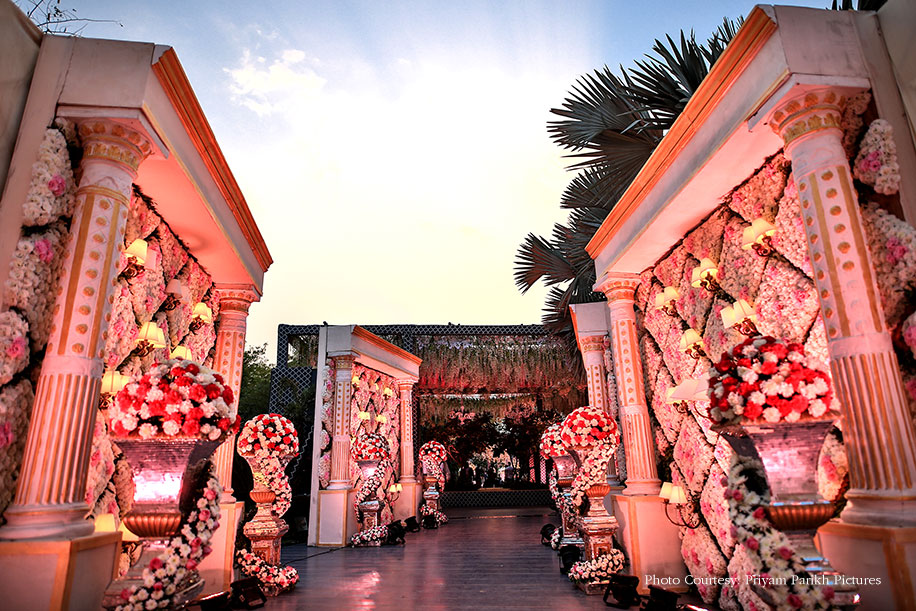 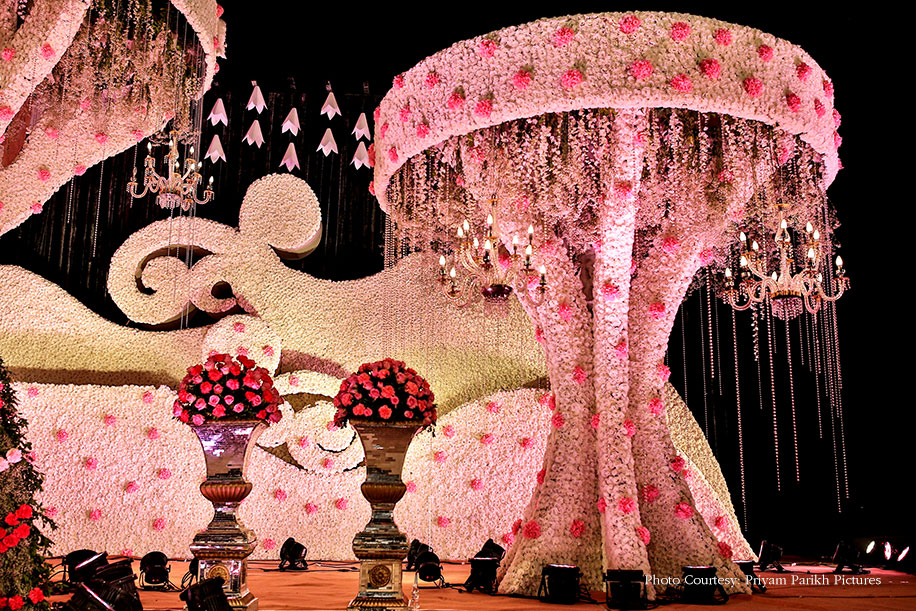 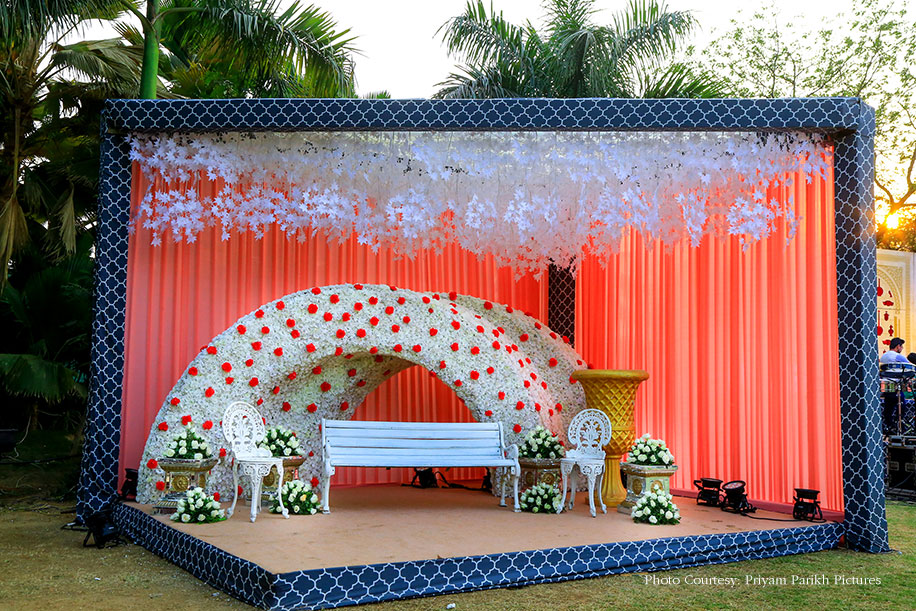 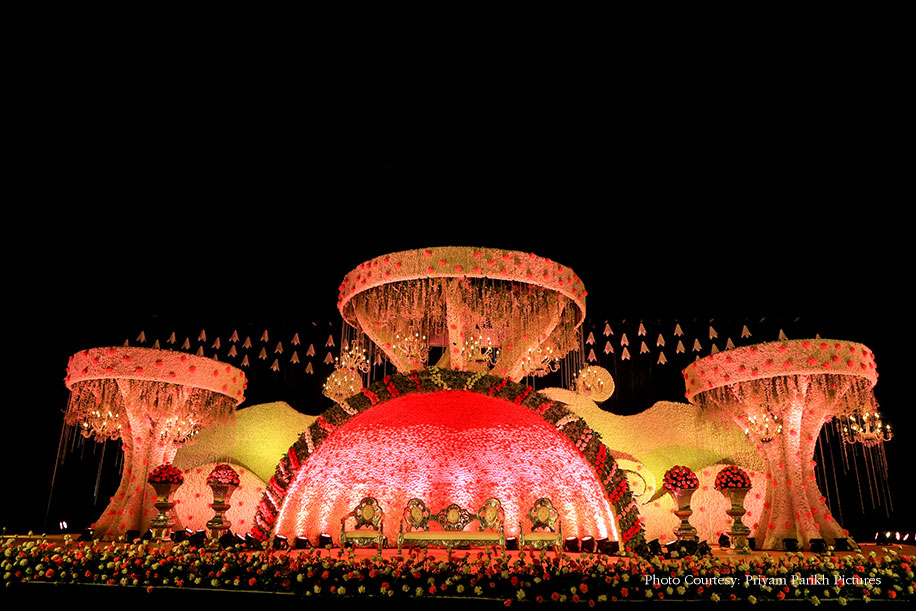 This entry was posted on Friday, June 28th, 2019 at 5:52:58 pm and is filed under Wedding Planning. You can follow any responses to this entry through the RSS 2.0 feed. Both comments and pings are currently closed.