The buzz has moved from Sonam Kapoor to the proposed Ambani nuptials as India’s luxury wedding makers vie for a piece of business.

It’s dubbed as the celebration which is going to be the wedding of 2018! But naturally- the bride-to-be is Shloka Mehta, daughter of diamond magnate Russell Mehta, and the groom Akash Ambani, son of India’s richest man Mukesh Ambani. There has been no official announcement on the alliance from either family, but the pink papers have quoted closest friends and company officials who have confirmed that Shloka and Akash, former classmates at Dhirubhai Ambani International School, are tying the knot in November or December this year. There’s speculation that the engagement will take place in March or April at Antilia (the Ambani residence) or at The Oberoi, Mumbai (Nita Ambani is on the board of The Oberoi Group). 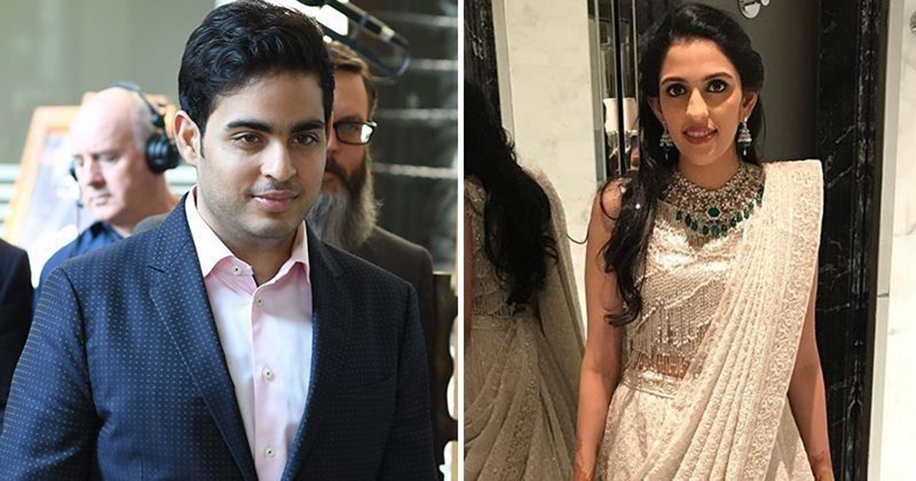 Mukesh and Nita Ambani with Akash, Isha and Anant Ambani. Russell and Mona Mehta with Shloka, Diya, Viraj and his wife

Akash and Shloka
Akash and his twin sister Isha are the eldest of the three children of Nita and Mukesh Ambani. Akash is on the board of Reliance Jio, the group’s fast-growing telecom venture.

Shloka is the elder daughter of Mona Mehta and Russell Mehta, who heads Rosy Blue Diamonds, formerly known as B. Arunkumar & Co. After finishing schooling at the Dhirubhai Ambani International School in 2009, Shloka went on to study Anthropology at Princeton University and completed her Masters in Law at The London School of Economics and Political Science. Currently, she is a director at the Rosy Blue Foundation and a co-founder of ConnectFor, which matches volunteers with NGOs that need them.

The Buzz
It all started after Nita and Mukesh Ambani attended Shloka’s sister’s wedding at the Four Seasons Hotel Bahrain Bay and Ritz Carlton Bahrain in April last year. And word spread that the Ambani clan were there not just as friends of the Mehta family, but as their soon-to-be ‘samdhis’ (in-laws).

Nita and Mukesh Ambani are known to orchestrate the most magnificent parties or pre-wedding celebrations for their family members/ friends at their private residences, but this will be the first wedding they will be organizing and there’s a lot of curiosity on their preferred locations. And while event professionals have vied to have Nita and Mukesh Ambani as their clients, Mona and Russell Mehta are the darlings of Mumbai’s top luxury wedding makers. Both are known to have the finest tastes in food, decor, and entertainment, with a passion for exemplary hospitality. This will be the third wedding they will be organising as Shloka’s siblings are both married – Viraj wed in Mumbai and Diya in Bahrain.

According to sources, in all likelihood, Akash and Shloka will tie the knot in Mumbai only- with the celebrations spread between the Mehta residence, Ambani homes – Antilia in Altamount Road and Sea Wind in Cuffe Parade, The Oberoi in Nariman Point and the Jio Gardens at Bandra Kurla Complex (BKC). Guests of the Ambani family will be hosted at The Oberoi and Trident Hotels in Nariman Point and Trident, BKC. Travel agents and hoteliers all over Mumbai are bracing up to manage the surge in demand, as all rooms in these three hotels will be unavailable a week pre and post the wedding dates.

How Billionaire Weddings Work
When there is a wedding in a billionaire family, typically the family offices or their in-house event coordinators reach out to their most trusted wedding makers to set up meetings for information and ideas- these include not just wedding planners but couturiers like Manish Malhotra and Abu Jani & Sandeep Khosla who sometimes play key roles in orchestrating the theme for each of the celebrations.

While Manish Malhotra, Tarun Tahiliani and Abu Jani & Sandeep Khosla are the favorite couturiers, the go-to event managers/wedding planners include WedNiksha, Cineyug, Seven Steps, WedGuru and Tamarind Global. The favorite scenographers/ decor designers include Sumant Jayakrishnan and Vandana Mohan from New Delhi and, Gurleen M Puri and Dhun Cordo from Mumbai. Others on the list of the billionaire club include food consultants/caterers Foodlink from Mumbai and Ritu Dalmia, Indian Accent, Puneet Sikand and Maruti Sikka from New Delhi; and invitation card designers EDC and Uttara Shah.

Typically, the management of a billionaire wedding involves extensive coordination between the host families and their in-house teams and all the luxury wedding makers. Often, there are multiple wedding planners and event managers entrusted with specialized responsibilities for different celebrations. These could include hospitality management for the bride or groom’s guests, travel coordination/ticketing for guests traveling from overseas, decor and event production as well as artist management for live entertainment or international acts.

The proposed Ambani-Mehta nuptials is slated to be the biggest yet, in terms of budget, scale, concepts and a power-packed guest list. Watch this space as we reveal who is in on the action as planning this billionaire wedding extravaganza gets underway.

This entry was posted on Monday, March 12th, 2018 at 9:54:59 am and is filed under Celebrity News. You can follow any responses to this entry through the RSS 2.0 feed. Both comments and pings are currently closed.