The Magic of Paris 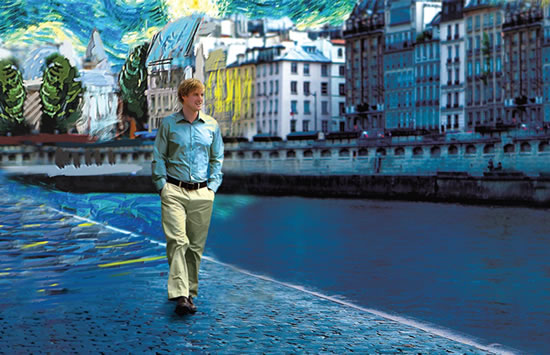 I have an admission to make. I love Woody Allen movies. If we can separate the person that he is with the movie maker in him, he is the greatest tour guide in the world. He made us fall in love with New York and now with ‘Midnight in Paris’ he has given the same wonderment and magic that Ernst Hemingway brought to this most beautiful city in the world in his book ‘A moveable feast. So come along with us and fall in love with Hemingway and Gil Sander’s Paris as we look at some of the most breathtaking locations from ‘Midnight in Paris’! 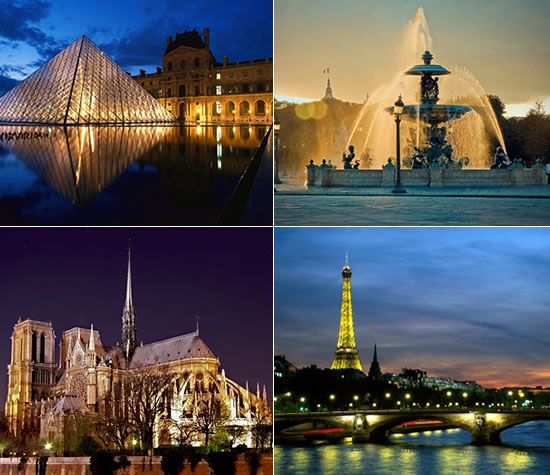 The movie opens with a magical montage of picturesque Paris – you see the beautiful landmarks, the views at night and day, in the rain and bright sunshine, in winter and in summer. Sheer poetry. 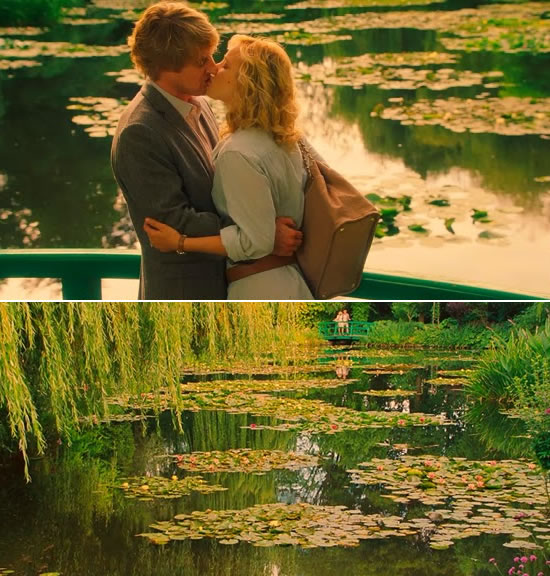 The movie opens with Gil (Owen Wilson) and Inez (Rachel MacAdams) at Monet’s gardens in Giverny where Gil contemplates changing his life while Inez frets about returning to the city in time for dinner with mom and dad. Located just 80 km west of Paris, Claude Monet’s gardens at Giverny is a wonderful day trip from Paris. Enjoy a day strolling through the landscape that inspired Monet, and then head back to Paris to see the paintings he created just like Gil and Inez do in Midnight in Paris. 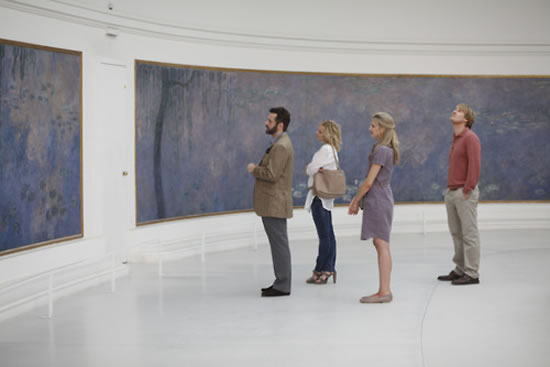 Gil and Inex visit the Musée de l’Orangerie with John and Carol, friends of Inez from America and admire Monet’s mesmerizing Les Nymphéas paintings inspired by the gardens at Giverny. Housed in the former Orangery of the Tuileries Gardens in paris, Les Nymphéas, a series of eight murals took Monet four years to complete. 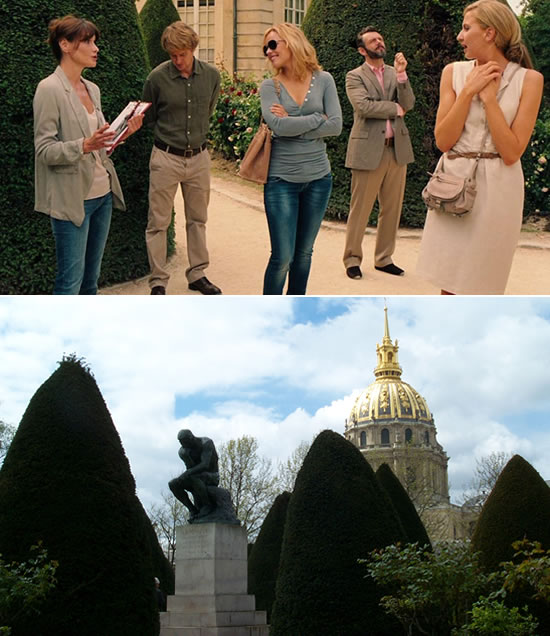 Gil and Inez also visit one of our favorite spots in the 7th arrondissement, the Musée Rodin, set in a beautiful 18th-century mansion where the artist lived and worked. The peaceful gardens, famous for the varieties of roses, form a lovely backdrop to Rodin’s sculptures on display.

Palace and Gardens of Versailles 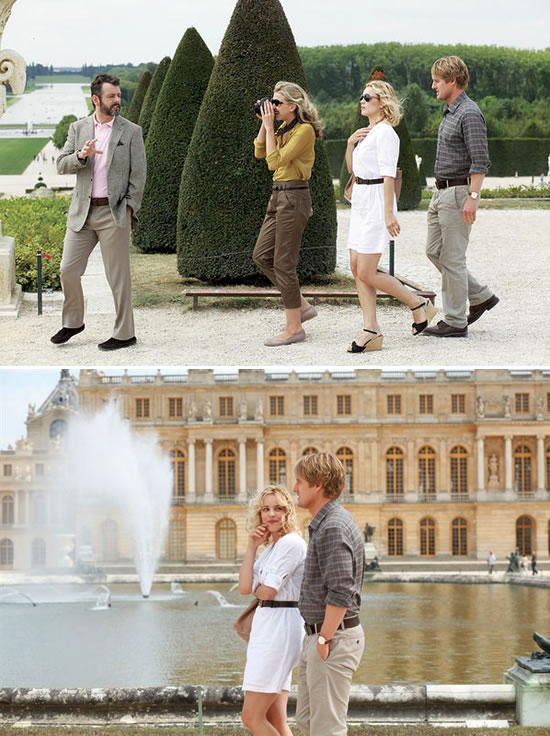 The two couples make a day trip from Paris to the Chateau de Versailles. Only 20 km southwest of Paris, the Palace of Versailles once housed Louis XIV and 20,000 of his courtiers. It is one of the grandest royal palaces ever built with grand salons and exquisite gardens.

This is the hotel where Gil and Inez stay – the luxurious five star Hôtel Le Bristol in the 8th arrondissement, and if you must know, in the Panoramic Suite. Located on the rue du Faubourg Saint Honoré, famous for its fashion boutiques and art galleries, you’re also only a few feet away from the sights, shopping and cafes of the tree-lined Champs-Elysées. Place de la Concorde, the Louvre, and Orsay are a short walk or taxi trip away. Steeped in history, this hotel has attracted a host of celebrities like Coco Chanel, Marilyn Monroe, Charlie Chaplin and Picasso since it opened doors in 1920s. 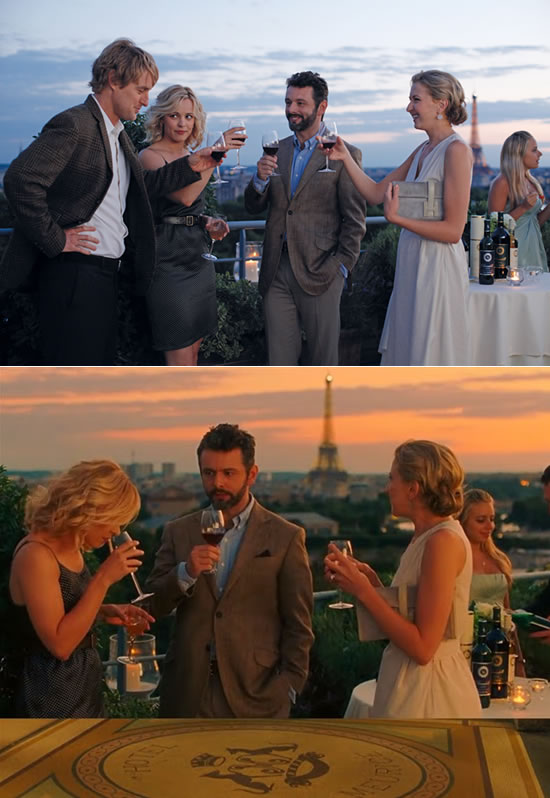 Remember when Gil, Inez, Paul and Nina enjoy a wine-tasting on a terrace of this gorgeous hotel with Eiffel Tower in the background? Shot on the terrace of the Belle Etoile Royal Suite at Hotel Le Meurice that costs more than 17,000€ a night, this suite is Parisian luxury at its finest. 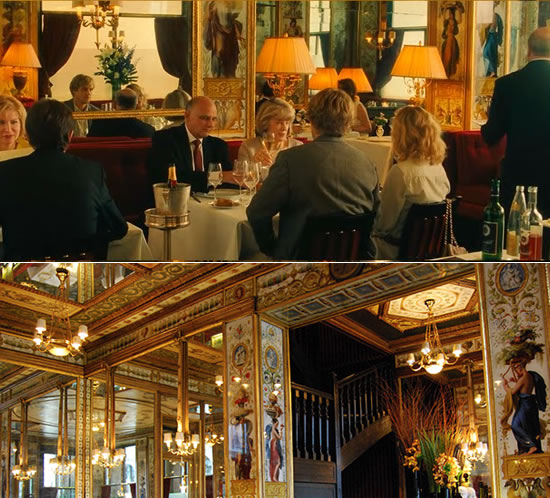 Its hard to match the grandeur and 18th-century Parisian glamour of Le Grand Vefour, the restaurant Woody Allen chose for a lunch scene with Gil, Inez and her parents. Located in the arcades of the lovely Palais Royal in the 1st arrondissement, Le Grand Véfour has been a Parisian institution for over 200 years. Psst, even Julia Child dined there, and even now its a privilege to dine there. 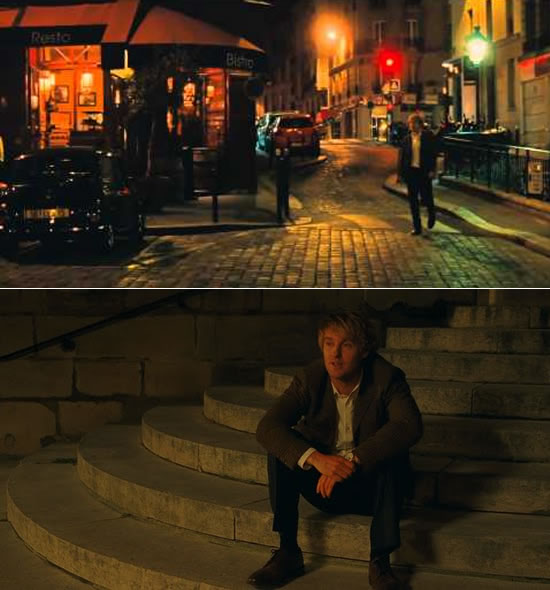 This is where Gil’s adventure into the Paris of the 1920s begin. Sitting on the steps of the church Saint Etienne-du-Mont near the Panthéon, on the softly lit Rue Montagne St. Genevieve, a vintage car pulls up and takes him back in time into the Paris of his dreams. 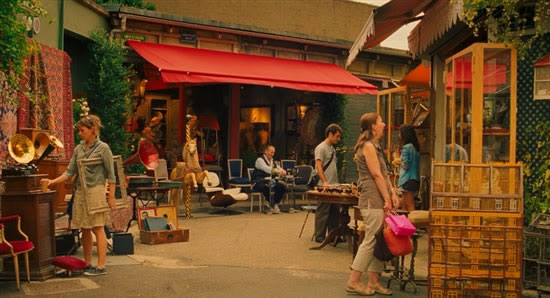 It is in this eclectic flea and antiques market that Gil meets Gabrielle and buys a record from her. Its such a whimsical and romantic place, you can spend hours rummaging for treasures together. 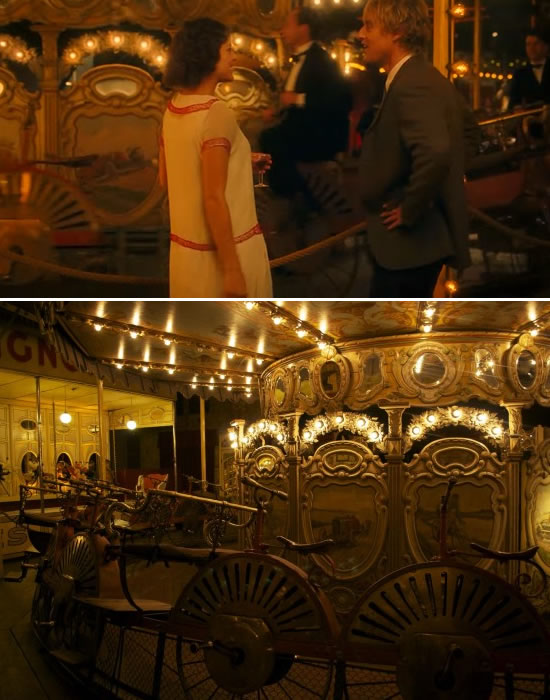 Back in the 1920s Gil goes to a fairground party where he meets with Adriana (Marion Cotillard) once again. This is shot in the Musée des Arts Forains – the Museum of Fairground Art, which has an extensive collection of antique merry-go-rounds and carousels, German swings, hundred-year-old bicycles, and other antique amusement rides. La Vie Romantique.

Considered the most beautiful bridge in Paris, it connects the Champs- Élysées and Eiffel Tower quarters. And this is where Gil meets Gabrielle again and offers to walk her home in the rain. This is the magic and romance of Paris.

And if you are ready to book your romantique Parisian trip, call Mercury Travels for more details

This entry was posted on Wednesday, February 29th, 2012 at 1:45:49 am and is filed under Travel & Honeymoon. You can follow any responses to this entry through the RSS 2.0 feed. Both comments and pings are currently closed.